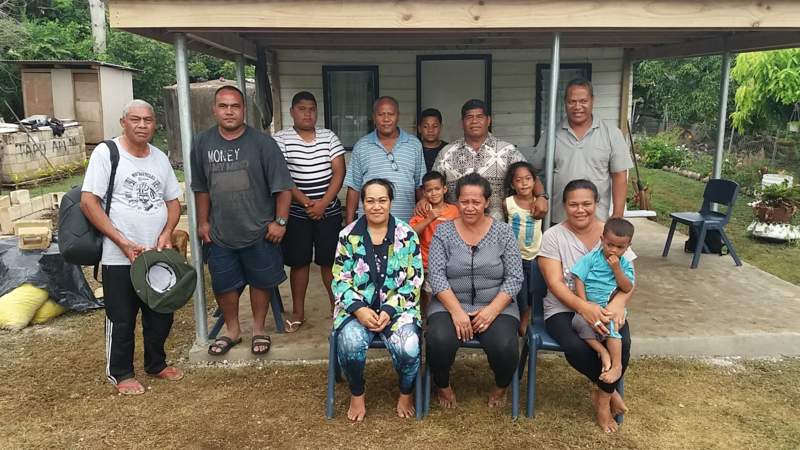 Tonga has borne the brunt of a huge undersea volcanic eruption

The South Pacific nation of Tonga has been devastated by a volcanic eruption and subsequent tsunami hitting the shore.

Kilometres underwater, the 15 January explosion ripped apart a deep-sea internet cable – severing the only cord of modern communication connecting 100,000 people to the rest of the world.

On the streets of the main island Tongatapu, blue skies filled with ash clouds and the loud bangs of the earth cracking open.

Many terrified locals began to pray.

The details of the Hunga-Tonga-Hunga-Ha’apai explosion are, after all, on a biblical scale.

And Tonga is a very devout nation, with most Tongans belonging to a Christian church.

Statistics from a 2016 census show about 19% belong to the Church of Jesus Christ of Latter-Day Saints, also known as the Mormons – the fastest growing religious group on the island.

The US religious group has been a big presence on the islands for over a century, since Western missionaries reached its shores. Per capita, the Mormons say Tonga has the highest number of its members.

And the wealthy Church, with 174 congregations in the community, says it has taken a prominent role in offering essential shelter and resources to Tongans in the aftermath of the disaster.

Church is an integral part of island life for many locals. All shops and businesses are closed on Sunday in keeping with the day of rest.

But last Sunday, locals were thrust into a state of crisis after the huge natural disaster. The morning after saw soot raining from the sky, leaving a “black film of black volcanic ash across the land”, according to the Church on its website.

The Church’s most senior ecclesial figure on the island, Elder Inoke Kupu, said: “There is only one colour in Tonga right now, and that is a dark dust.”

In the first few days after the eruption, Tonga remained largely cut off from the outside world.

The few channels of information came from the diplomatic missions of Australia and New Zealand, and the Church of Jesus Christ of Latter-Day Saints.

The Church’s chapters in New Zealand say they’ve been getting all their information from daily satellite phone calls with Elder Kupu, who’s been leading the Church’s aid and recovery effort on the main island, Tongatapu.

“Drinking water is the immediate need,” the Church said in its update, echoing what the Red Cross and others have been saying.

It’s reported that about 1,000 people have been taking refuge each night at Liahona High School, one of six Church schools on the island.

“People are sleeping in schools and churches and then going back during the day to clean up their homes and sweep,” Richard Hunter, a spokesman for the Church based in New Zealand, told the BBC.

“There have been a few less people each night, as more people are staying at their homes, but still, people are relying on that function of the church,” he said.

The organisation has also handed out thousands of masks to residents to help them breathe amid the blanket of ash.

Early on in the pandemic, the Church said it had secured a store of 50,000 masks in anticipation of Covid spreading to the remote nation. Instead, Tonga was hit by a different wave. The tsunami waves – some up to 15m high – have caused significant destruction to many coastal areas.

In the immediate aftermath of the eruption, all efforts were still on the scramble to locate people. While phone communications on the main island had been restored, there was still no way of getting in touch with the outer islands.

Two Tongan government naval vessels had set off from the capital Nuku’alofa to the outer islands. The Church reported one of its senior leaders were on board.

The Church – known for its global missionary programme – says it has about 135 Tongan missionaries stationed in those outer islands. While they’ve been able to make contact with some, there are still many unaccounted for, the Church said.

But some encouraging news had emerged already, including “one happy story” of survival from Tuesday, Mr Hunter said.

The tiny island of Atata – which has a population of fewer than 100 people – had been flagged by New Zealand and Tongan government authorities as one of the islands of greatest concern as it was closer to the explosion.

Almost all of the homes on the island were destroyed when the volcano erupted. But everyone managed to get to the Church’s chapel house in time, which reportedly survived.

“Everyone on the island stayed in the church building and were safe, but every other building we understand was destroyed, except for this one in the middle of the island,” Mr Hunter said.

He said the Church’s properties are built “as strong as we can build them”, because “we know we’re in a dangerous part of the world where a cyclone or tsunami can come through every few years or so”.

“So our members know they can go to their nearest church when the wind is very strong, to take refuge from the storms of life” – in this case, both in a spiritual and physical sense.

New Zealand authorities confirmed on Wednesday that the residents on Atata had been successfully evacuated to Tongatapu island.

Mr Hunter said additional air cargo shipments of water, masks and phones are also on the way from the Church’s chapters overseas, but like the official aid being sent by governments and the Red Cross, it’s being held up by the damage to Tonga’s air and sea ports.

“Church leaders continue to liaise with government officials so the Church can support humanitarian efforts in the coming days and weeks,” the Church wrote on its website.

“Church services this coming Sunday will be home-based and Latter-Day Saints will be invited to fast and pray, to give thanks for the many lives which have been preserved, and to plea for a return to normality.”