This Christmas weekend the country will be spilt in two, with dry and warm conditions in some areas and wet and unsettled conditions elsewhere.

Some towns could be hit with 200mm of rain on Christmas Day alone.

“A low pressure trough across northern Australia and a high in the [Great Australian] Bight and that will determine who will have sunny and dry weather at Christmas and who will be hearing the rumble of thunder”.

But one thing is for sure – after we’ve scoffed on turkey, ham and prawns Australia will be hotting up.

“Temperatures are slowly climbing which means by Boxing Day it is going to be a very hot through South Australia with temperatures nudging the 40C mark for the first time in two years,” said Ms Osborne.

“It’s going to be a hot start to the Boxing Day test.” 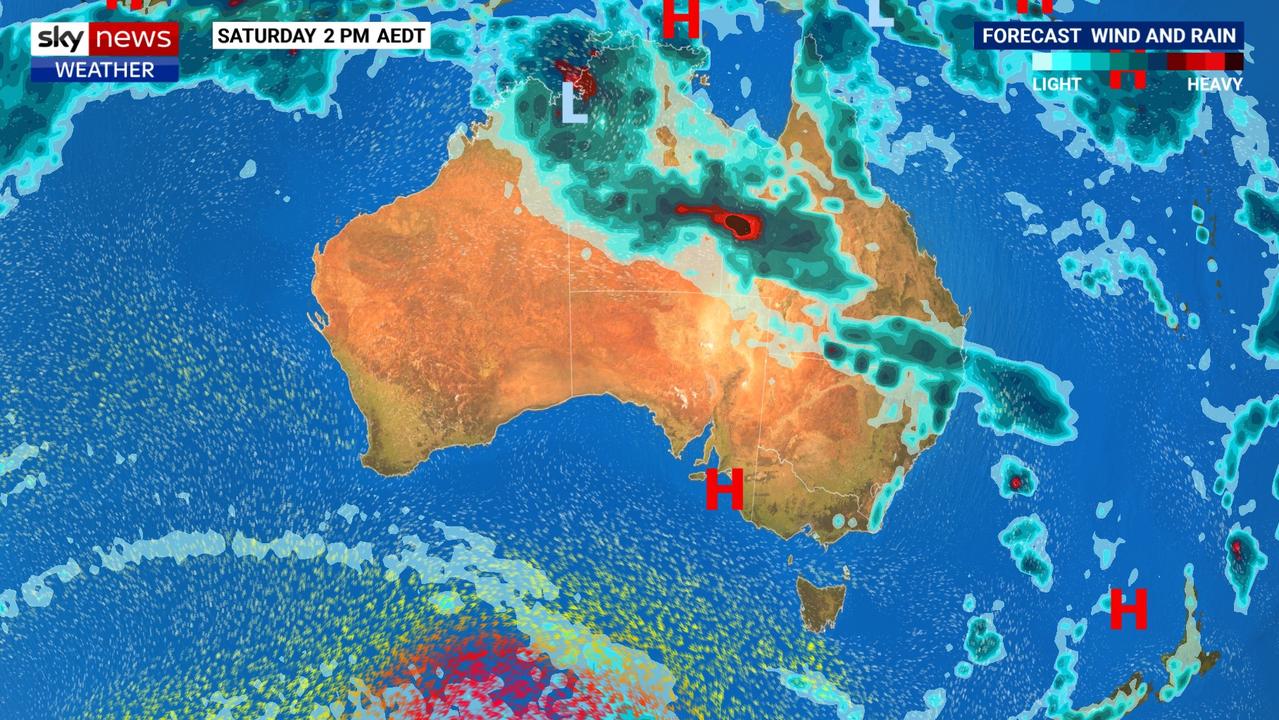 Moisture from cyclone Ellie is heading towards the east. Picture: Sky News Weather.

The remnant of Tropical Cyclone Ellie continues to have an effect through northern and Central Australia.

“While it’s normal for systems like this to occur at this time of year, it may cut off communities and also cause overland flooding with falls up to 300mm expected along the coast of the western Top End including south of Darwin.

“It’s going to be a sodden Christmas in this part of the country”. 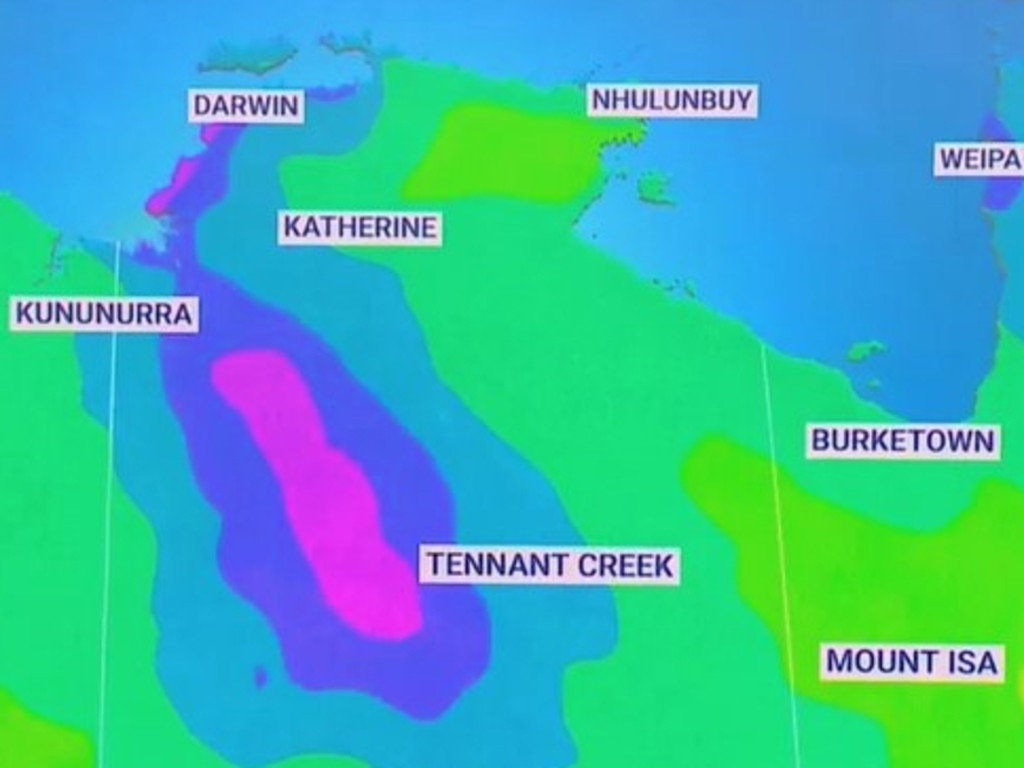 Parts of the NT could see 200mm of rain on Christmas Day. Picture: Sky News Weather

That low pressure system is bring moisture to the east,

“On Christmas Eve the storm rate is likely to contract to the northern half of NSW courtesy of a stalled low pressure trough.”

But there could be instability all the way from Sydney to south east Queensland.

“The environment is there for Christmas storms,” said Ms Osborne.

After the drama of Ellie, Darwin is looking dry and warm for the next few days with high of 26C on Christmas Eve, 32C on Christmas Day and a whopping 37C on Boxing Day.

On Tuesday it could hit 40C in the Top End before the temperatures start falling.

It will be wet in Alice Springs under that trough though. As much as 35mm of rain could fall on Saturday and then 25mm on a stormy Christmas Day. Temperatures will range from 19C overnight to 28C in the middle of the day.

Highs next week in Alice could top 30C.

Tennant Creek is forecast to receive 200mm of rain on Christmas Day as moisture from Ellie makes itself known.

It’s possible a storm will hit Townsville on Christmas Eve with a 30C high. Then 15-70mm of rain is expected on a very damp Christmas Day. It should mostly clear by Boxing Day however. The mercury will peak around the 30C mark with 23C lows. 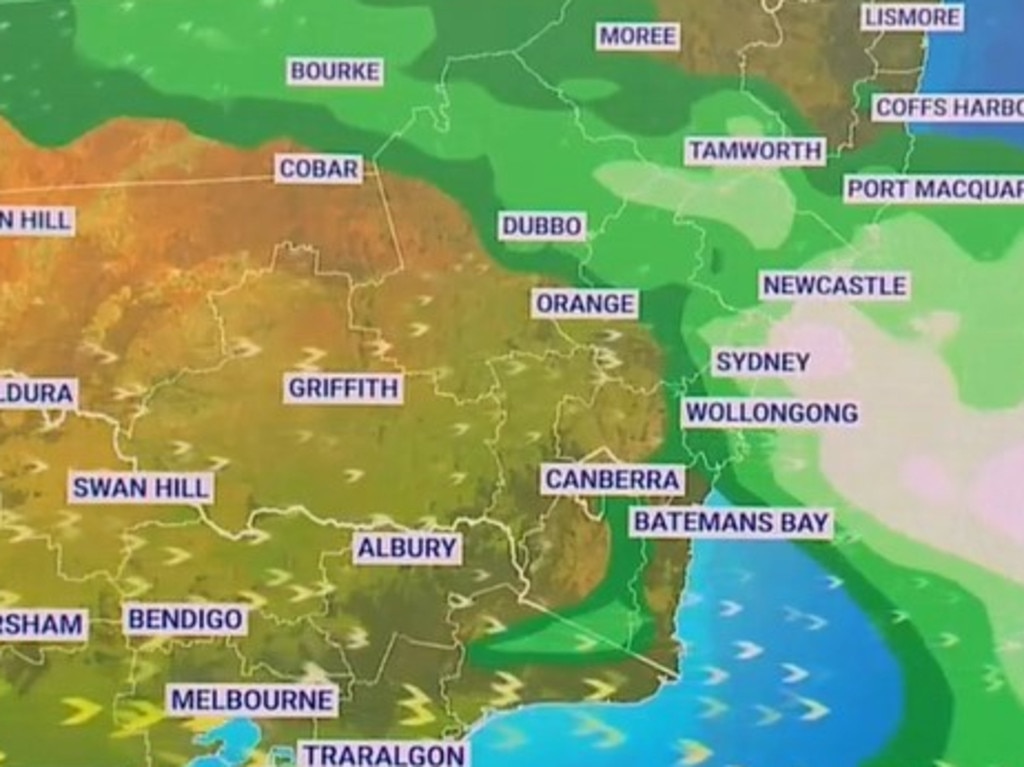 In Brisbane, the rain could make an appearance on Christmas Eve with up to 5mm on the big day too, followed by showers here and there into next week.

Christmas Eve will hit a high of 28C and low of 21C and that will stay fairly constant across the holiday.

Northern NSW may get some showers all through the Christmas weekend but they shouldn’t be too heavy.

They could coincide with storms so a quick intense dump isn’t out of the question.

Western Sydney could experience a storm on Christmas Eve with a few spots of rain.

But aside from that mostly dry and warm in the Harbour City for the next few days. Highs of 33C in Penrith across the weekend and 28C closer to the city. Lows in Sydney will be around 19C

It will be settled in Canberra with a warm Christmas holiday nudging 30C – it could get to 31C on Boxing Day. Minimums will get down to 14C. 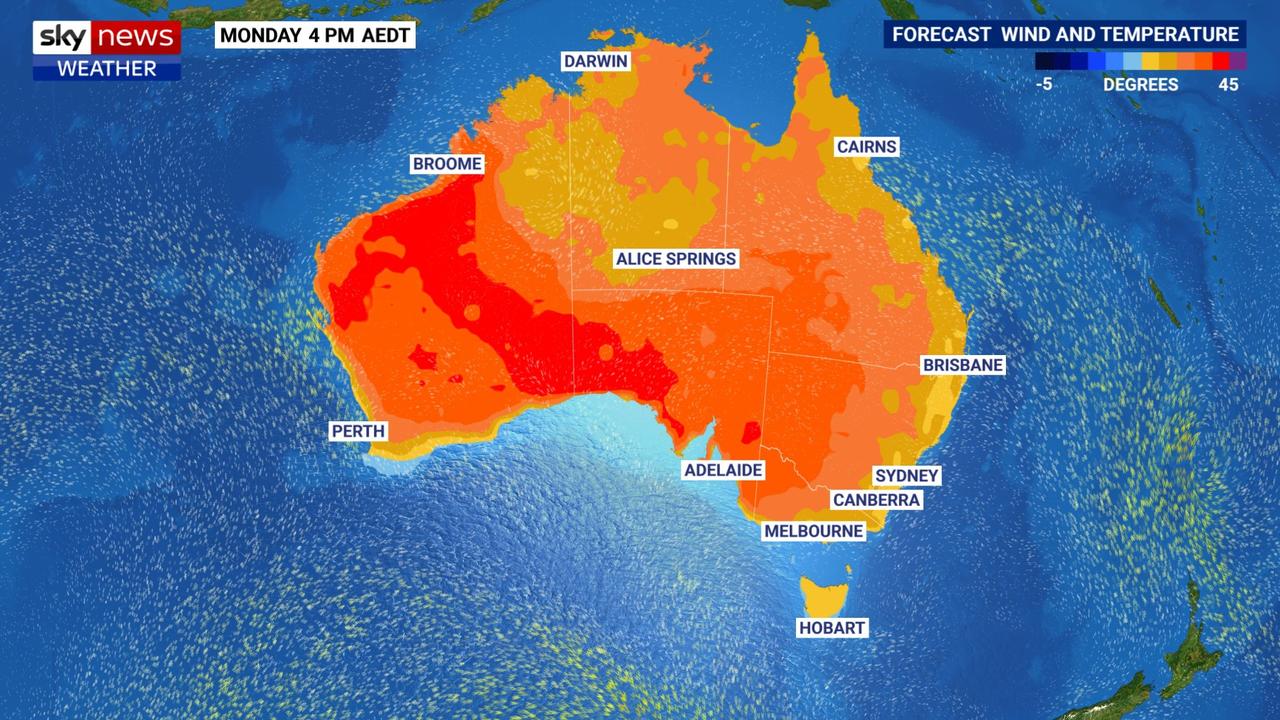 A mild 23C high is expected in Melbourne for Christmas Eve but that will rise to 30C on a sunny Christmas Day and then soar to 36C on Tuesday as the high pressure system takes control.

The MCG will be hit with a high of 29C on Boxing Day for the test. Overnight lows will be in the mid-teens.

In Perth, Christmas Eve will experience temperatures peaking at 31C and then 30C for day itself. A drop to 27C is forecast for Monday. It should be blue skies and sunny for the WA capital this festive period.

Adelaide is set to be a scorcher – although you wouldn’t know it with a 26C high on Christmas Eve.

But as the system powers through, the South Australian capital will get to 32C on Christmas Day and then 37C on Boxing Day and 40C on Tuesday.

A minimum of 15C is expected on Christmas Day, but on Tuesday at dawn it will be no lower than 25C.

There is no rain predicted in Hobart for Christmas. Saturday will reach 22C and then 26C for Christmas Day and 23C on Boxing Day. It could breach 30C midweek however.

There will be mostly sunny days and clear skies in Tasmania with minimums of 12-14C.