Millions of Aussie have been warned to brace for even hotter temperatures, as a brutal heatwave continues to smash much of the country.

We are just a week into summer and already northern parts of the country have been copping soaring temperatures, with some areas seeing their hottest day in years.

And, unfortunately for residents in these parts of the country, things are going to get worse before they get better, according to Sky News Meteorologist Rob Sharpe.

“Across the last few weeks we have seen extra sunshine build up across the country and that has been quite noticeable around the Pilbara in northern parts of Western Australia, the heat engine of the country,” he said.

“That heat has slowly made its way all the way across the country all the way to Brisbane, where we saw temperatures reach 35C for the first time in 14 months yesterday.” 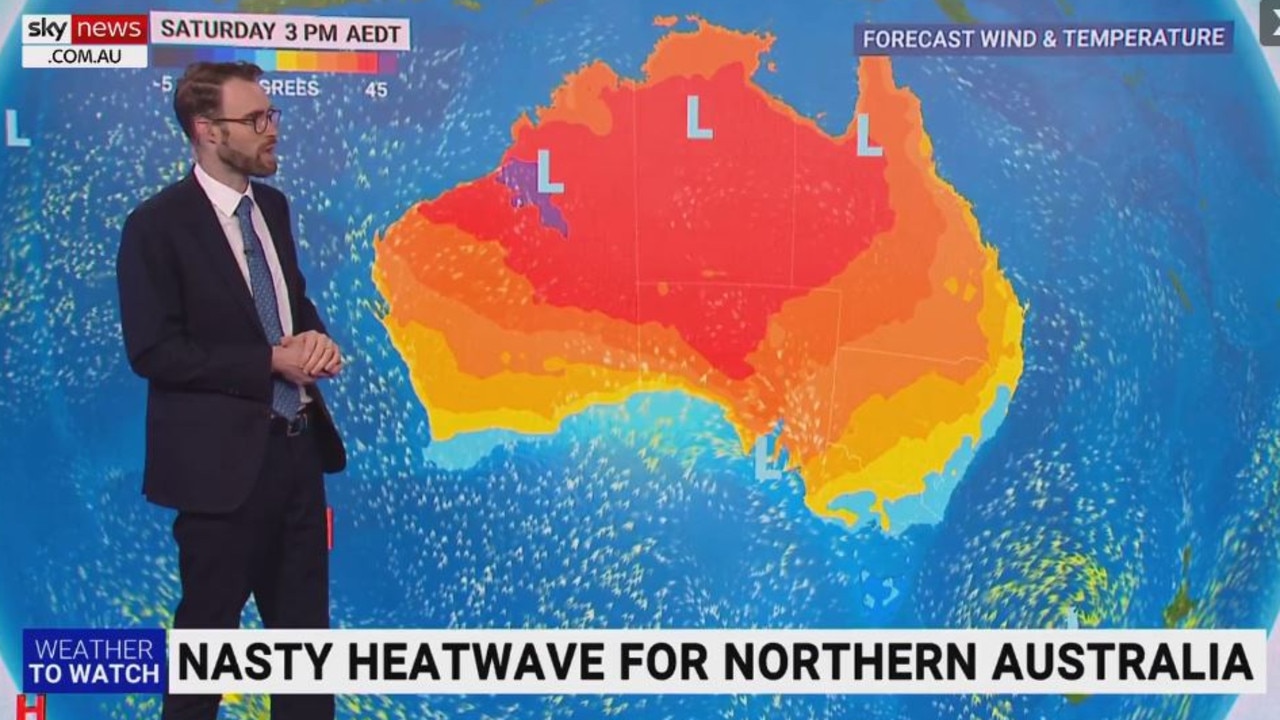 Unfortunately the worst of the heatwave is still yet to come for parts of the country. Picture: Sky News Weather

Mr Sharpe said the heat is spreading right across the middle of the country, with some areas even seeing temperatures above 45C.

He warned that Thursday will likely be the hottest day of the heatwave for southeastern Queensland, though a cool change will finally bring some relief in the evening.

For central and northern parts of the country, temperatures will keep on rising.

“The heat is lingering on over the interior of the country and up into the north, with the worst of the heatwave expected Friday into Sunday across northern parts of Australia,” Mr Sharpe said.

“You can see those temperatures really soaring in many locations, even Darwin is likely to have a severe heatwave as we move to the end of this week and possibly lingering on into Monday for the far north as well.

“But notice on Monday the heat reduces for parts of central and northern Australia because we are finally going to see a little bit of extra cloud, shower and storm activity in those regions.”

The Bureau of Meteorology (BOM) currently has heatwave warnings in place for parts of Queensland, Western Australia and the Northern Territory.

Daytime temperatures in the low to mid forties are expected for inland Northern Territory and northern and interior parts of Western Australia.

Areas closer to the coast in the Northern Territory will experience temperatures in the mid to high thirties. 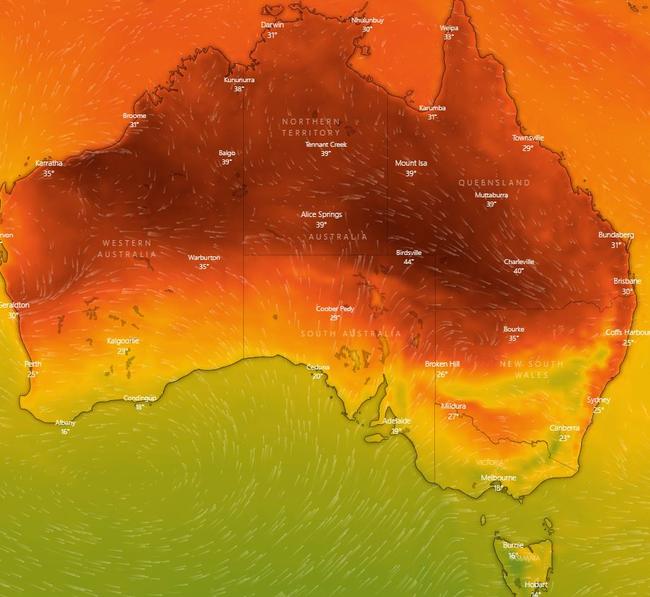 Temperatures will remain high for northern and central parts of the country, while southeastern areas experience a cold snap. Picture: Windy

“Severe to Extreme heatwave conditions are expected to increase in area and intensity over the coming week,” the BOM warned.

But while huge swathes of the country battle to stay cool, some southeastern areas could be shivering through the coldest start to summer in more than a decade.

By tomorrow, residents in Victoria, Tasmania and southern NSW will notice a significant drop in temperatures, Mr Sharp said.

“Melbourne is looking at its coldest summer day in 16 years if it only tops out at 15C,” he said.

“That southerly change will run up the NSW coast, dropping temperatures for Sydney tomorrow.”

A new cold front will bring wet weather tonight and into tomorrow morning for southeastern parts of the country.

Mr Sharp said it will be the “most significant rain we have seen for sometime in eastern Australia” but, even so, there is “not heaps in it”. 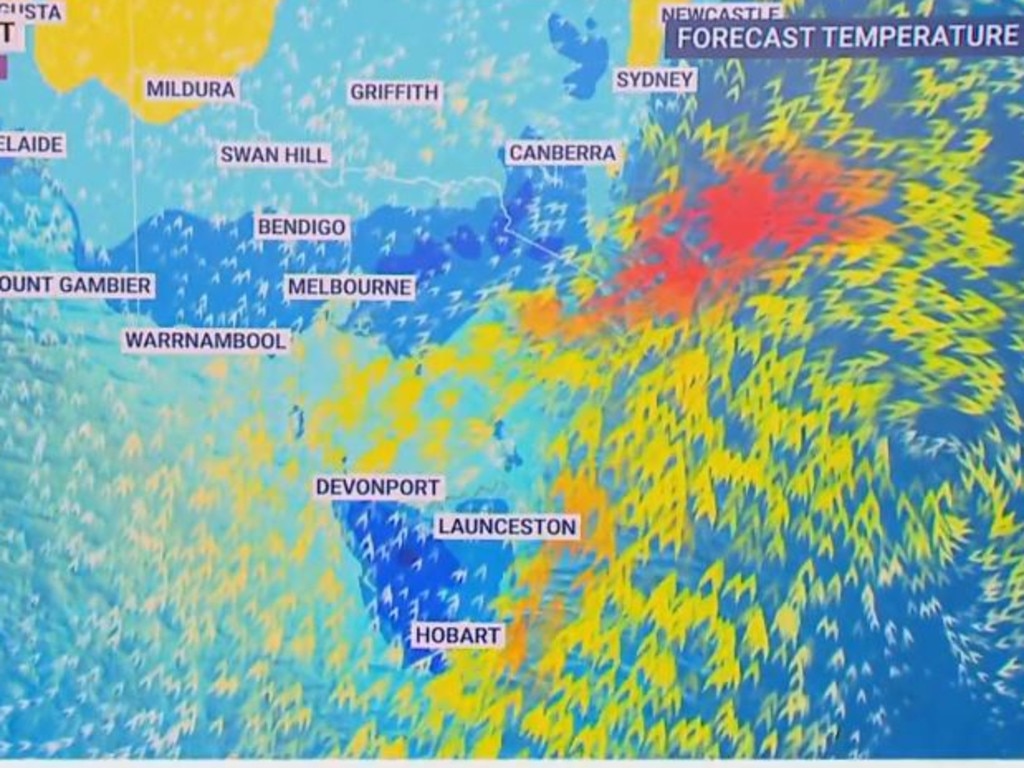 Southeastern parts of the country can expect to see a drop in temperatures tomorrow. Picture: Sky News Weather

What to expect across the capitals

Sydney can expect a top of 22C on Thursday, with temperatures hovering around the low 20s before jumping up to a top of 28C on Sunday.

Canberra can expect similar temperatures, with top temperatures in the low 20s before shooting up to 28C on Sunday.

Temperatures are expected to drop significantly for Melbourne, with a top of just 15C expected tomorrow, along with a chance of showers in the morning and afternoon.

Things will start to heat back up heading into the weekend, with tops of 24C and 26C on Saturday and Sunday.

There is a high chance of showers for Hobart on Thursday, with tops of 14C and 16C tomorrow and Friday.

Adelaide can expect a top of 21C on Thursday, before temperatures rapidly rise heading into the weekend, with a top of 34C forecast for Saturday.

Temperatures will be significantly hotter in northern parts of the country, with Brisbane forecast for a top of 37C on Thursday, along with possible thunderstorms in the morning and afternoon.

The temperature will drop down to a top of 28C on Friday and even further to 26C on Saturday.

When heatwave will hit your stateDesert blast: Heatwave to hit half the country

Darwin can expect a mostly sunny day tomorrow, with a top of 35C, rising to 36C on Friday and Saturday.

Perth can expect a top of 27C on Thursday, before that number drops down to 23C on Friday.