Wet weather has returned to the east coast after a rare spread of summery days, with heavy rainfall and thunderstorms settling in for the weekend.

Sky News meteorologist Alison Osborne said the wet weather would likely stick around over the weekend and into next week for parts of Queensland, NSW and Victoria.

“A weather pattern will stall across eastern Australia and intensify into this weekend, leading to an increase in shower and storm activity,” Ms Osborne said.

Sydneysiders woke to more rainy weather on Friday morning, with coastal areas “not feeling too summery” for the rest of the week.

“Over NSW, a southerly change will continue to barrel up into northeastern parts of the state today and tomorrow morning,” Ms Osborne said.

Thunderstorms across the coast and inland will bring heavy rainfall on Saturday and Sunday. 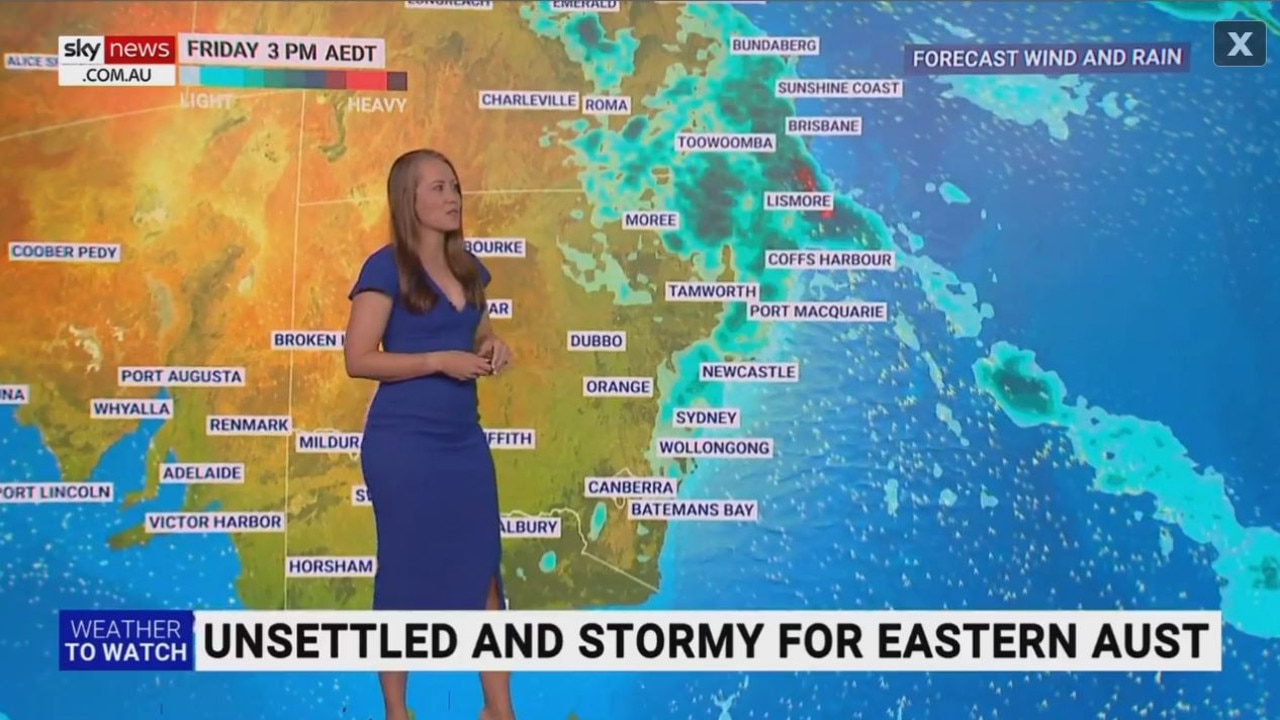 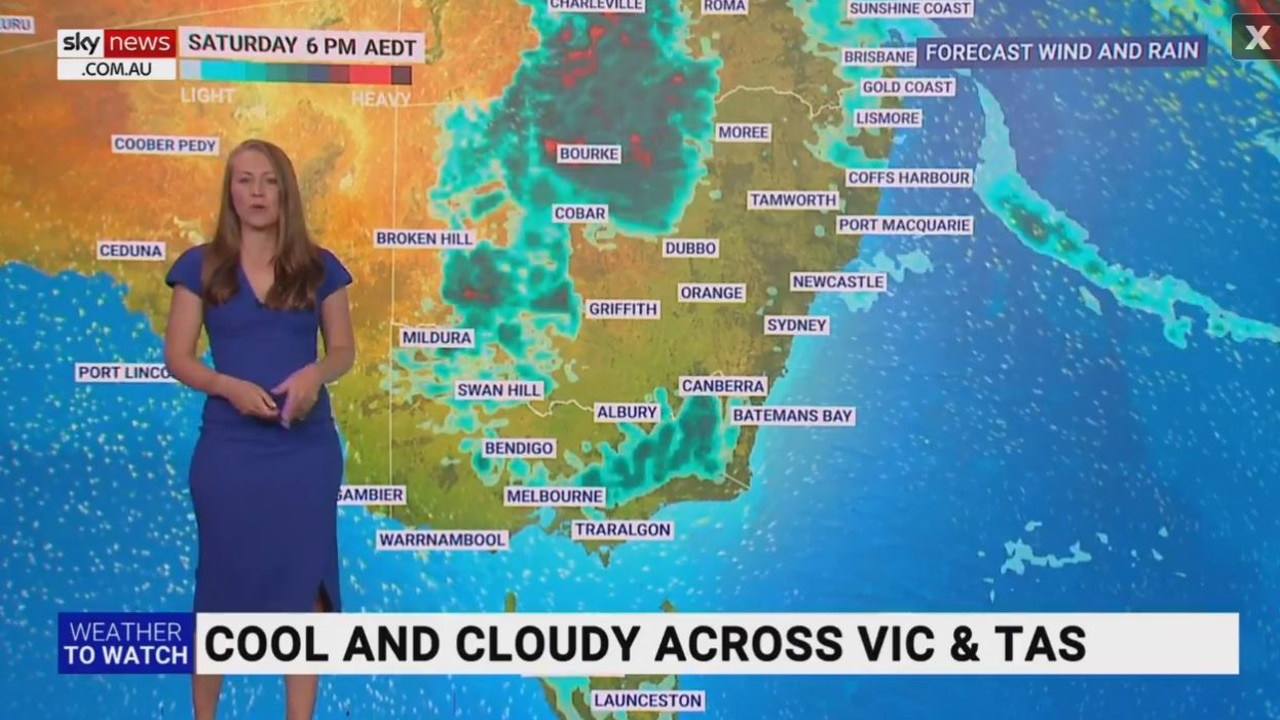 Another weather system will move east on Saturday and into Sunday. Picture: Sky News

Hotter weather building in inland parts of the state is pushing temperatures down on the NSW coastline.

“As heat builds across the outback, coastal areas will not be feeling too summery,” Ms Osborne said.

While temperatures are forecast to stay relatively mild, the rain is not going anywhere fast.

Showers are expected to stick around for most of the coastline well into next week, with the chance of sun poking out on Wednesday.

Canberra is enjoying a reprieve from the wet weather on Friday, but locals should soak it up while they can because rain is forecast for next week.

Showers will arrive on Sunday and are expected to settle over the nation’s capital until Wednesday when cloudy but warm conditions are forecast. 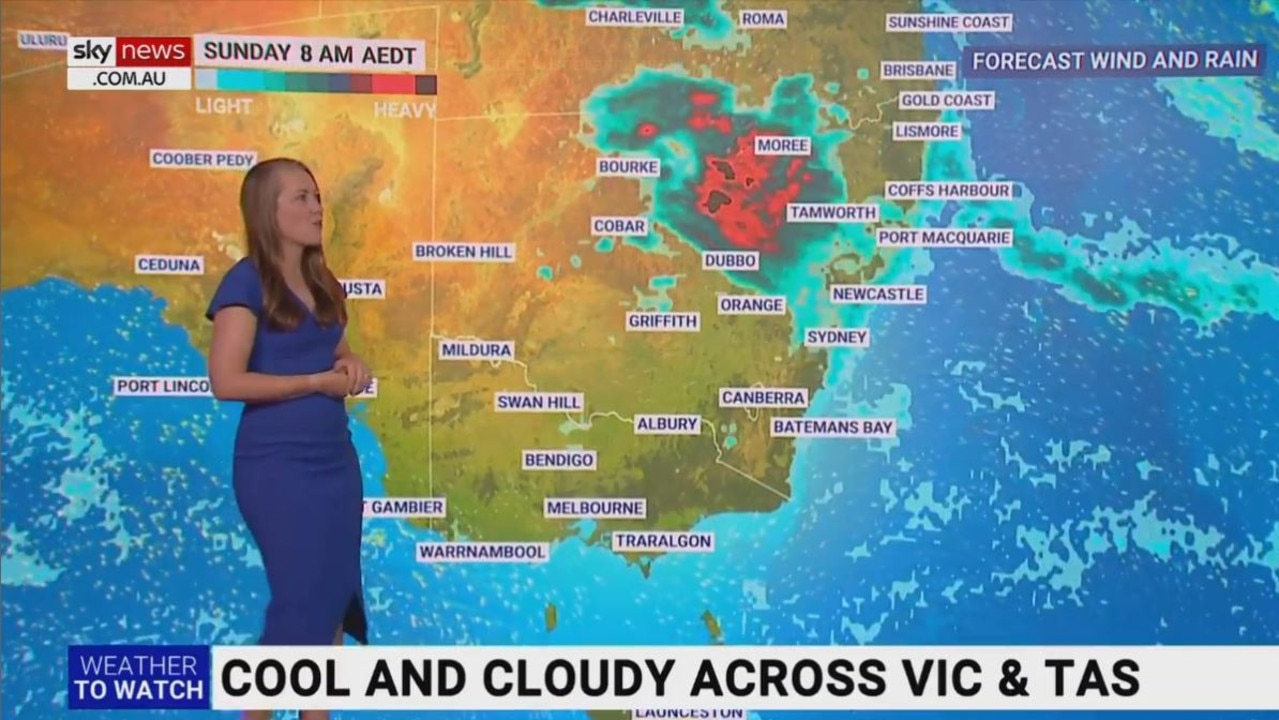 Melbourne is also enjoying a string of warmer blue sky weather and these conditions are likely to last over the weekend.

Temperatures will stay above 25C before climbing to 27C on Monday.

However, by Tuesday a cold front will roll into Victoria accompanied by showers and thunderstorms.

It’s looking like the wet weather won’t stick around for long, with a return to sunny but cloudy conditions by Wednesday.

South Australia will largely escape the pattern of stormy weather headed for the east coast.

Mostly sunny warm conditions are expected for the weekend, with temperatures above 26C.

The mercury will crack 30C on Sunday.

Residents of the southernmost state should soak up the sunny weather while they can, as wet weather is on the way.

Rain will arrive on Saturday and will continue well into next week. 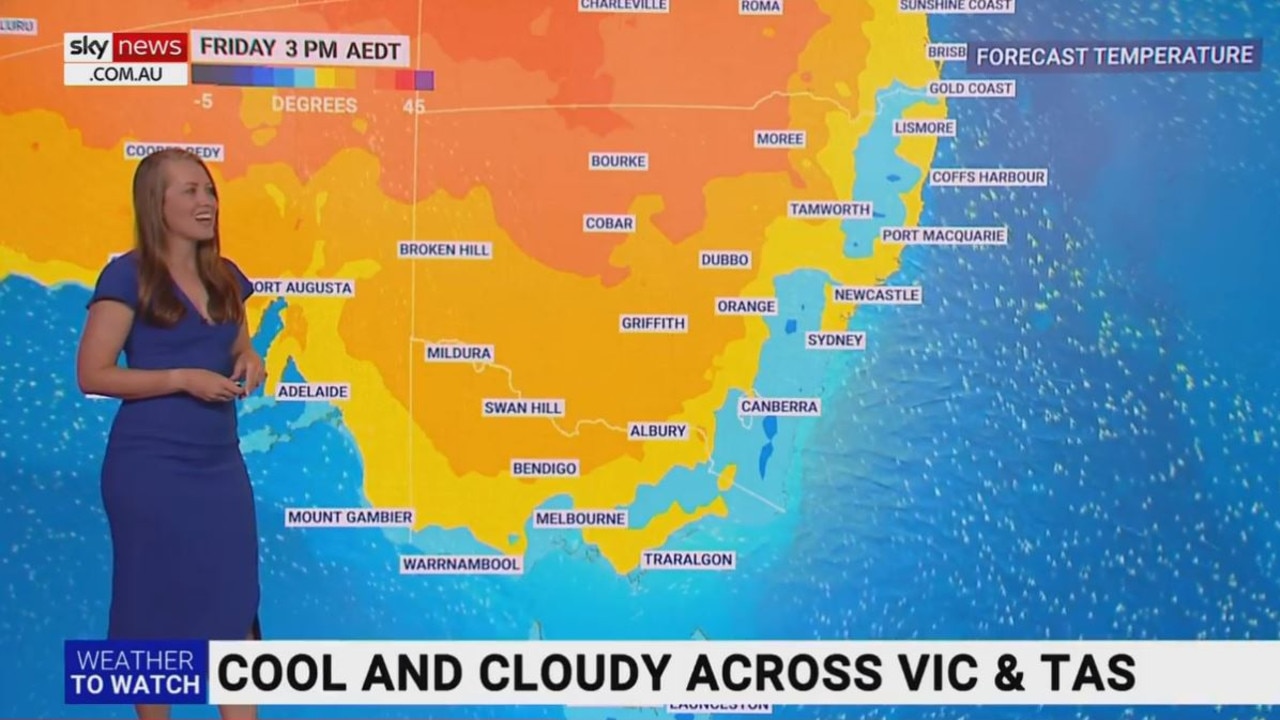 Cool and cloudy weather is forecast across Victoria and Tasmania. Picture: Sky News

Temperatures will stay mild and below 25C.

The rain is expected to end by Thursday next week, with the sun forecast to return.

A front has moved into southeastern Queensland on Friday morning and has brought “humid and unsettled weather” to the region.

Up to 10mm of rain may fall in Brisbane on Friday, though the heaviest rain is not expected to arrive until later in the day. 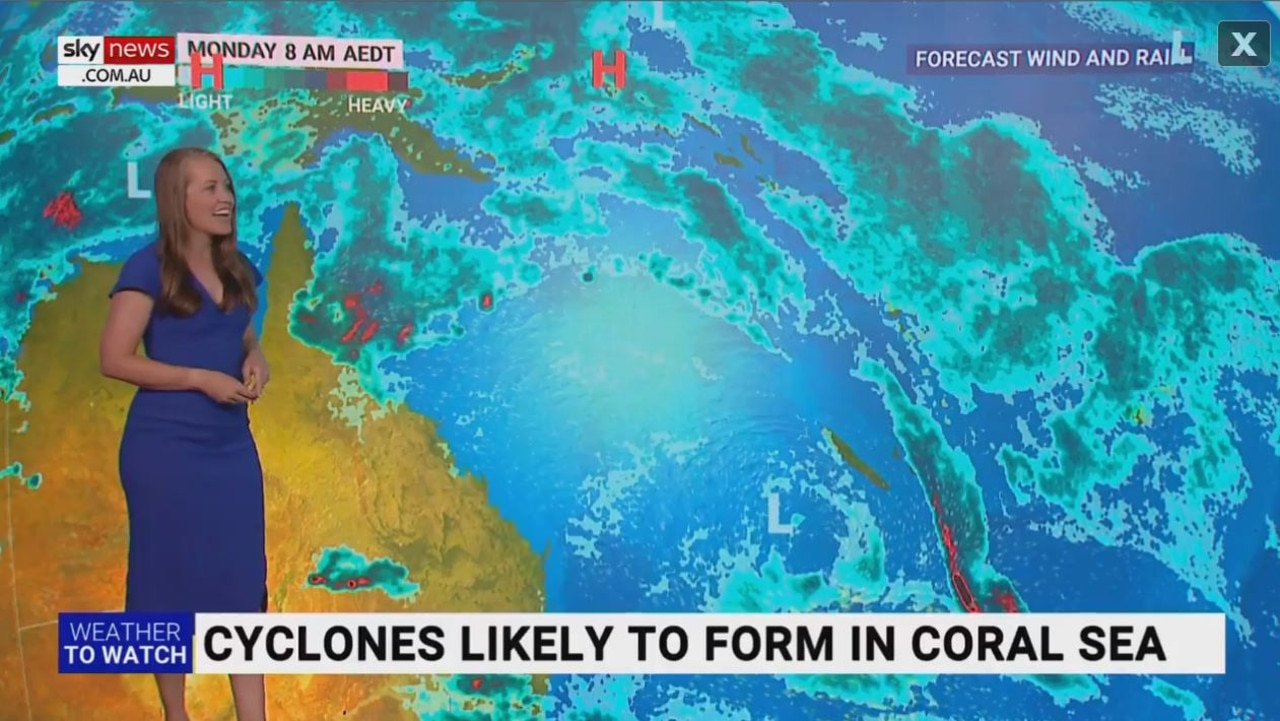 Sunshine is expected to return to Brisbane on Sunday, with temperatures climbing to 29C.

A thunderstorm may move into Perth in the afternoon, but otherwise sunny conditions are likely for most of the weekend.

Temperatures will climb to 36C in the state’s capital on Friday and stay warm.

Storms continue to lash the Northern Territory, as the wet season perseveres with no end in sight.

Up to 15mm of rain may fall on Friday and storms will stay over Darwin into next week.