Dramatic scenes have erupted at an Invasion Day rally with a fight breaking out and a protester claiming Australia Day is “dead and gone”.

Thousands of Australians are rallying in solidarity with First Nations people, marching under the scorching sun in a bid to get the government to change the date.

Protesters are taking to the streets with marches organised in every state and territory on Thursday as many are choosing not to mark the national holiday and are protesting January 26 as Australia’s national day of celebration.

Crowds gathered early in the morning on Gadigal land at Belmore Park in Sydney’s CBD ahead of the march at 9.30am.

It wasn’t long before a fight broke out in the crowd with a small group of people holding up an Australian flag and signs which read: “Always was always will be Australian land”.

During the rally they were asked by Gomeroi woman and Indigenous activist Gwenda Stanley to leave the area.

“Australia Day is dead and done. Get over it,” she shouted from across the park. 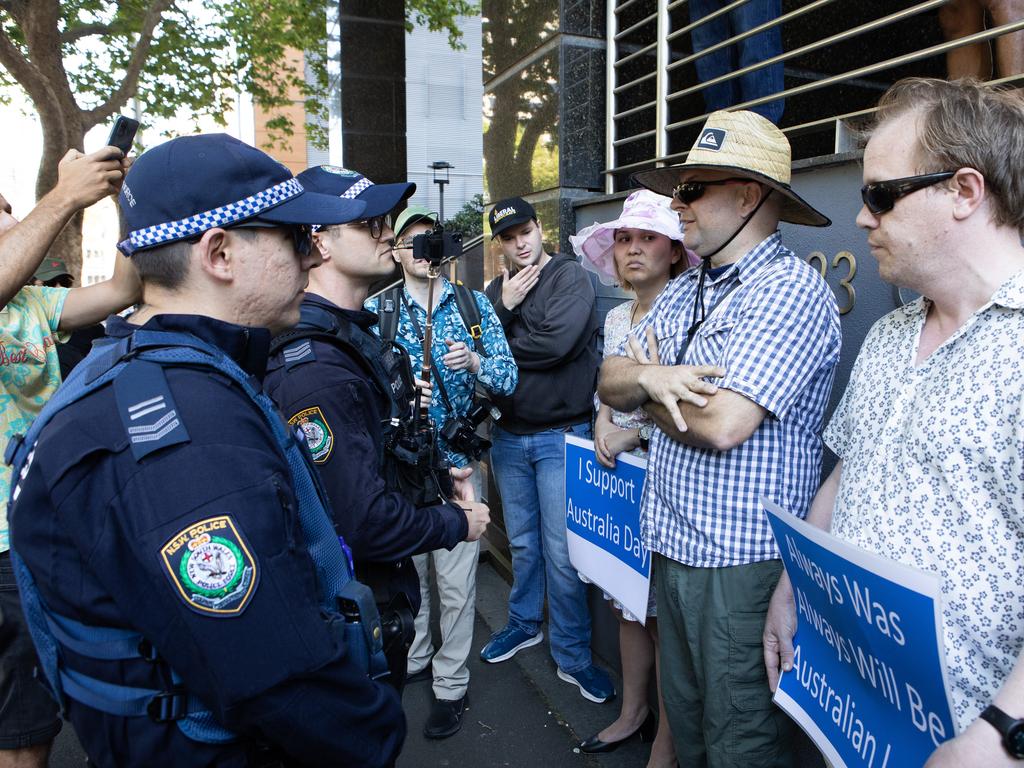 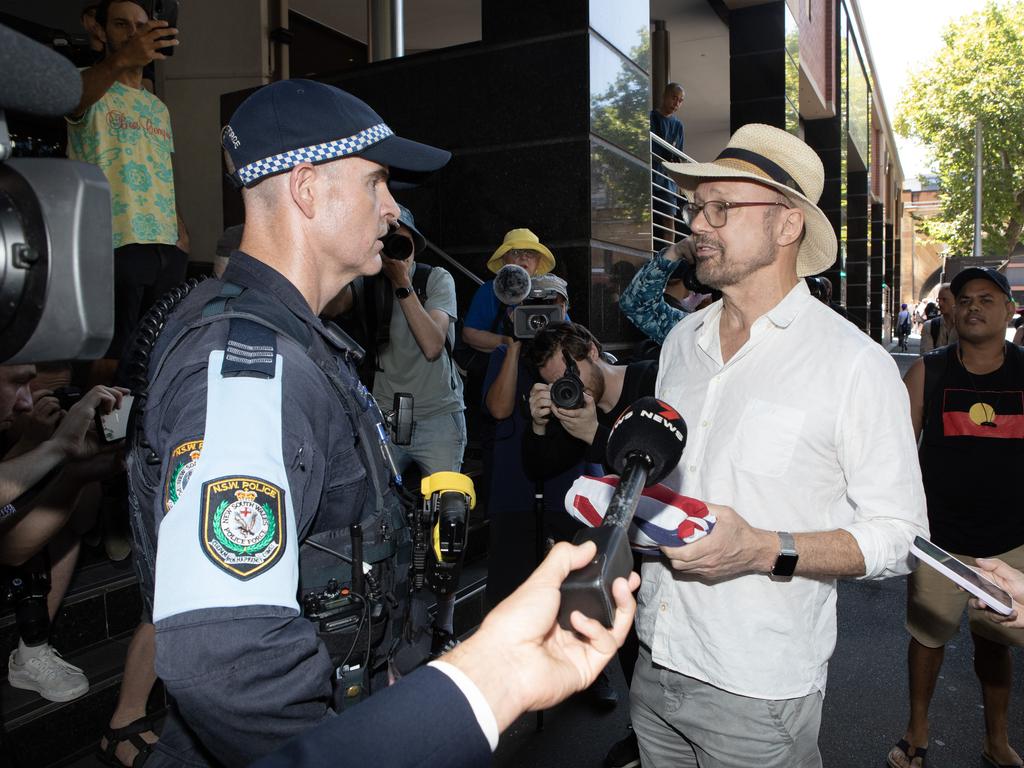 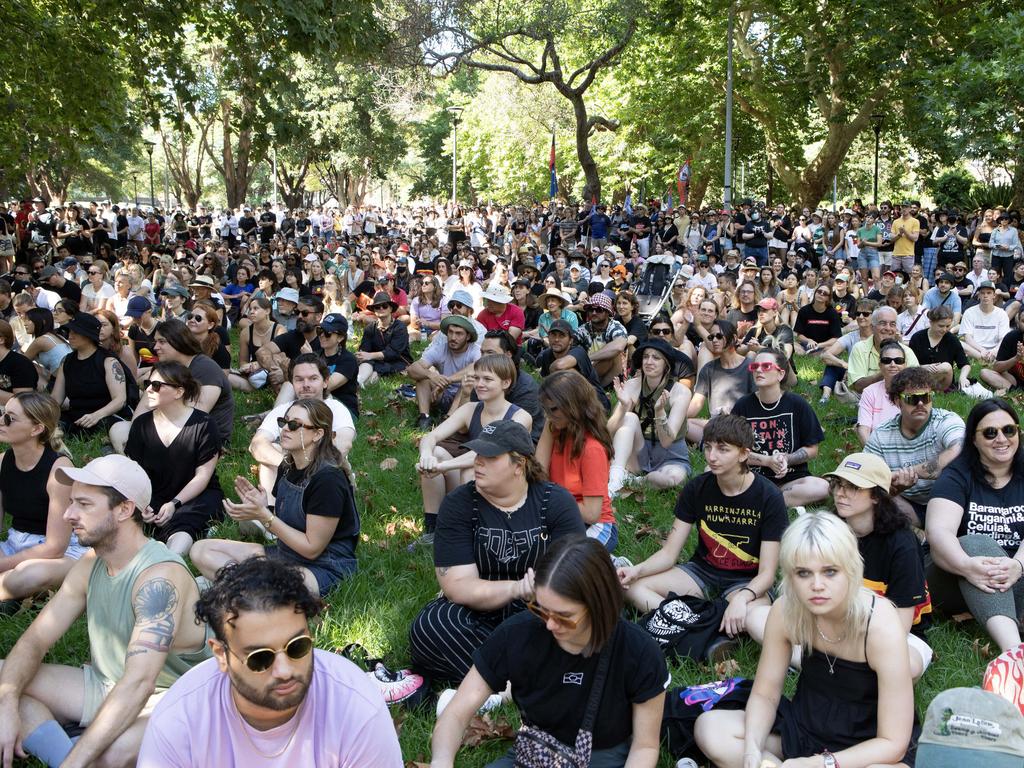 “Australia Day is dead and gone. Get over it. This is our day now. It’s gone. It’s done and dusted.”

Police also intervened and asked the group to disperse and said they would be issued with a direction, if they didn’t obey the request.

Protester Kim Jacobs, who was holding up an Australian flag, justified his dissent as democratic.

“I guess I’m one of those awkward people who have a point of view and felt shame to express it,” he told a police officer. 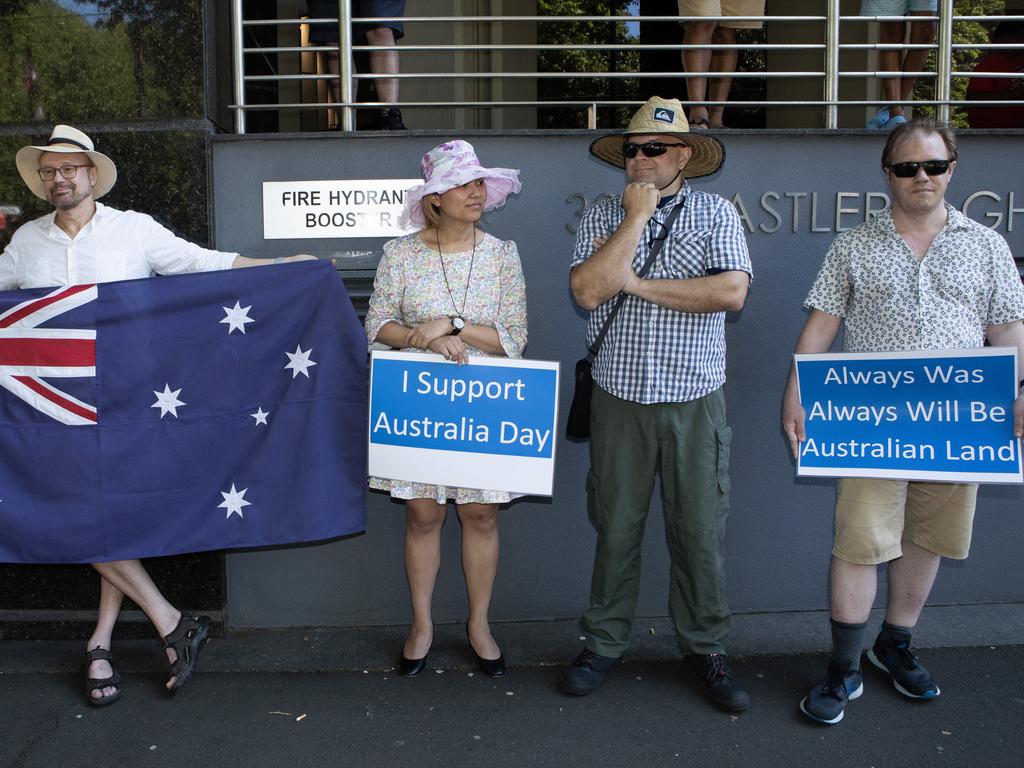 The right-wing nationalists were told to move on from the crowd. Picture: NCA NewsWire / Brendan Read, ,

As he left, a bystander was heard saying: “You’re everything that’s wrong with this country”.

The theme of Thursday’s rally is “sovereignty before voice” in response to the Federal Government’s Voice to Parliament proposal.

The rally opened with a smoking ceremony, followed by traditional dances and an acknowledgement of country made by Uncle Dave Bell.

A heavy police presence was also seen on park grounds.

Speakers made calls for Indigenous sovereignty and criticised the referendum for an Indigenous Voice to Parliament.

“Liberal, Labor, the system is not for Black People,” she said as the crowd cheered in response. Greens MP Mehreen Faruqi is at the rally and posted images of the smoking ceremony. Picture: Twitter

“When it comes to the time. Vote ‘no’ to the referendum.

Greens MP Mehreen Faruqi is present at the march and posted images of the smoking ceremony to Twitter.

“Today I am joining First Nations people to mark 26 January as Invasion Day, as I have for many years. It is a Day of Mourning,” Ms Faruqi wrote.

Signs read “we deserve better than just a voice” and “vote no to referendum”.

The sails of the Sydney Opera House were lit up with Indigenous artwork by proud Kamilaroi woman and artist, Rhonda Sampson, to celebrate First Nations women around the water of Sydney Harbour.

Prior to the protest, hundreds gathered at Barangaroo for the WugulOra morning ceremony to honour First Nations people and reflect on what the day means for them.

An ancient Smoking Ceremony was held to “cleanse the way for new beginnings” and to celebrate the world’s oldest living culture through dance, music and language.

A march also kicked off in Canberra at Garema Place, with hundreds of people gathering in the sun at 9.30am.

A sign hung in the park reads “Self-determination not incarceration”.

The “Sovereignty Day” rally also has the same theme of rejecting the government’s Voice to Parliament.

Hundreds gathered in the city before marching to the Aboriginal tent embassy. 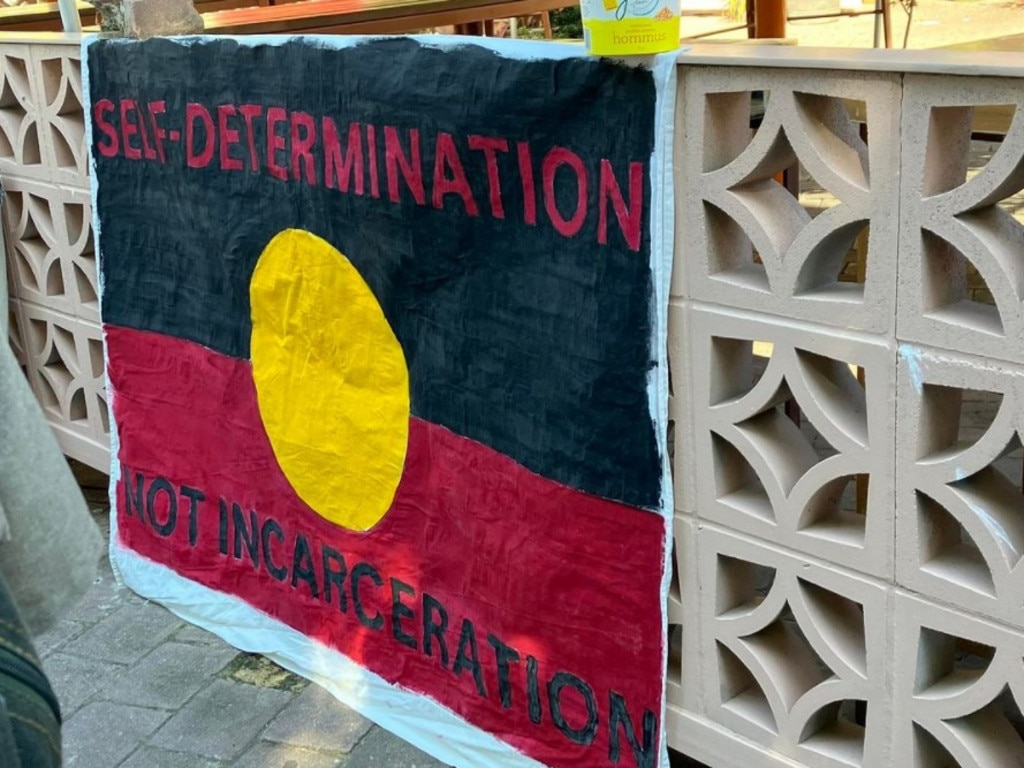 A march kicked off at Fogarty Park in Cairns at 9.00am, with protesters walking through the city with a sign which read “Abolish Australia day”.

The crowd could be heard chanting: “What do we want? Treaty. When do we want it? Now”.

“No pride in celebrating genocide”, another sign in the crowd read.

Protests are planned across every state and territory, with Brisbane set to begin at 10am from Queens Gardens, Hobart from 10.45am, Darwin from 10.30am, Adelaide from midday, Perth from 12pm and Melbourne at 11am from Victoria Parliament House.

Non-Indigenous Australians have been celebrating what is known as “Australia Day” for 29 years.

The day is a historic one which holds deep, cultural significance to Indigenous Australians and is a chance to advocate for Aboriginal and Torres Strait Islander deaths in custody.