A bogan Aussie mistake is back with a vengeance and taking over Byron Bay as thousands of Schoolies swarm the beachside paradise like locusts with mullets.

Once a punchline, the mullet hairstyle is now the style du jour. But not just any mullets. DIY mullets. The kind that look like they were cut with nail scissors while glancing in the rearview mirror.

After a growing resurgence, the mullet is again thriving with the stubborn relentlessness of an out-of-control weed. 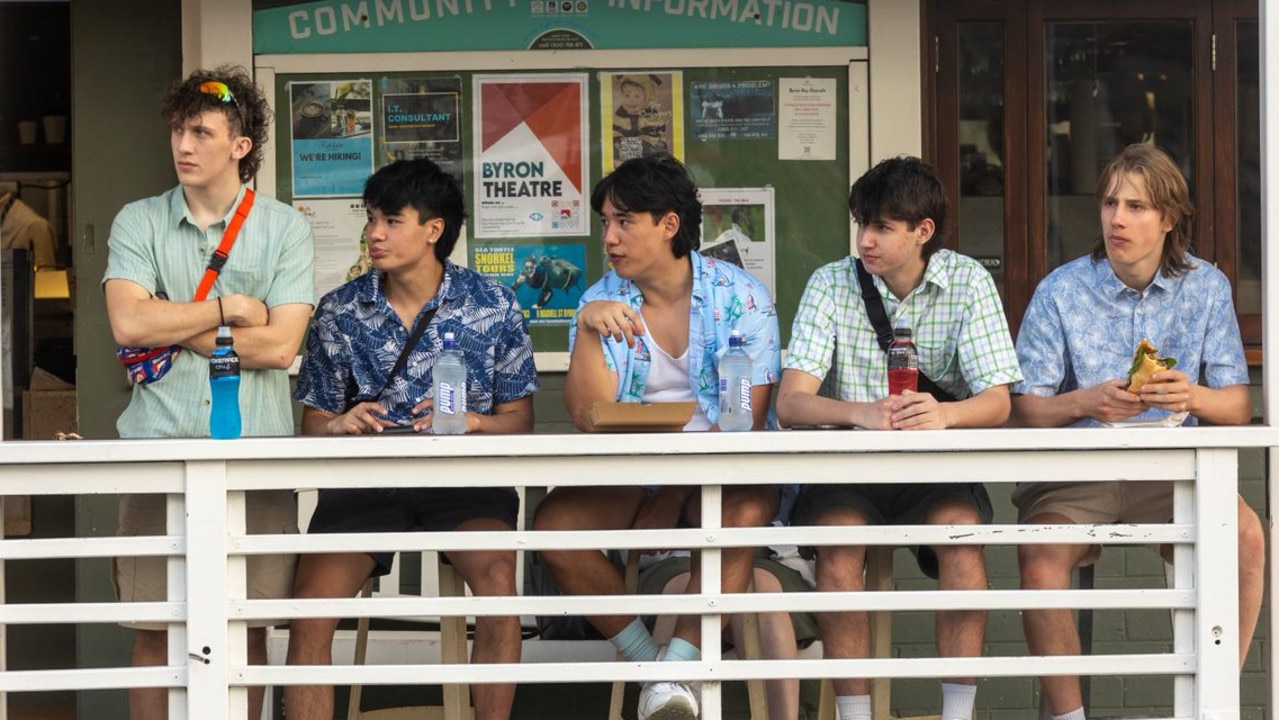 Thousands of school leavers from New South Wales and Victoria kicked off their first week of partying in Byron on Saturday night and the streets were flooded with a sea of mullets.

Locals were constantly being whipped and lashed in the face. A small child got tangled in a particularly wild curl and had to be cut loose.

An unflinching investigation by news.com.au got to the bottom of the business-in-the-front, party-in-the-back lifestyle. 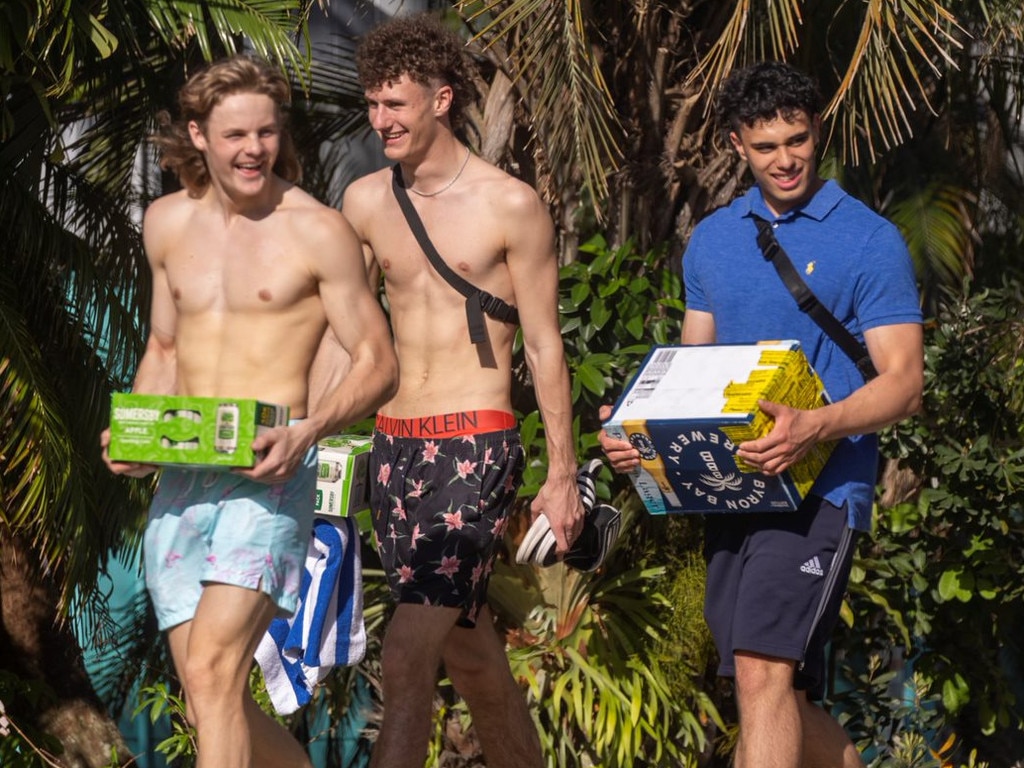 Feel the breeze in your hair. Picture: News.com.au

For Will Richards from Melbourne, the hairstyle met three important pillars.

“The girls like it, it infuriated the teachers and also it was just something to do — it was a conversation starter,” he said.

He was standing outside Zaza Kebabs on the main drag of town and eating hot chips with a bunch of mates who also had mullets.

They all attended the same Catholic private school — the kind of educational institution that would usually ban unconventional hairstyles. 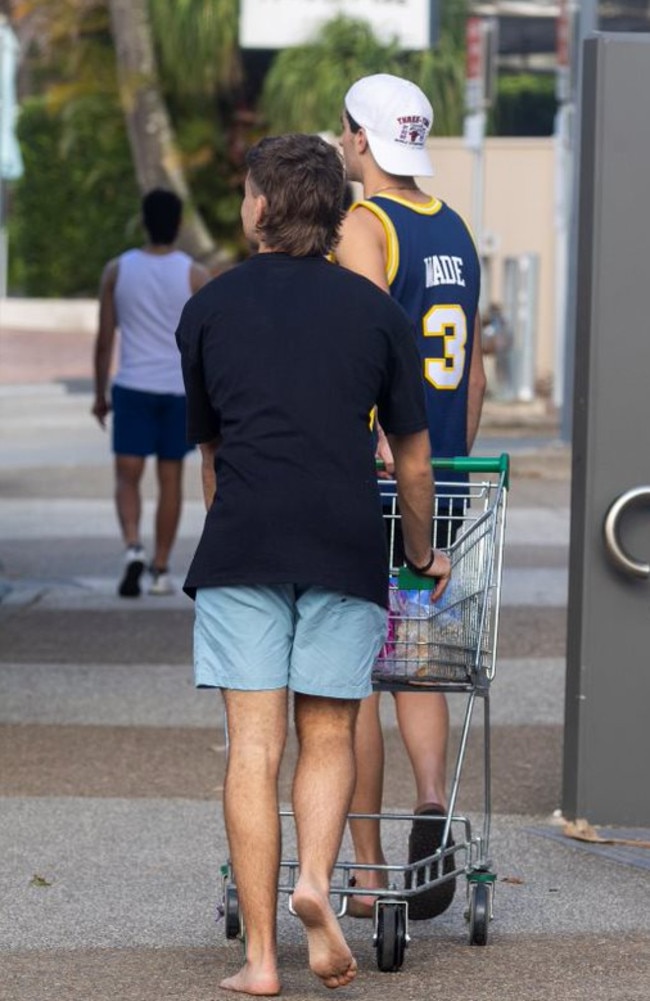 Nothing says freedom like bare feet and a mullet. Picture: News.com.au

The boys banded together and toppled the faculty.

“The teachers got angry but then 50 kids in our year level got this trim,” Will said.

The fire got too big for staff to extinguish.

“They weren’t stoked,” he shrugged. “We were school leaders and apparently it didn’t look good in photos.”

Photos taken on the streets of Byron confirm the staff’s concerns.

Aiden and Oscar, two more Melbourne graduates with mullets, said their cohort also took on the teachers and were met with an ultimatum. The rule? 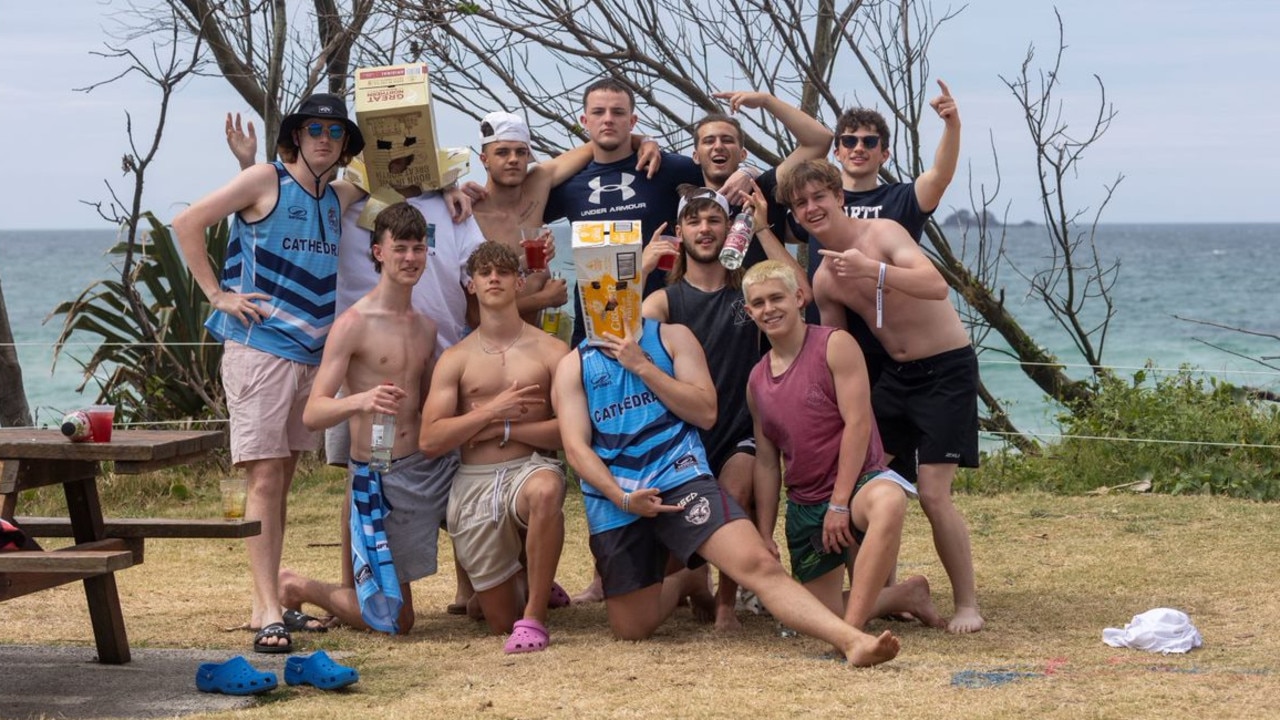 Side note for schoolchildren: a cardboard beer carton with eye-holes cut in it counts as a hat. Picture: News.com.au

Later in the evening, as Beach Hotel closed up after a string of DJ sets and schoolies hit the streets looking for the next party, four mullet bros reflected on their hair journey while lining up at the late-night bakery on Jonson Street. 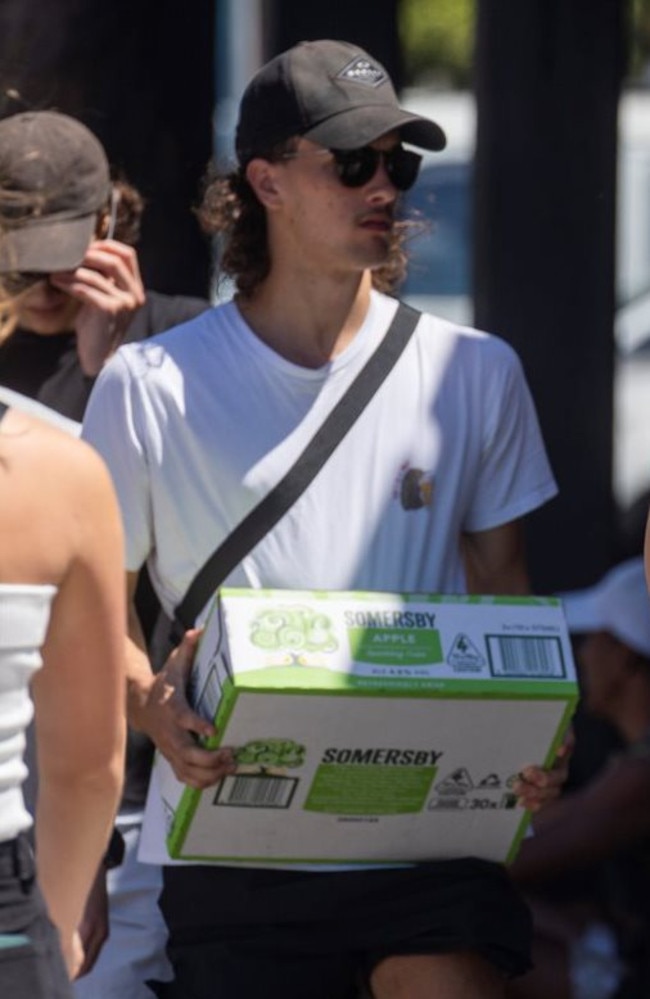 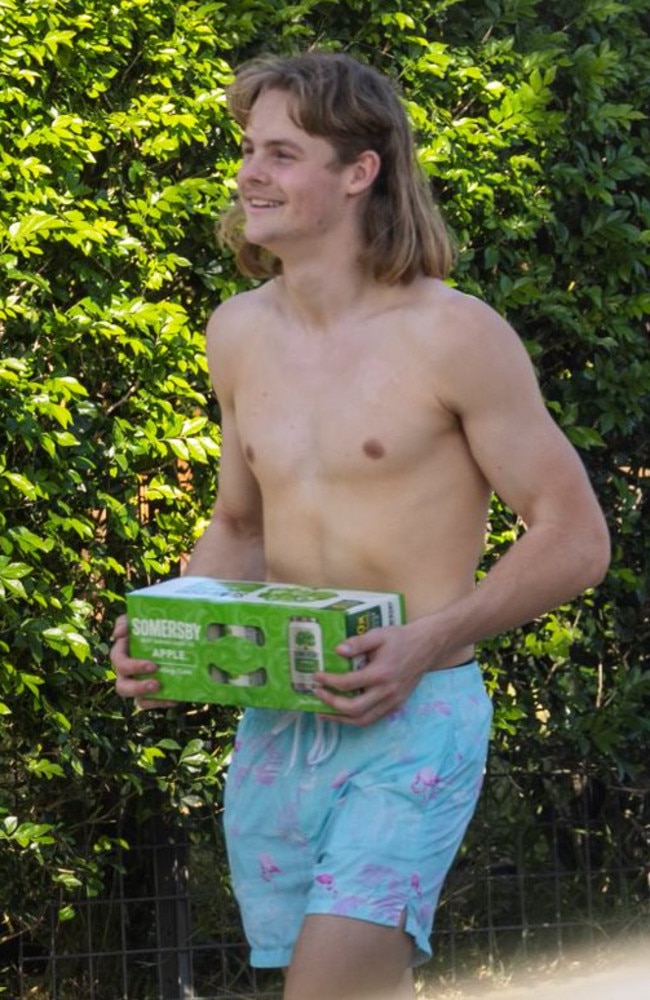 “Your first mullet is always cut in the bathroom at ya mate’s house,” Charles Kilburn said as all his mates nodded, their mullets blowing in the midnight breeze.

“The real truth behind a mullet is you wanna have long hair but you don’t wanna have the struggle of long hair so you keep the front short and if you trim the fringe it doesn’t get in your eyes and you don’t have to wear a headband.” 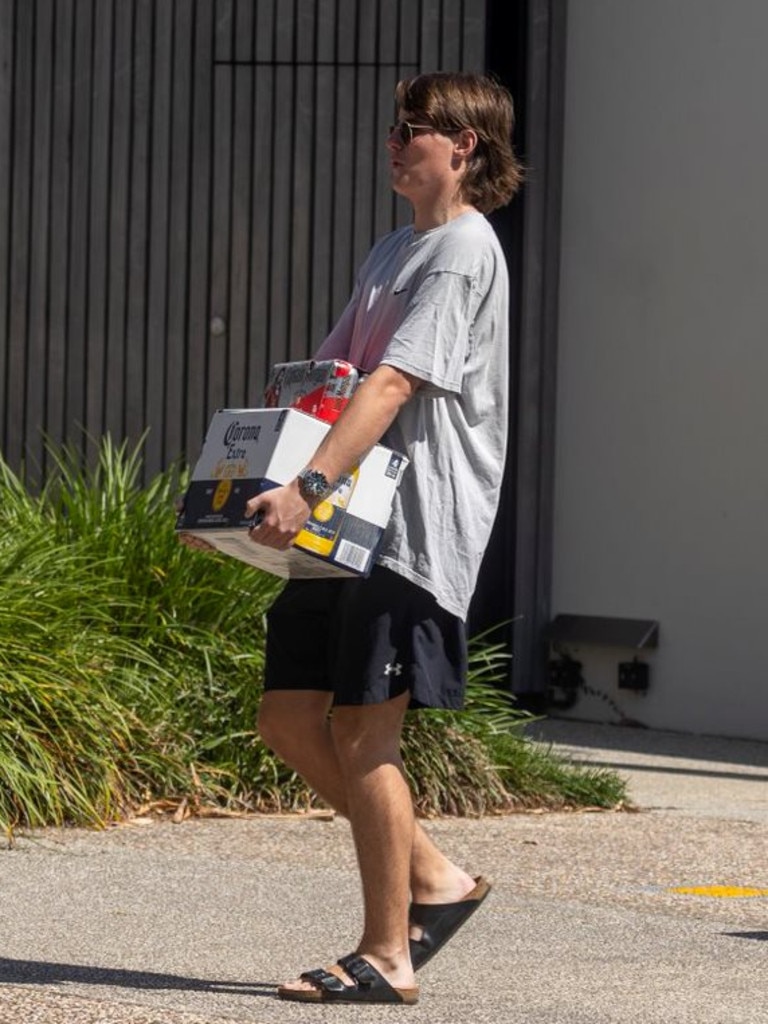 On his way to the salon. Picture: News.com.au 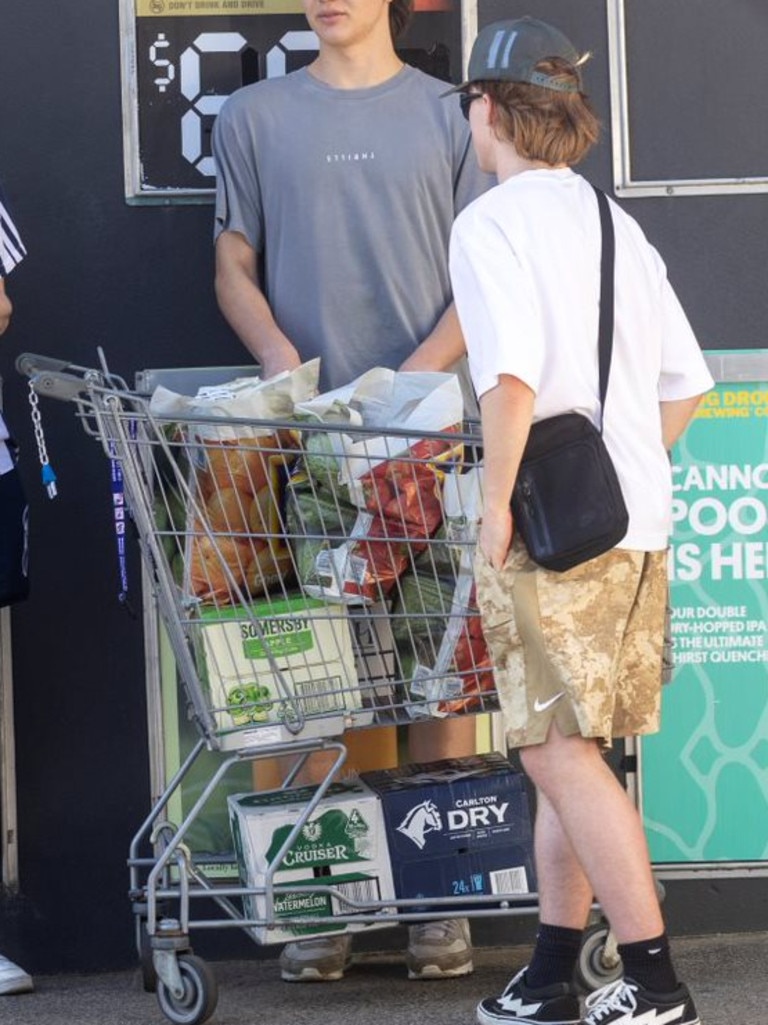 Not a Thomas Shelby in sight. Picture: News.com.au

One of the boys piped up.

“I could be the sh*ttest bloke and have a good mullet still!” he argued.

Another provided more nuance to the mullet debate.

“You’ve either got the Thomas Shelby or the mullet — there’s no in between,” he said, referring to the texturized crop with shaved back-and-sides sported by a character in the TV series Peaky Blinders.

Sophie Bradshaw said she wasn’t opposed to the mullet but proposed some guidelines.

“A mullet is fine but I think if it’s too long, it doesn’t look neat,” she said.

It seems the girls are on the same page as their former teachers: past the collar, see ya later.