Police have released information about the surprising number of arrests made on the first night of schoolies, as thousands of school leavers descend on the Gold Coast.

About 20,000 schoolies are expected attend the first week of celebrations, prompting extra police officers called on to keep watch over school leavers.

But authorities have said the first night kicked off “spectacularly”, with only four people arrested on seven charges. 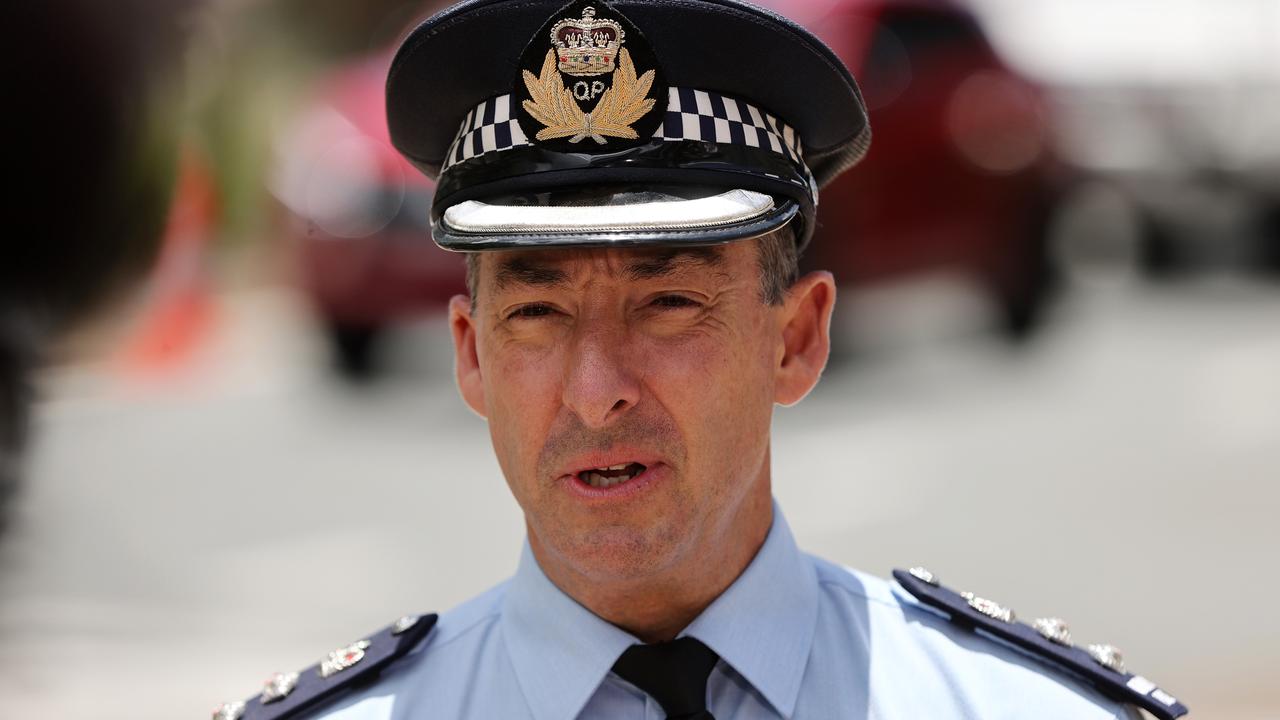 Gold Coast District Acting Chief Superintendent Rhys Wildman said only four people were arrested on the first night of schoolies on the Gold Coast – almost identical to last years’ numbers despite an extra 10,000 attending this year.

Police Commissioner Katarina Carroll was one of the officers patrolling the schoolies precinct for several hours last night, telling reporters on Sunday she found it extremely well-behaved.

“It has started off fantastically, I think it’s one of the best starts we’ve ever had to schoolies,” she said. 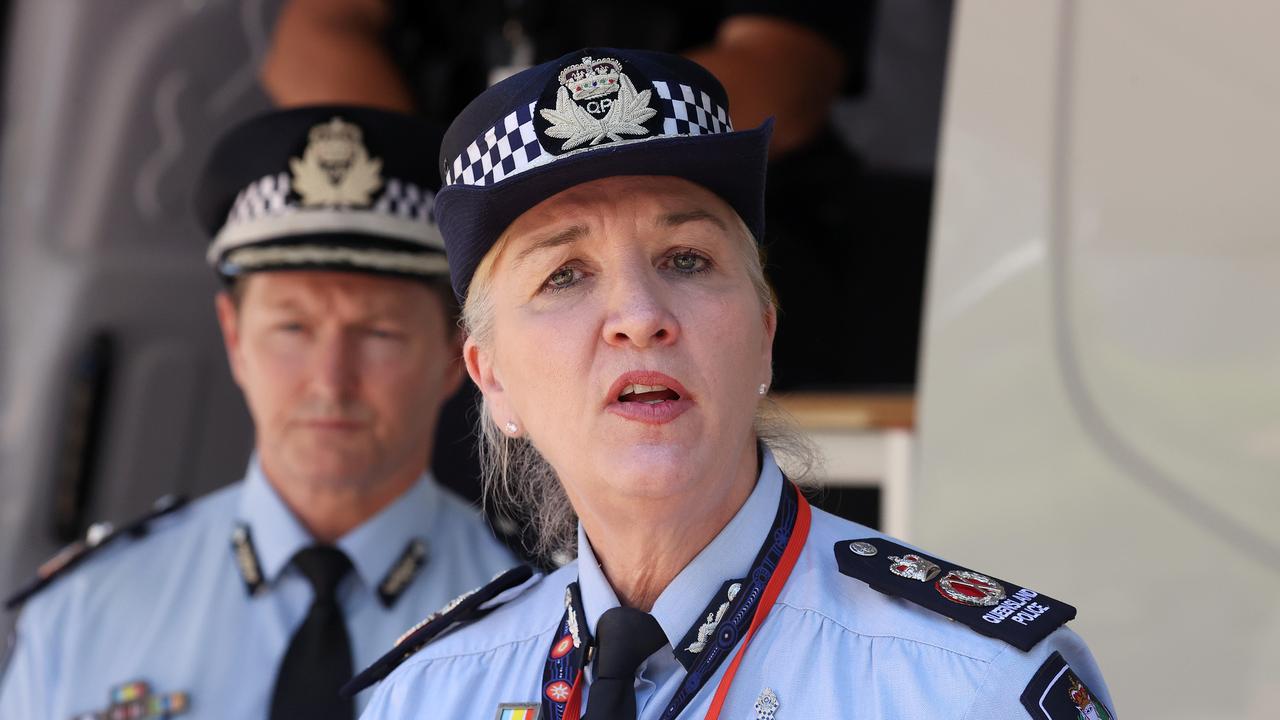 On the same night, three adults were arrested for carrying knives, all in Broadbeach, Superintendent Wildman said.

This was out of hundreds of wanding trials conducted on the Gold Coast – sparked after the death of teenager Jack Beasley in 2019.

Jack’s parents Belinda and Brett Beasley have been actively involved in the wanding trial with police to discourage knife crime in the Glitter Strip.

Police Minister Mark Ryan had earlier warned this year’s graduates to avoid the mistakes of years past.

He said while Schoolies had become an Australian “rite of passage” for many, it was important to put safety first.

“I urge all young people to look out for their mates, stick together, and check in on one another. Take note of your surroundings and take care while on high-rise balconies.

“Charge your phones, plan ahead and check in with your loved ones back home.

“And remember – no one likes a ‘Toolie’. Leave this week to the young people who have worked hard and deserve to celebrate their accomplishments responsibly.” 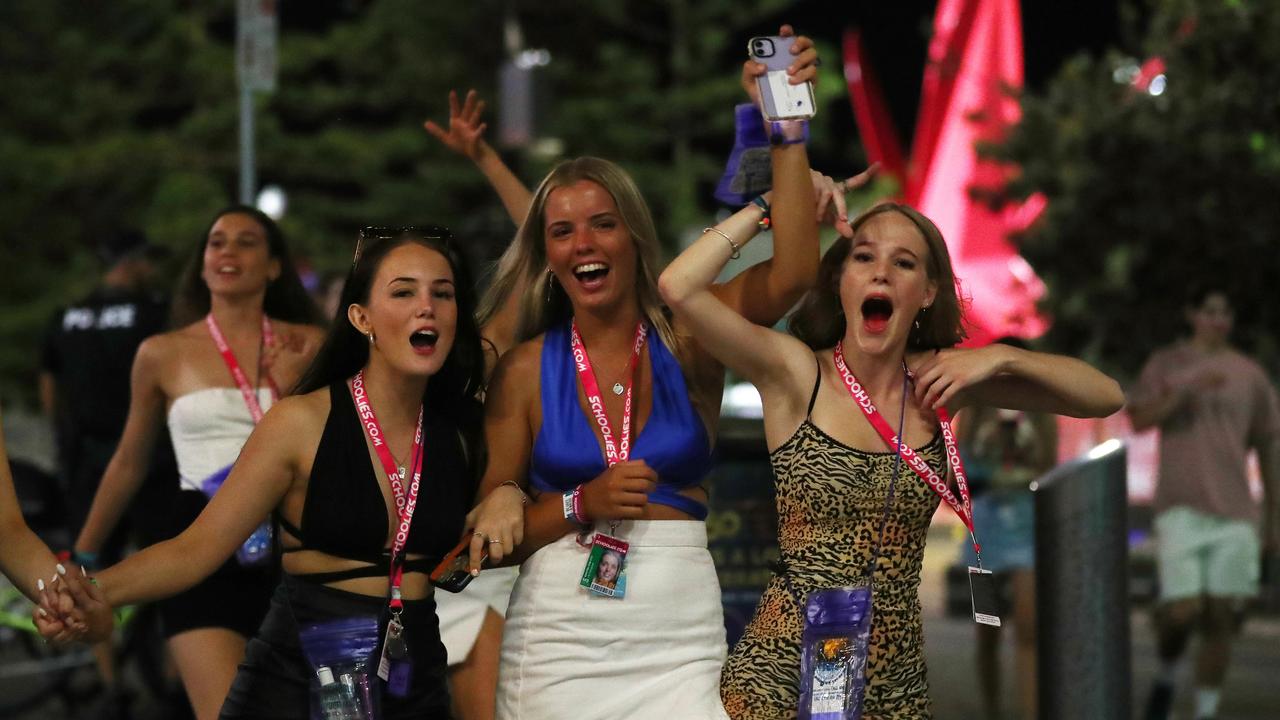 Schoolies from across the country will be celebrating at Surfers Paradise events all week. Picture: Jason O’Brien / Sunday Mail

In 2019, Melbourne graduate Charlie Scott died after falling from a high-rise hotel balcony.

The 18-year-old had been celebrating with friends when he fell from the Hilton Tower about 2.30am in the morning.

One year earlier, Hamish Bigood, fell from an 11th-floor balcony at the Surf Regency apartments on the Gold Coast.

His father told The Daily Telegraph at the time that his son had been hallucinating after drinking and inhaling nitrous oxide.

He called for the canisters, colloquially known as ‘nangs’, to be banned and said the apartment blocks rented to students during schoolies should have the balconies sealed off. 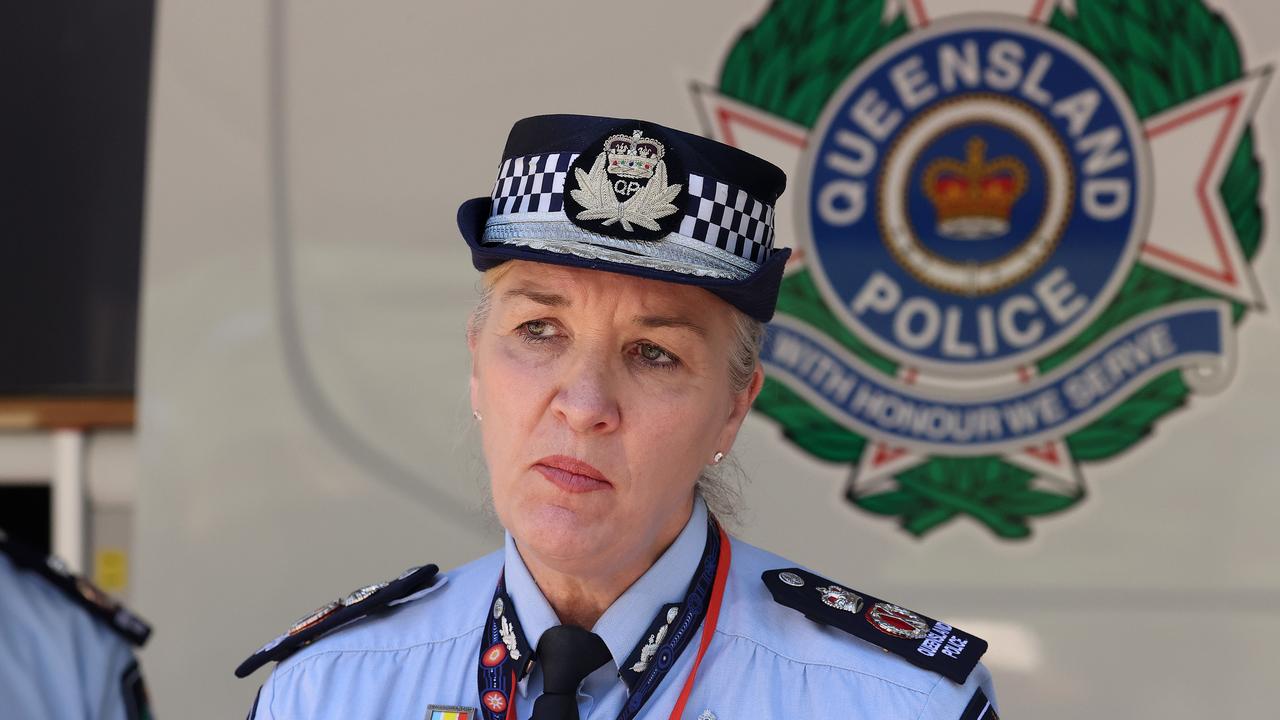 Police Commissioner Katarina Carroll urges Schoolies to be vigilant when celebrating the end of their schooling. Picture: Liam Kidston

Queensland Police Commissioner Katarina Carroll said earlier there would be an increased police presence on the Gold Coast this week, with an estimated 130 officers on duty each night in the Schoolies precinct.

“The police are here to keep everyone safe,” Commissioner Carroll said.

“I would encourage young people to strike up conversations with the crews at Schoolies this week.

“We are here to support school-leavers, and would encourage them to visit the integrated health and wellbeing space if they require any emergency medical services and assistance, including access to specialist mental health support.

Police will conduct random wanding for concealed weapons within the Safe Night Precinct, while governing bodies will conduct venue checks for underage and fake IDs. 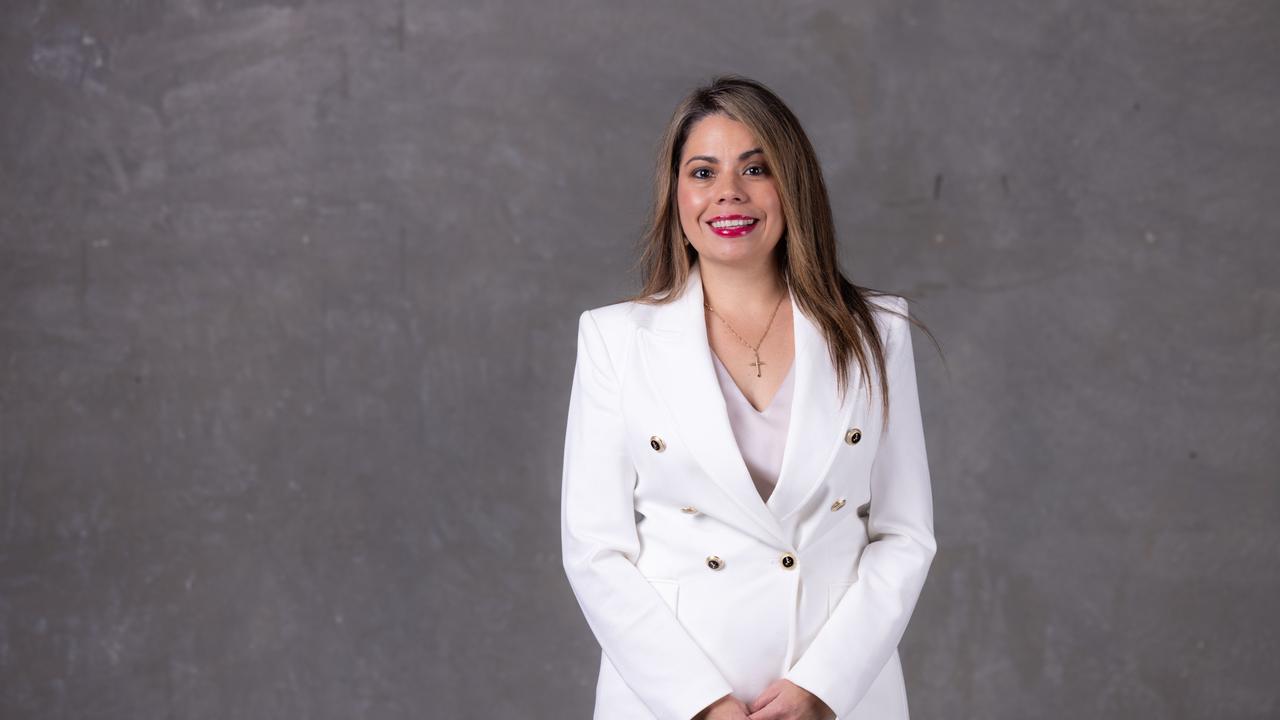 School leavers are encouraged to visit Recharge Zones located within the Schoolies Hub and along the Esplanade if in need of water or assistance.

“We know it has been a really difficult two years and hope that this year’s school leavers can celebrate together and make the most of the Gold Coast’s incredible line up of experiences on offer,” Ms O’Callaghan said.

“Accommodation providers are telling us that bookings are strong, and we anticipate the economic benefit will flow throughout the region.” 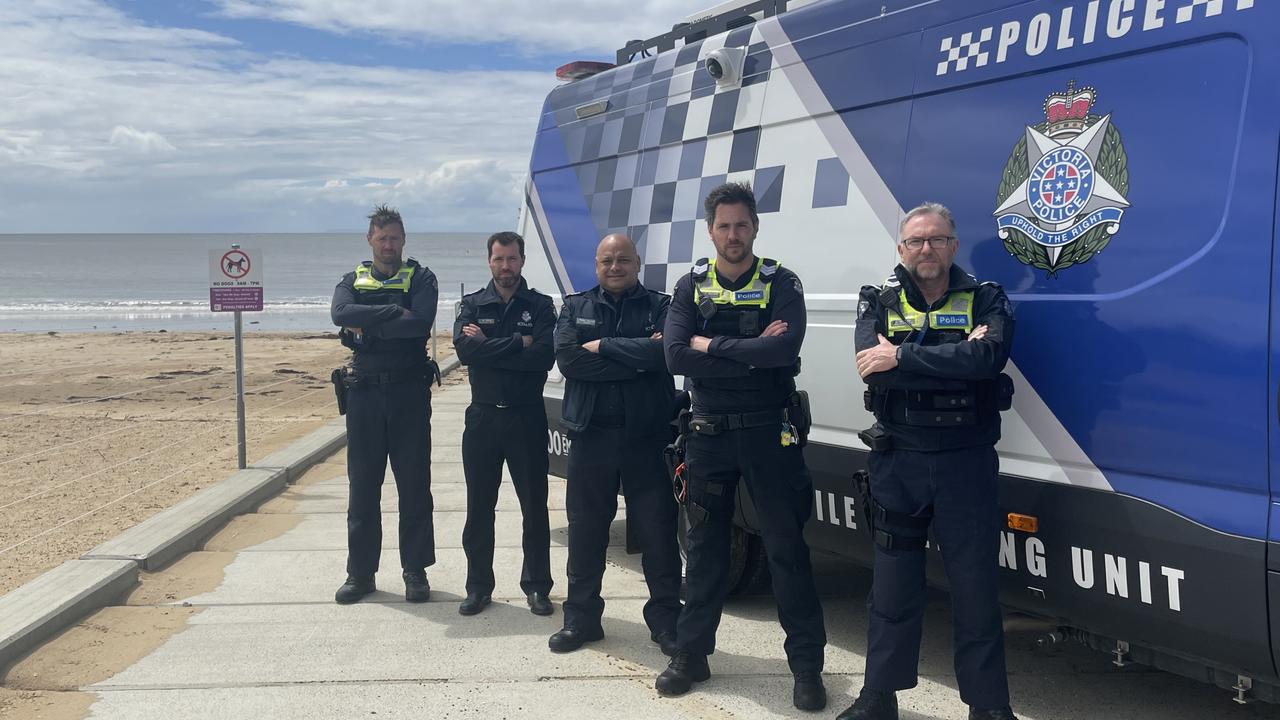 Police will be out in force across the country ahead on schoolies celebrations.

Other states are also preparing for thousands of schoolies to celebrate in their towns.

Just under 10,000 school leavers are set to celebrate schoolies on the Mornington Peninsula in Victoria this year, while another 3000 are expected on the Bass and Surf Coasts in towns such as Phillip Island, Cowes and Torquay.

The Herald Sun reports school leavers heading to Mornington Peninsula, Phillip Island and the Surf Coast are being asked to front up to $2500 for bonds and guarantees they will not make excessive noise in residential areas.