WARNING: First Nations readers – this story contains an image of a deceased person.

Channel 7 has been named the worst offender when it comes to a lack of cultural diversity on Aussie news and current affairs programming, according to a new report.

However broadcasters across Australian television were slammed in the report, “Who Gets To Tell Australian Stories? 2.0” from Media Diversity Australia (MDA), with one of the report’s authors saying on-screen representation “doesn’t even come close” to mirroring Australian society.

In fact, the report found that while Australia’s non-European population was 24.7 per cent, the same demographic made up just 6.1 per cent of appearances in televised news media and a current affair programs. 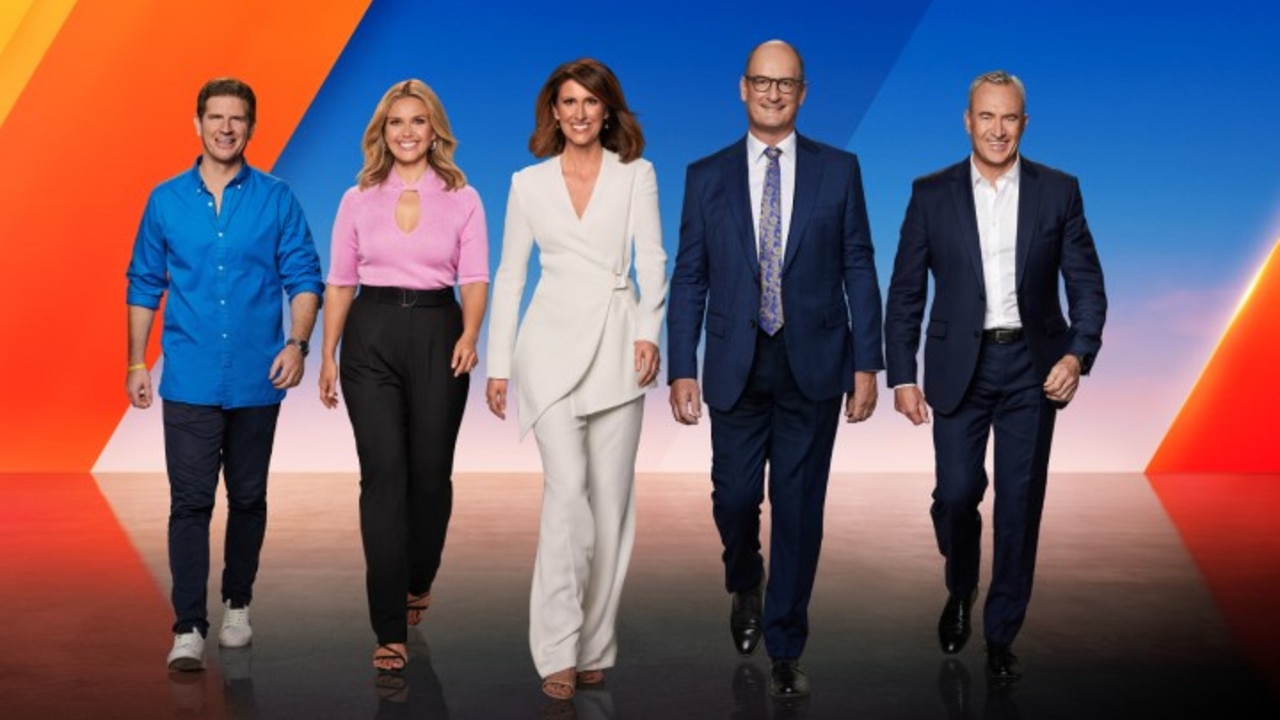 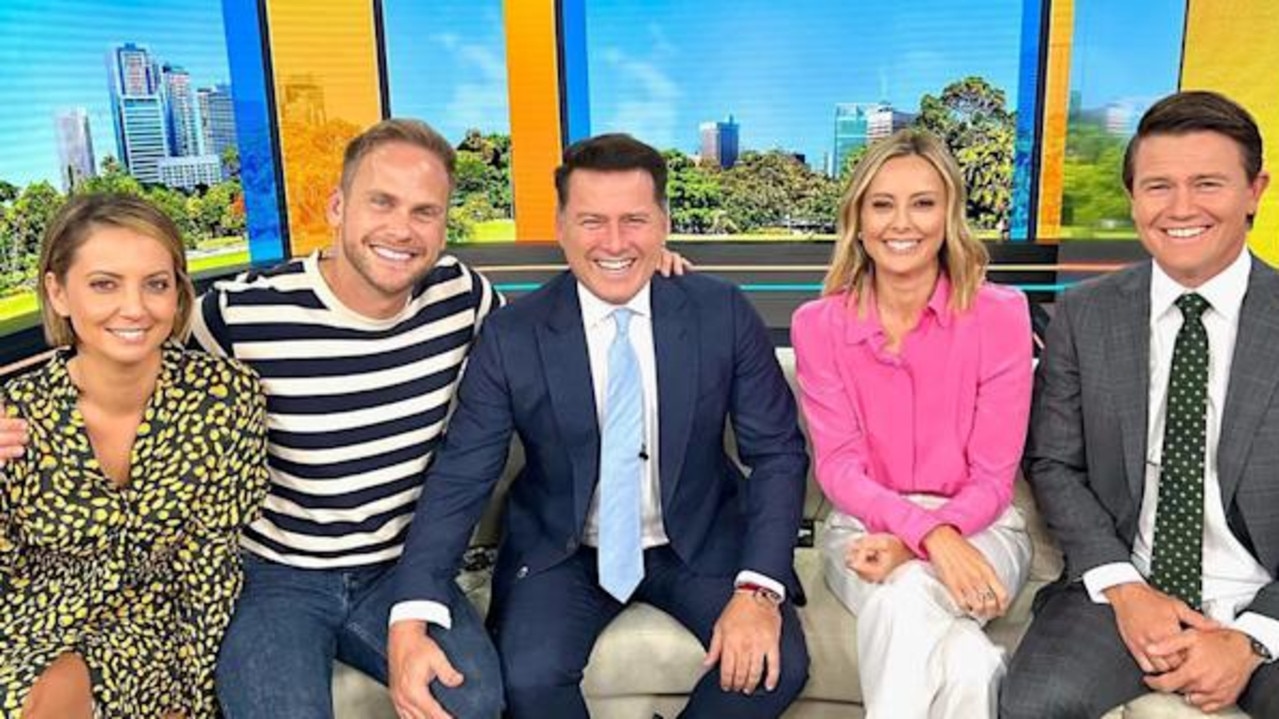 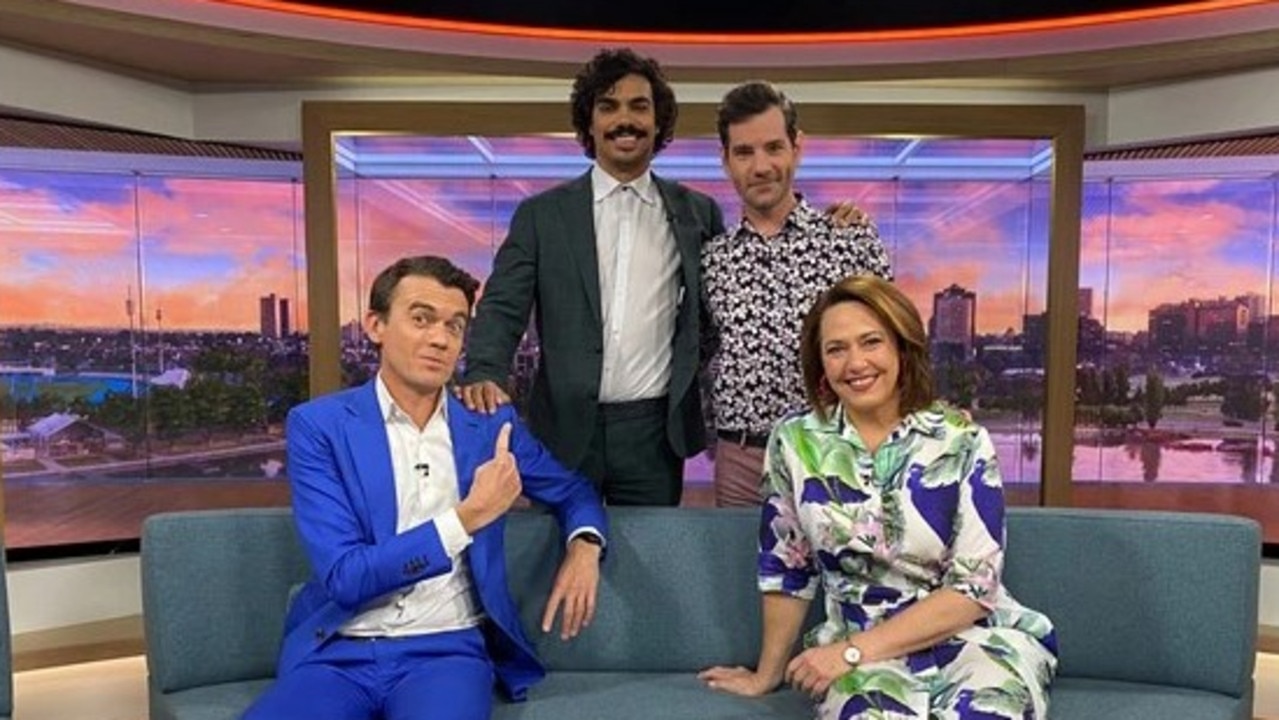 Slightly better but not good enough

Lead academic and author of the report, Associate Professor Dimitria Groutsis said while “some progress” had been made in on-screen representation, it “doesn’t even come close” to being a true reflection of Australian society.

The report took a two-week slice of news and current affairs shows on free-to-air channels, analysing the diversity of presenters and reporters. They were placed into four categories based on their cultural background: Anglo-Celtic, European, non-European and Indigenous.

Anglo-Celtic on-air talent was over-represented across all networks except for SBS and NITV which is largely produced and presented by Aboriginal and Torres Strait Islander people. 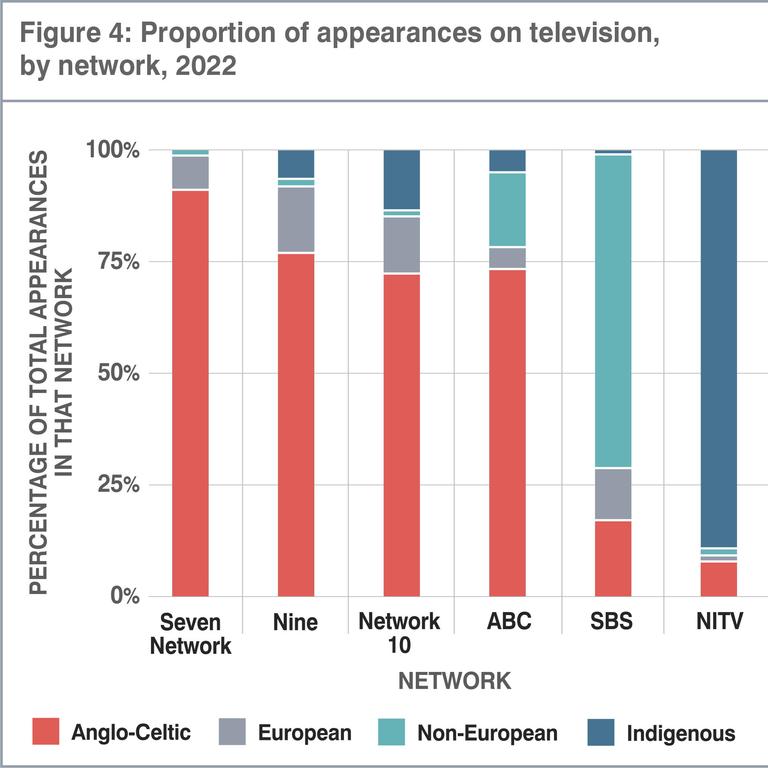 European representation fared slightly better. Seven had 8.1 per cent of on-air appearances from talent of European background. This figure increased to 13.2 per cent on Ten and 15.4 per cent on Nine.

On the ABC, 16.8 per cent of presenters and reporters were from culturally diverse backgrounds, with 4.7 per cent reported as being European. 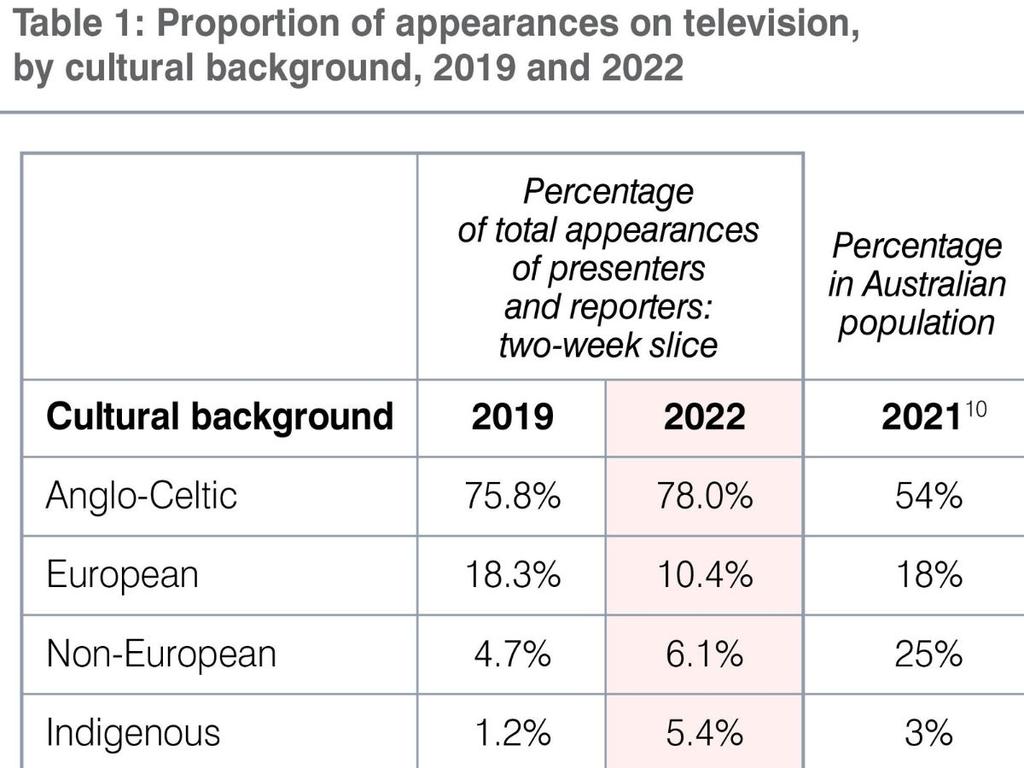 However, Seven, Nine, the ABC and SBS all queried the report’s methodology used to collate the data.

SBS questioned why its Arabic and Mandarin news programs weren’t captured in the data, and a Seven spokesperson said the data should encompass the entire programming – from current affairs, to reality and entertainment.

Seven also pointed to recruitment efforts to employ “professionals from diverse backgrounds across all areas of the business”.

“We hope to work constructively on the next report to ensure that the methodology is more robust and the analysis accurately assesses a representative data set,” the network’s statement said.

The lack of diversity led to a lack of trust among some Aussies in the news they were watching on TV.

One of the key findings of the report was that non-European demographics had lower levels of trust, with more people in this group saying they had stopped consuming the news “because they thought it was biased”.

MDA’s Antoinette Lattouf pointed to the “inflammatory reporting” and policing of western Sydney and southwestern Sydney during the NSW 2021 Covid lockdowns as an example of reporting that breeds mistrust in minority demographics.

She also listed the highly racial reporting of Melbourne’s gang violence and the delayed reporting in the death of Indigenous boy Cassius Turvey, 15, after he was allegedly attacked while walking home from school. 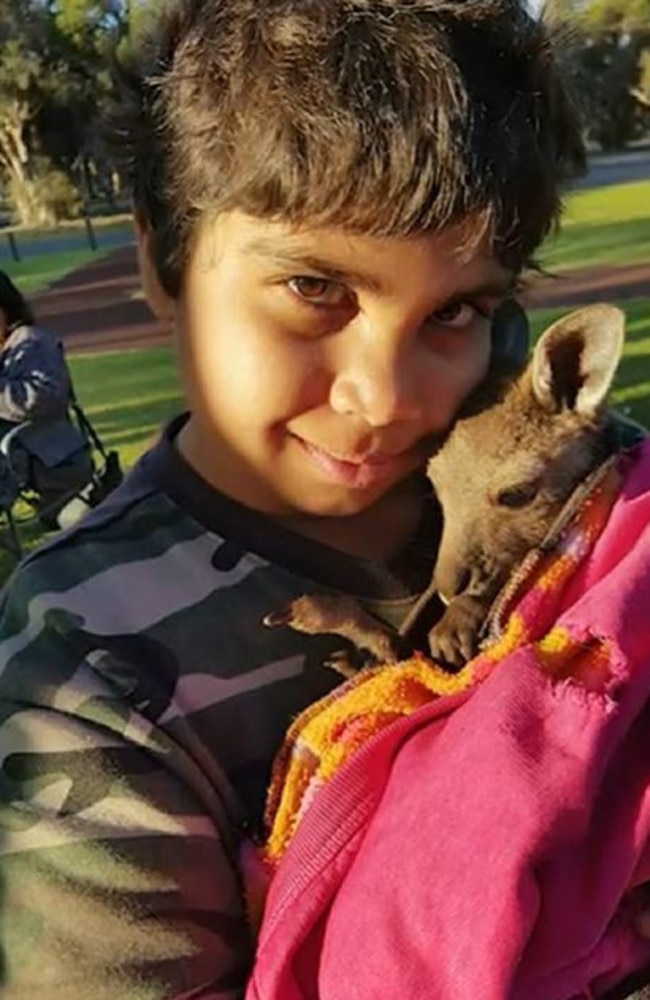 Several media outlets were criticised for their lack of coverage over the death of Indigenous teen, Cassius Turvey.

More worryingly, she said, was the dangerous implications a crumbling trust among minorities could lead to.

“There was a direct correlation between people who were born in the Middle East and North Africa and their likelihood of dying from Covid,” Ms Lattouf told news.com.au.

Australian Bureau of Statistics (ABS) data found people in these demographics in Australia were 10 times more likely to die from Covid.

“From my point of view, and coming from that community and seeing the often divisive and also unrepresentative coverage of Covid from those hotspot LGAs, I can understand why there was a lack of trust in institutions, including the media,” she said.

“This poses so many threats. It’s a business threat, it’s a social cohesion threat and it’s also a threat to the to the prosperity and safety of these communities.” 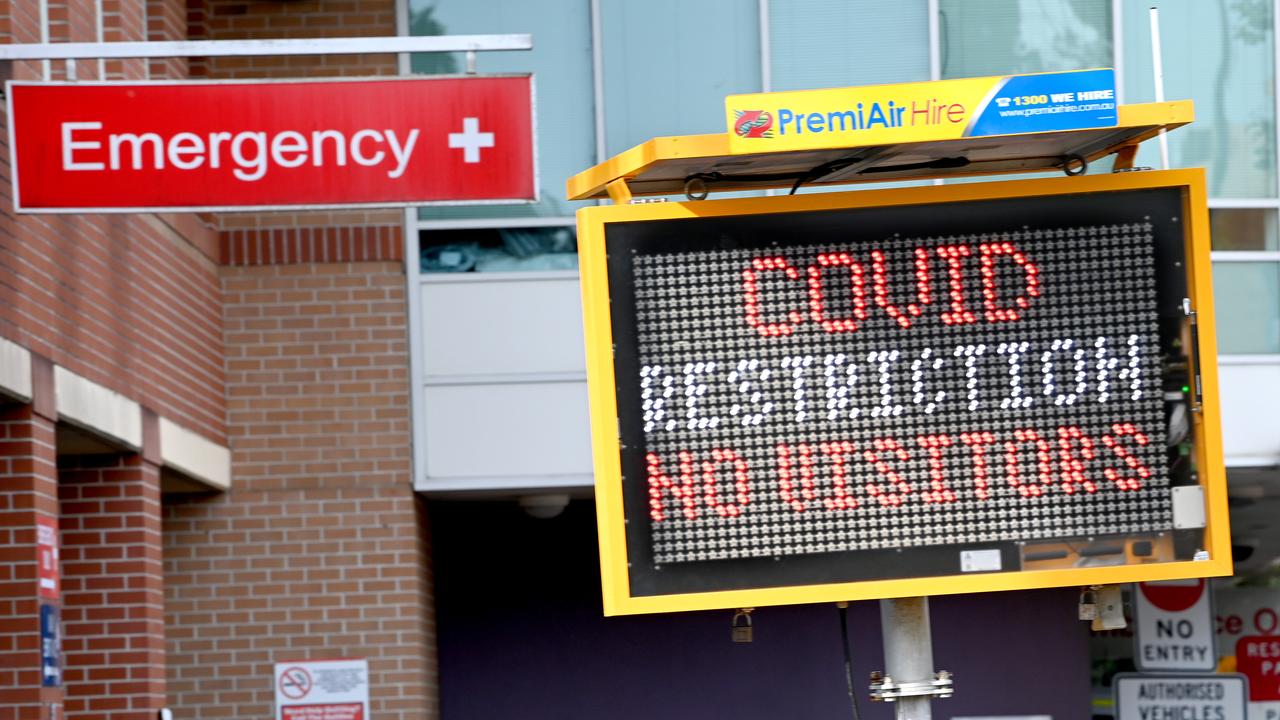 But Ms Lattouf said regaining the trust of audiences who had become disillusioned was “pretty simple”.

“It’s having people who reflect the Australian population in editorial leadership positions, calling the shots on what is covered and how it’s covered,” she said.

“It’s having journalists on the ground who have skin in the game who also come from these communities so we get better, more varied and more nuanced coverage.

“Yes, this change takes time, but what the report has shown is that Australia continues to lag behind similar Western democracies.”

Although Indigenous on-screen talent rose from 1.2 per cent to 5.4 per cent of total appearances, Dr Groutsis said that was centred on single gains of on-air talent, including names such as Ten’s Narelda Jacobs, ABC’s Stan Grant, Miriam Corowa and Tony Armstrong and Nine’s Brooke Boney.

“That’s significant because of the psychological, emotional and workload someone takes on in being the representative and the talent that is constantly presenting and representing that community,” Dr Groutsis said.

“But there was positive gains and we can’t underestimate that.” 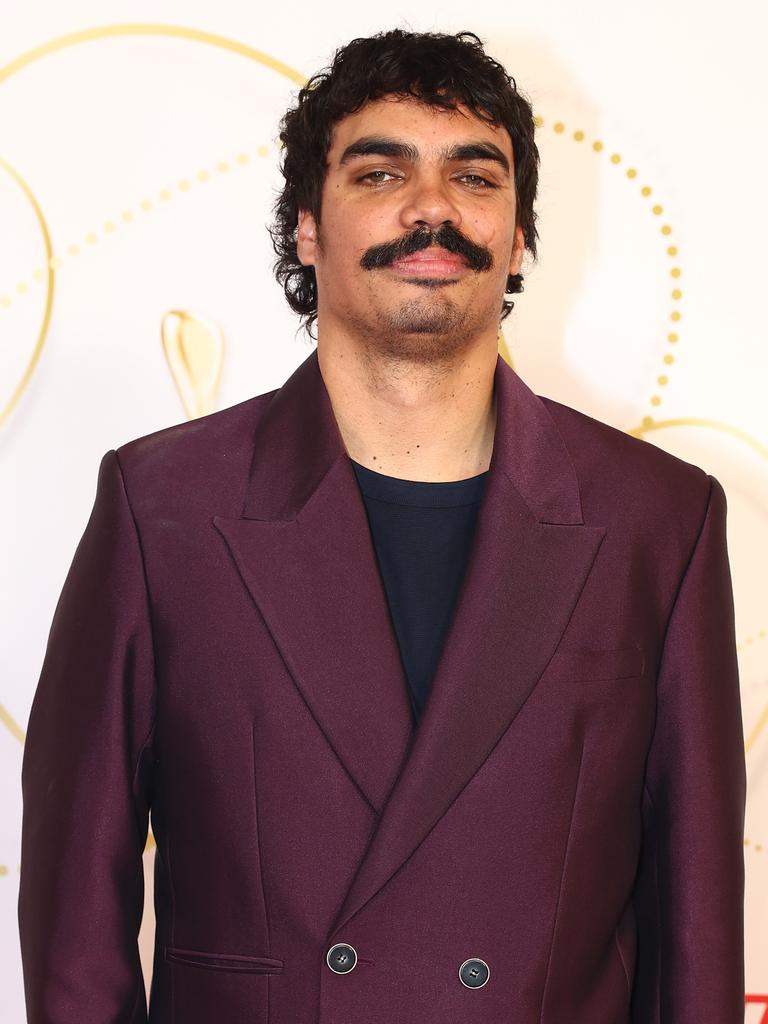 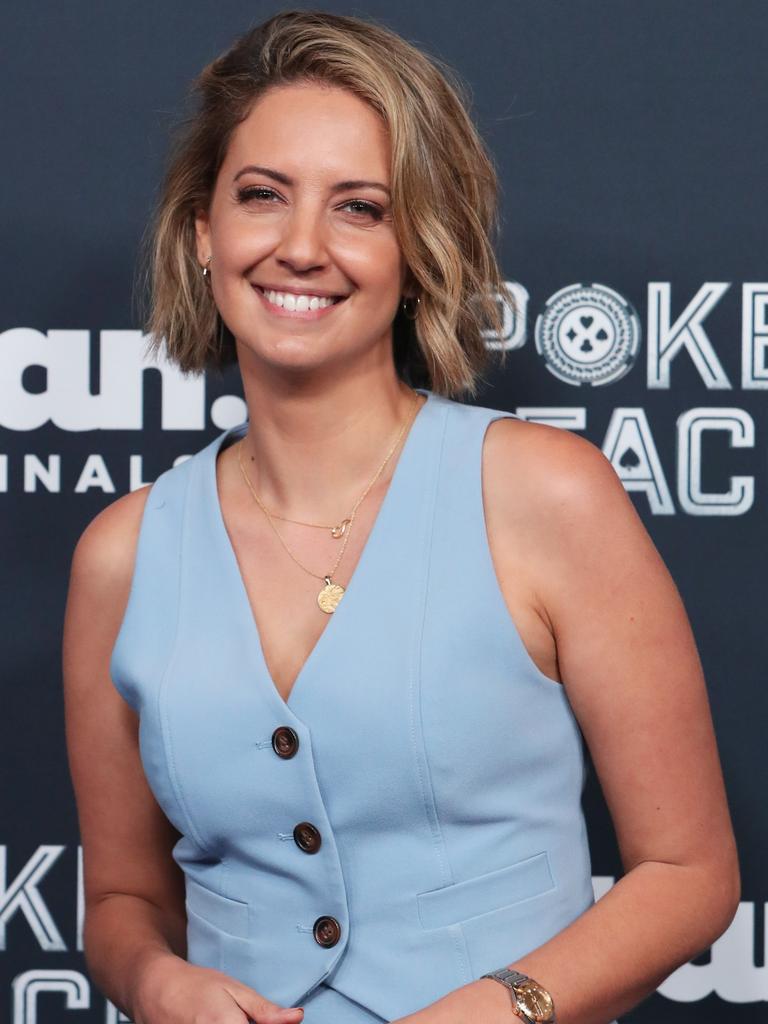 Associate Dean for Indigenous leadership and engagement at the University of Technology Sydney, Professor Nareen Young, who co-authored the report, noted Jacobs’ “brave” and considered coverage of Cassius’ death, who was revealed to be her nephew.

Speaking on Studio 10, Jacobs, a proud Whadjuk Noongar woman, pointed out the lack of coverage of Cassius’ death on commercial TV.

“Where has Channel 7 and Channel 9 been? I’m just calling them out. You need to come and you need to give a voice to the pain. You have been completely absent in this whole conversation,” she said.

“Australians have had enough of this, and we’re going to be standing in solidarity with Cassius’ family, who is also my family, so please turn out.” 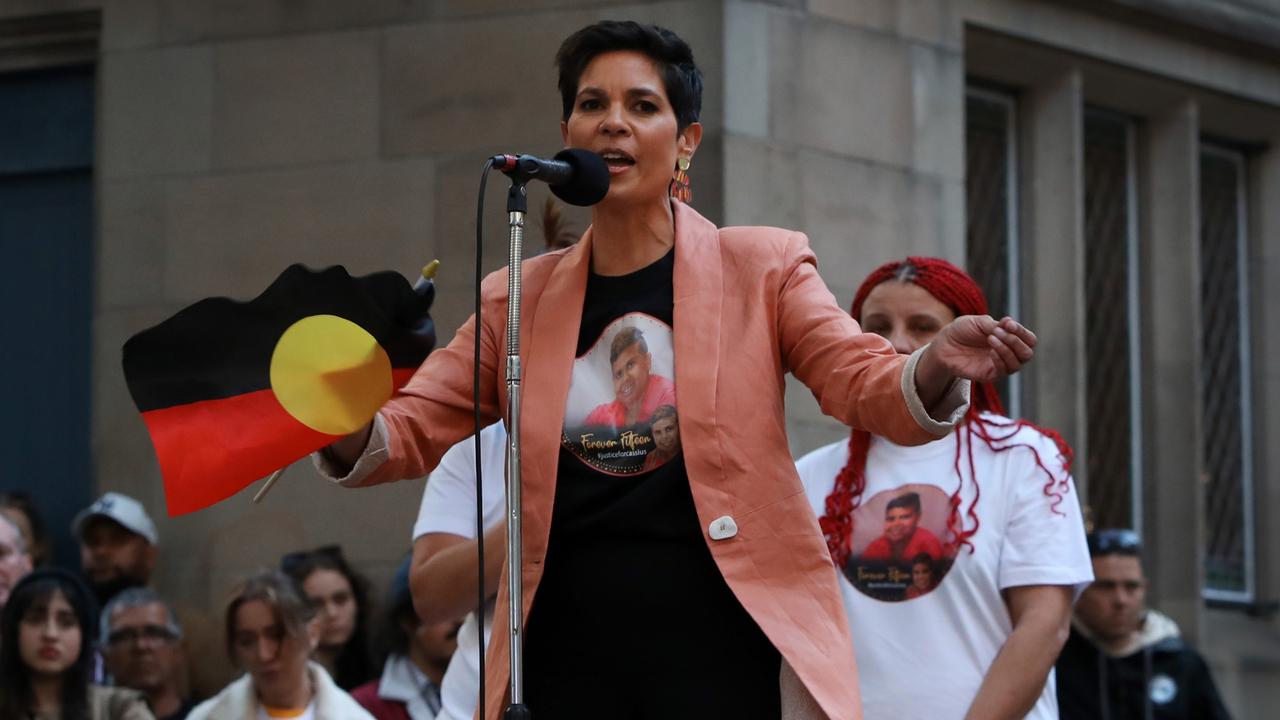 Prof Young said compared with industries like accounting, advertising, finance and business, the media industry was “pathetically” behind.

“The business case is really obvious: People will purchase what represents them. You don’t need to be a genius to work that out,” she said.

“In terms of Indigenous people, for example, there’s no question Indigenous people have been excluded from the education system and the employment market and big organisations have a responsibility to be leaders in changing that and turning that around.

SBS’s board was the only one that contained people from Indigenous, Anglo-Celtic, European and non-European backgrounds. It was also the only network (excluding NITV) with Indigenous representation. 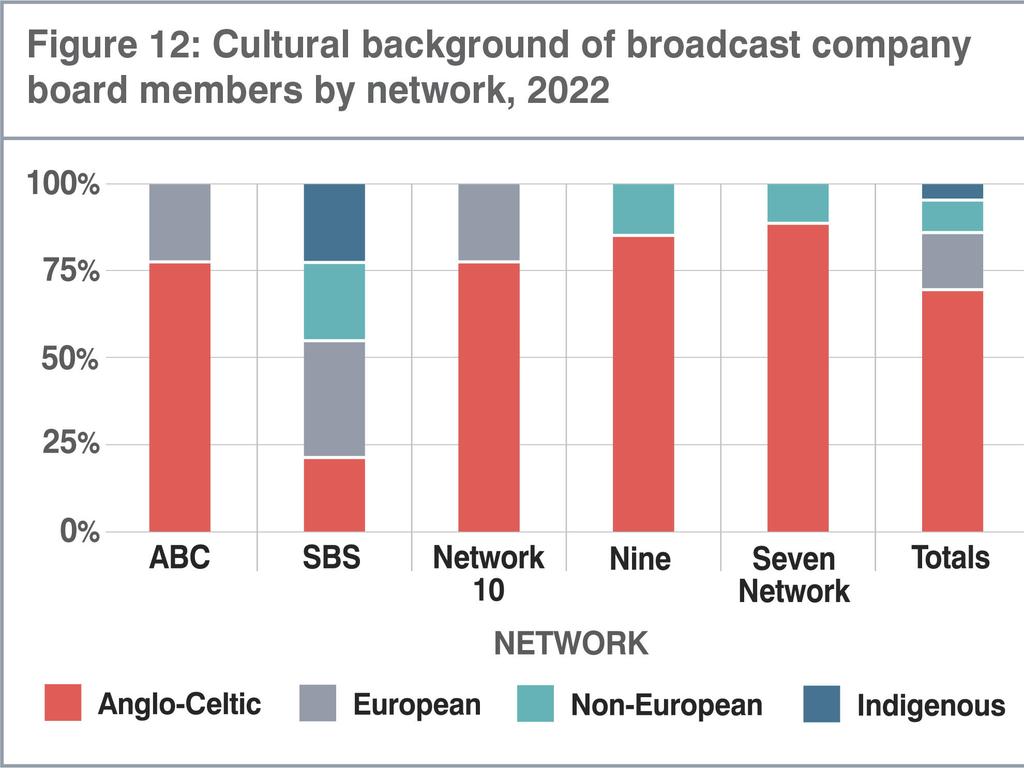 The cultural background of network board leaders were overwhelmingly from Anglo-Celtic backgrounds. Picture: Media Diversity Australia 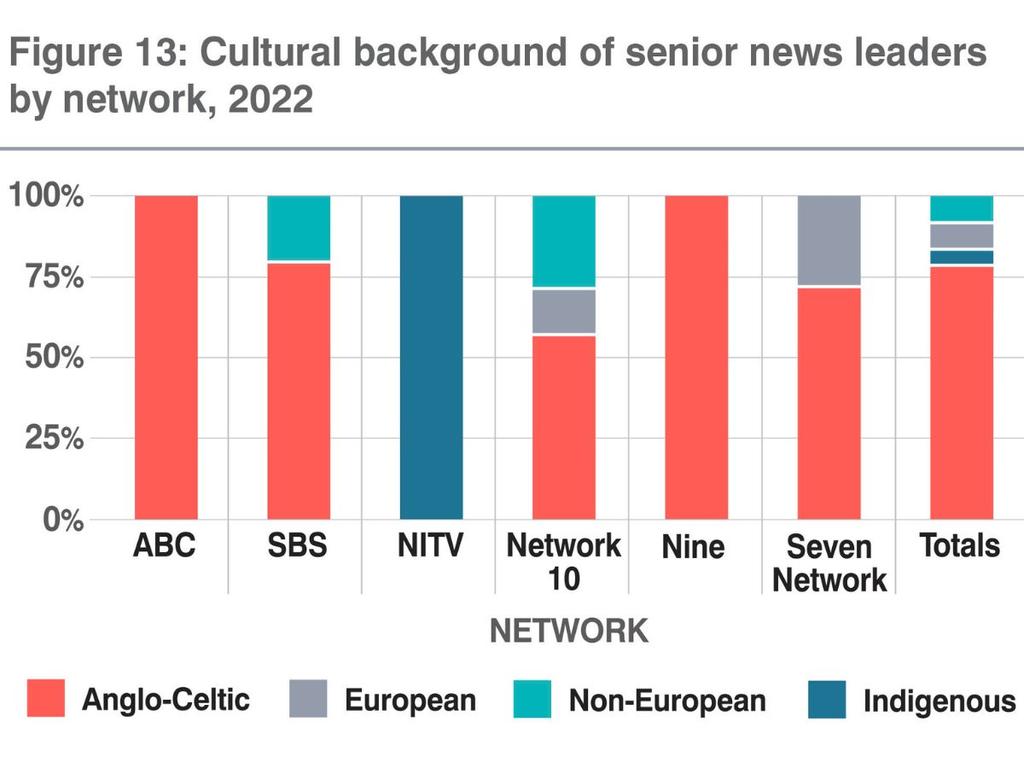 The report found that the senior TV news leadership at the ABC and Nine were of Anglo-Celtic cultural backgrounds. Picture: Media Diversity Australia

Dr Groutsis said the make-up of the leadership was important because they “make the decisions and set the tone of the organisation’s values”. And although progress is being made, it’s not happening swiftly enough.

“When you are making the decisions, you can see things differently,” she said.

“Change happens from the top.”

While all the networks analysed in the report are members of Media Diversity Australia, concerns were made by Seven, Nine, the ABC and SBS when it came to the methodology used to collate the data. Ten declined to respond to news.com.au’s request for comment.

SBS – which boasts the highest levels of culturally diverse on-screen staff – questioned why its Arabic and Mandarin news programs weren’t captured in the data. The network’s director of news and current affairs Mandi Wicks said it was “disappointing these bulletins were not included in the report as they represent important additions in the Australian media landscape”. 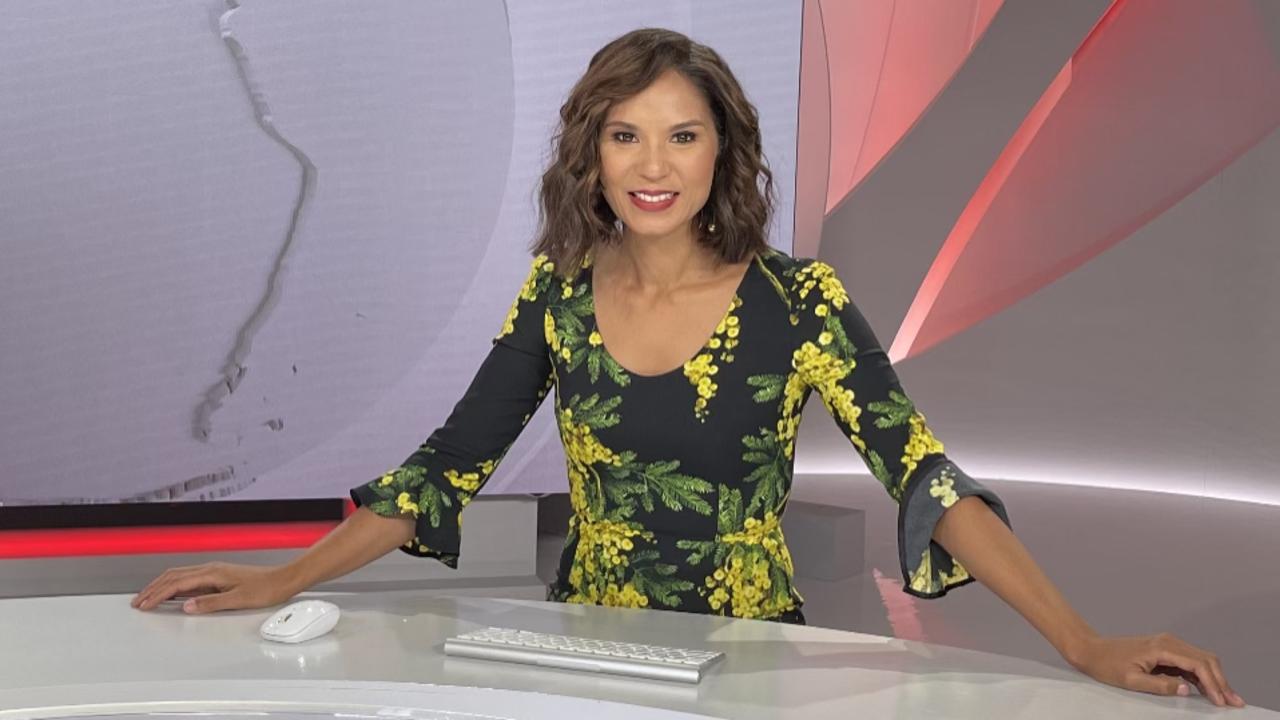 A Nine spokesperson said that while the station acknowledges “there is more work for the industry to do”, they called for the report to reflect the gender diversity observed among their senior teams.

“We have raised concerns on the methodology of this report that has failed to reflect significant diversity, particularly in its reporting of female representation,” the spokesperson said.

“The failure to include, for example, two of the Nine Network’s most senior news executives – the female executive producers of 60 Minutes and A Current Affair, who report directly to the national news director – undermines the credibility of this report on diversity in the media.” 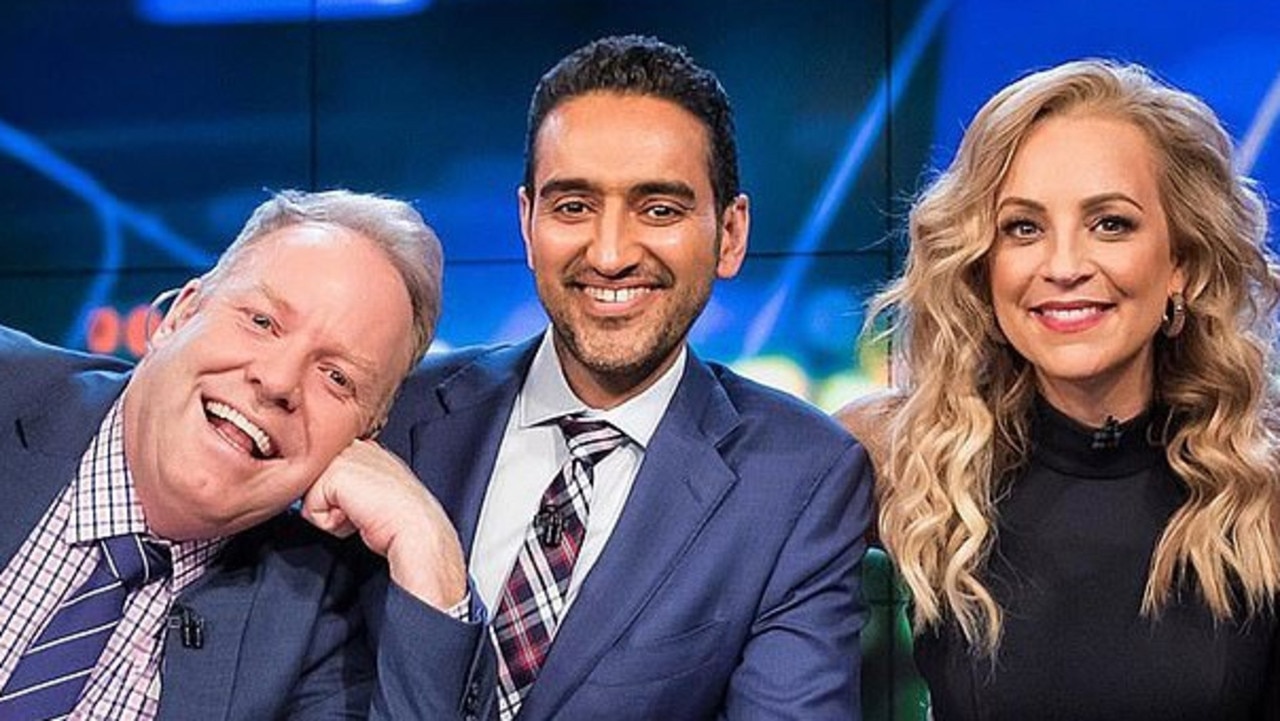 Gold Logie winner Waleed Aly is one of The Project’s regular co-hosts.

A Seven spokesperson also called on data to encompass the entire programming – from current affairs, to reality and entertainment. They also pointed to recruitment efforts to employ “professionals from diverse backgrounds across all areas of the business”.

“People watch news they trust, and Seven is home to the most watched and therefore most trusted news and public affairs content in Australia, with 37 per cent more people watching 7 News each weeknight in 2022 than the nearest competition,” they said.

“We hope to work constructively on the next report to ensure that the methodology is more robust and the analysis accurately assesses a representative data set.” 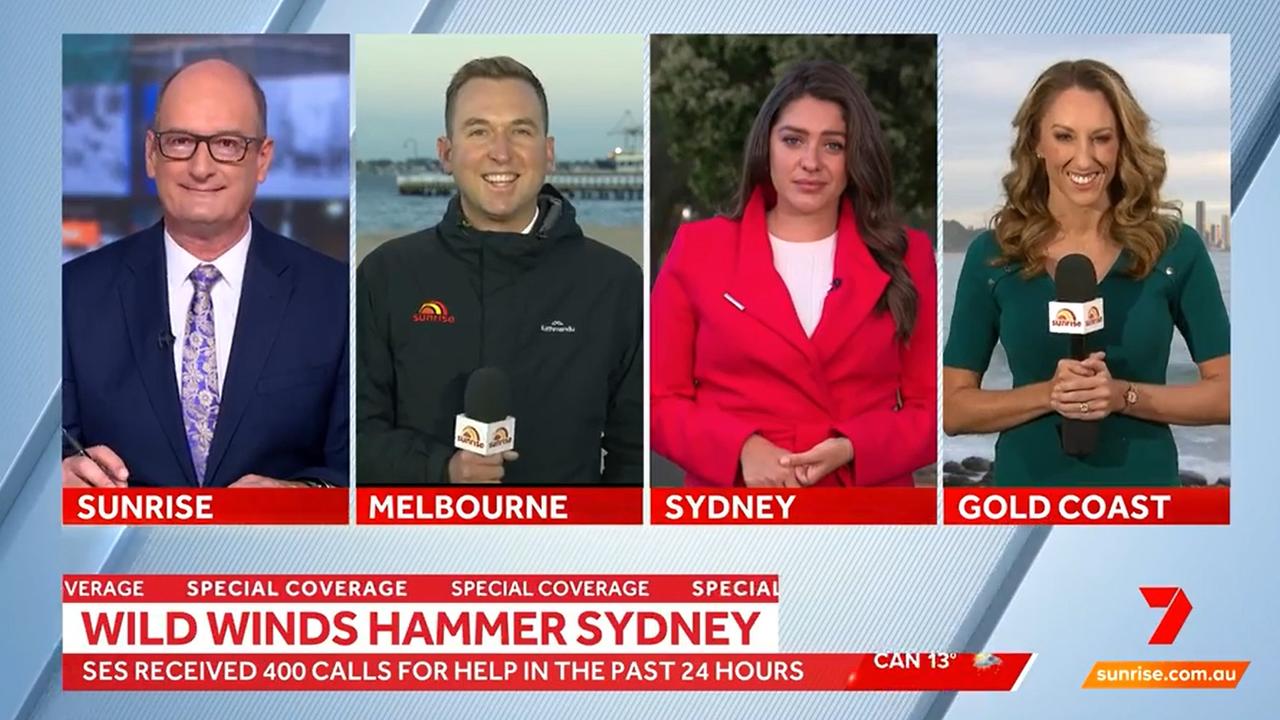 While Mr Fang said there was “still much work to do” within the media industry, he said the two-week reporting period was a “very small slice”.

Like Seven, he also called on a greater cross-section of content format (including digital, social, video and radio) and program type to be accounted for. 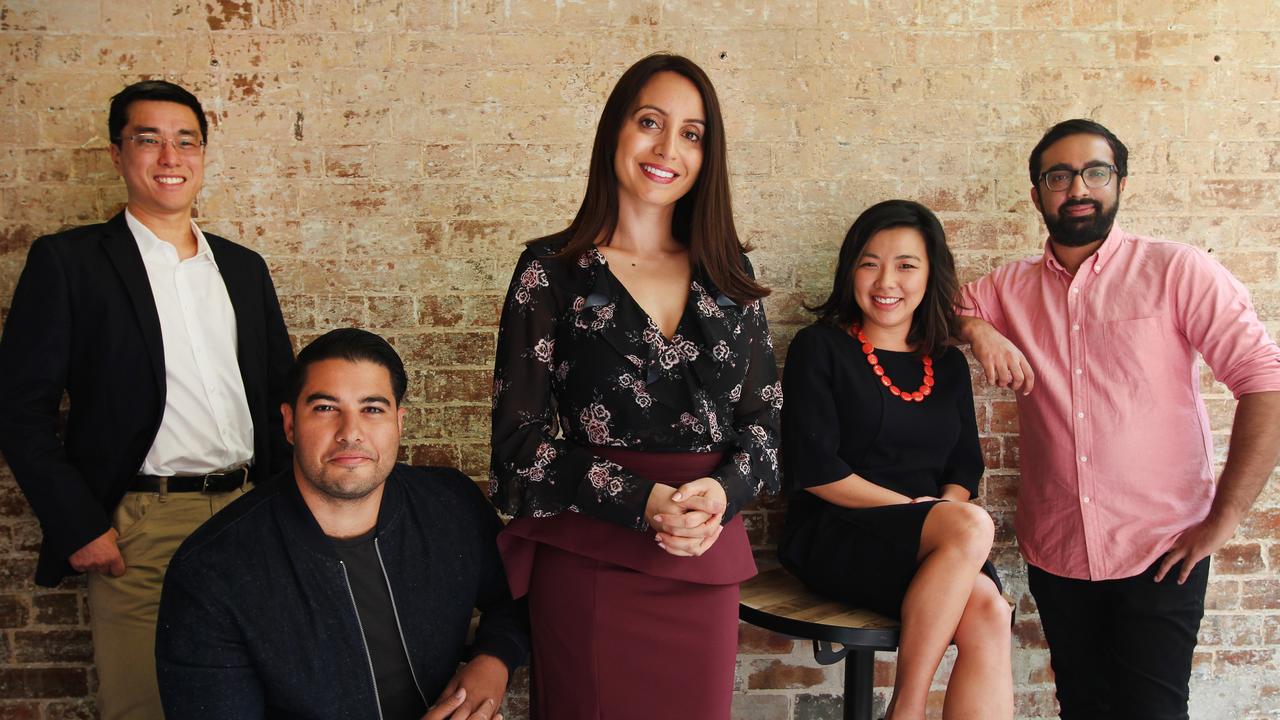 Dr Groutsis, however, stood by the findings and acknowledged the potential for further research However, she said that is limited by funding constraints.

“There are a few ways to approach this moving forward. Networks can help fund this very rigorous and time-consuming research; they can collect and release these metrics themselves as we suggested in our 2020 report,” she said.

She also said regular reporting will show the critical gaps within the industry and lead to greater change.

“Once we measure, things get done,” she said.

“I see a great role for MDA as an organisation in keeping the pressure on but also in assisting networks in steering these difficult conversations and processes and creating systemic change.”