Video footage has captured the moment an unhinged – and unlicensed – Australian sovereign citizen was dragged from her car after an embarrassing showdown with police officers.

The video, which was shared on social media on January 21, was filmed from inside the vehicle, and shows the exchange between the female driver and several officers.

It begins with the motorist narrating the story in a broad Australian accent, telling viewers: “I have been pulled over by the police …”

Do you have a similar story? Contact [email protected]

An officer then approaches the vehicle and simply asks the woman to state her full name, but is repeatedly interrupted by the driver, who instead asks him for his name and whether his “video” is turned on.

“Now just stop talking for a second, and listen to what I’m asking you – what’s your full name?” the officer, who states his name and confirms he is from Gold Coast Highway Patrol asks, only to be told: “I do not consent”. 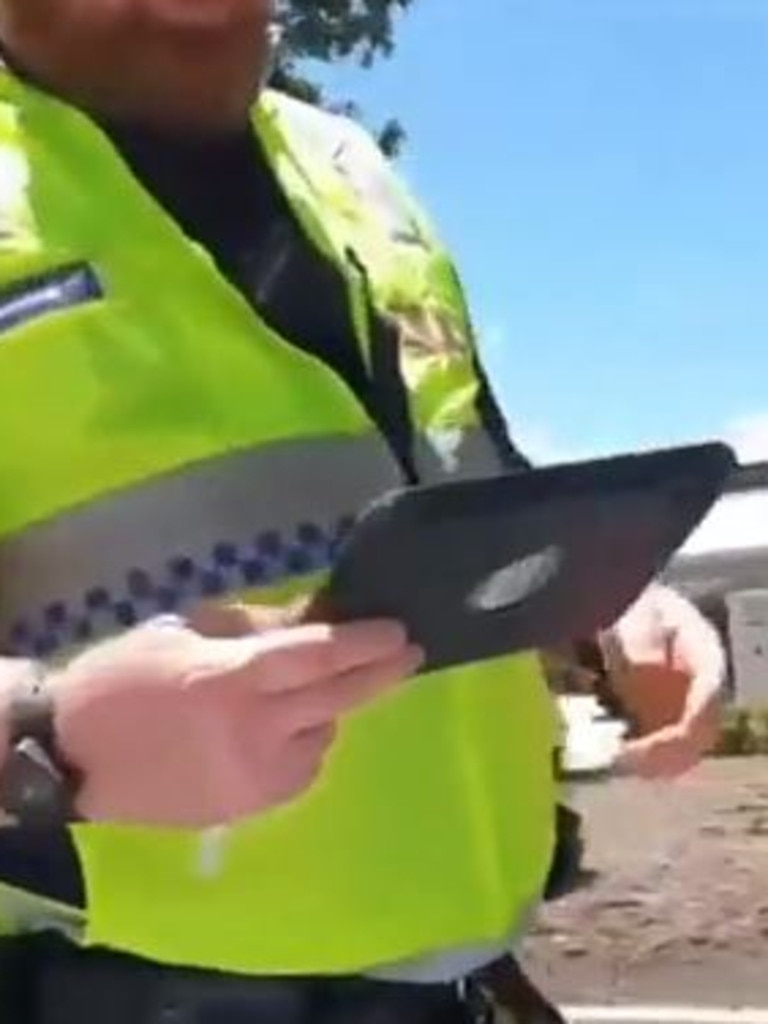 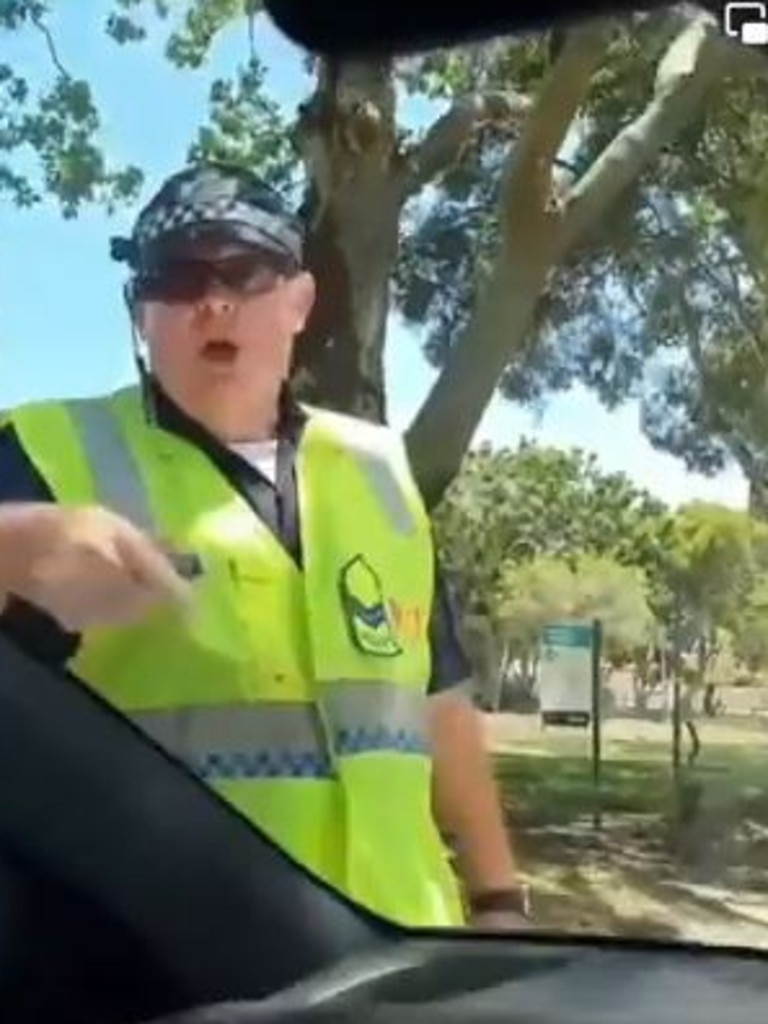 But the driver refused to co-operate. Picture: Twitter/@SarkySage

The officer then replies: “You’re going to be arrested shortly for failing to provide your details”, before the woman interjects once again, asking: “Under what law?”

“I’m speaking to you, I’ve asked you to state your full and correct name and I need to explain about your driver’s licence at the moment,” the policeman says.

“Can I have a say?” the woman bizarrely asks, before continuing: “Why can’t I talk … You’re being very aggressive”.

The policeman then clearly states that if the driver refuses to provide her full name she will be arrested, to which she replies: “What crime have I committed?”

“You are unlicensed at the moment and you’re obstructing …” the officer replies, before being cut off once again.

Finally, police confirm the woman is under arrest, and order her to “hop out of the car” and “turn the car off now”.

“Don’t put that [camera] on me or I’ll bust your window,” the officer says, before the woman once more interrupts, saying: “So this is violence. Is this violence? Under what law?” 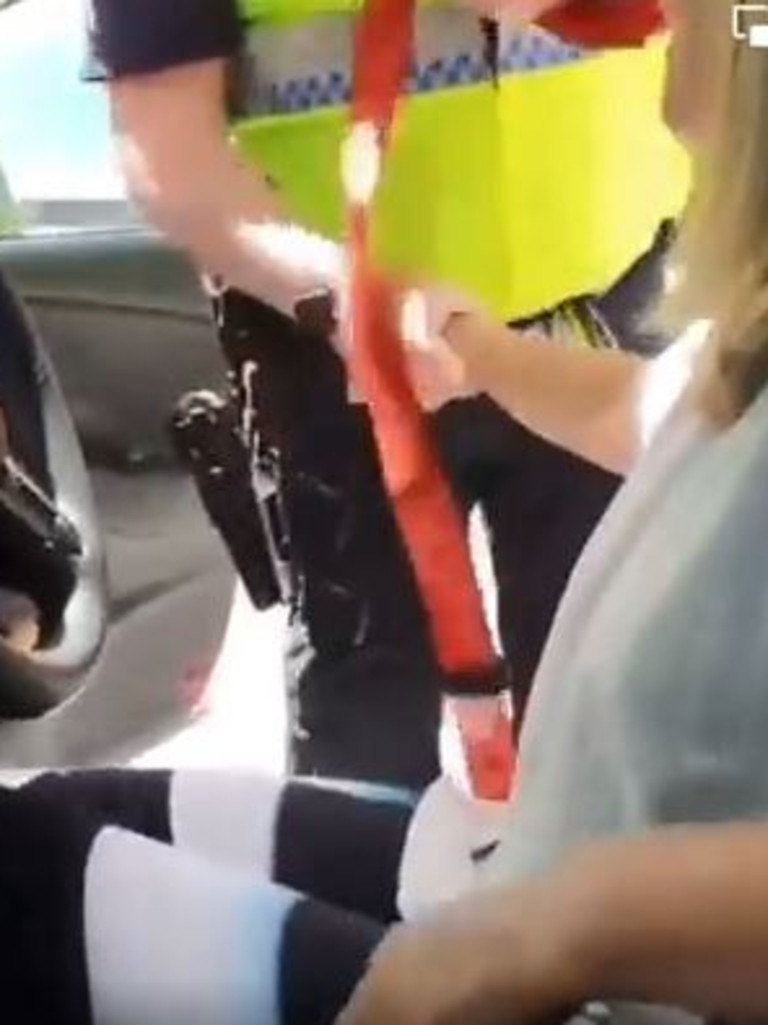 The driver was eventually removed from the car. Picture: Twitter/@SarkySage

The door is eventually opened and the officers are seen grabbing the woman’s arm as she is pulled out by the vehicle, before an officer voices his frustration, saying “my goodness” before the wild clip finally ends.

The footage was shared on social media and was immediately mocked by Australians, who took aim at the odd beliefs of sovereign citizens.

“I love these SovCit arrest videos. Best thing since the Jerry Springer show,” one person posted on Twitter, while another said: “Well she sure showed them by … getting arrested?”

However, while Australians have seen the funny side to this incident, along with a string of other similar recent sovereign citizen arrests across the nation, there is a very dark side to the movement, which gained prominence in the wake of the shocking deaths of three people in December at the hands of the murderous Train family.

Last month, Gareth Train, his brother Nathaniel and wife Stacey gunned down two police officers and an innocent neighbour during a routine missing person inquiry on a Queensland property, with the family later being confirmed as sovereign citizens. 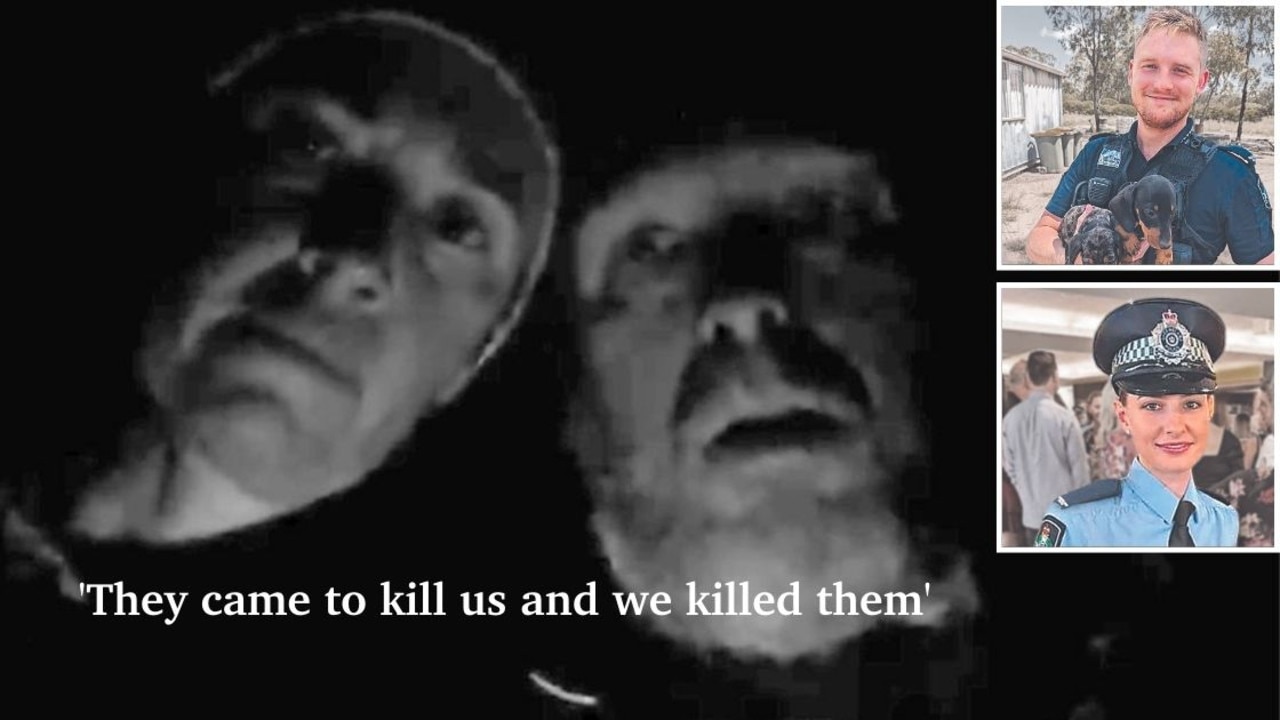 Stacey and Gareth Train, along with Nathaniel Train, gunned down Constables Matthew Arnold and Rachel McCrow, along with their neighbour Alan Dare. Picture: Supplied

Soon after the tragedy unfolded, Deakin University terrorism expert Greg Barton told news.com.au the “grand conspiracy” behind the sovereign citizen movement was the idea the modern nation state is illegitimate, modern laws have an oppressive hold over the population and people need to “be brave and stand up to dictatorial governments and laws”.

“The way they make their case is by doing weird things like driving cars with number plates they’ve made up themselves, writing letters and strange correspondence with weird punctuation and using particular language they believe will somehow deliver them from having to pay tax or other prosecution cases, or driving without a registered vehicle,” he explained.

“On the surface it seems kind of silly, but underneath is a deeply held view that the state is illegal and people need to wake up from the grand conspiracy.

“It’s like The Matrix red pills – people need to wake up to what’s going on and resist.”

In recent weeks, a string of sovereign citizen arrests across Australia have made headlines, with police officers increasingly battling with belligerent citizens who refuse to co-operate and who believe they are above the law. 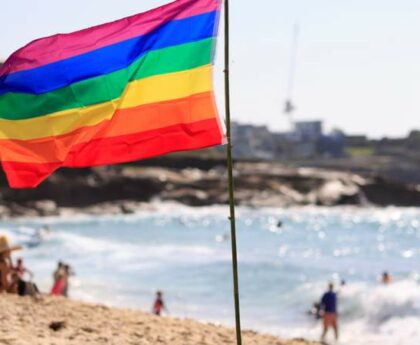