It appears not even our beloved Steve Irwin is safe from the so-called “sovereign citizen” movement that has been gaining traction with an increasing number of Australians.

Sovereign citizen is a term used to describe individuals who believe that they, not judges, juries, law enforcement, or elected officials, should decide which laws to obey and which to ignore.

Sovereign citizens also typically do not believe they should have to pay taxes and believe that maritime law should govern on land.

The movement has had a resurgence in Australia in the wake of the pandemic and the lockdowns and restrictions that came along with it, with anti-lockdown and sovereign citizen groups merging together.

It is not uncommon for members of these groups to hold radical views and believe in a number of conspiracy theories.

One of the more bizarre beliefs has been displayed in a video of two people hinting at some ominous theory behind Steve Irwin and Australia Zoo.

The video, which appears to have initially been live streamed to a Facebook page, was re-posted by Twitter user Ken Behren who posts a lot of content around Australian sovereign citizens.

The video shows two people kayaking out on Canberra’s Molonglo River in front of Government House.

HMAS Cooker 1 & HMAS Cooker 2 deployed this morning across Lake Burley Griffin, before Lt Dan casts doubt on the death of Steve Irwin of all people. So, Australia Zoo is in the shape of a “Q”. Where the F do these clowns get this stuff. Seriously! ðŸ¤”ðŸ¤” pic.twitter.com/zNtJeCdqIv

The man and woman filming, named by the Twitter page as Vicki and Corey, yell out to the kayakers that there are “Steve Irwins” on the other side of the river.

At first I thought it was military, but it might be a couple of Steve Irwin’s grounds keepers,’ Corey says behind the camera.

“Steve Irwin lookalikes. I don’t think Steve Irwin would show his face there.”

It is unclear exactly what he means when referring to ‘Steve Irwins’.

He continues: I am not going the … let’s just say may he rest in peace.”

“Absolutely,” the woman, Vicki replies, before Corey notes Irwin was the 17th person to “ever be killed by a stingray”.

It is at this point that things get even more bizarre, with the man adding: “And the shape of Australia Zoo is in a Q. Nothing to see here folks.”

It is possible this could be a reference to QAnon, which is a far-right conspiracy theory that promotes bizarre beliefs about who controls politics and the media. 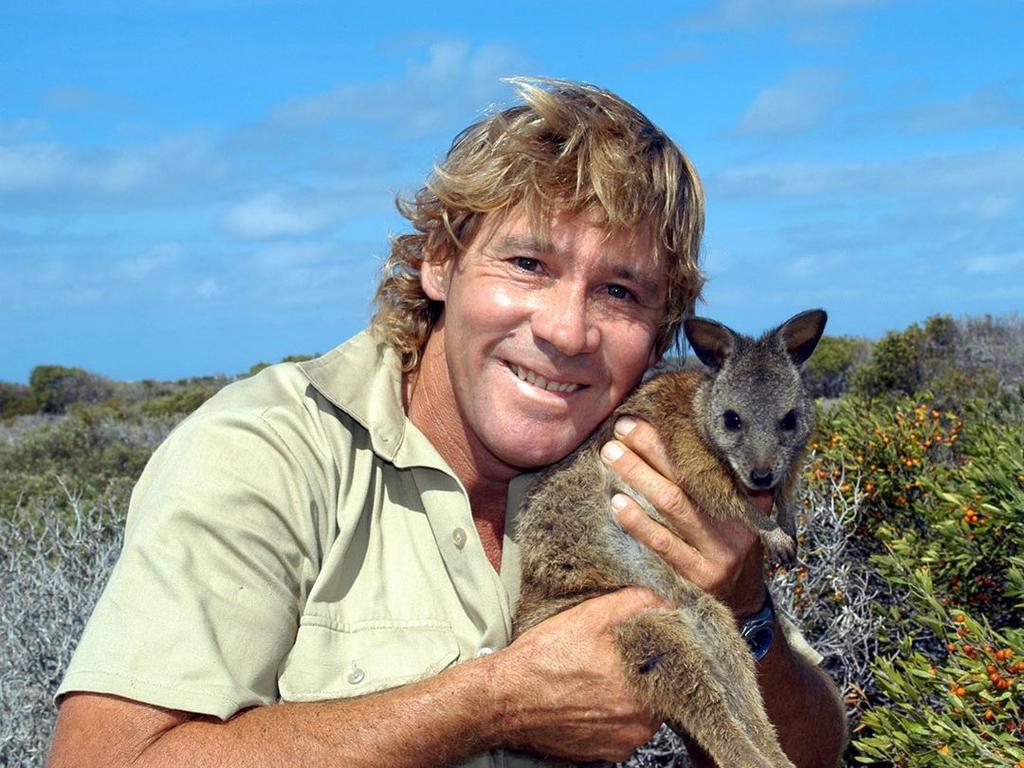 The sovereign citizens made bizarre references to Steve Irwin and Australia zoo.

Other videos posted to the Twitter page reveal that one of the men out on the kayaks, referred to only as Dan, has bail conditions placed upon him that means he cannot be within 200 metres of Government House.

Corey and Vicki appear to refer to these conditions in another video, where the pair comment photos were being taken of the kayaks from the other side of the river.

“They are taking photos. I guess they are worried about bail conditions. I don’t know,” Corey says. 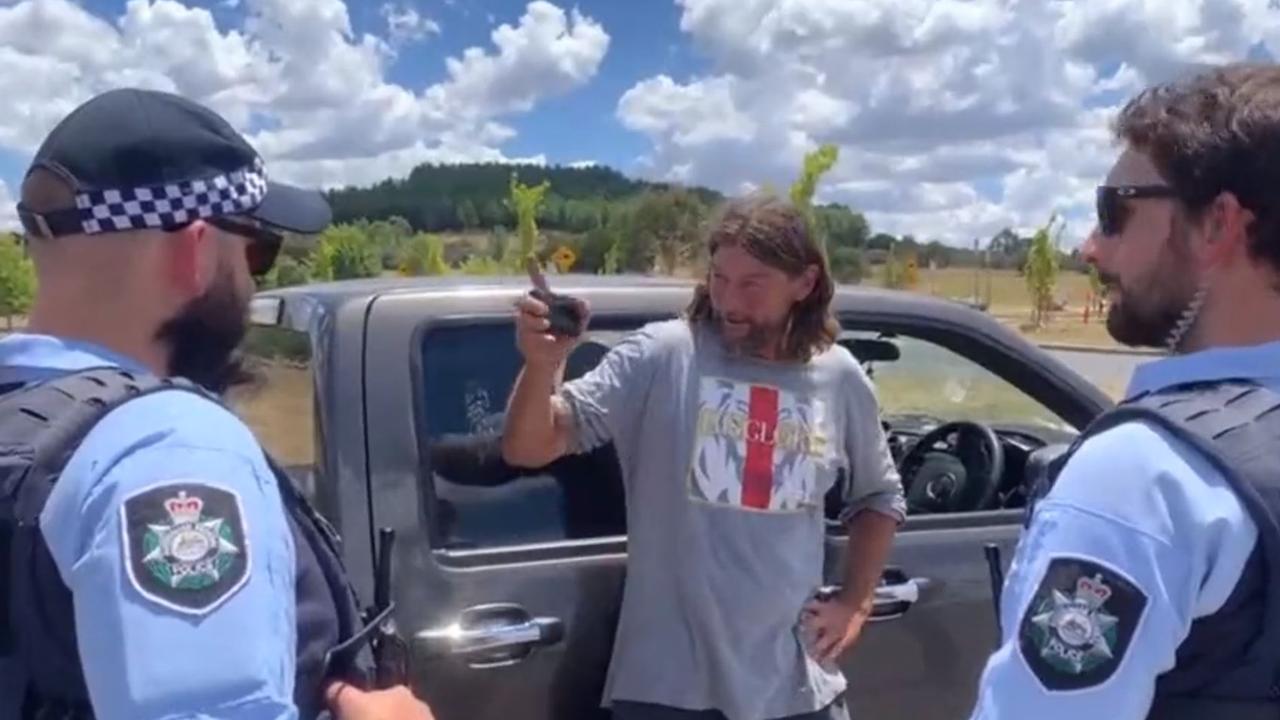 Another video showed Dan being confronted by police over breaching his bail conditions. Picture: @Ken_Behren/Twitter 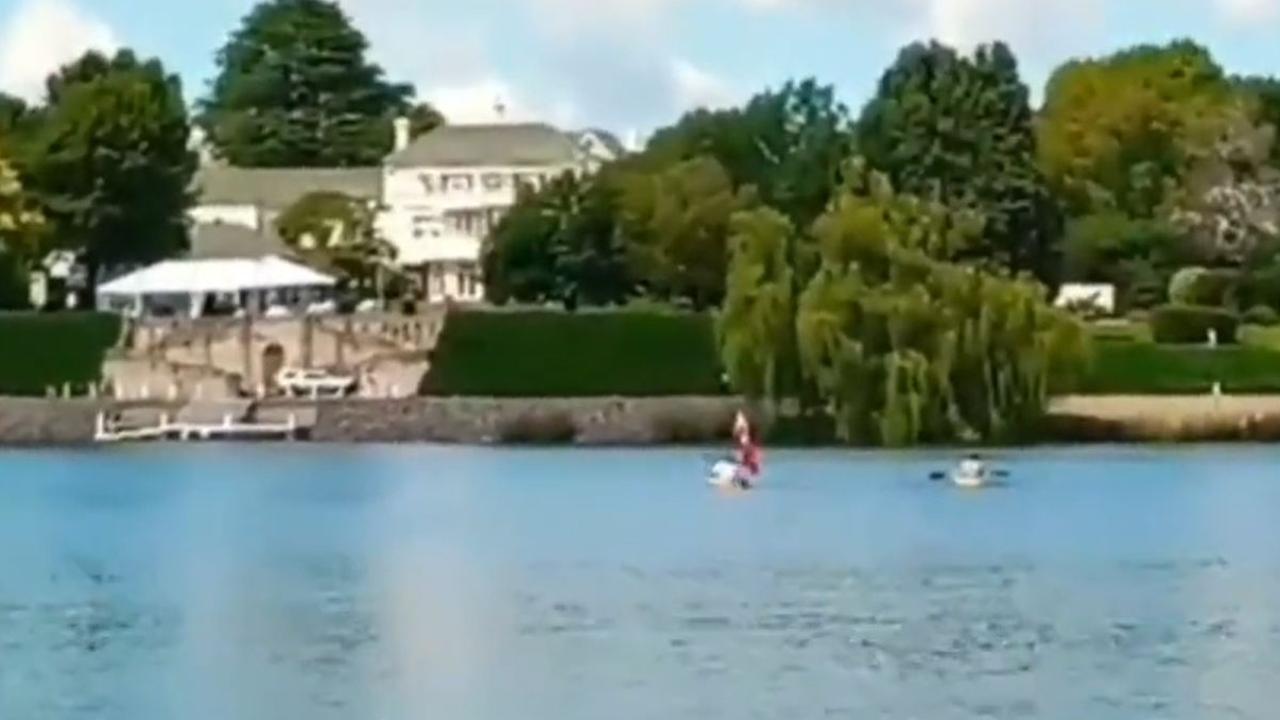 He claimed he did not come within 200 metres of Government House. Picture: @Ken_Behren/Twitter

Vicki points out there is a “thug” taking photos behind the willow tree in front of Government House.

After returning to land, Dan was met by two ACT Police officers and arrested for breaching his bail conditions.

Footage of that interaction was also posted online, showing Dan claiming he didn’t “touch any land” near Government House and just went out into the river to kayak and turned around.

“Are you aware your bail conditions is not to be within 200 meters of a Government House?” the police officer asks.

Dan then denies this, claiming his conditions only state he can’t be in the suburbs of Yarralumla and Parkes.

When the officer once again states the actual bail conditions are noted down in their system, Dan then claims he would have been “shy of the 200 metres” anyway, adding he even told his companion that he had to “hold back” and wasn’t “going over there”.

When asked how far he thinks he was from Government House, Dan says he was no closer than 100 metres from the jetty which sits in front of the house.

“From the jetty to there is another 100 metres to the house. I turned around and came back,” he said.

“Are you saying you were 100 metres from the jetty?” the second police officer asks.

Dan replies: “Right now I won’t say nothing else. I was well aware that I was not going to breach my bail conditions, which is why I turned around and came back.”

Lt Dan arrested a few hours ago. Appears to be on breach of bail conditions. Picked up on camera somewhere in the ACT where he is not permitted, but unclear where. pic.twitter.com/tpa4pGtQ22

Another video shows one of the police officers telling Dan that they were going to take him back to the police station as they believed he had breached his bail conditions.

“Shouldn’t you do your investigation and then come back and get me?” Dan responded.

“We formed a belief based on the footage that they’ve got,” the officer replied, possibly referring to the footage of Dan on the kayak.

“If you want, you can secure your vehicle.”

One of the men with Dan who was filming the interaction then pipes up, appearing to call anyone watching the video to “come to Canberra”.

“It is time to come to Canberra people, you see what is happening now. Get to Canberra, ASAP,” the man says, before asking the officer whether they were going to bring him back or if they had to go and get him.

“We will cross that bridge when we come to it,” the officer says

An ACT Policing spokesperson told news.com.au that officers attended Barrenjoey Drive, Canberra, at approximately 1pm on January 24 to speak with a 48-year-old man who was subject to bail conditions from previous charges.

One of the conditions was that he not be within 200 metres of Government House.

“The 48-year-old man was subsequently arrested for breaching this condition and lodged at the ACT Watch House,” the spokesperson said.

“He later faced the ACT Magistrates Court where he was again released on bail.”