The wild window smash arrest of a sovereign citizen in Coffs Harbour last week has taken a new bizarre turn after her friend issued a nonsensical reason for her behaviour.

Last Wednesday, police were filmed dragging a woman from her car after she repeatedly refused to acknowledge their authority.

The traffic stop occurred just off the Pacific Highway in Coffs Harbour on Wednesday when Helen Delaney refused to comply, before making the odd claim that she and her passenger Luke Simpson were not driving – but “travelling”.

After a lengthy argument, a police officer eventually breaks the car window before unlocking the door and pulling Ms Delaney from the vehicle, while copping a foul-mouthed spray from the passenger filming the ordeal.

But just one day later, Ms Simpson and Ms Delaney joined an Instagram live explaining their actions, with the clip shared on Twitter by an account dedicated to “observing, mocking and calling out conspiracy theorists for amusement and education”.

“If you want to understand the thinking of Sovereign Citizens it’s a good watch,” the caption reads. 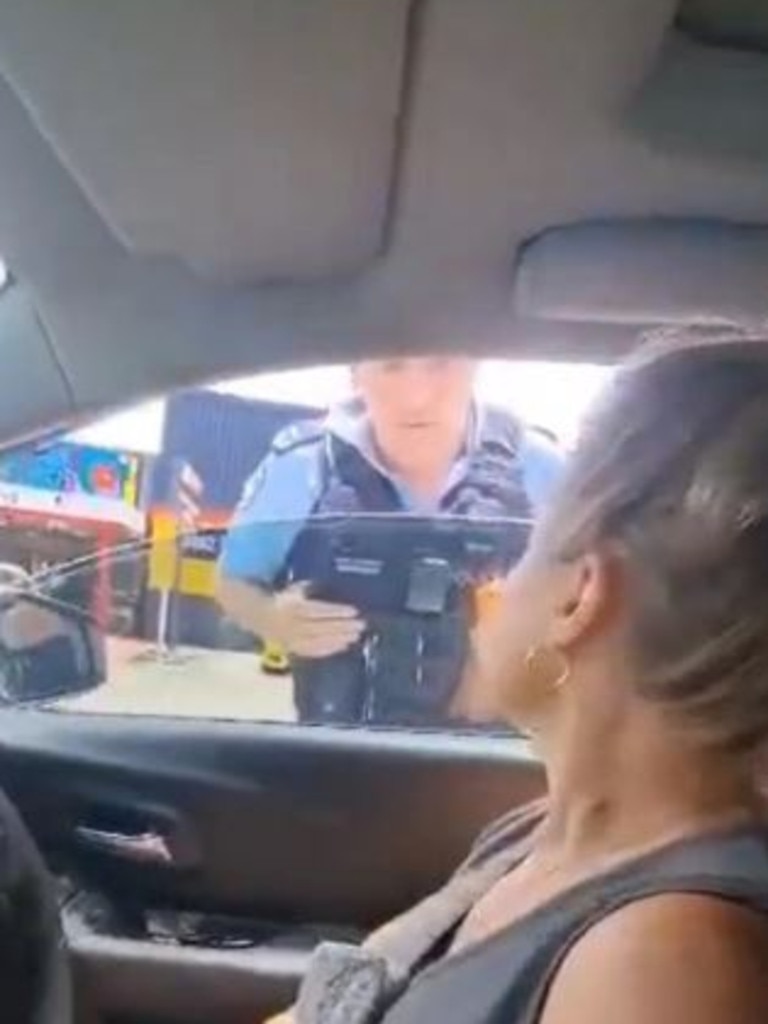 The stubborn woman has been pulled from her car during a traffic stop in Coffs Harbour after refusing to recognise police authority. Picture: Twitter 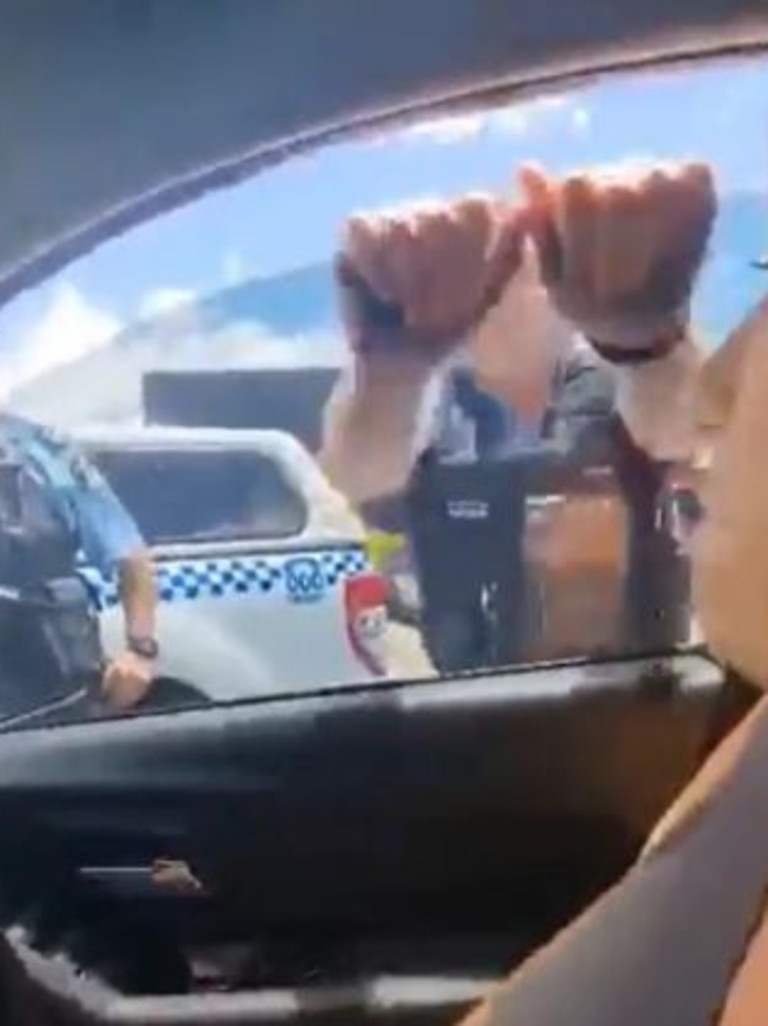 However, Mr Simpson instead goes a lengthy, rambling rant which is next to impossible to follow.

“ … Just to give the guys an idea of, um, how belligerent and how unlawful this, um, judicial system is. Um they continue to, no, in their eyes with what Helen has done in terms of, um, you know, reconveying herself and actually detaching, you know, cutting the umbilical cords from, ah, the system itself, so she is no longer, um, she is now foreign to the Australian corporation, right?” he says.

“Some of you guys on here might not actually understand what that means, but um, this operation on this continent is nothing but a co-operation.

“So I’ll reconvey and Helen has now detached herself from the strawmen, she has copyrighted her names and Helen is known now as Helen Mary, not as Helen Mary Delaney in capital letters right, and that’s I guess just a little bit of that.

“So in terms of Helen being a reconveyed national and actually registered to an original, an original, um, nation of terra australis … um she has signed, ah, has a live birth certificate, um, the crime, the incident that happened yesterday was what they had done was invoked international law, and anyone that was a participant in the abduction of Helen, um, was in violation of the Geneva Convention Article 31.”

I’ve Got News For You

For the record, Article 31 relates to “refugees unlawfully in the country of refuge”, and has nothing to do with citizens who don’t believe in drivers licences or the authority of the police.

It states that “The Contracting States shall not impose penalties, on account of their illegal entry or presence, on refugees who, coming directly from a territory where their life or freedom was threatened in the sense of article 1, enter or are present in their territory without authorisation, provided they present themselves without delay to the authorities and show good cause for their illegal entry or presence”.

“The Contracting States shall not apply to the movements of such refugees restrictions other than those which are necessary and such restrictions shall only be applied until their status in the country is regularised or they obtain admission into another country. The Contracting States shall allow such refugees a reasonable period and all the necessary facilities to obtain admission into another country,” it concludes.

Twitter users were quick to make fun of the explanation, with one posting: “I don’t understand any of his ramblings”, while another said: “These peanut ‘travellers’ are just attention seeking children who were never told ‘No’.”

“They’ve detached themselves but still use electricity, internet, water, roads, probably access healthcare, go to shops, use money, maybe even accept Centrelink, use a Medicare card, so not really detached from anything …,” another said. 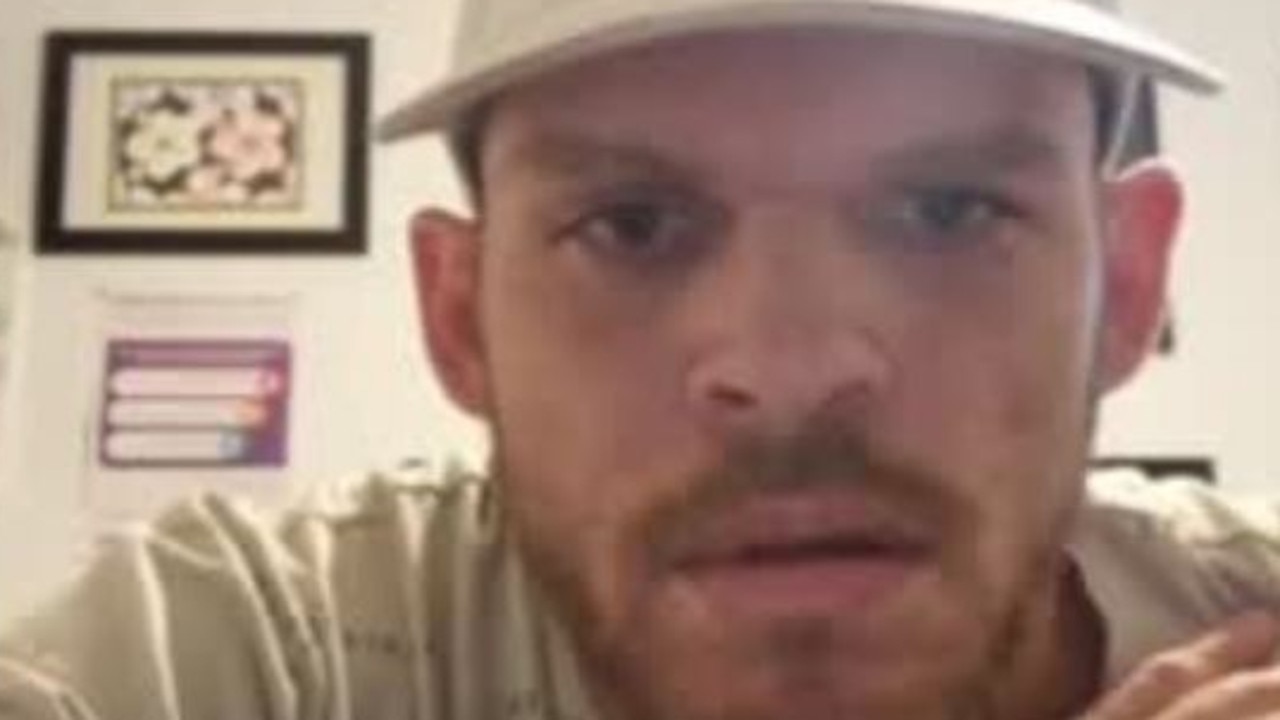 “I’ve just watched the full video. Yes, these people are cooked, and they have romanticised every aspect of their ‘fight’ and life. They believe they are special, being watched because they are special. All cults use this ‘exceptional’ rule to gain members. So sad,” yet another added.

In one, the duo have been pulled over by police, with Mr Simpson declaring that “You guys don’t have any authority. I don’t require your permission or to get your approval”.

In a second example, he is arrested after refusing to give a police officer his address.

“At this stage, I’m not satisfied that I’m going to be able to ensure your appearance before court, so we will be arresting you for driving whilst suspended,” an offer announces.

In a third clip, Mr Simpson and a group of others are protesting before a group of officers, with Mr Simpson repeatedly taunting them in a foul-mouthed rant.

“Oi big fella, sir, why don’t we go down here and we sort this issue out me and you. Take off your badge, your gun, and let’s have a crack.