An image of an Alice Springs Woolworths under siege after a machete attack has cast a sad light on the town described as a “war zone”, as senior politicians arrive in an attempt to quell the violence.

Woolworths in Alice Springs was forced into lockdown earlier this month when a 13-year-old boy reportedly attempted to enter the store waving a machete.

An image of the incident, which was shared to the Action for Alice 2020 Facebook page, showed the store with its roller doors shuttered as shoppers were directed towards a smaller side entry.

“A town held hostage. Woolworths fully operational but with doors closed. People shopping are exiting via the entry,” the image caption read.

“There is no place for violence anywhere in our community,” a Woolworths spokesperson said in response to the incident, thanking staff and police for their “swift response”.

Do you know more? Get in touch – [email protected]

The Woolworths was locked down after a young boy reportedly entered wielding a machete. Picture: Facebook / Action for Alice

A town that doesn’t open after dark

The Alice Springs Woolworths will no longer operate after nightfall in the interest of customer safety, shortening its opening hours from Monday to close at 7pm.

“The safety and wellbeing of our team and customers is of the utmost importance to us, and we believe that this change in trading hours will help to reduce the likelihood of incidents occurring,” a spokesperson for the store confirmed to news.com.au.

The store will begin closing at 7pm, a change which will remain in place “until further notice”.

BWS, too, will join the night-time lockdown, reducing its trading hours to 2pm-7pm Monday to Saturday “in response to the current situation in Alice Springs”, a spokesperson said.

The liquor retailer has removed all spirits over 750ml from the shelves, and has limited customer purchases to one per day.

Customers are limited to buying no more than two cartons of full strength beer, one bottle of 750ml spirits and six bottles of wine, the spokesperson said. 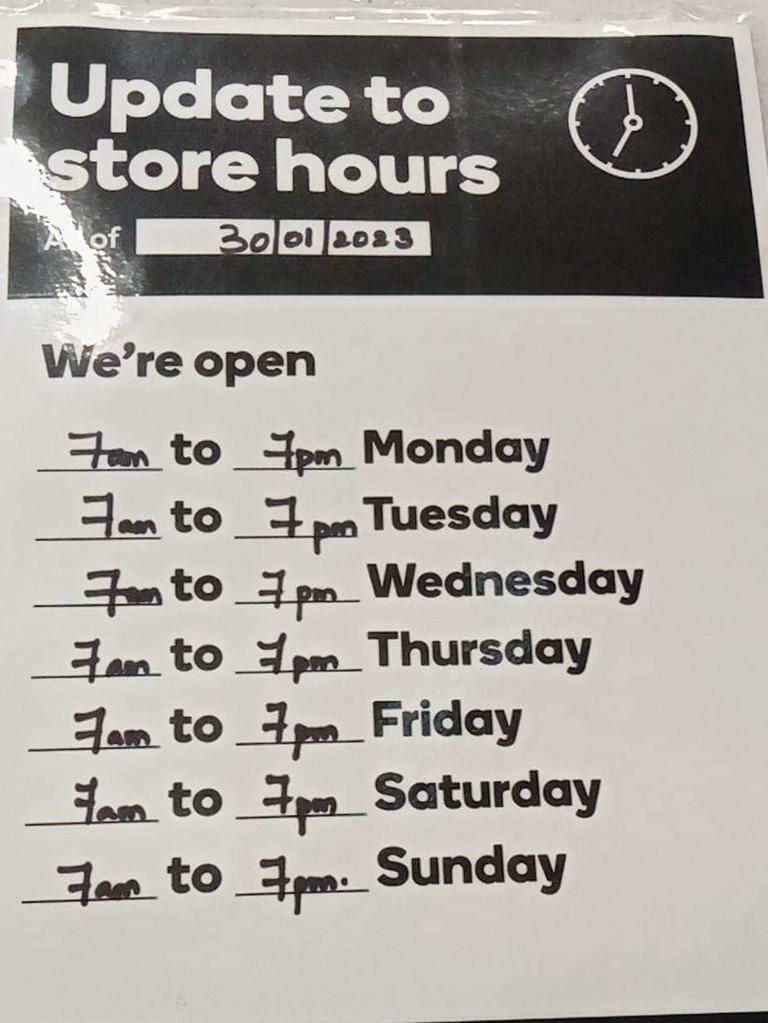 Woolworths will no longer open after 7pm to protect customer and staff safety. Picture: Facebook / Action for Alice 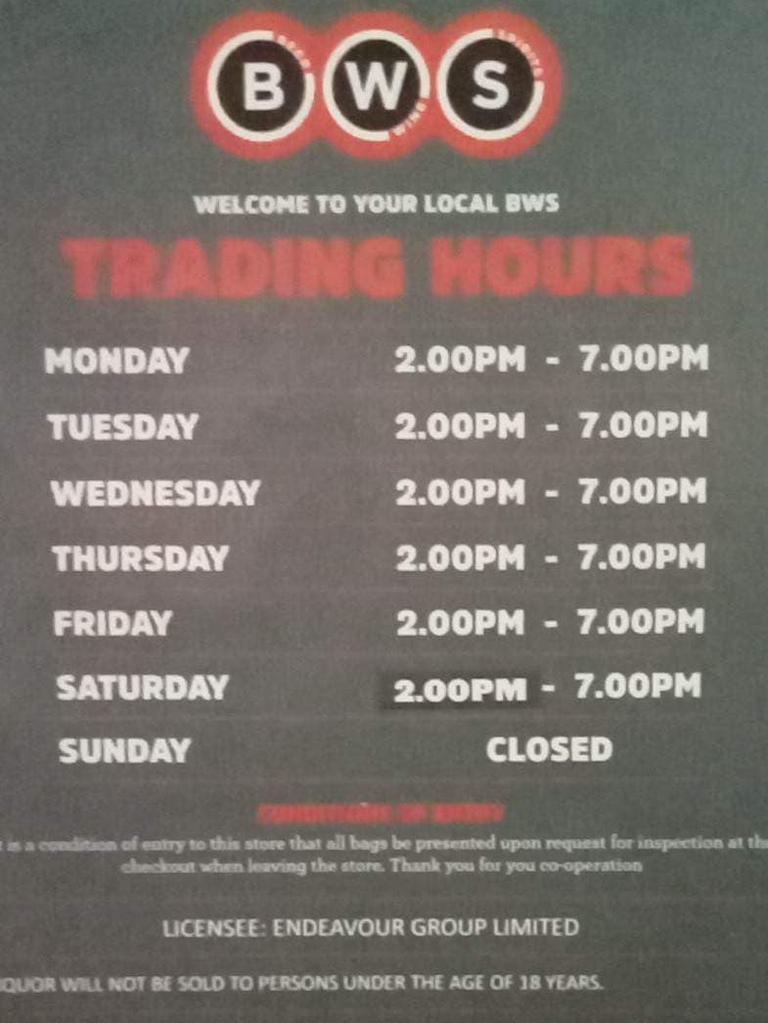 Inside the supermarket, chemicals that can be used as makeshift drugs including deodorant, mouthwash and hand sanitiser are stored in locked boxes, out of the reach of young community members, said Darren Clark, who runs the Action for Alice Facebook page.

The NT government has faced increased pressure to reinstate an alcohol ban in the town to help quell violence – but Mr Clark told news.com.au he didn’t believe it would make a difference.

“Taking the alcohol away is not going to give these kids a safe home. They’ll just find something else. Most of them can’t legally buy alcohol anyway. They’re mixing hand sanitiser with orange juice or lemonade to get high.” 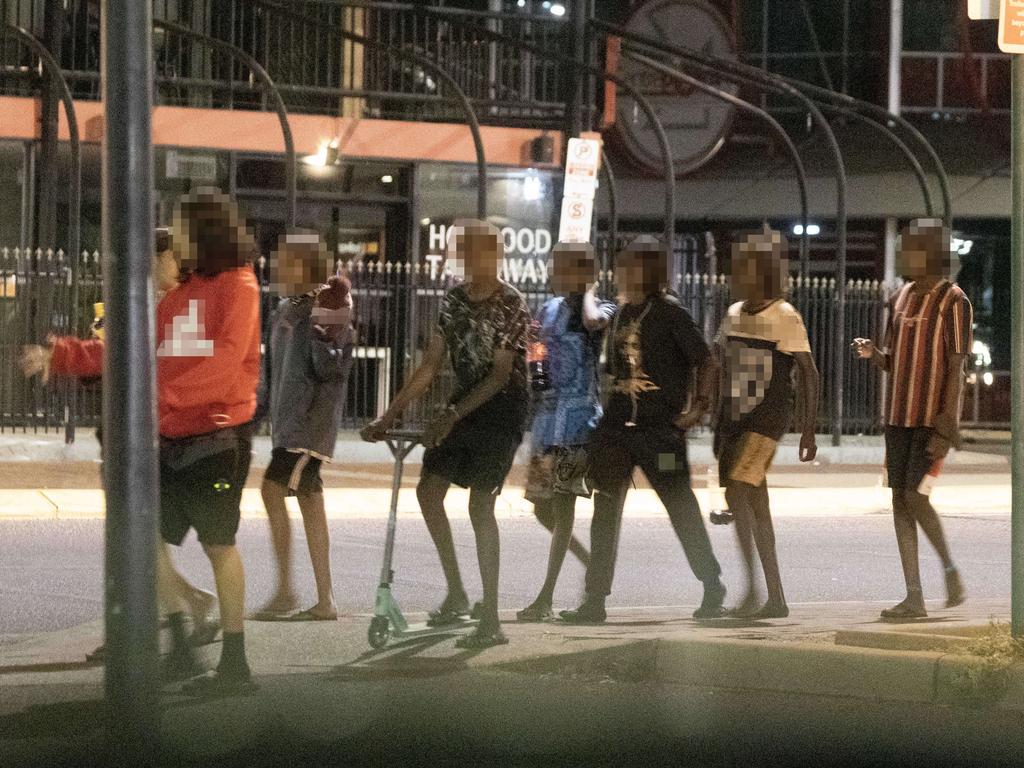 Supermarkets have locked up deodorant and other makeshift drugs, as Mr Clark says an alcohol ban “won’t give kids a safe home”. Picture: Liam Mendes / The Australian

Mr Clark, who has lived in Alice Springs for 25 years, said fear was mounting and giving way to anger.

“People are starting to get angry over the lack of action, the lack of protection for the community,” he said.

“These children from a young age are witness to violence that we cannot comprehend. The violence they now partake in, to us, is extreme. To them, it’s all they know.”

Some 300 people have been arrested in Alice Springs in the past seven weeks alone, while another 400 were issued infringement notices.

Overnight on Tuesday four young men — one armed with an edged weapon — broke into the home of a 70-year-old woman, before allegedly assaulting her and stealing a mobile phone.

Detective Acting Senior Sergeant Adam Donaldson called it a “cowardly attack on a vulnerable member of our community,” as he urged witnesses to come forward. 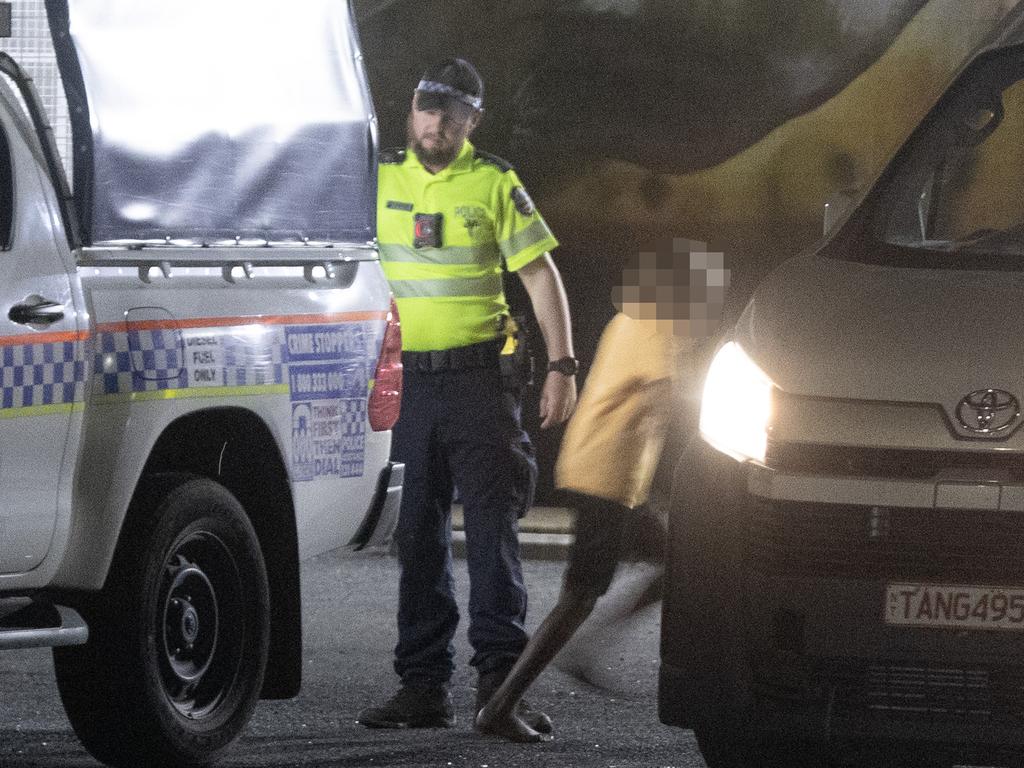 Mr Clark called for a greater police presence in the short-term, before the children are helped more comprehensively. Picture: Liam Mendes / The Australian

Prime Minister arrives in a bid to restore law and order

Anthony Albanese is touching down in Alice Springs on Tuesday in response to fervent calls for action.

Indigenous Senator Jacinta Nampijinpa Price called for the Prime Minister to visit the town, which she said had been “described as a war zone”.

“He’s made several overseas trips to visit countries in need of support but Alice Springs has been described as a war zone, and it has been so for some time now,” Senator Price said on Monday.

“Our police are under the pump, they can’t seem to get the problem under control. We do need some sort of federal support, whether that’s now (bringing in) the AFP.”

Mr Clark, too, called for greater police presence to tackle the imminent crime problem – but said more resources were needed to “give these kids a future”.

Police needed to be redirected into the suburbs, where crime was settling after a crackdown in the CBD, he said.

“We need a huge task force here to give us a small circuit breaker, but then what we need is to take these children off the streets,” Mr Clark said.

“There needs to be the infrastructure to create a real economy in remote communities, so these kids can believe they’ll live a life with a purpose.”

Do you know more? Get in touch – [email protected]