A single email sent to a hopeful prospective tenant has summed up the reality of Australia’s rental crisis, as soaring demand allows agents and landlords to jack up prices.

The email, which was shared on the AusFinance Reddit page on Wednesday, instantly dashed the hopes of renters attempting to get into the tight market for a reasonable price.

“We have experienced an overwhelming demand for this property and have 100 groups booked for the inspection tomorrow at 12pm with many more requesting to attend,” the email, which was sent by Vine Property Agents, read.

“The volume of interest indicates we may have priced the property incorrectly. We therefore have to cancel the inspection tomorrow.”

Has the rental crisis impacted you? Get in touch – [email protected] 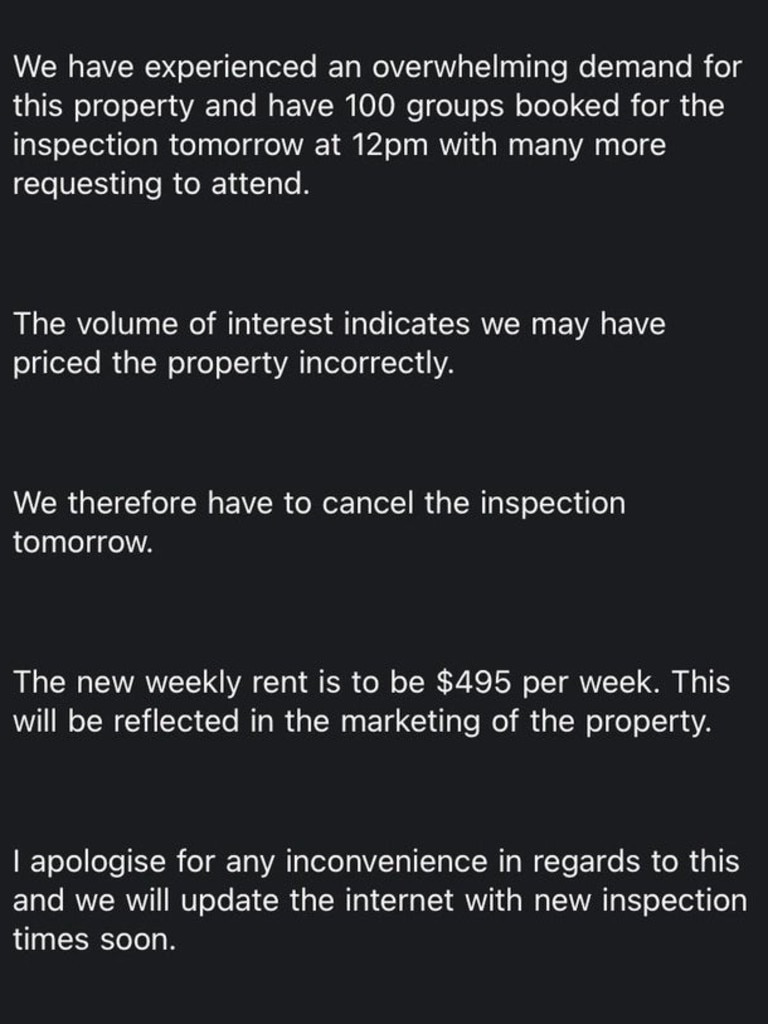 The email, sent by Vine Property Agents, said the property had seen “overwhelming demand”, before announcing its advertised rent would be hiked. Picture: Reddit.

“This will be reflected in the marketing of the property. I apologise for any inconvenience in regards to this and we will update the internet with new inspection times soon,” it said.

News.com.au can reveal the property in question was a three-bedroom, two-bathroom apartment in Moorooka, Brisbane, previously advertised for $470. The unit is just 69 square metres. Its inspection times have not yet been updated. 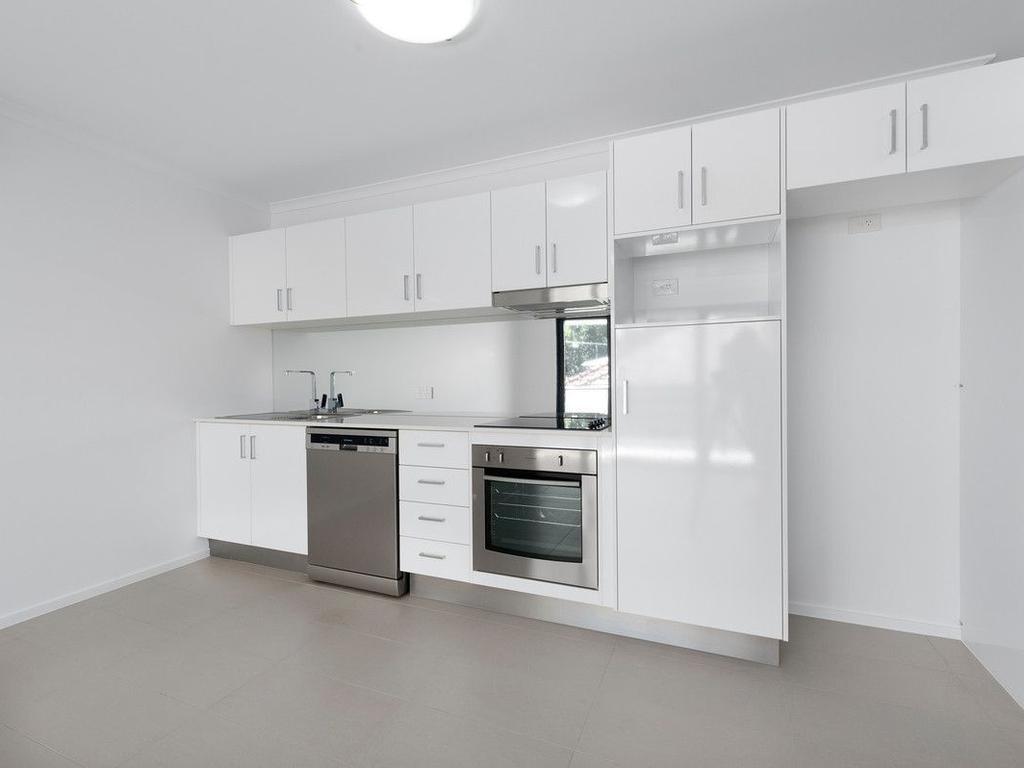 The property that was subject to the hike. Picture: Domain. 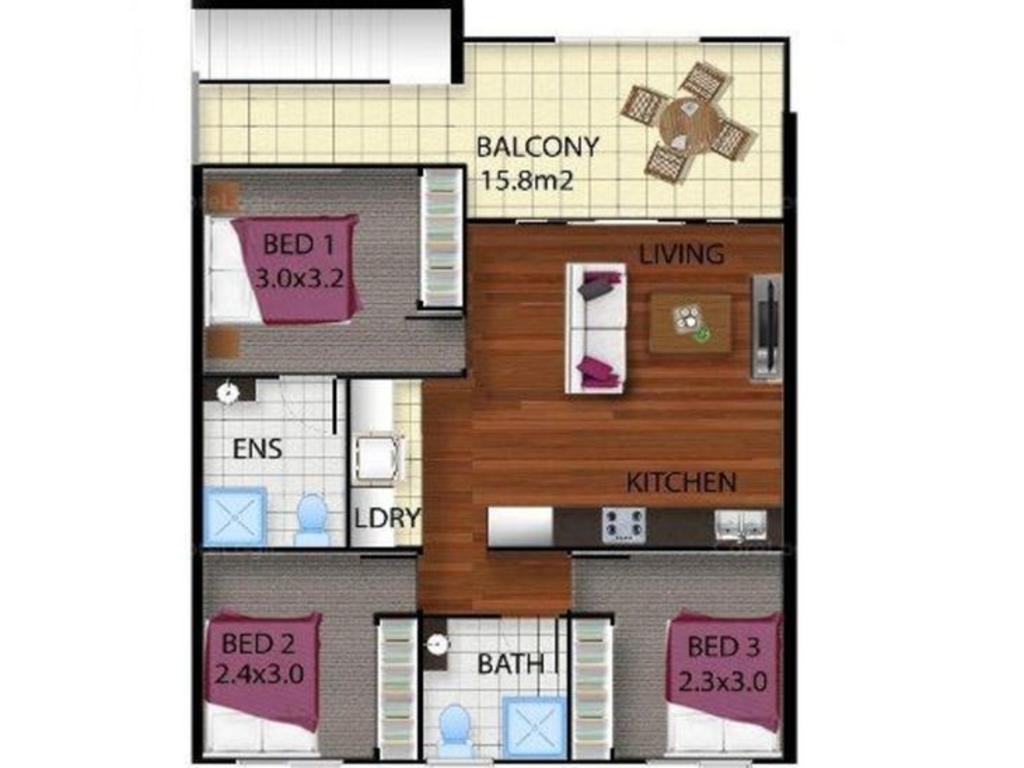 A floorplan of the property that was subject to the hike. Picture: Domain.

One other three-bed, two-bath apartment was available in Brisbane for $495 – a converted Queenslander eight kilometres from the CBD, which backs onto both a major road and a railway track.

Users were quick to commiserate with the hopeful tenant.

“Another 100+ people will rock up the next week more than happy to pay that price. It’s insane right now,” one said.

Others were sympathetic to the agent, saying: “S**t but not as s**t as coming to the inspection, waiting for an hour and discovering it rented to someone else for $100/ week more than advertised.”

“Only a matter of time before (real estate agents) just start auctioning the rental contract,” another said.

Others were sympathetic with the agent, saying: “Wow, I actually respect this message from the real estate but feel for all the people trying to rent a property right now.” A second three-bed, two-bath apartment available for $495 in Brisbane – a converted Queenslander backing onto a railway line. Picture: Supplied.

Brisbane has experienced soaring rents in recent years. In October, a Brisbane real estate agency urged landlords to hike rents by more than 20 per cent before the end of the year – more than double the rate of inflation.

The email, sent by Ray White West End, claimed “many landlords are not being provided with the information to make an informed decision” as it recommended the increase.

Many tenants would be “agreeable”, they asserted, advising landlords the hike could mean an extra $10,000 in their pockets each year.

In Sydney, tenants queued for a one-bedroom unit in Manly. Picture: Reddit.

The average rent in Brisbane increased by 13.3 per cent in the 12 months to September 2022, soaring to $530 per week. Vacancy rates, meanwhile, plummeted to just one per cent.

Tenants are caught in the middle, squeezed by both soaring prices and short supply.

The scheme gave property owners a subsidy of nearly $11,000 each year for 10 years if they rented out newly built dwellings at 20 per cent less than the market rate. 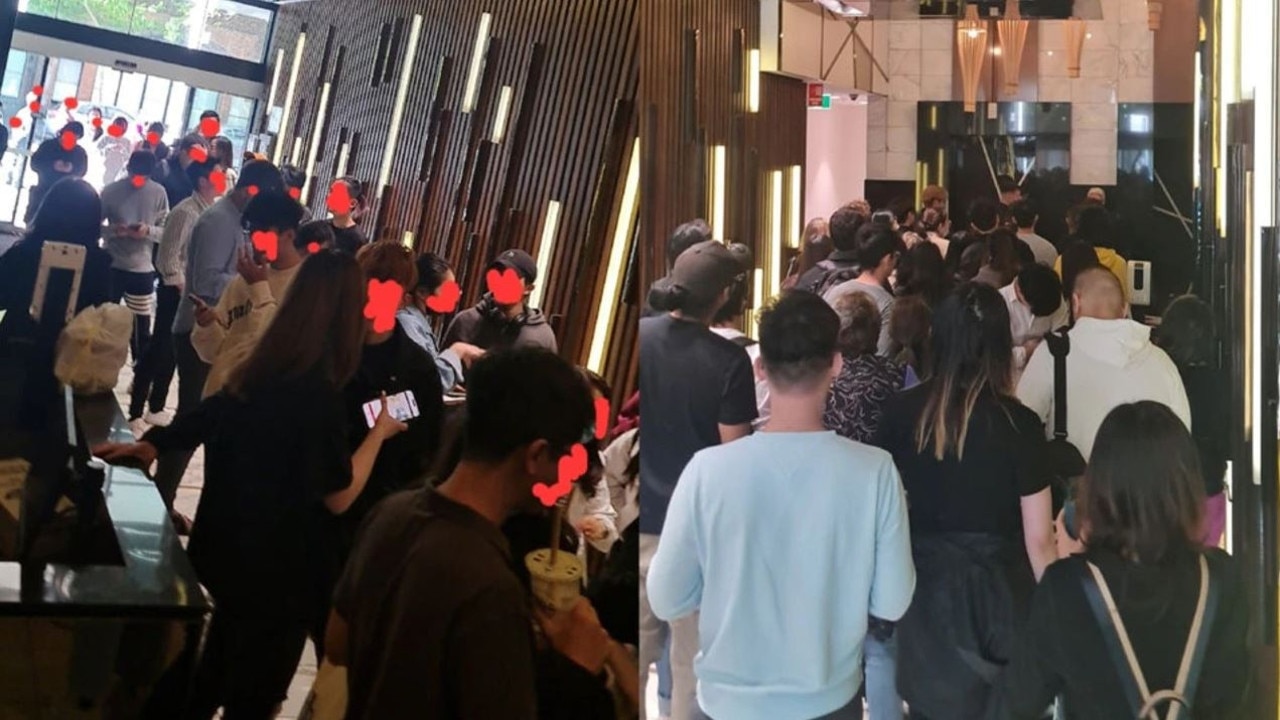 And in Haymarket, a huge crowd gathered to view a tiny apartment. Picture: Reddit.

In Sydney, too, dozens of prospective tenants queued down a building hallway to view a one-bedroom unit in central Manly.

Last month, a photo posted to the AusFinance Reddit page showed dozens of people lining up in a building lobby to inspect a “tiny, tiny” one-bedroom, inner-city apartment advertised at $525 per week.

“Why would you even bother joining a queue that long?” one asked.

“I’ve been to worse nightclubs,” another joked.

“Renters are second-class citizens in this country. Good luck,” a third said.

Has the rental crisis impacted you? Get in touch – [email protected]