Australians have been issued a warning as an increasing number of children are being targeted by a sickening, sexually-charged text message scam.

Reports of sexual extortion cases involving Aussie teens are on the rise, with authorities exposing the horrific impact of this vile criminal behaviour.

Sexual extortion, often referred to as sextortion, is a form of online blackmail where the victim is tricked into sending sexual or compromising images of themselves to the scammer.

The scammer then issues a series of demands to the victim, often involving sending large sums of money, threatening to share the images unless they comply.

Teenagers have become major targets of sextortion, with boys being the predominant targets, though a child of any gender can be targeted. 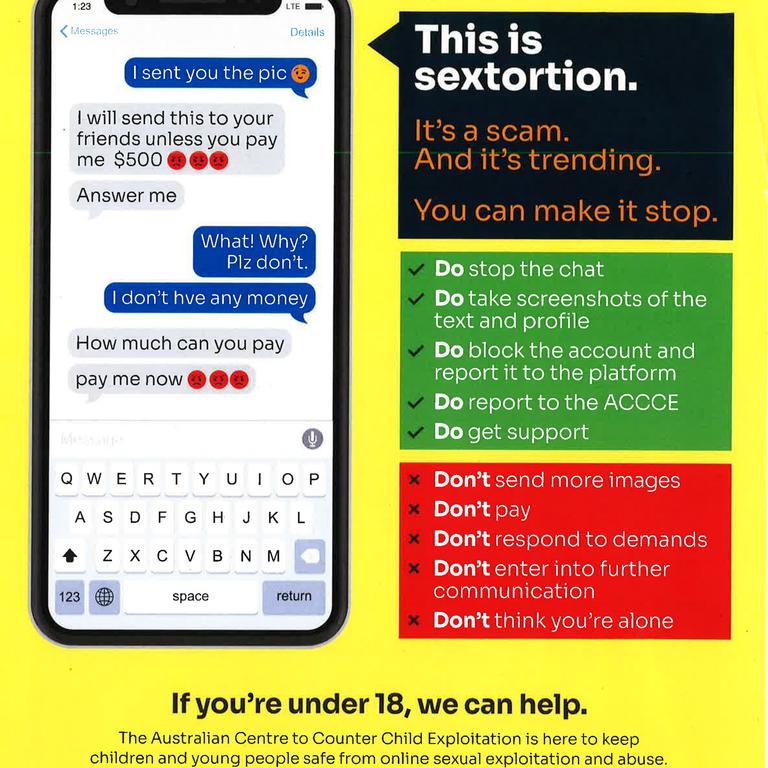 NSW police have seen a surge in cases of ‘sextortion’’ by organised crime syndicates. Picture: ACCCE

The scammers use a fake profile, usually posing as a teenage girl, and reach out to potential victims via direct message on social media.

Once a victim has engaged in conversation, the scammer usually asks them to continue talking on a different app.

This is often when the conversation becomes highly sexualised and the victim is coerced into sending through sexual images.

Once the offender has received these images they will then use it to blackmail the victim, threatening to share it with their friends and family unless they pay.

There have been cases where offenders have photoshopped images to make the victim appear to be in an even more compromising position.

After the victim pays the initial sum, the offender will continue to blackmail them for as much money as possible before moving onto the next victim.

These scams can be so distressing to victims that it can lead to self harm or even suicide.

NSW Sex Crimes Squad commander Jayne Doherty told The Daily Telegraph that these offenders prey on the fear from teenage victims that they will get in trouble, with many choosing to pay the blackmailer instead of going straight to the police.

“Once you pay the money, we find they will keep coming at you for more. Go to your local police station and report it because you are not in trouble,” she said.

Anyone who believes they have been targeted by a sextortion scam should immediately stop the chat, take screenshots of the texts and social media profile, block the account and report it to the ACCCE. 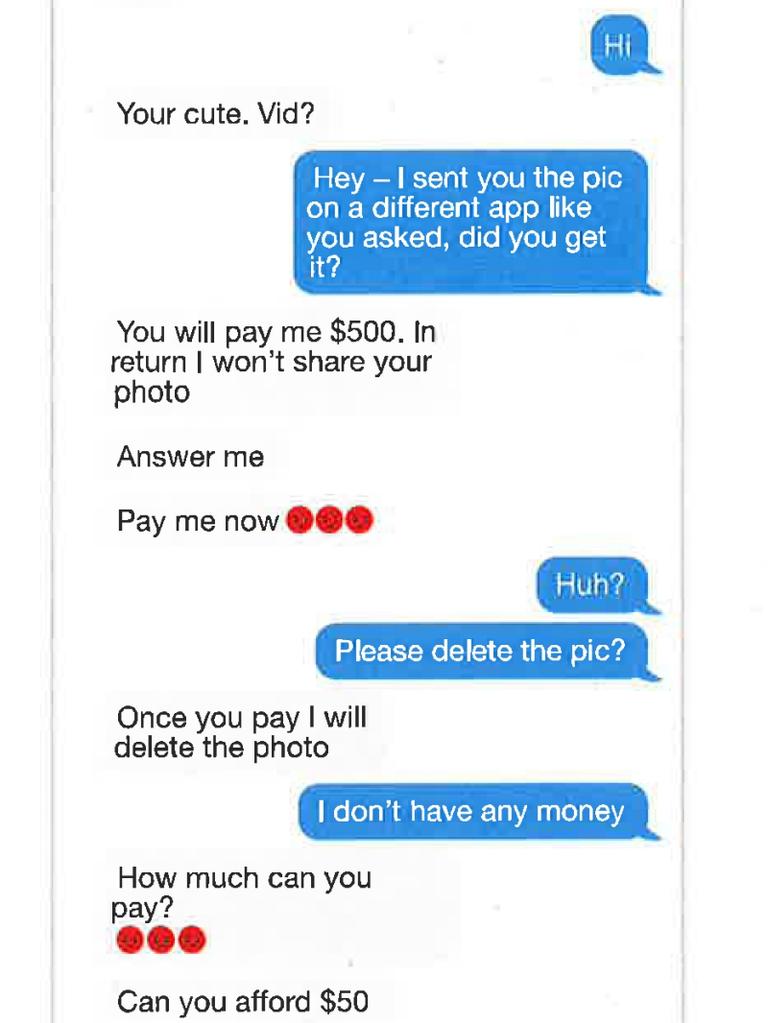 This is another example of the types of messages offenders are sending Aussie teenagers. 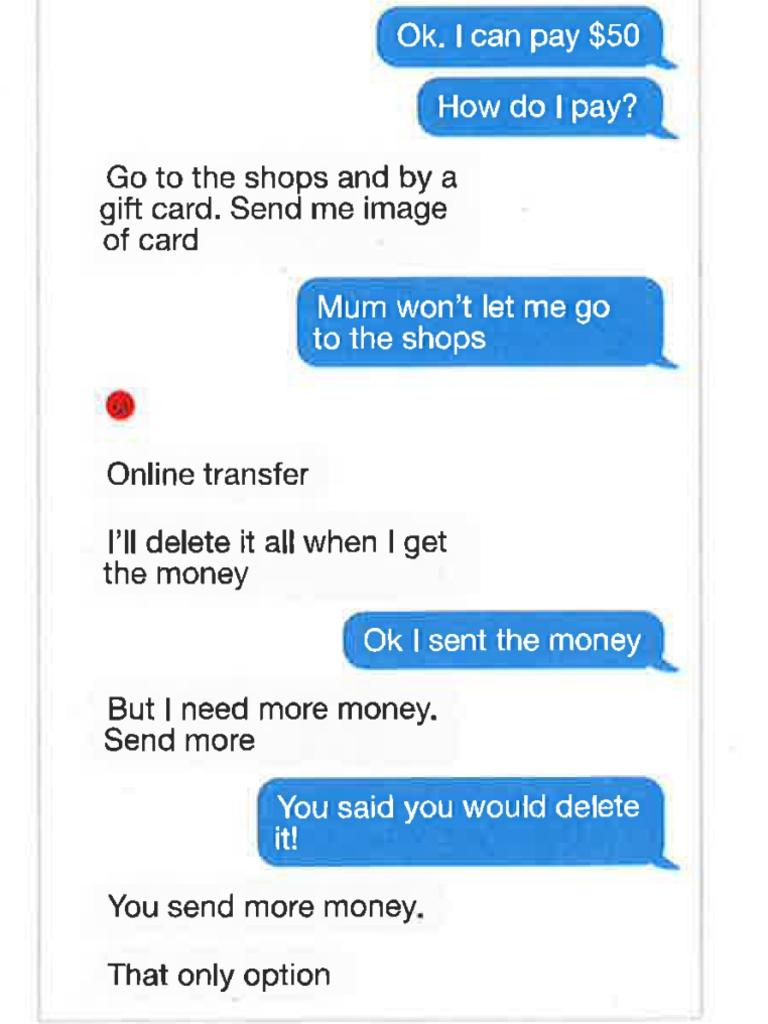 These types of scams can have significant impacts on victim.

Overseas criminal groups behind the spike

In December last year, the AFP revealed that more than 500 Australian bank, financial services and digital currency accounts linked to sextortion syndicates targeting Aussie teens had been shut down.

Operation Huntsman, run by the AFP and Australian Transaction Reports and Analysis Centre (AUSTRAC), resulted in the closure of the bank accounts linked to international crime syndicates.

The operation, which was launched in June 2022, targeted the bank accounts that were sending the money scammed out of distressed sextortion victims into offshore accounts.

Similar action is pending against hundreds of other people as investigators continue to work with the financial sector to obtain the details of more than 1000 Australian bank and financial services accounts that are facilitating the flow of money out of the country.

AFP Commander Hilda Sirec said data showed more than 90 per cent of victims were male and predominantly 15-17 years of age, however police had seen victims as young as 10 years old.

“We are experiencing a global trend of offshore crime syndicates targeting teenagers, predominantly young men and boys, being coercing into sending sexually explicit content and then blackmailing them,” she said.

“The financial action that we have undertaken with Operation Huntsman so far is just the beginning; we will target and disrupt these offenders operating offshore, wherever they hide.

“The AFP’s partnership with AUSTRAC and our relationship with international law enforcement partners all over the world means these networks are not safe from our reach.”

Sexual gratification has traditionally been the main driver for criminals behind sextortion crimes, however, the offshore criminal syndicates driving the worrying new surge being seen by police are seeking to profit financially from the victims as well.

AUSTRAC National Manager, Law Enforcement & Industry, Jon Brewer, said these criminal groups are being primarily driven by the financial gains they can achieve by exploiting vulnerable members of the community, such as young Australians.

“The tradecraft and agility of our analysts enable AUSTRAC to follow the money as it crosses borders and financial and digital ecosystems.”

“AUSTRAC is also leveraging our close partnership with industry to increase the capability of industry partners to recognise suspicious transactions indicative of sexual exploitation, and to report this to AUSTRAC,” he said.