Scott Morrison has sparked fresh speculation he plans to quit Parliament after imploring voters to understand he “did his best” – and offering thanks to his wife Jenny and their two daughters in a speech during the historic censure motion against him.

The historic censure motion over his secret ministries passed 86-50 with Tasmanian Liberal MP Bridget Archer and the independents voting with Labor.

But the former prime minister’s words prompted chatter that it sounded more like a valedictory than a simply a defence of his conduct.

“It is an honour to serve this house and I‘ve done that for the past 15 years,’’ Mr Morrison said. “And I‘m grateful to the people of Cook for their strong support during this time.

“I thank them for their encouragement, the many messages of support as I and my family have returned to our dear home in the Shire.

“I also thank my local Liberal Party members for their constancy and my local church committee and the Horizon church.

“And people of faith from all around the country. I‘ve been humbled by your messages, support and encouragement.”

Mr Morrison then went on to thank his wife, children, church and “loyal” former staff.

“I also thank again my colleagues here in this place and for me for their support it has been an honour to serve alongside especially in fact, my wife, Jenny, and our daughters and in our family and friends for their love and support, as well as my former staff because they must always be proud of what you‘ve accomplished during that time,’’ he said.

“I conclude by thanking the Australian people for the privilege of being able to serve my country in so many roles, but especially as Prime Minister.

“I gave it everything I had. I did it to the best of my ability and in the best of faith each and every day.” 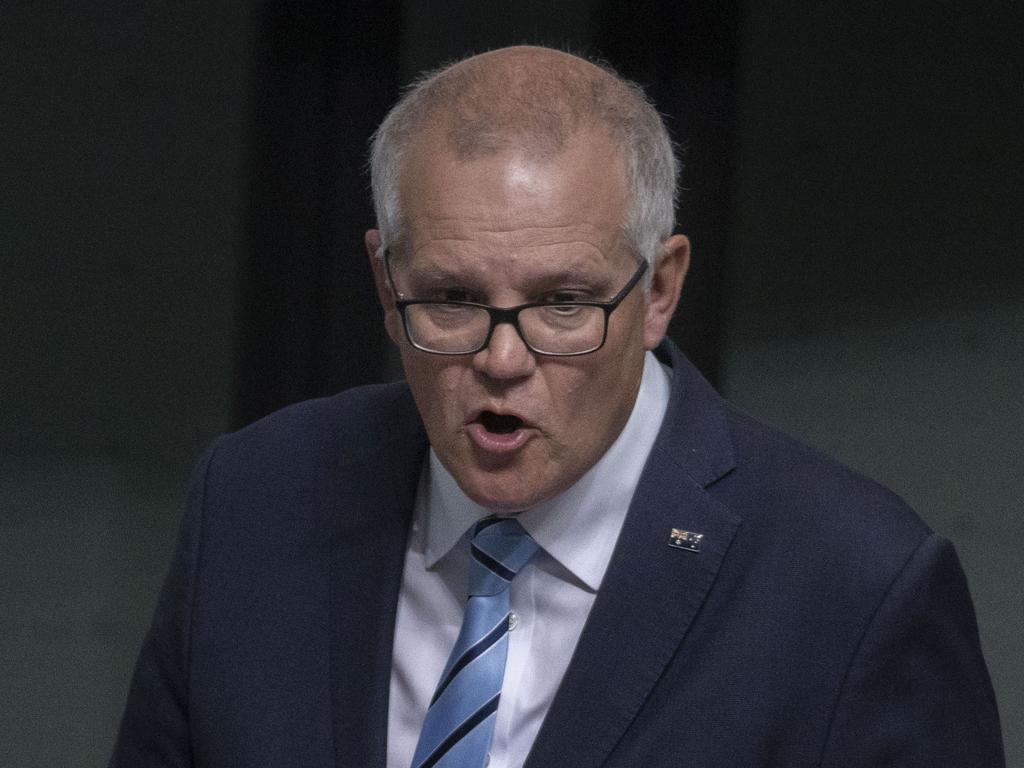 Scott Morrison has sparked fresh speculation he plans to quit Parliament after imploring voters to understand he ‘did his best’.

After listening to Mr Morrison’s speech, as a show of support the Coalition MPs staged a mass walkout while other MPs spoke on the motion.

But while multiple MPs hugged and supported Mr Morrison, his successor Peter Dutton did not – despite opposing the motion.

He didnâ€™t even trust his colleagues to tell them while leading them to electoral ruin.
Now the sad sods that remain are lining up to shake his hand pic.twitter.com/UAJSawBUmU

Tasmanian MP Bridget Archer remained in her chair, as she prepared to cross the floor as the lone Liberal MP to vote with Labor on the censure motion.

The Victorian MP Keith Wolahan (Menzies) also remained in the chamber but told news.com.au he was not planning to vote for the censure motion. 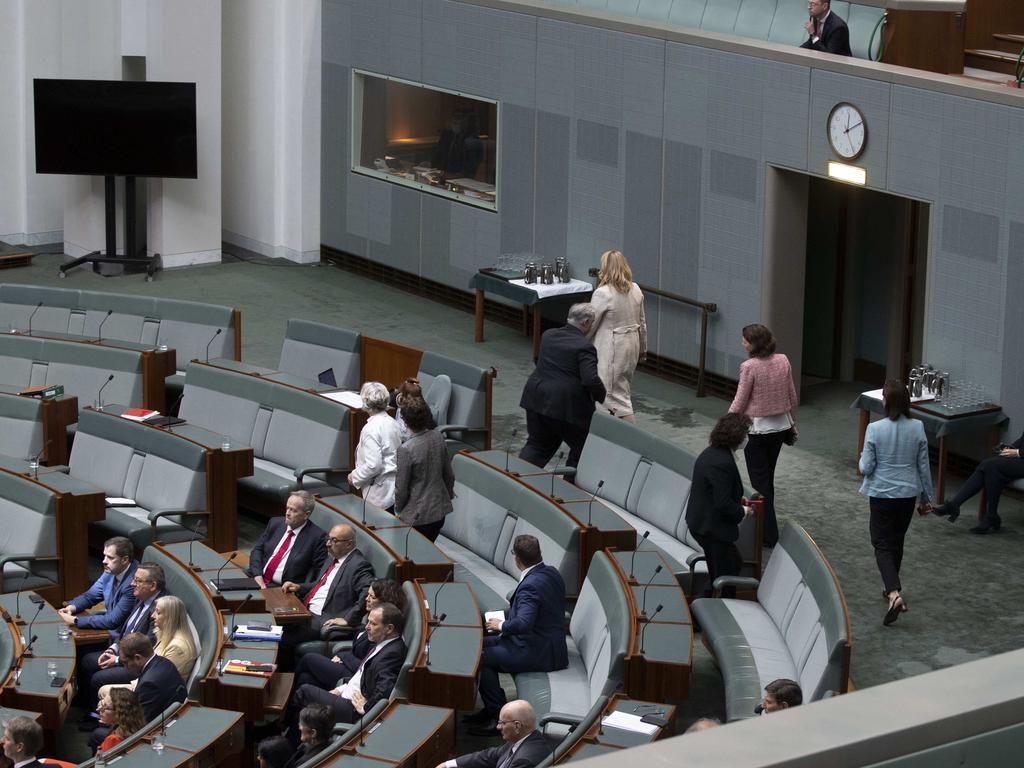 After listening to Mr Morrison’s speech, as a show of support the Coalition MPs staged a mass walkout while other MPs spoke on the motion.

One of the former ministers that Mr Morrison deceived abstained from the vote in protest describing it as “a political stunt” by Labor.

This was an option that was open to the Liberal Party rather than stand and vote in favour of Mr Morrison’s actions but it ultimately chose another path.

Queensland MP and Liberal frontbencher Karen Andrews told news.com.au she was not about to participate in a Labor “stunt”.

“I expected Labor to milk this and that is exactly what they did – this was never about fixing the problem, but a political stunt,’’ she said.

“The government has had ample time to introduce remedies in accordance with the Bell recommendations.”

Ms Andrews has previously called on Mr Morrison to resign from Parliament in August.

“I had absolutely no knowledge and was not told by the prime minister. This undermines the integrity of government,” Ms Andrews said at the time.

“I think that Scott Morrison needs to resign and he needs to leave parliament.”

During his speech, Mr Morrison defended his government’s record during the pandemic.

However, he did not address what the pandemic had to do with secretly appointing himself to the resources portfolio to stop a gas project.

The Bell report found that the first two secret appointments – health and finance “were unnecessary, and a further three appointments had nothing to do with the pandemic at all.

“No nation, no leader had a perfect record,” Mr Morrison said.

“I now concede with the benefit of hindsight these decisions were unnecessary,” he said.

Bizarrely, he claimed the decision not to tell former finance minister Mathias Cormann was an oversight, insisting he believed his office had told him.

On the day he secretly appointed himself, he spent hours in meetings with Mr Cormann.

“None of us can claim to be infallible,” he said. 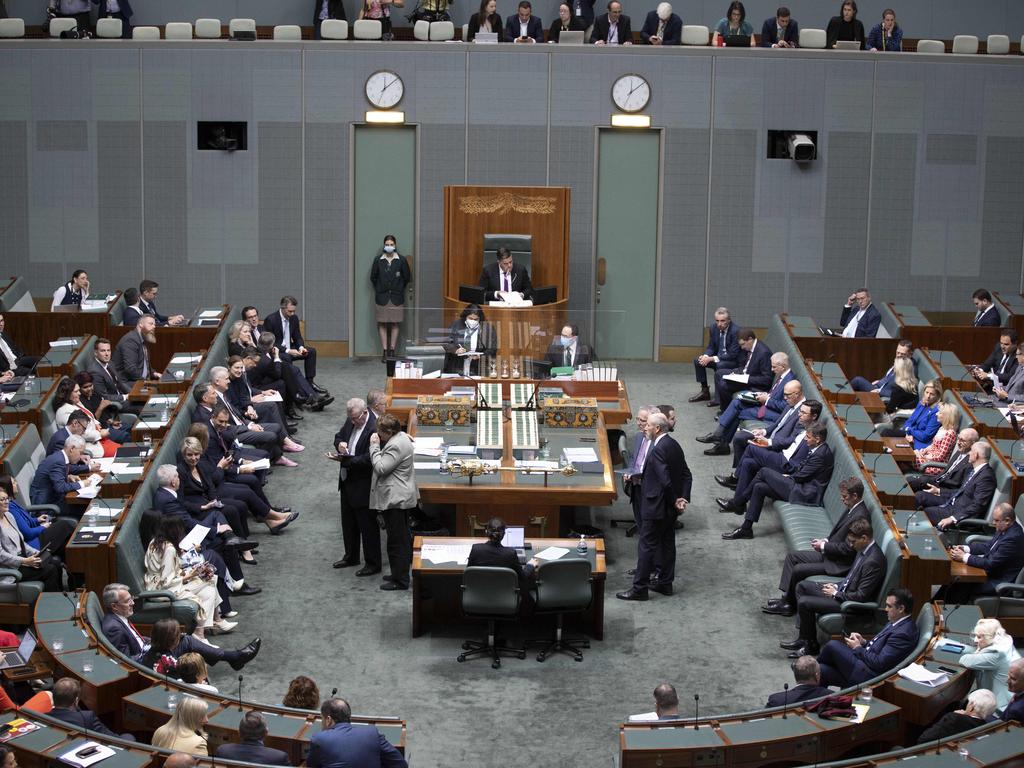 During his speech, Mr Morrison defended his government’s record during the pandemic.

ScoMo: I would have told the truth if journalists asked

Mr Morrison also said if any journalists had asked him about the secret arrangements he didn’t tell his own cabinet about, he would have told the truth.

Why lone Liberal spoke against ScoMoWhat censure means for ScoMo

“Had I been asked about these matters at the time at numerous press conferences I held, I would have responded truthfully,” he said.

Former deputy prime minister Michael McCormack also suggested that if journalists had just asked, Mr Morrison would have spilled the beans, despite the fact he didn‘t tell the cabinet, his Treasurer, his Attorney-General, his Finance Minister or the Home Affairs Minister what he had done.