A shocking video has emerged exposing a group of school leavers’ disgraceful behaviour on the first weekend of Schoolies in Surfers Paradise.

About 20,000 schoolies are expected attend the first week of celebrations, prompting extra police officers called on to keep watch over school leavers.

And while authorities have said the first night kicked off “spectacularly”, with only four people arrested on seven charges, one school leaver was less than impressed, posting a damning video on Sunday morning showing a trail of rubbish lining the beachside city’s entertainment strip, Cavill Ave.

“Schoolies, this is f***ed,” the school leaver says with a look of disappointment on his face. 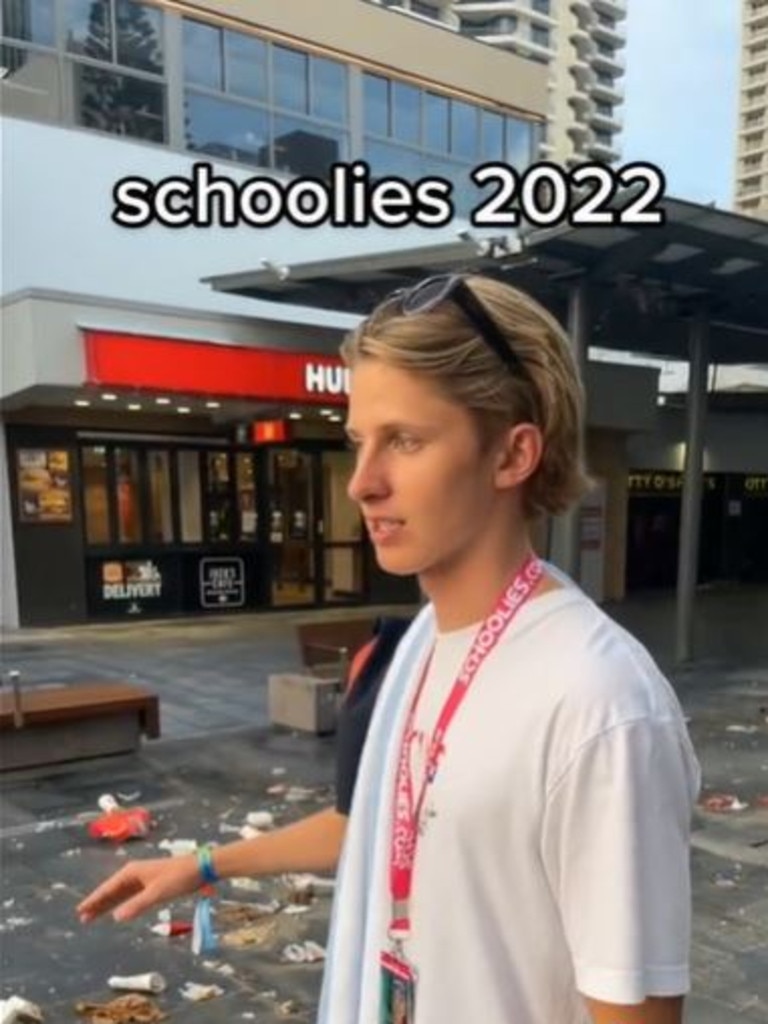 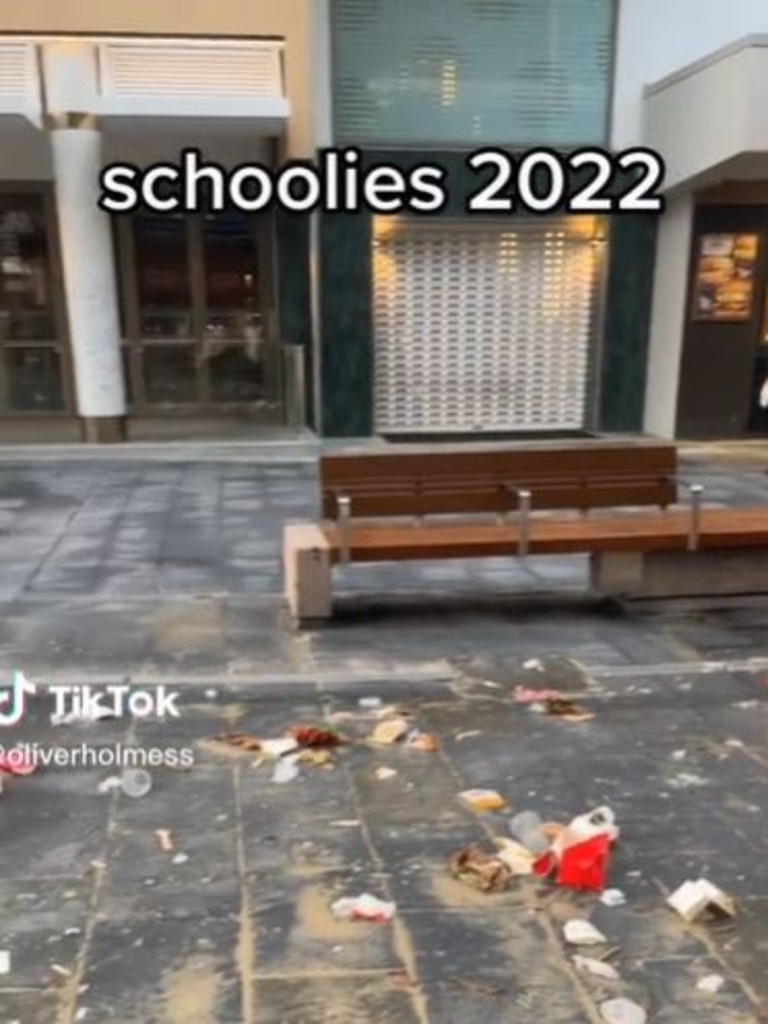 Calls out other school leavers saying “this is f**ked”. Picture: TikTok

The camera pans down the street to show it covered in a layer of fast food packaging and rubbish.

The TikTok video – which has amassed more than 270K likes – attracted outraged comments from Australians far and wide.

Some joked that this was to be expected by school leavers who have a reputation for letting loose during their end of high school celebrations. 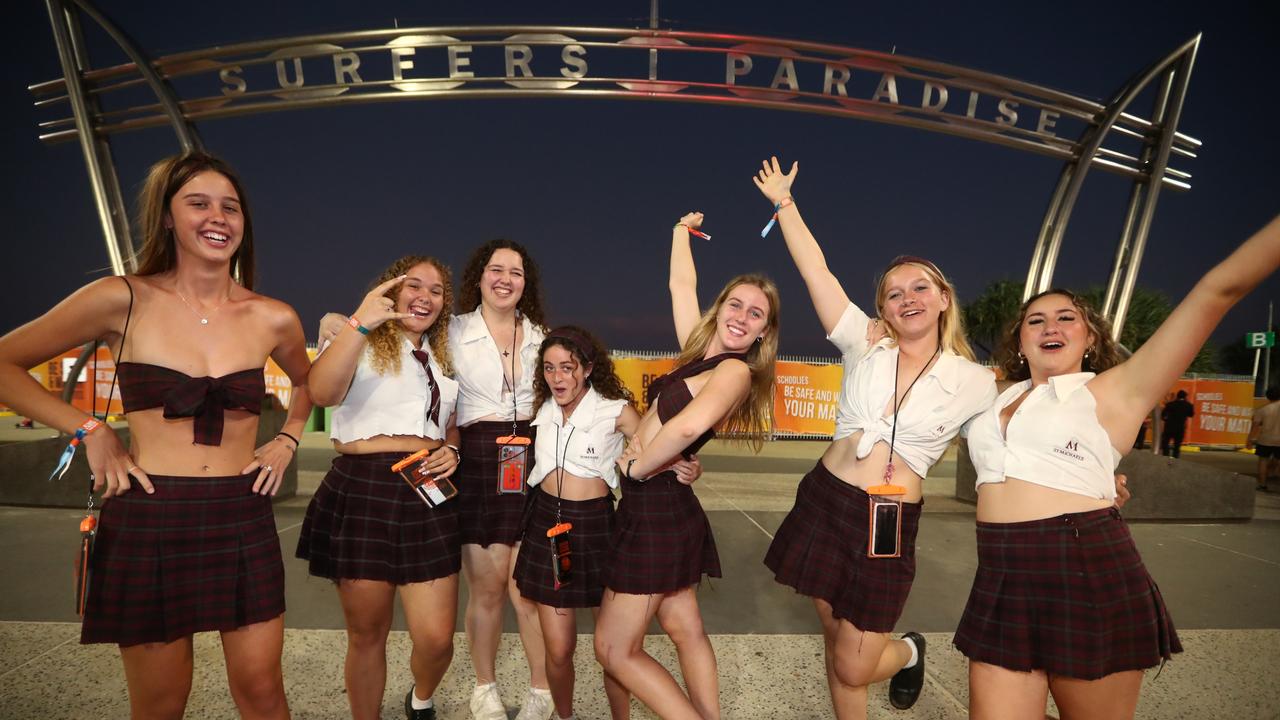 “The beach is right beside that strip – we don’t need anymore pollution harming our oceans,” a second user wrote.

However, a number of commenters were less critical, saying the street looks like that on most weekends and it’s not unusual for schoolies to leave a mess. 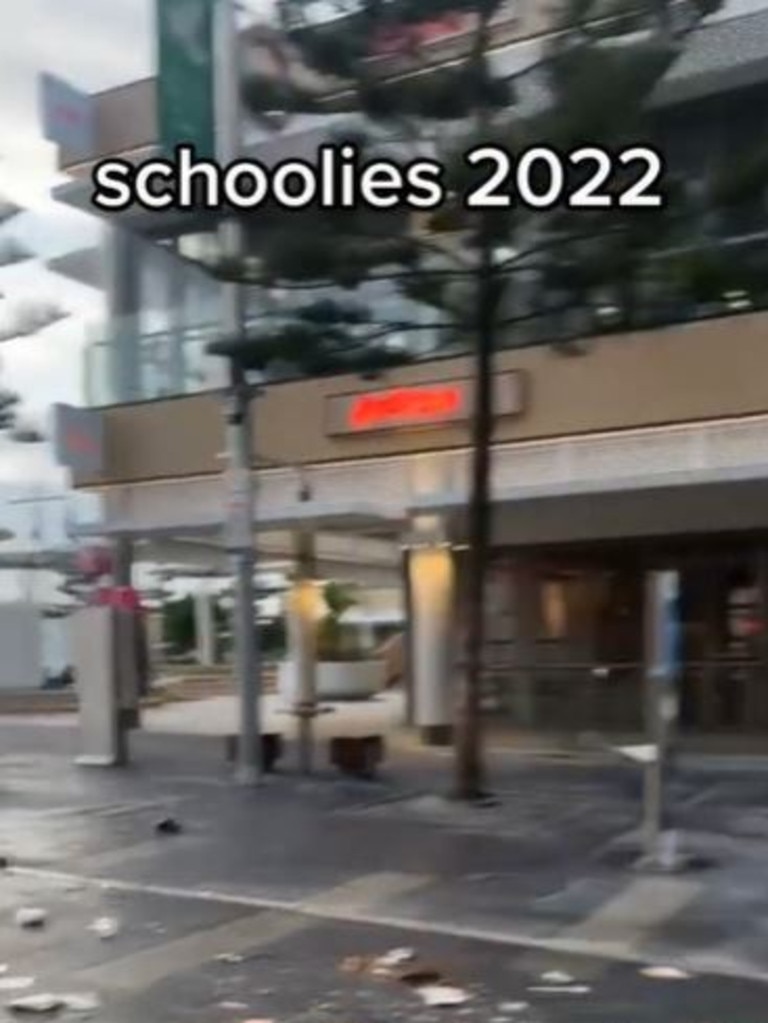 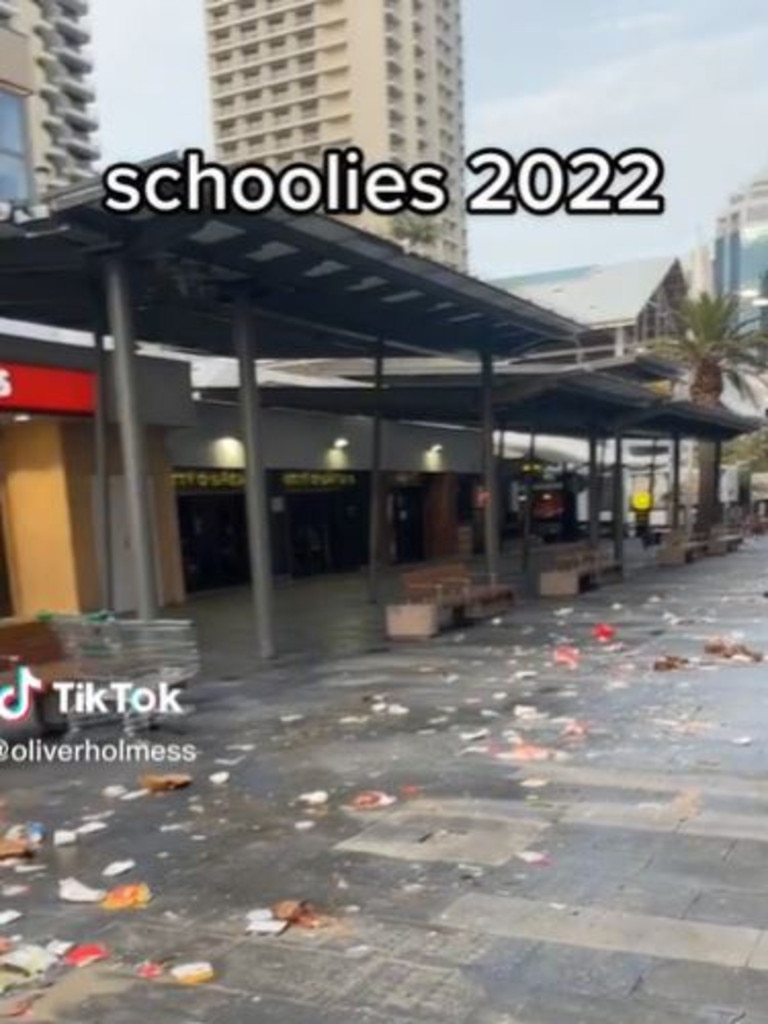 Others said it was not an unusual sight for a weekend in the iconic location. Picture: TikTok

“All we need is a teacher to tell them they have to pick up 10 pieces each before going out to play,” one person joked.

Despite this, police said the first night kicked off “spectacularly”, with only four people arrested on seven charges.

“We’ve seen our school leavers displaying a lot of maturity for their young years.” 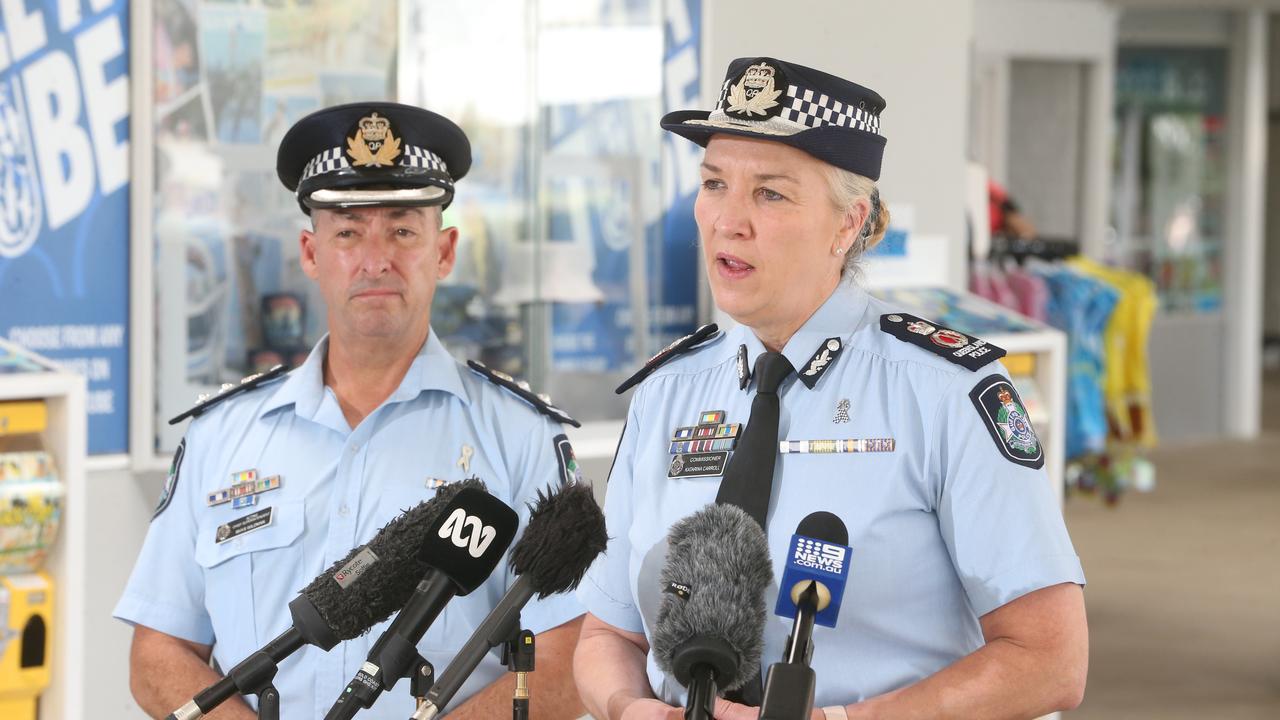 On the same night, three adults were arrested for carrying knives, all in Broadbeach, Superintendent Wildman said.

Police Minister Mark Ryan had earlier warned this year’s graduates to avoid the mistakes of years past.

He said while Schoolies had become an Australian “rite of passage” for many, it was important to put safety first.

“I urge all young people to look out for their mates, stick together, and check in on one another. Take note of your surroundings and take care while on high-rise balconies,” he said. 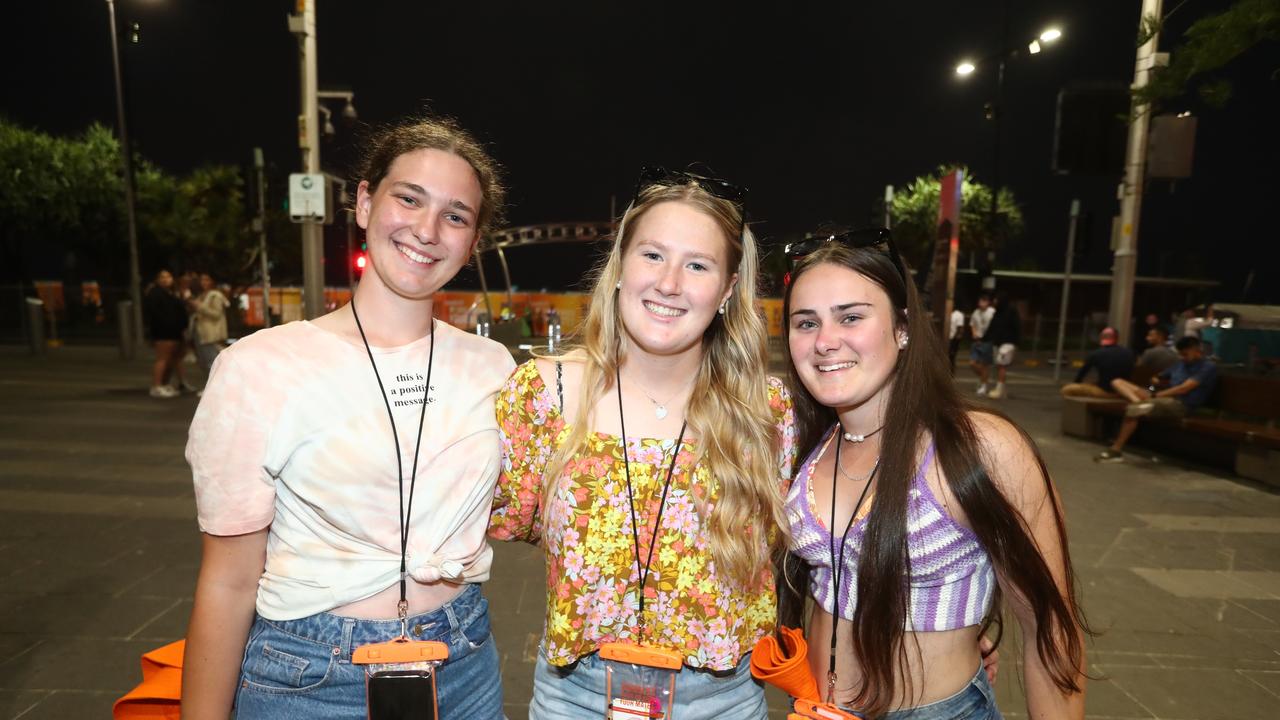 “Charge your phones, plan ahead and check in with your loved ones back home.”

In 2019, Melbourne graduate Charlie Scott died after falling from a high-rise hotel balcony.

The 18-year-old had been celebrating with friends when he fell from the Hilton Tower about 2.30am in the morning.

One year earlier, Hamish Bigood, fell from an 11th-floor balcony at the Surf Regency apartments on the Gold Coast.

His father told The Daily Telegraph at the time that his son had been hallucinating after drinking and inhaling nitrous oxide. 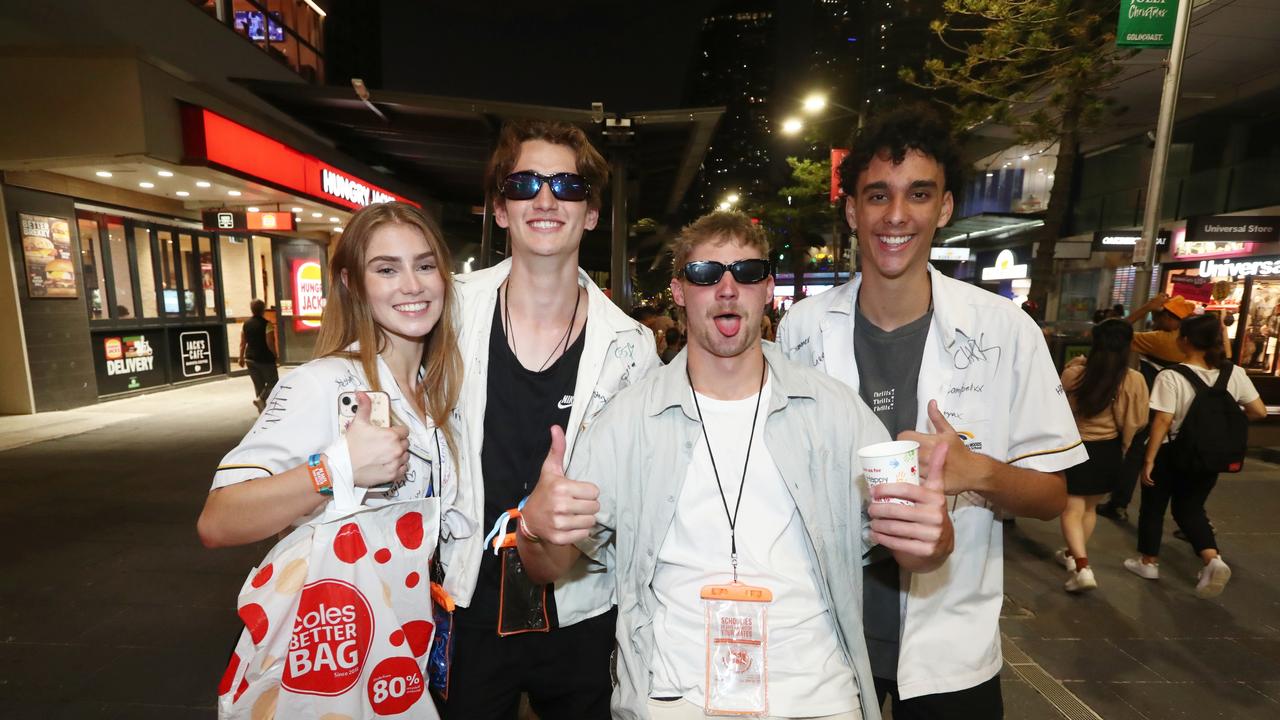 There will be an increased police presence on the Gold Coast this week. Picture: Jason O‘Brien

Queensland Police Commissioner Katarina Carroll said earlier there would be an increased police presence on the Gold Coast this week, with an estimated 130 officers on duty each night in the Schoolies precinct.

Police will conduct random wanding for concealed weapons within the Safe Night Precinct, while governing bodies will conduct venue checks for underage and fake IDs.

School leavers are encouraged to visit Recharge Zones located within the Schoolies Hub and along the Esplanade if in need of water or assistance. 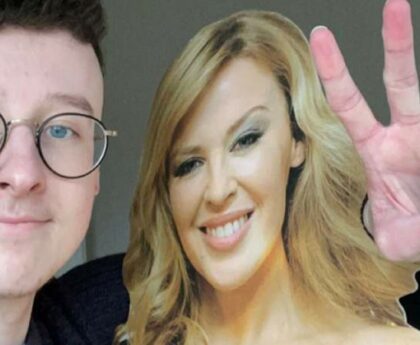