Teenage girls attending Schoolies have issued a warning to others after a number of partygoers received a series of vile messages from the same man.

Multiple girls said they had been contacted by the man in response to posts about selling or buying official Schoolies wristbands.

The wristbands are a requirement for those attending Schoolies on the Gold Coast, with the purpose being to prove the wearer is a genuine Year 12 school leaver.

Those with wristbands are given access to a number of government-run Schoolies events and services and are obtained by either registering online or producing a valid Australian Year 12 ID.

Schoolies officially kicked off last Saturday, with Facebook groups being flooded with posts from people selling or wanting to buy these wristbands. 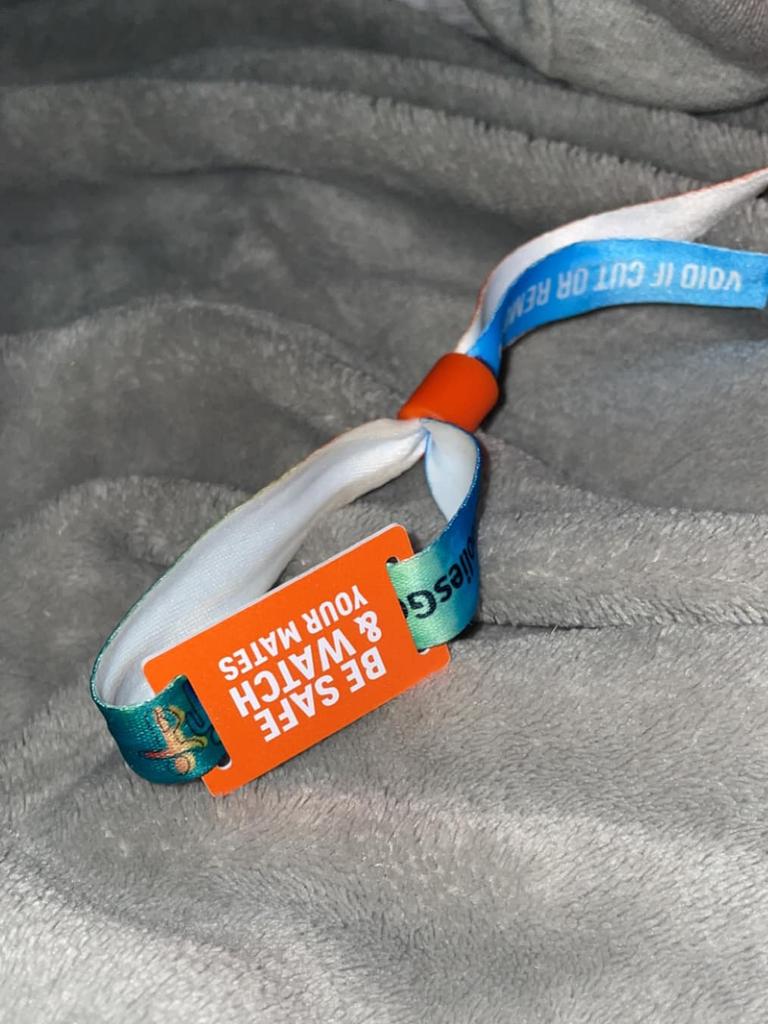 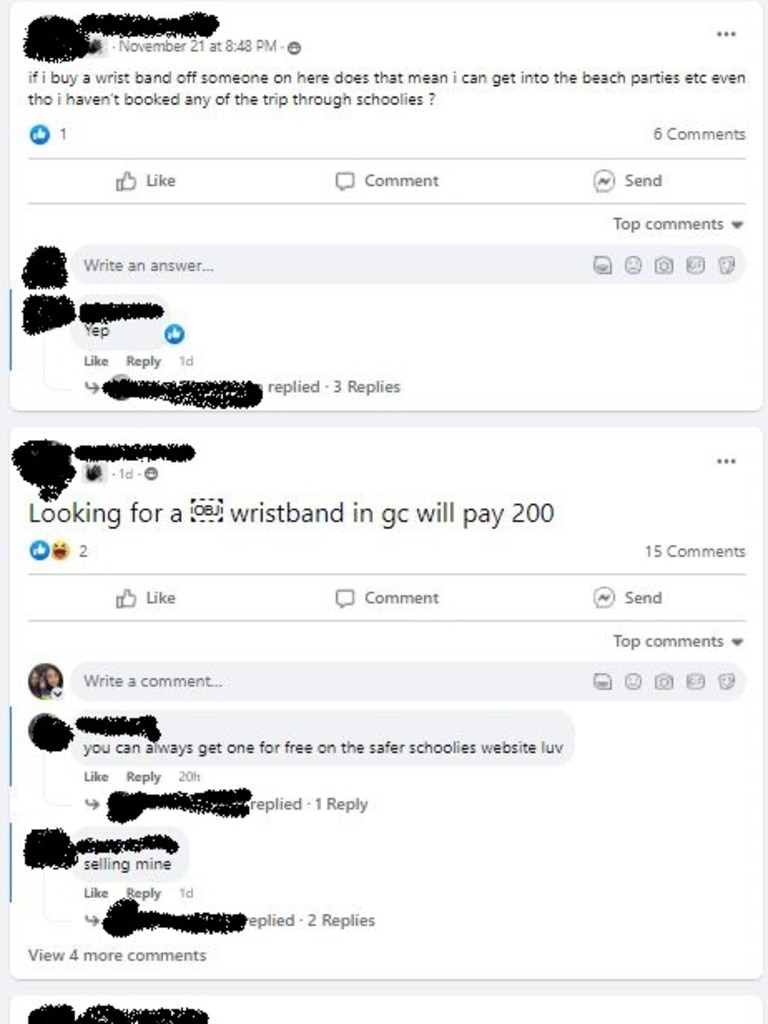 People have been making posts offering up to $200 for wristbands. Picture: Facebook

However, girls in these groups have been warned to avoid one particular account, which has been using the lure of wristbands to repeatedly ask the teens to send nude photographs.

On Tuesday night, one Schoolies attendee posts a message exchange she had with the man in question, urging others to “stay safe out there”.

“Just a warning for all you girls, don’t accept message requests from this desperate creep,” she wrote in one of the Schoolies Facebook groups.

The messages start with the man asking how much she wanted for the wristband, to which she replied, “$100 please”.

The teen responds that she will take the $300, prompting the man to question whether nude pictures were “included”.

“Wouldn’t have thought so,” she said. 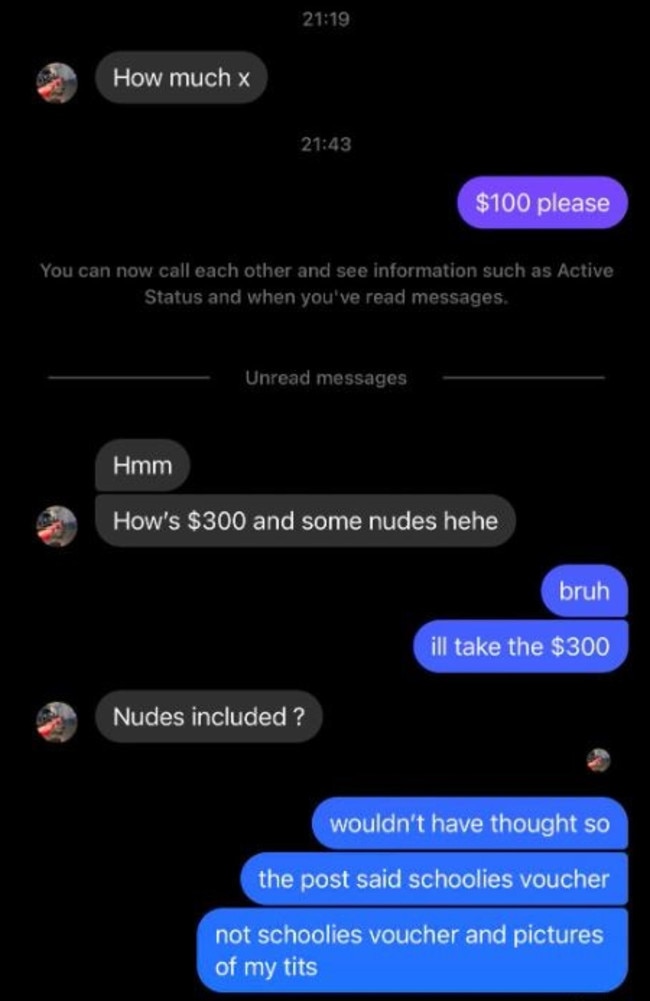 The teen posted the conversation as a warning to others. Picture: Facebook

The teenager’s post prompted a number of other women to come forward after having received similar messages from the same account.

In another exchange posted by a different teen – which was too vulgar to publish in full – the man called the girl a “s**t” when she refused his offer.

He also made a number of sickening sexually explicit references about the teen.

Another teen posted her encounter with the man after she responded to one of his posts selling wristbands.

The messages started out with the man asking what the school leaver was offering for the wristband and her age.

“How much are u looking for?”

“$150 cash.. or you can have it for free for some boobies hahaha,” he responded.

The 18-year-old responded that $150 was “cool” before asking when was the best time for her to get the band.

The man ignores this question, instead offering to give the girl “$200 for your panties”. Others shared their experiences with the same man. Picture: Facebook 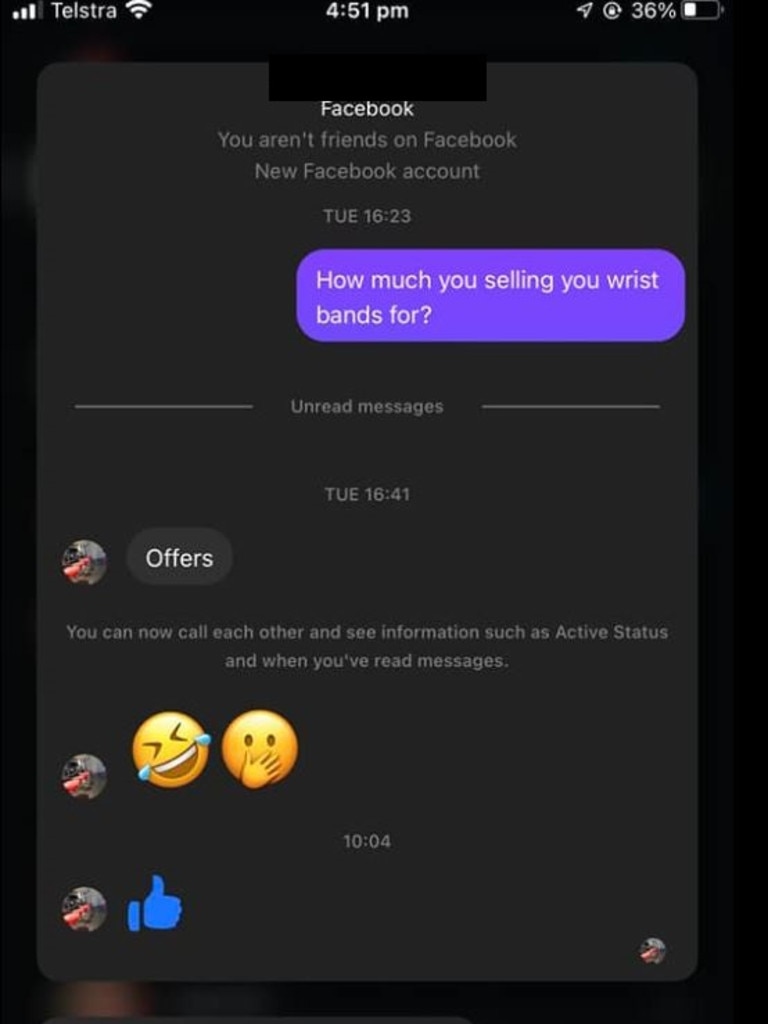 One teen revealed she was relieved she had never responded to his initial message. Picture: Facebook

Another commenter said she was glad she “didn’t answer after I asked how much he’d sell it to me for”, before posting their brief exchange.

The messages show the teen asking how much money the man wanted for the wristband, to which he responded “offers”.

When the teen didn’t reply he sent a laughing face emoji and another emoji with its hand over its mouth.

The list was shared to other partygoers by one teenager, who asked for help in ticking off the items listed.

The list included 10 challenges, the majority of which involve sexual acts with “chicks”.

One of the tasks listed was to “hook up with a disabled chick” and to have sexual intercourse “somewhere f**ked”.

A number of the challenges involved illegal drugs, including doing a line of cocaine off a “chick’s ass” and filming yourself having sexual intercourse while “ripping a cone” (smoking marijuana from a bong).

Other items included sleeping somewhere “f**ked”, defecating in a bed and getting a “f**ked tattoo”. 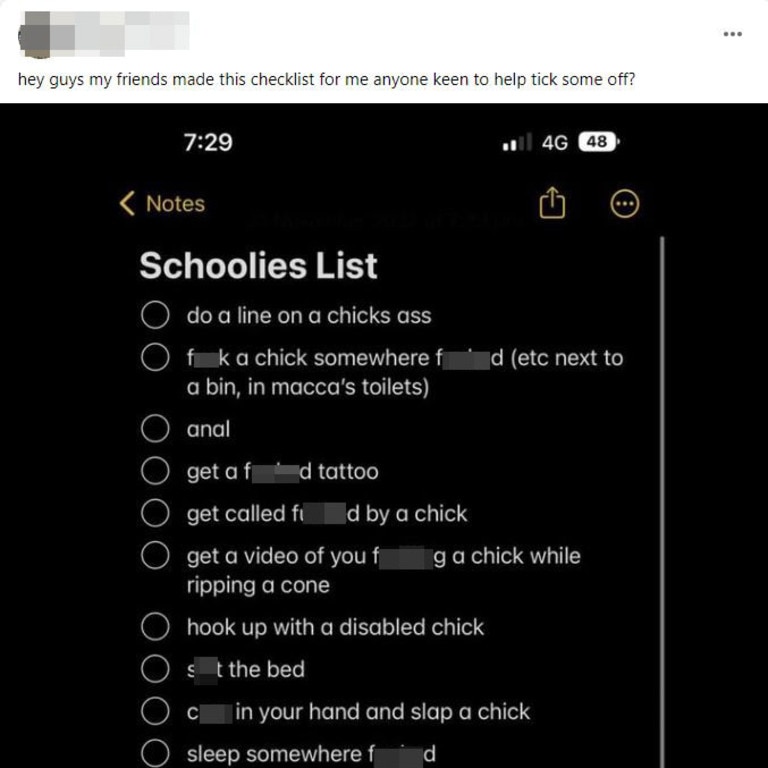 The disgusting posts were met with a number of likes and laughing emojis from other group members.

There was one commenter who took issue with the list and those that thought the post was humorous.

“Imagine thinking taking advantage of a disabled girl is funny,” one teenager wrote.

The poster was quick to defend himself, responding: “Never said take advantage did I. Can disabled girls not hook-up with people like every other girl?”

“Why not just hook up with a girl then instead of a disabled girl?” the commenter said.

‘What’s funny about that.”

The poster claimed he didn’t say it was funny, instead branding it an “act of kindness”.

“Because disabilities don’t bother me like they do some people,” he said.

Another commenter then jumped in to defend the poster, saying may be was “into girls with disabilities”.

“Girls with disabilities can get laid too,” they wrote. 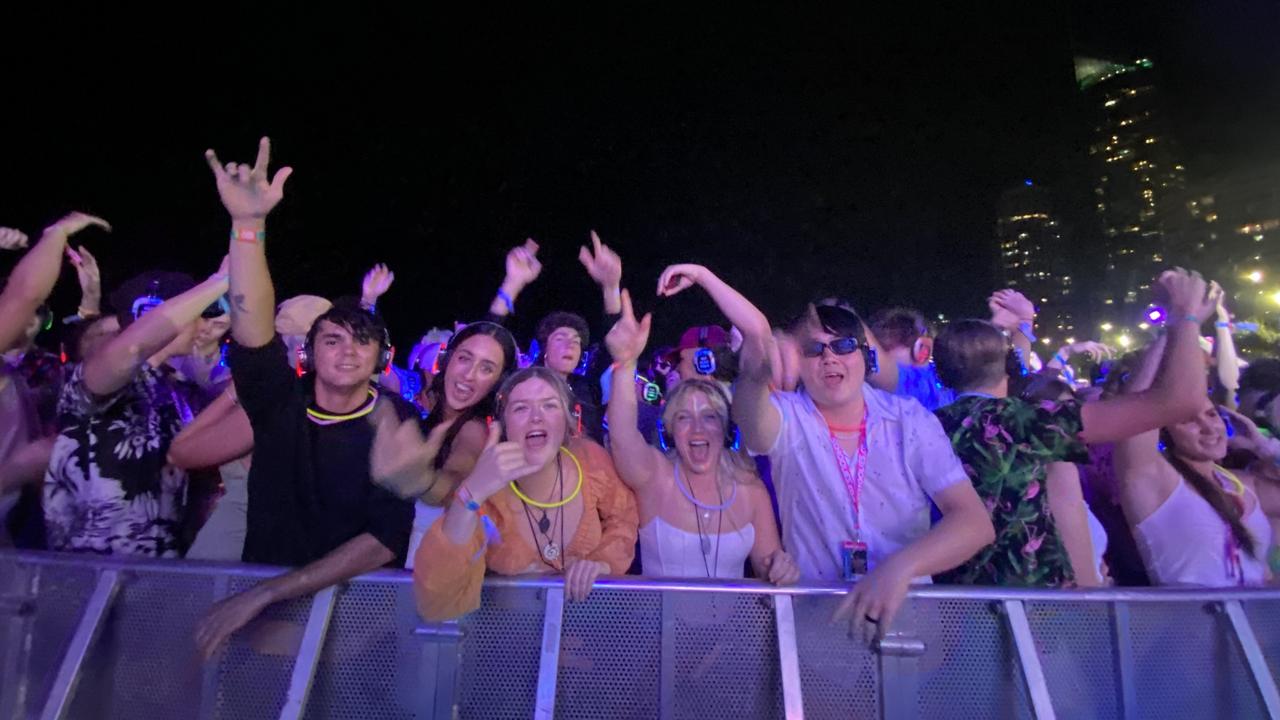 Schoolies attendees have been urged to ‘party safely’ and look out for each other.

NSW Schoolies warned by cops ahead of Week Two

Week one of Schoolies is almost over, with NSW school leavers set to descend on Surfer’s Paradise on Saturday for week two of the celebrations.

NSW Police encouraged school leavers to “party safely” and take care of one another.

Officers from Tweed/Byron Police District will be conducting a high-visibility operation, assisted by specialist police from the Dog and Mounted Unit, Youth Command, Police Transport Command, and Public Order and Riot Squad, in the Byron Bay region, NSW Police said.

Tweed/Byron Police District Commander, Superintendent David Roptell said police would be out in force, urging any school leaver who finds themselves in trouble to approach a police officer for help.

“Schoolies should be about enjoying yourself without regret – it’s not about overindulging, but rather about making good decisions and having fun safely with friends,” he said.

“Plan ahead, talk to your friends and family about where you are going, and celebrate safely – the last thing you want is to mark the end of your school life with the loss of a life or serious injury.”

Deputy Premier and Minister for Police Paul Toole said everyone had a role to play this Schoolies period.

“Schoolies is a rite of passage for many teenagers coming together to mark the end of 13 years of schooling – some of which were particularly challenging with Covid and flood-induced remote learning – but I encourage everyone to celebrate responsibly,” he said.

“As a father of three and a former school teacher, I know how much our students look forward to Schoolies each year, but please be safe, look after each other, keep local beaches and streets clean, plan ahead and as always, there is absolutely no place for illicit drug use, underage drinking or unruly behaviour.

“Our men and women in blue are there to protect you, so please be respectful as they go about their duties.”