Up to a metre of rain may have fallen by midweek in some parts of coastal Queensland as the January deluge continues.

Indeed, just about all the country could see some downpours in the coming week.

But for the south and west, scorching heat is the main weather worry with Adelaide and Perth approaching 40C, Melbourne not far behind and Sydney looking to finally crack 30C for the first time this summer.

And after that burst of heat, temperatures will then plummet with maximums 15C lower from one day to the next.

“Australia is in for a dynamic mix of summer weather this week, with flooding rain continuing in Queensland, dangerous thunderstorms to replace intense heat in the south, and an increasing risk of tropical cyclone development in the Coral Sea,” stated website Weatherzone. 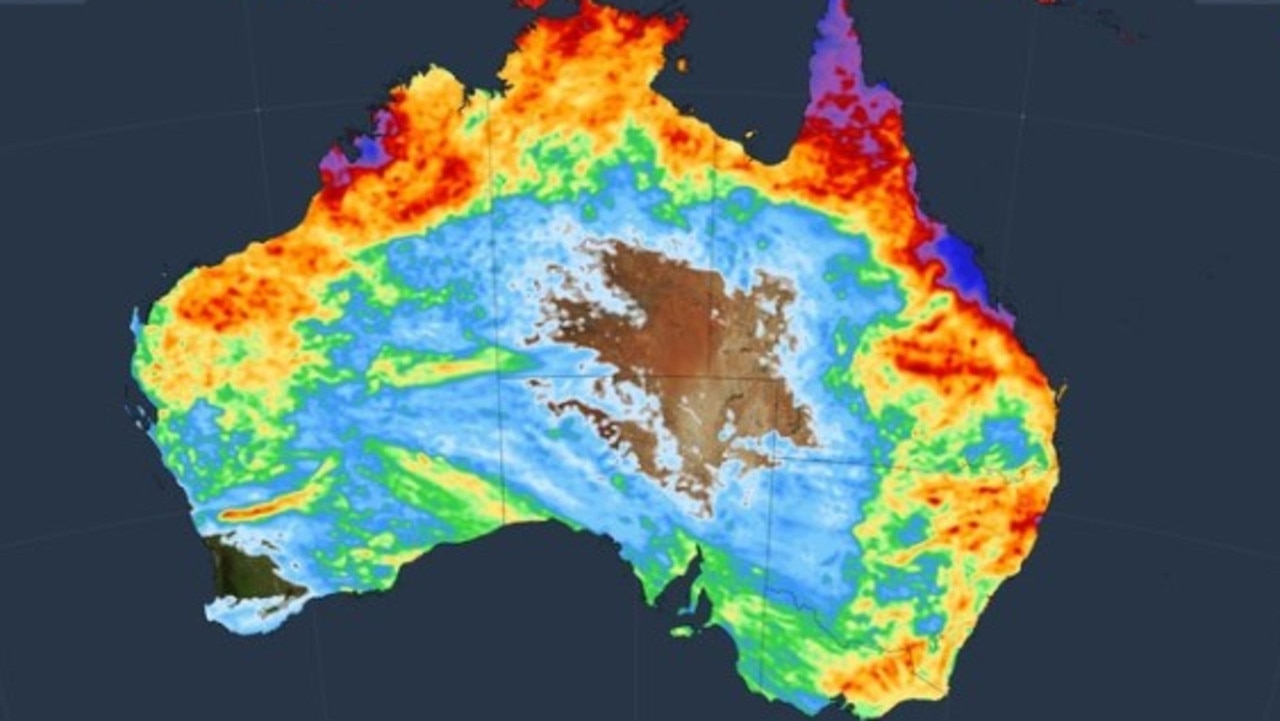 Drenching rains and scorching temperatures are due this week. Picture: Weatherzone

But Queensland is the focus where the “relentless rain is far from over,” said Sky News Weather meteorologist Alison Osborne.

“There is a constant supply of heavy rain zoning over that part of the Queensland coast like a laser beam,” said Ms Osborne.

“There’s a good chance that the end of this event, some weather stations will have gained over one metre of precipitation”.

Cairns is looking at up to 80mm of rain up to and including Thursday, Townsville could top 100mm while Mackay could see 200mm in the gauge on Tuesday alone.

The Bureau of Meteorology has a severe weather warning in place for the central coast and Whitsundays region of Queensland with warnings of isolated falls of 300mm on Tuesday which could lead to life threatening flash flooding.

And yet by the time you get to Brisbane, it will be a fine a dry week with barely a drop of the wet stuff. Temperatures should bob around the 29C mark possibly pushing 30C on Thursday with lows of 20C overnight.

Possible storms and showers in the Top End with 10-15mm most days and potentially 25mm for the end of the week. Darwin should see a week of 32C highs and 25C lows.

‘A constant supply of heavy rain zoning over the Queensland coast like a laser beam’. Picture: Sky News Weather. 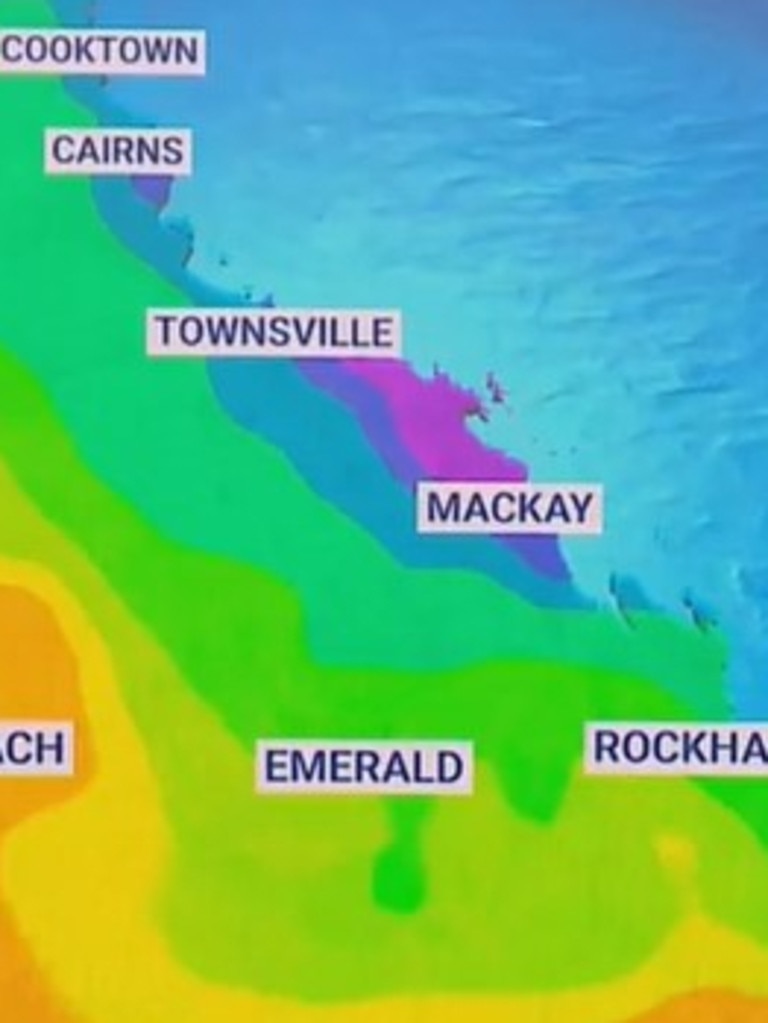 Down south, it’s all about the heat to start the week.

“It’s not a heatwave but it’s still hot. It will be breaking between 35C and 40C for South Australia, western Victoria and also through inland New South Wales,” said Ms Osborne.

A cold front will then move through South Australia on Tuesday night and Victoria on Wednesday.

“It’s going to be wet, windy, and stormy and the temperatures will drop.

“It’s a big swing between Tuesday and Wednesday for parts of the southeast; maximum temperatures will deviate by up to 15 degrees.”

Adelaide will top out at 38C on Tuesday with a possible storm in the afternoon or evening as that cool change arrives.

Overnight, expect a low of 18C and then a high of a mere 23C on Wednesday with a possible shower.

The rest of the week should be around the mid-twenties for Adelaide with mid teen minimums. 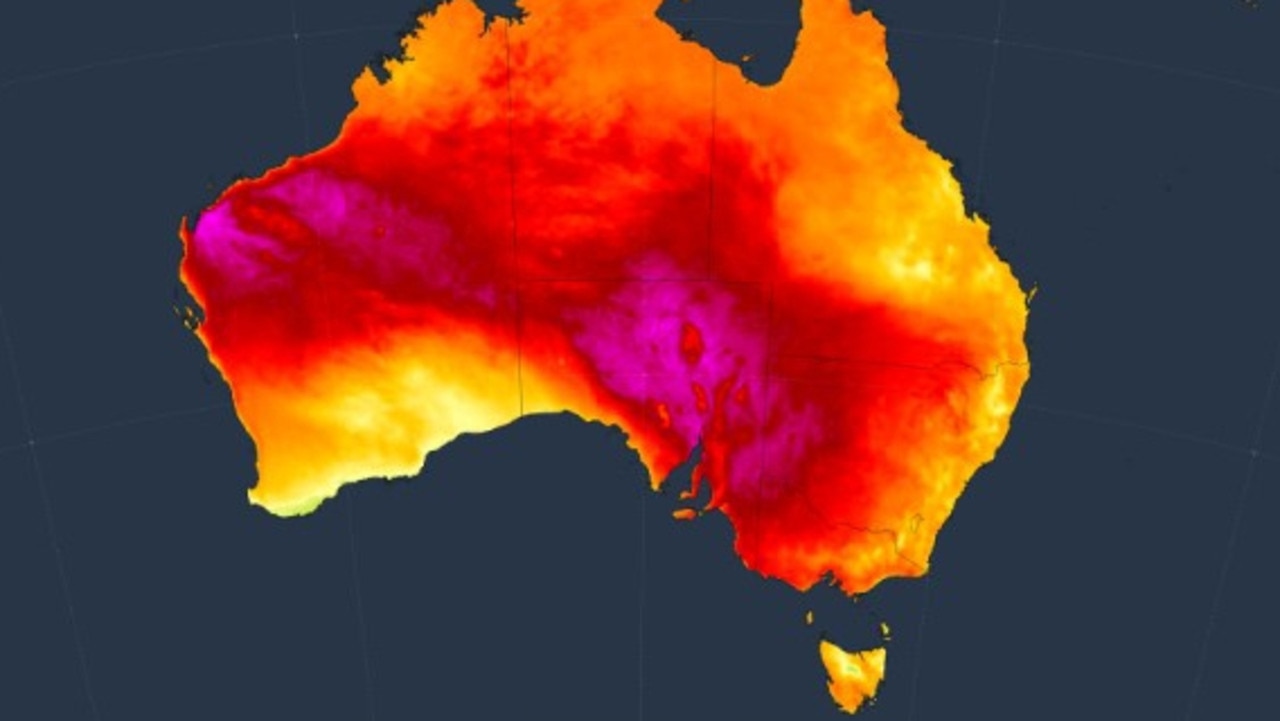 The heat will be punishing on Tuesday with near 40C in Adelaide. Picture: Weatherzone

In Victoria’s north west, Mildura will see up to 42C on an oppressive Tuesday. But then a marked drop to 27C for Wednesday.

Colder still on Thursday reaching just 19C but it should get warmer towards the weekend.

A high of 30C in Hobart on Tuesday, and then 22C on Wednesday with up to 8mm of rain, and 18C on Thursday. The minimums could be down to just 11C first thing on Thursday in the Tasmanian capital.

Cooler in Devonport with 25C on Tuesday and then a run of 20C days. Wednesday could be wet. 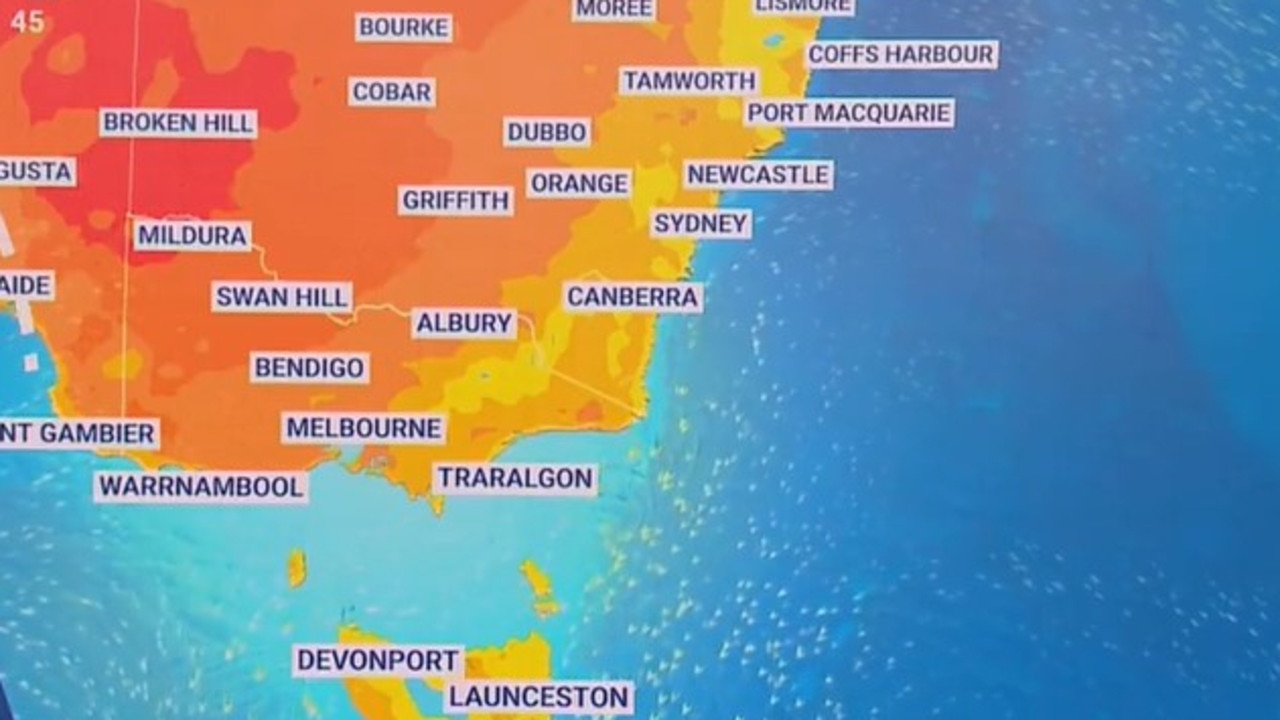 It’ll be toasty on Tuesday for the south east. Picture: Sky News Weather. 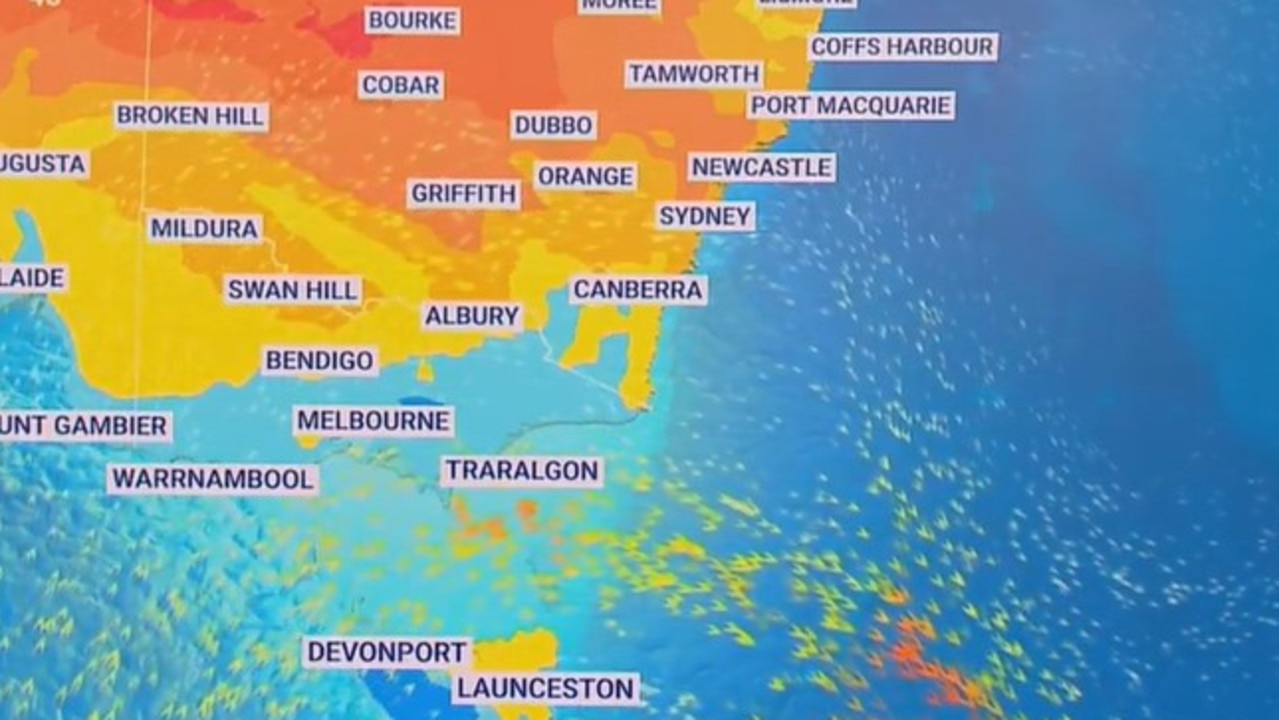 “For the NSW coast, this will be your chance too finally see some real summer heat with Sydney exceeding 30C,” said Ms Osborne.

The best chance of a 30C day in Sydney will be Wednesday which should see glorious blue skies. Tuesday is forecast to get to 28C but by Wednesday temperature swill have dropped to a high of 24C and up to 10mm of rain. Minimums in the Harbour City will be in the high teens.

Both Tuesday and Wednesday in Canberra may be over 30C with a storm possible midweek. That will then bring the mercury down to a 20C maximum on Thursday with some rain. The capital will see 13C lows at dawn this week.

For Perth, expect a mostly dry week with some absolutely scorching days approaching. A 29C high on Tuesday will then rise to 32C on Wednesday and possibly up to 38C by the weekend.

The maximums may well not be below 30C for at least a week from Wednesday onwards. Minimums will be the low to mid-twenties.

Perth may miss the rain but some spots north and south of the city are possible. While the state’s north, around Broome, could see some more pronounced wet weather.