Police have revealed what led to the dramatic armed arrest of two men in a Hungry Jack’s drive-through.

Tactical operators and detectives from the Northern Territory Police Force were dressed in casual clothes – including one in a Centrelink branded singlet – when they surrounded a ute with guns drawn on Thursday afternoon.

Authorities were chasing a 30-year-old man as part of a “high-risk operation” after he allegedly breached parole conditions.

NT Police would not say what the man had been in jail for or when he was released, but outlined a series of alleged offences he had committed since January 3.

“He refused or failed to submit to a drug test as part of his conditions and that activated a basic follow up where Serious Crime detectives tried to speak with him (and) he barricaded himself in a house and it escalated from there,” Detective Senior Sergeant Karl Day said on Friday. 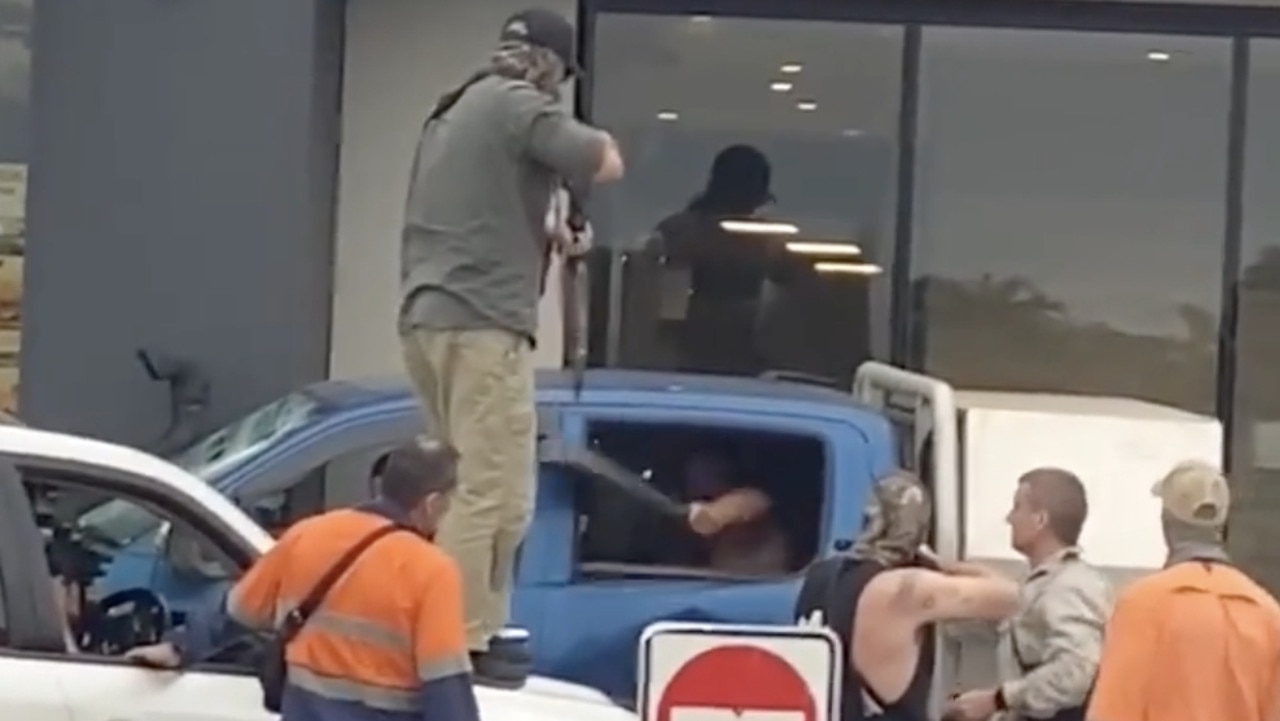 On Thursday morning, it is alleged he assaulted people in a house in the suburb of Gray, about 23 km southeast of Darwin’s CBD, with a crossbow and then returned an hour later with a shotgun.

Snr Sgt Day said the different groups came together at 8am and “basically” followed the alleged offender all day with intention to arrest him.

At about midday police allege the man was seen driving dangerously in a stolen Toyota HiLux ute, and at about 4.30pm the Territory Response Group tried to arrest him as he filled up at a service station.

“However he managed to escape by diving into the back of the Toyota ute,” Snr Sgt Day said.

At about 5.30pm the ute drove through the Hungry Jack’s drive through in Coolalinga, an outer suburb of Darwin. 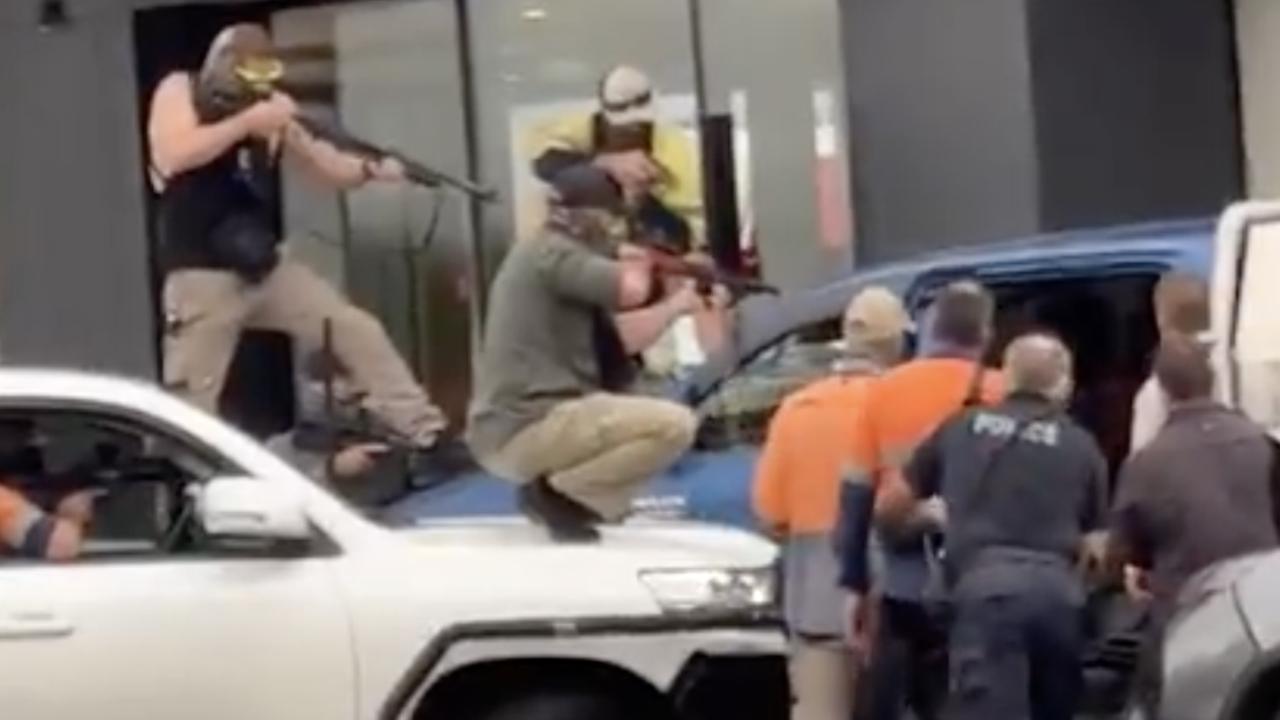 Two men were arrested but police have yet to release details about what for. Picture: Jesmar Paclibar

Dramatic video captured by onlookers showed a confronting sight as a group of men dressed in casual clothes swarmed the blue ute.

Two men from the Territory Response Group with camouflage face coverings – one wearing a Centrelink branded singlet – could be seen pointing shotguns at two men inside the cabin.

Others involved in the operation were dressed as what appeared to be tradies, while uniformed police stood at the rear of the ute where there was also a smashed-up silver car.

Snr Sgt Day said the ute had reversed “at speed” into a member of the public’s car while trying to evade police at the drive through.

Bean bag rounds were fired as well as tasers and pepper spray.

The 30-year-old man was eventually arrested and a second man, 31, in the ute was also arrested.

Snr Sgt Day said “it just happened to be” after the arrest that the 31-year-old was an active target for the Domestic Violence Unit for domestic violence offences and had outstanding warrants. 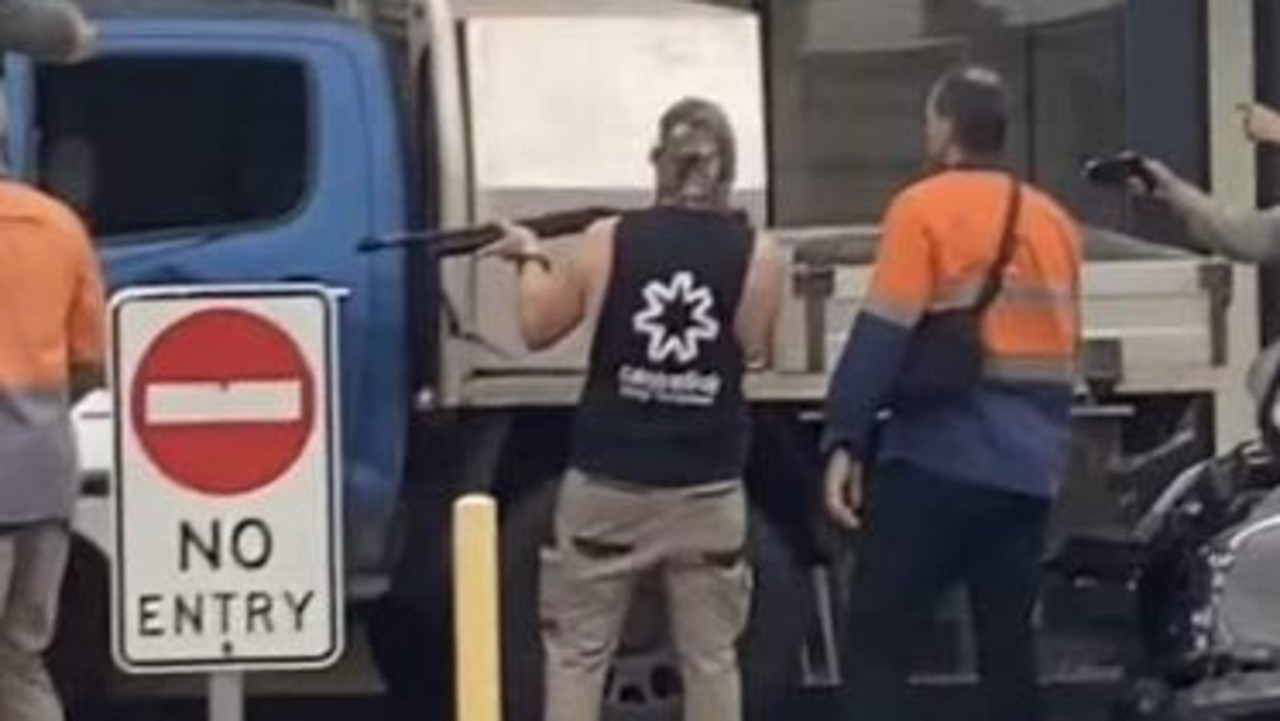 Police allege they found a shotgun, shotgun cartridges, a crossbow, knives and drug paraphernalia in the ute.

Snr Sgt Day said the reason for the plain clothes worn by Territory Response Group operators and detectives was because “any activity involving obvious police” escalated the alleged offender’s behaviour.

“Someone who more than likely was affected by drugs, driving erratically is an extremely dangerous situation, so they dressed down to not alert him to the presence of police,” he said.

Snr Sgt Day defended the dramatic arrest outside the Hungry Jack’s drive through as professional and necessary, and said no one was hurt.

“He was followed all day and that was the opportunity that arose and we took it,” he said.

Both men are in custody and are expected to be charged with a series of offences.

A mother whose 14-year-old son was working at the Hungry Jack’s at the time said the young staff were terrified when they saw people with face coverings and guns.

“They all hid in a back room for an hour not knowing what was going on,” she wrote on Facebook.

She said it was “extremely worrying” to receive “a heap of messages” from her scared son at the time.