A man who killed his teenage passenger in a fatal beach crash and had shown “no insight” to his offending will walk free from jail in nine months.

Lynden Joshua Roby was sentenced to three years’ jail for causing the death of Harrison “Harry” Payne in a horrific incident north of Brisbane last year.

But Roby, 20, will walk from jail in less than a year after a District Court judge ordered his sentence be suspended when nine months was served.

Roby’s family members said “good outcome” as he was led away to the cells to begin his jail term.

In a disturbing twist, Crown prosecutor Mark McCarthy told the court that Roby, 20, had racked up multiple traffic offences after Mr Payne’s life was taken. 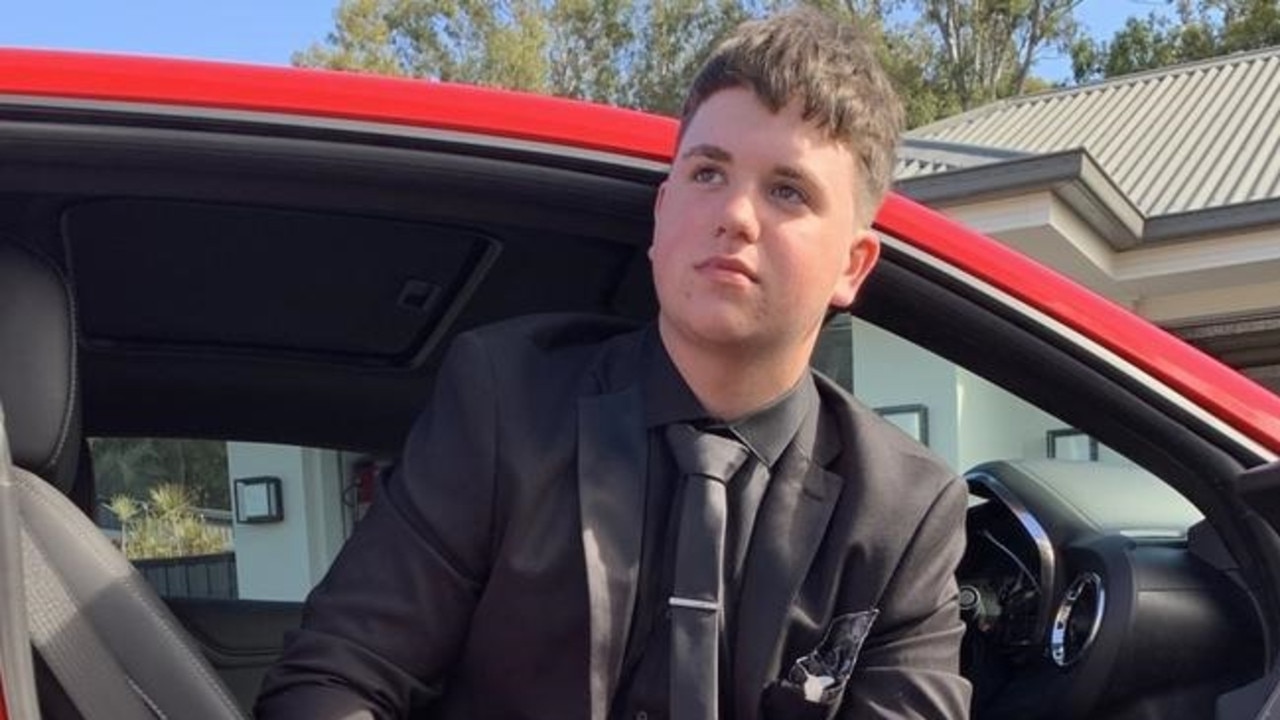 Harrison Payne was killed in a horrific crash in May last year after Lynden Joshua Roby rolled his 4WD on Bribie Island.

“His post offence conduct does not speak of an individual who has insight to the serious offending behaviour he engaged in,” Mr McCarthy said.

He said Roby was a “continuing danger to the community” while driving.

In a display of grace outside court, Mr Payne’s parents Kent and Kylie Payne told waiting media they “respect the outcome”. 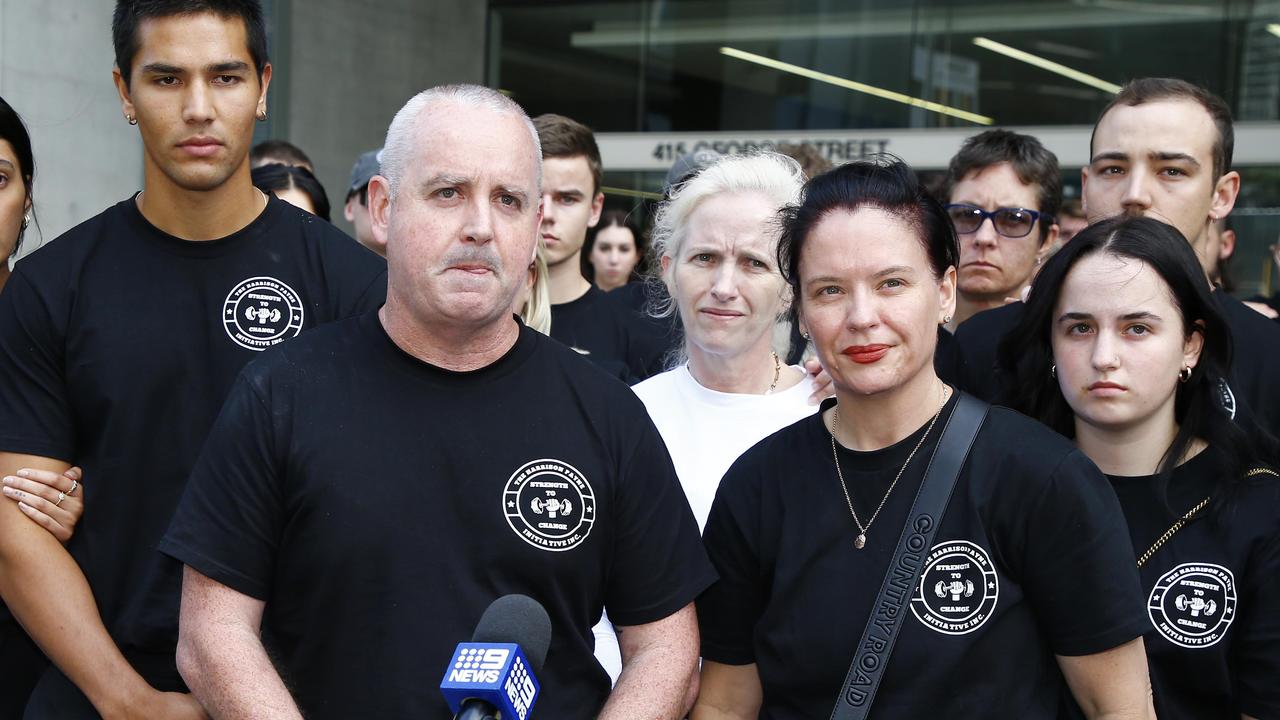 Kent and Kylie Payne (centre) said they ‘accepted’ the court’s decision after Lynden Joshua Roby was sentenced to three years in jail for causing the death of their son Harrison in a car crash on Bribie Island. Picture: NCA NewsWire/Tertius Pickard

“No jail time was ever going to bring Harry back,” Kent said.

He thanked the legal teams who had supported the family through the process and the emergency services who helped his son on the day of the crash.

“We know Harry was a loved member of the family and community … he’s touched a lot of people.”

Ms Payne said their aim was to keep their son’s legacy alive through The Harrison Payne Initiative, a not-for-profit that raises awareness around beach, 4WD and road safety and supports victims of road or beach trauma. 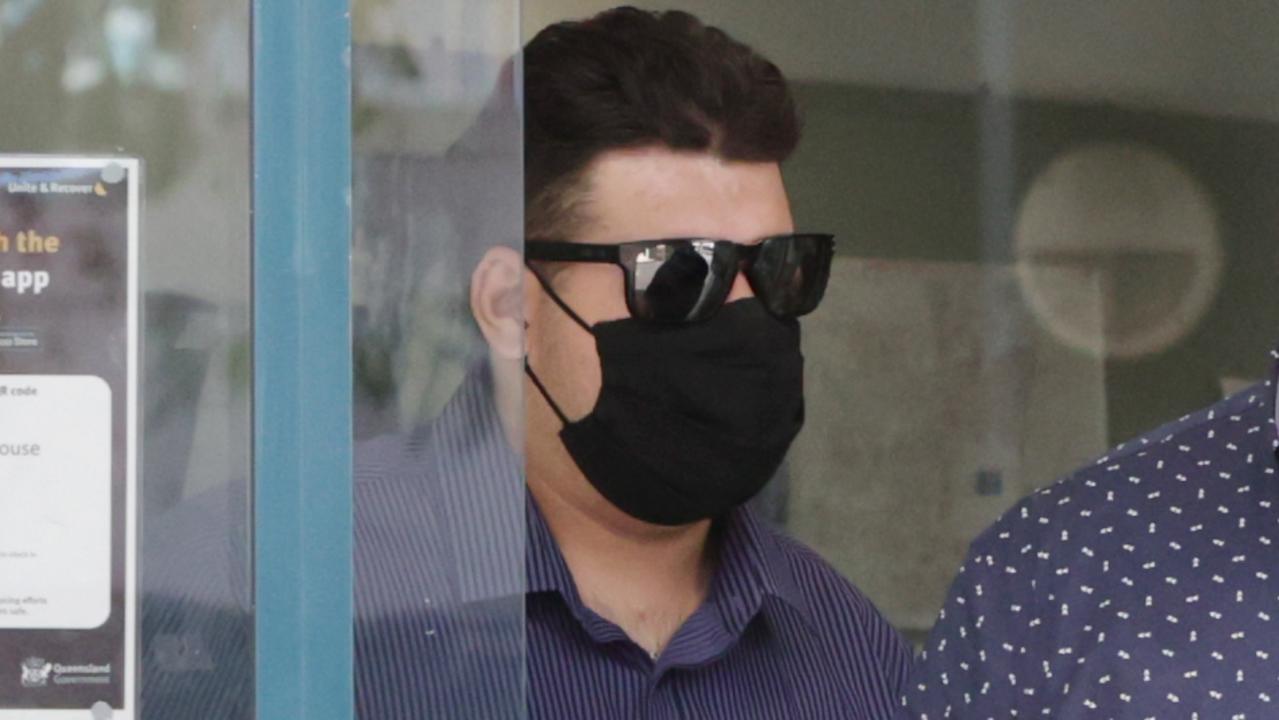 Mr McCarthy said the pair were part of a “convoy” of young people who had met at the beach.

“They appeared, at times, to be racing each other,” he said. 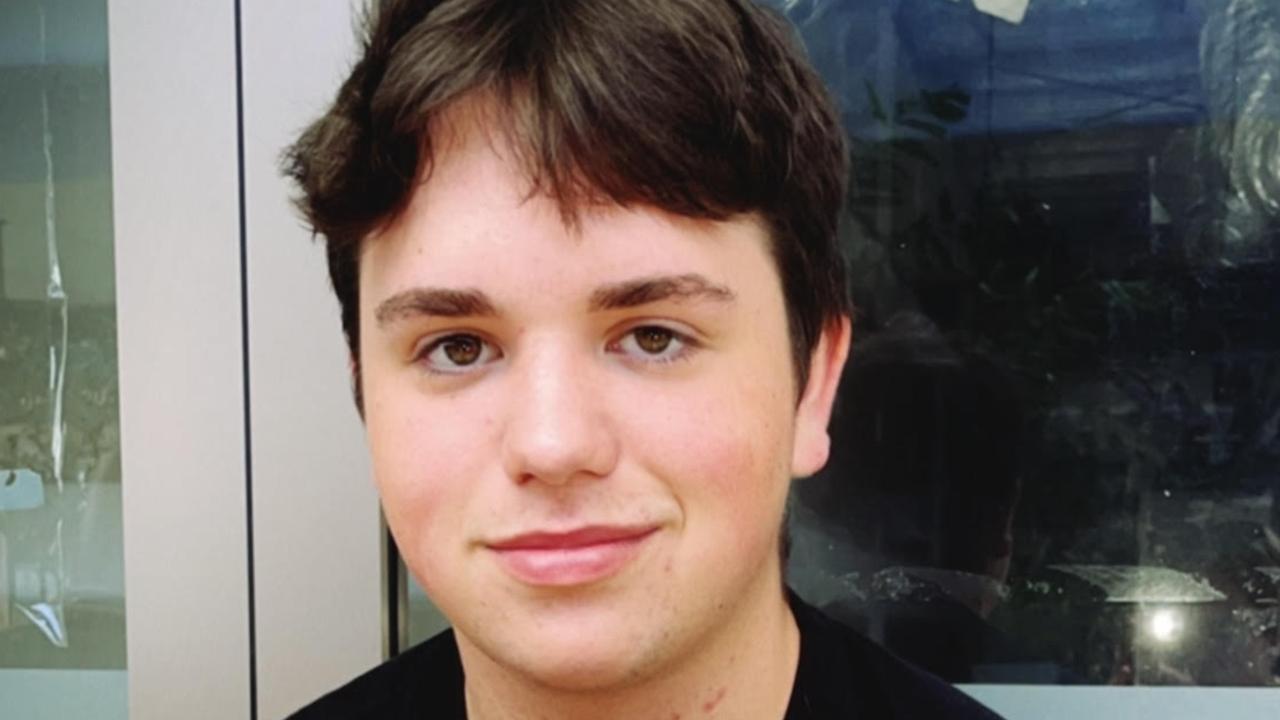 Mr Payne was thrown from the vehicle and killed instantly after Roby rolled his 4WD while driving dangerously on the beach.

Roby performed “power slides”, doughnuts and fishtails before his car rolled on the driver’s side.

“His head was crushed between your vehicle and the beach,” Judge John Allen said during his sentencing.

“You deprived him of the rest of his life and others of the benefit of that life in the future,”

Mr Payne was thrown from the vehicle onto the wet sand and died at the scene.

The court was told immediately after the crash Roby said: “I’m a f–king idiot, it’s all my fault.”

Roby claimed he tried to straighten up and brake but was not forthcoming with his full driving, Mr McCarthy said.

“Over a protracted period, the defendant engaged in deliberately dangerous driving,” he said.

“The vehicle was driven at excessive speeds … he had participated in a course of driving which was clearly dangerous.” 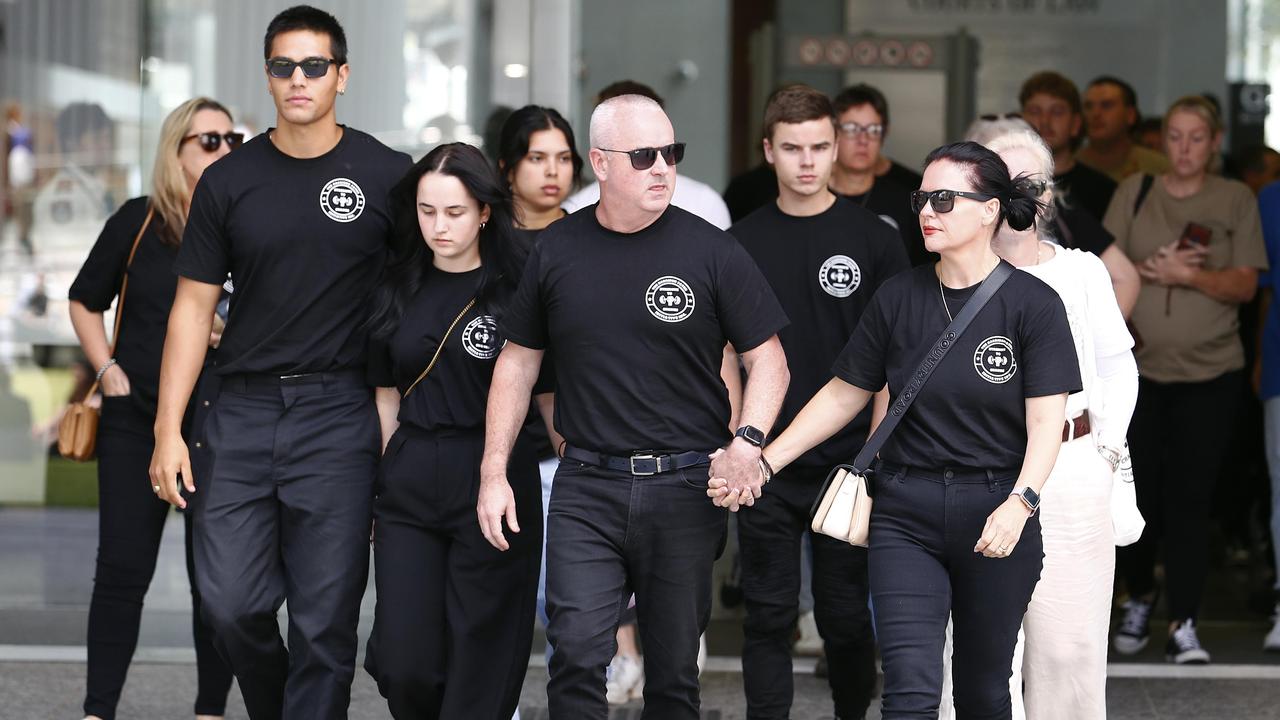 The Paynes told the media no sentence would ever bring their son back, Picture: NCA NewsWire/Tertius Pickard

Mr McCarthy emphasised that Roby’s conduct after the fatal crash showed he had “no insight” to his offending as he had been caught by police for multiple traffic offences.

One involved him performing burnouts in an industrial estate just five months after the crash.

In others committed throughout the year, he was caught speeding in school zones and driving through red lights.

A Snapchat taken by Roby in June last year was tendered to the court. Mr McCarthy said the 20-year-old could be heard revving an engine excessively as others laughed in the background.

Mr McCarthy also showed images of Roby’s TikTok, where he brags in March he has come “a long way” in a couple of months while posing with a new Nissan Navara.

The court was told it was the same vehicle Roby was pulled over in by police for some of the traffic offences.

In heartbreaking victim impact statements, members of Mr Payne’s family spoke of their “constant grief” and how their house, once filled with laughter, was now “tainted with sadness”.

Kent Payne claimed Roby had shown “no remorse” since his son’s death by insisting he had done nothing wrong.

“What an absolute joke,” he said.

“I’m so disgusted, so appalled by your actions.

“You took Harry from us, you are responsible for his death. It should never have happened.” 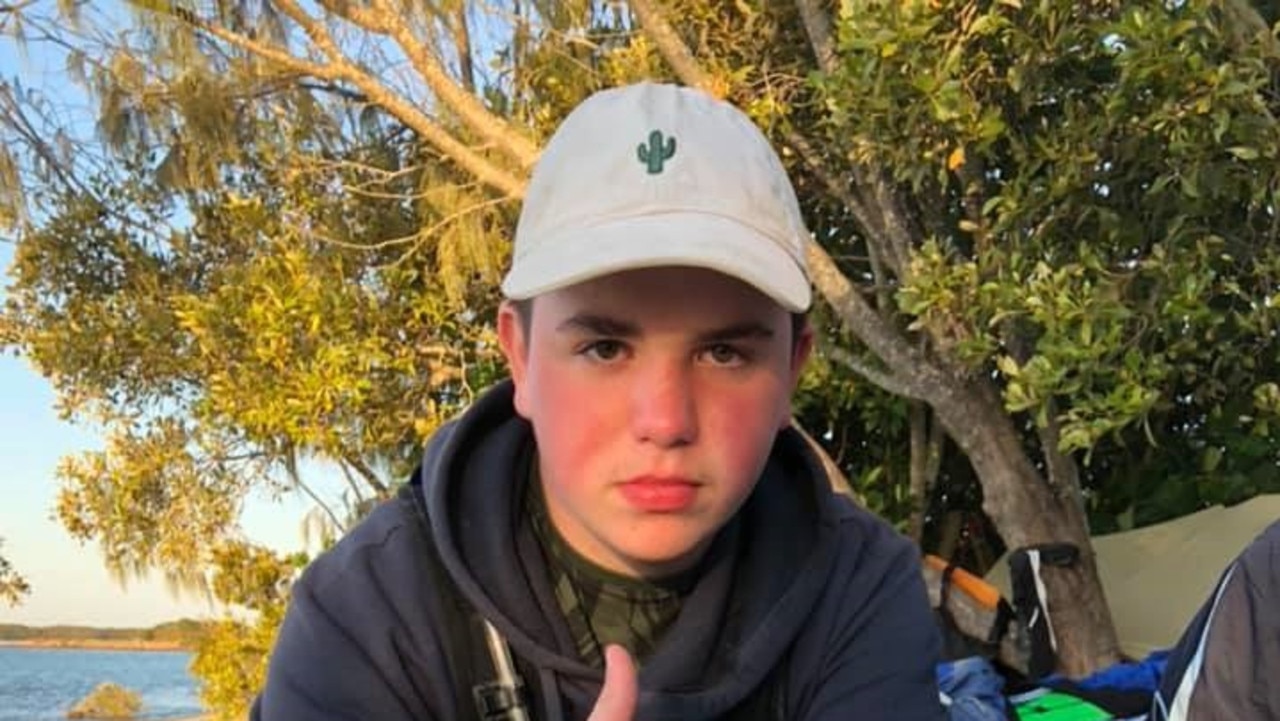 Harrison’s death had sent shockwaves through his family, who were all grappling with the scale of his loss.

Ms Payne said the last moments she spent with her son were “beautiful”, as the family joked about the pants he was wearing to a friend’s party.

Tragically, these pants – bought with a birthday vouched weeks earlier – were the same ones her son would be cremated in.

“The thought of my baby boy, alone by himself, still breaks my heart,” Ms Payne said.

“I wanted to be with him, to hold his hand, keep him warm.

“We lost a devoted son, someone who always saw the positive in every negative.”

Roby’s barrister Patrick Wilson said his client had penned a letter where he indicated remorse, grief and the “profound impact on what he’s done”.

“He acknowledges the harm he has caused, to Harry’s family,” Mr Wilson said.

“He speaks of being consumed by overwhelming feelings of grief, going into a self-destructive episode.

“He says he suffers from depression, anxiety and suicidal ideation.”

The court was told Roby was suffering from post-traumatic stress disorder and was “mentally unstable” after the crash.

Mr Wilson said his client was “not a man in a good frame of mind”.

During discussions with a psychiatrist, Roby said he wished he had died in the crash instead of Mr Payne, the court was told.

He otherwise had no criminal history or anti-social personality traits.

In sentencing Roby to three years’ jail, he also disqualified him from holding a driver’s licence for three years.

Judge Allen said Roby was not being punished for his litany of driving offences since the crash, but they “informed” his assessment of the sentence.

“They suggest you present a continued risk to other road users,” Judge Allen said.

But he accepted Roby was remorseful despite his misgivings about his PTSD and subsequent post-offence conduct.