A Sydney man has been charged after attempting to conceal $39 million of methamphetamine inside bottles of olive oil.

Australian Federal Police’s National Anti-Gangs Squad (NAGS) discovered 281kg of liquid methamphetamine inside a truck in the Sydney suburb of Fairfield on July 30, 2022.

The investigation into the illicit drug, known as Operation Bendigo, allegedly linked the 29-year-old man to the shipment.

A search of the man’s Granville home on September 21, 2022, resulted in AFP officers seizing a number of phones and a computer for further examination. 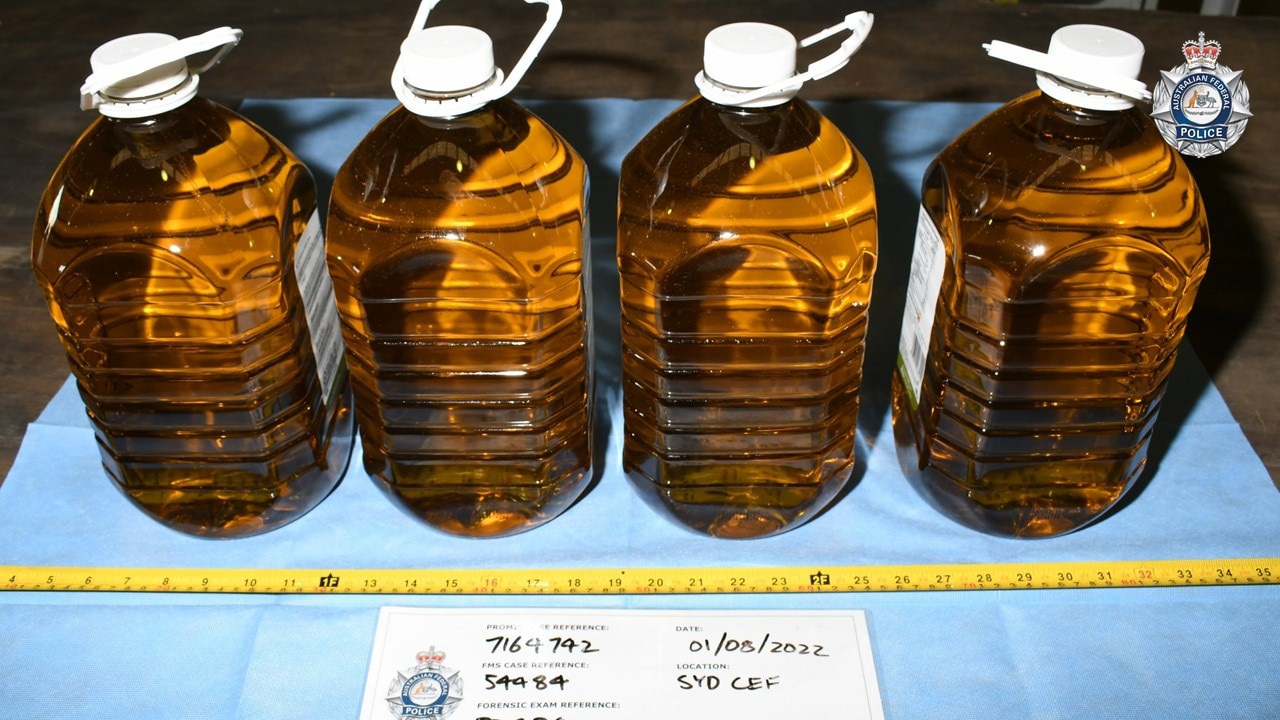 The liquid methamphetamine was found hidden inside bottles of olive oil. Picture: AFP

He is believed to be connected to transnational organised crime group involved in the facilitation of drug importations with Outlaw Motorcycle Gangs, according to police.

He was charged with importing and attempting to possess a commercial quantity of an unlawfully imported border controlled drug, namely methamphetamine, contrary to section 307.1 of the Criminal Code 1995 (Cth).

The estimated wholesale value of the methamphetamine is approximately $39 million.

The man is expected to face Parramatta Local Court today.

National Anti-Gangs Squad Superintendent Anthony Conway said the outcome of the investigation showed NAGS commitment to disrupting criminal groups and cracking down on the importation and supply of illicit drugs. 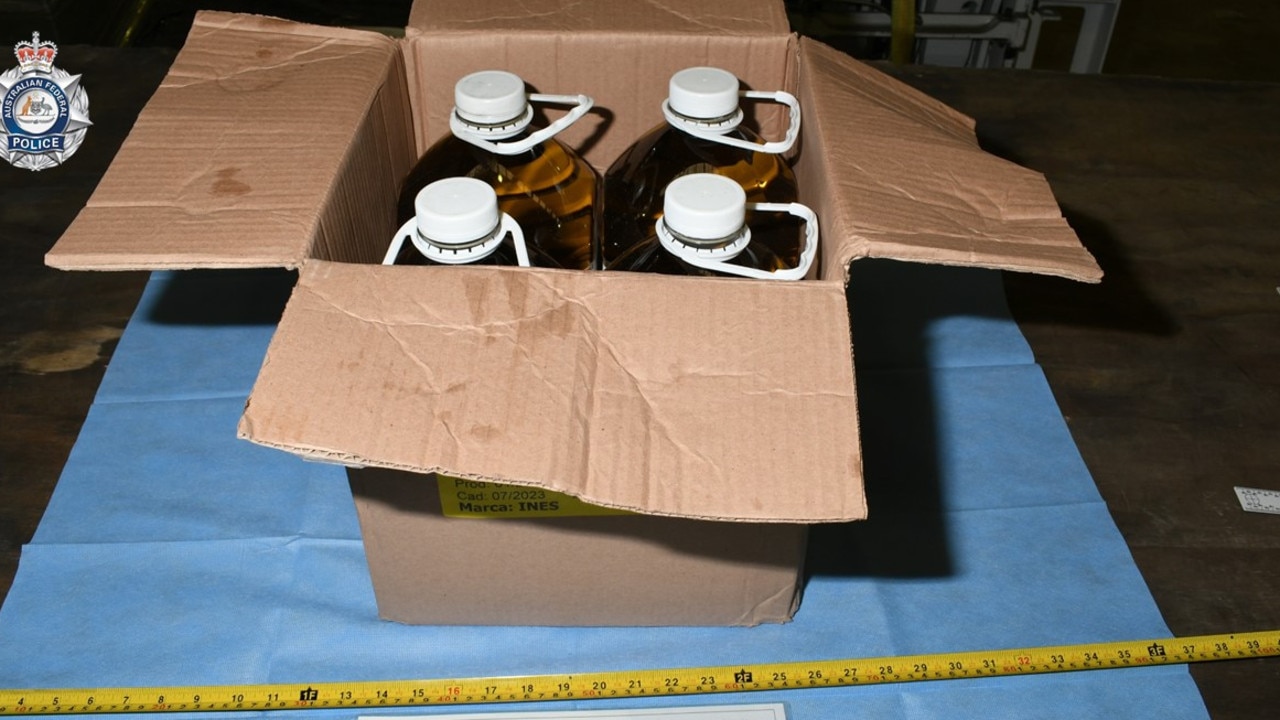 A man has been charged in relation to the discovery. Picture: AFP

“The AFP working together with our state and territory partner agencies will continue to take deliberate action to best protect Australians from organised crime groups including OMCGs.” he said.

“Criminals should realise it is inevitable they will be identified, arrested and prosecuted. It should also remind people who want to join or associate with OMCGs that ultimately, joining a gang will be a decision they will regret for life.”

The NAGS group is made up of members of the AFP, State and Territory Police forces and members from the Australian Taxation Office.

Earlier this year, a record-breaking 1.8-tonne stash of liquid methamphetamine disguised as coconut water was intercepted on its way to Australia.

The drugs — worth more than $1.6 billion — were identified on intelligence developed by Australian Federal Police officers in Mexico and the Australian Department of Home Affairs.

The AFP said it and Border Force made the seizure with the help of Hong Kong Customs and Excise, which found the drugs on October 23. 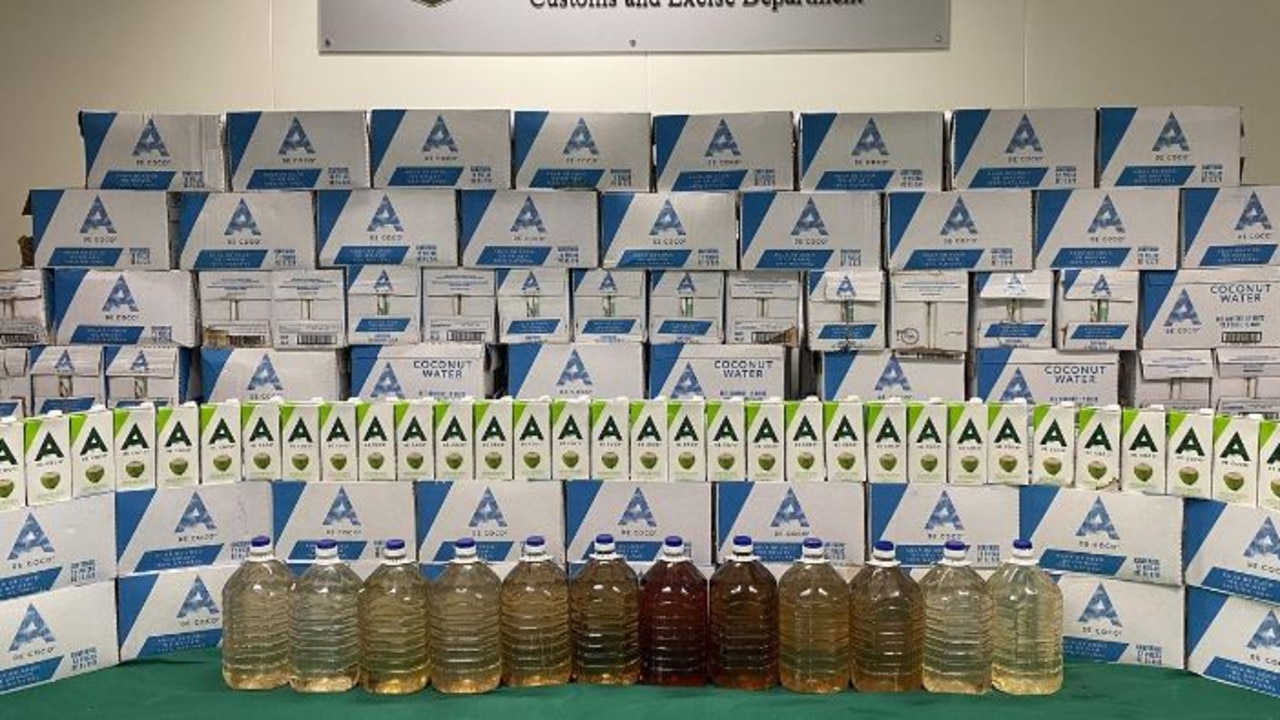 Nearly 2 tonnes of liquid meth disguised as coconut water was intercepted in Hong Kong on its way to Australia. Picture: AFP

AFP officers based in Mexico were able to identify the illicit consignment hidden inside of cartons of coconut water which was en route to NSW via Hong Kong.

The drugs had an estimated street value of AUD $1.62 billion or a wholesale value of $540m.

“The harsh reality is that Australia’s problem of illicit drug use is bankrolling a raft of dangerous and brutal cartels, triads and outlaw gangs,” AFP Detective Superintendent Patrick Gordon said.

“These criminals undermine our national security and our economy. They make our suburbs and roads less safe.

It is estimated that amount of meth could have led to 18 million street level deals in Australia – saving the community around $737m in drug-related harm including associated crime, healthcare and loss of productivity.