A traumatised mum has revealed the “vomit-inducing” story behind a photo of a toppled over chest of drawers.

The shaken parent revealed she was feeding her newborn when she heard an “almighty crash” coming from the room her two-year-old was playing in.

After rushing to the room to assess the damage, she found the heavy chest of drawers tipped onto the floor and immediately thought the worst.

“I came out to see this. And I thought my two-year-old was under it,” she told CPR Kids, who posted the horror story to social media on Monday.

The mum said that “by some miracle” her child had manouvered himself out the way before he was crushed.

“If he had been [under the drawers] I hate to think what the consequences would have been. By some miracle, he managed to get clear of it before it fell,” she said.

“I suspect he opened all the drawers which shifted the weight.

“My point is, we’re very safety conscious but we moved into a temporary rental and didn’t want to damage the walls by securing the chest of drawers.”

Reflecting on the decision she said: “how stupid was that?” 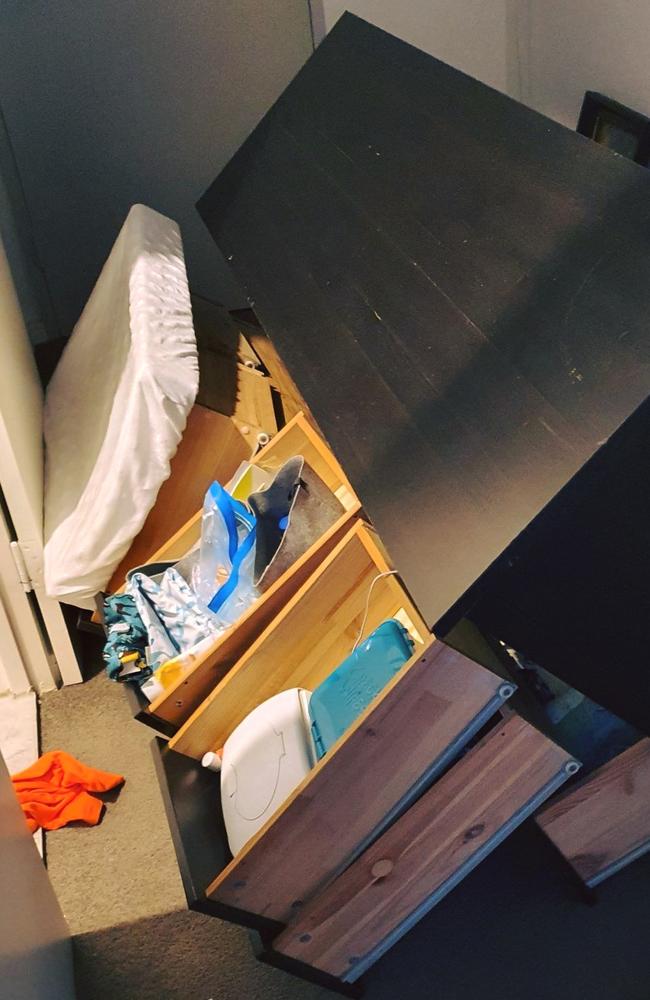 A mum has revealed the moment she thought her son was crushed under a heavy chest of drawers. Picture: Facebook

The horrifying ordeal, which the mum described “vomit-inducing”, served as a powerful reminder for parents to secure their furniture to the wall, even if they were renting.

“We were so lucky and so I wanted to share our close shave to perhaps help others think twice,” the mum said.

At least 14 children under nine years old died in Australia between 2000 and 2015 from domestic furniture falling on them, CPR Kids revealed.

“When we think of securing furniture many of us think of TV straps and bookcase safety without thinking that something as seemingly ‘safe’ as a chest of drawers could pose a risk,” the organisation said in its post.

“For the record we are so glad this little one is okay and we don’t think this is stupid at all. It isn’t uncommon for even the most safety-conscious parents to consider only the more obvious safety risks in the home.

“Also worth noting, toddlers can often surprise us with what they are capable of, particularly when we are caring for and feeding their younger siblings making it that much harder to keep a close eye on them.”

Parents should also put locking devices on all drawers to prevent children from opening them and using them as steps.

Heavy items should not be kept on shelves or bookcases and small children should be discouraged from climbing on furniture.

Parents were also warned not to put items likely to tempt their children on top of furniture, particularly on unstable furniture near where the children play.