Property agents appear to have outed themselves as blatantly greedy in an email that was intended to stay with staff but leaked online this week.

In the email, Australia’s biggest apartment development company, Meriton, instructed employees to take advantage of the current market to get more money out of renters.

“Hi all, as you are all aware, the market is on fire and vacancy extremely low, so please ensure you’re pushing rents as hard as possible,” the email, shared to Facebook and Reddit, read.

“Students are arriving and we will see record numbers this year.

“For HOT/family units, please ensure you push above targets, especially if you have nothing available and doing six month leases.

“For landlord units, I recommend starting with a six month lease, as this gives you the opportunity to increase the rent sooner in a rising market. 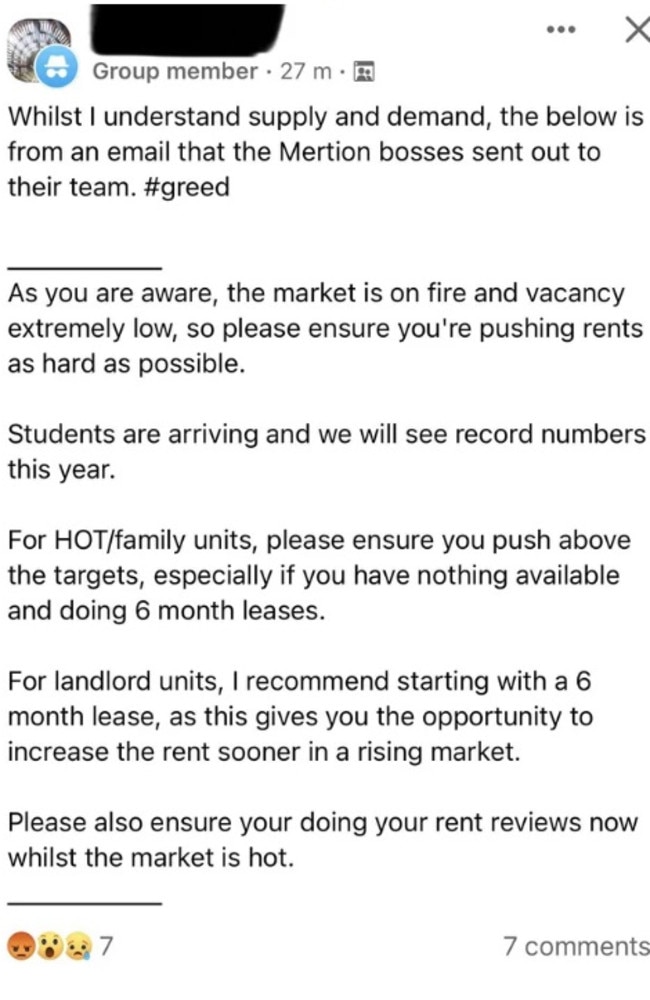 An employee shared a copy of what Meriton bosses emailed to staff. Picture: Reddit

An employee anonymously shared the email to a Sydney community group on Facebook and it was later shared to Reddit where it garnered an enormous response.

“Supply and demand aside, everyone knows how hard it is to get a rental right now and this is no doubt making the whole experience that much worse … greed is an understatement,” the person behind the Reddit post wrote.

A Meriton spokesperson has since denied having “greedy” practices and claimed if the company was greedy, it would be “unable to lease any of its own apartments”.

“Meriton manages 4250 properties on behalf of landlords and part of that service is to ensure landlords achieve ‘market rent’ for their property,” they told news.com.au.

“The rents are no greater than they were before Covid and of course the costs have gone up.

“Recent inflationary pressures have also impacted rent values but this seems to be exacerbated more so in Sydney where there is a chronic undersupply of apartments. 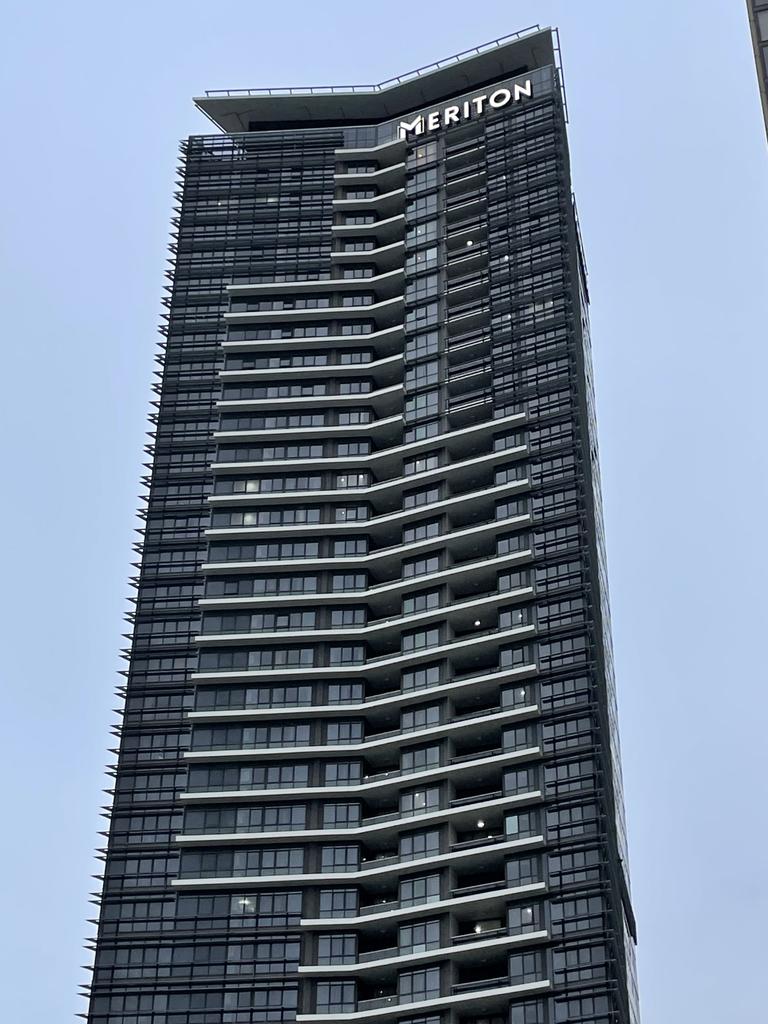 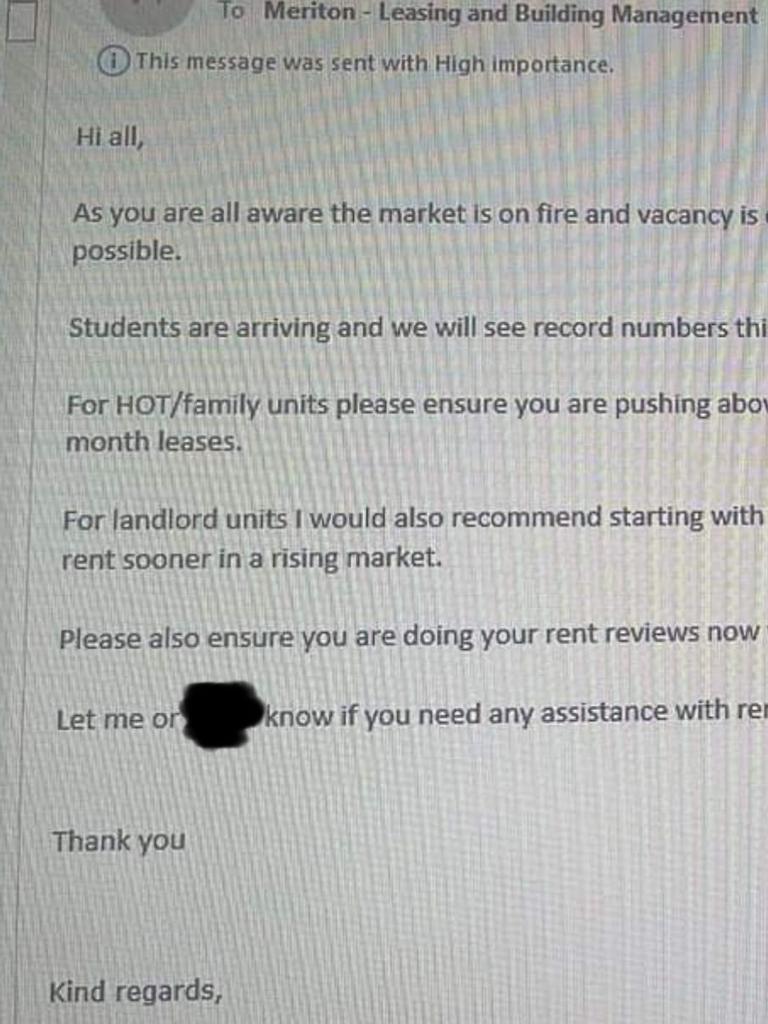 This photo was shared as ‘proof’ of the email. Picture: Reddit

“The banks are increasing interest rates rapidly, why are they not being called greedy?”

The spokesperson claimed Meriton was “doing more to keep rent increases at a stable pace” than many other companies and was “working hard” to meet Australia’s housing demands.

Still, their tactics have been described as “pretty low” given the well-documented cost of living crisis and major rental shortages.

“Everyone is doing it tough at the moment in the current climate, especially renters but on the other side of the coin, some owners/investors are struggling with interest rate rise so I get that.

“I just feel that these tactics to raise rents me are pretty low and it seems like there is no protection for tenants,” the person behind the Reddit post said.

“I find it sickening that REAs are allowed to get away with tactics like this, they don’t sit right…”

There are fears more Aussies could be pushed into homelessness as the availability of private rentals remains low and waiting times for social housing stretches into the years, according to housing campaigners.

“It is the least affordable we’ve ever seen it: The rental market is at fever pitch and the social housing shortfall is growing all the time,” she told The Sydney Morning Herald.

“We’ve heard stories about people living in their cars for months at a time while they try and find a place that’s affordable. So this is absolutely a problem that’s getting worse, and the unavailability of social homes and the enormous waiting list is playing into it.”

Yet, 6600 affordable homes are set to be removed from the National Rental Affordability Scheme, which was introduced by the Labor government in 2008, including nearly 2500 from Queensland alone.

Other states lost homes from the scheme including 1350 in Victoria, 1100 from Western Australia, while NSW will see 605 properties gone.

The scheme gave property owners a subsidy of nearly $11,000 each year for 10 years if they rented out newly built dwellings at 20 per cent less than the market rate.

A rental affordability report released last year revealed 40 per cent of low-income households are experiencing rental stress, and are struggling to pay for food, heating and healthcare.

National Shelter CEO Emma Greenhalgh said the nation’s social and economic wellbeing was at risk, with housing stress and homelessness increasing as the nation experiences a lack of affordable housing options.

“Rental increases mean individuals and families are forced to move away from family and friends driving disconnection at the same time they are struggling to find money to pay for essentials like food, utilities and healthcare.

“Key workers, including nurses and teachers often can’t afford to live in the communities they serve.”

The Federal Government will introduce its $10 billion Housing Australia Future Fund scheme this year, which will be used to build 30,000 new social and affordable homes in the fund’s first five years. However, campaigners have argued this falls far short of what is needed.