Renters in NSW could find it easier to have pets in their household under a major promise made ahead of the 2023 state election.

Opposition leader Chris Minns has vowed if Labor are elected on March 23, his government will make major changes to rules around why a landlord can decline a request for a renter to have a pet, and how long they have to make the decision.

Under the proposed new system, a generic pet request form will be made available, and owners of rental properties will have 21 days to make a decision.

If the application is denied, the landlord must provide a reason, with a list of prescribed reasons to be determined by a yet-to-be-established “Rental Commissioner”.

Applications that do not get a response in the allocated 21 days will be automatically approved.

“Refusing to allow pets as a blanket rule restricts a renters’ ability to find appropriate and affordable housing,” a statement from NSW Labor read.

“Renters compete for a limited number of pet friendly properties, making many of them unaffordable or difficult to acquire.”

The move is hoped to make leaving a domestic violence situation easier, and to reduce the number of pets abandoned or given up to shelters across the state.

Over Christmas, the RSPCA had more than 27,000 animals in its care, with rental restrictions cited as a key factor.

Sunday’s announcement builds on a comprehensive array of promises to renters from NSW Labor, with the party also vowing to reduce the number of reasons renters can be evicted and allowing bond payments to be transferred from one rental property to another.

Rent is expected to be a key issue ahead of the state election, with skyrocketing prices and low availability putting pressure on millions across the state.

Analysis of figures from the Australian Institute of Health and Welfare revealed there had been an increase of more than 10 per cent in the number of NSW residents seeking specialist homelessness support in 2021-22. 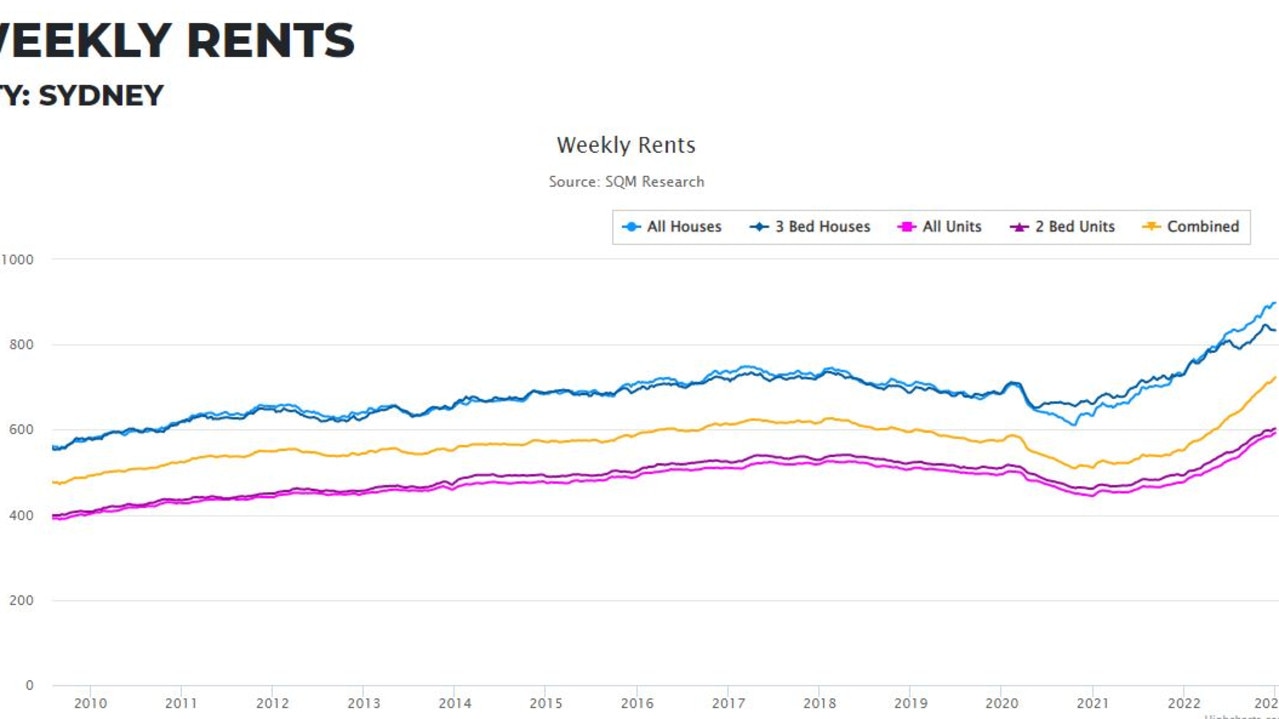 Data from SQM Research revealed the average cost of rent in Sydney had risen 23.2 per cent over the 12 months to January 4, with houses costing an average of $898 a week, and a unit $592. Picture: SQM research

Data from SQM Research revealed the average cost of rent in Sydney had risen 23.2 per cent over the 12 months to January 4, with houses costing an average of $898 a week, and a unit $592.

Sydney boasts the highest rental costs in the country, according to the research, which puts the average weekly cost of a house at $714 and a unit at $528.

In December, Liberal Premier Dominic Perrottet announced the practice of “rent bidding”, where real estate agents allowed prospective tenants to pay more in order to secure a rental property, would be banned in NSW.