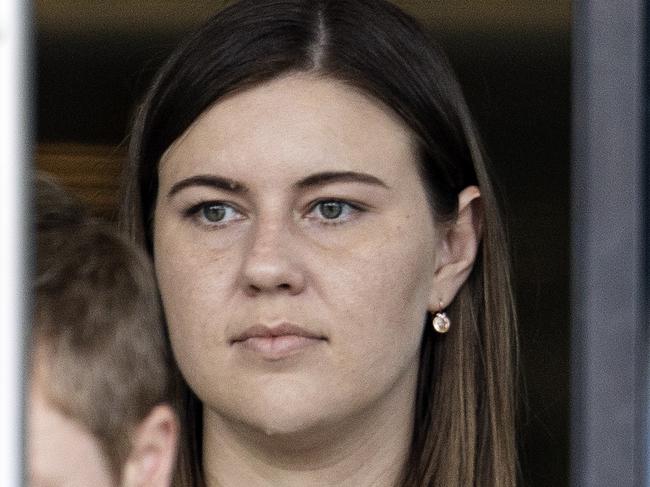 Key 45 minutes in parliament to be considered in rape case

A jury will be asked to consider the two separate accounts of a period spanning less than an hour inside Parliament House in the Bruce Lehrmann rape trial.

A forty-five minute period will be considered by a jury when they are asked to decide whether Bruce Lehrmann did or did not rape his former colleague Brittany Higgins.

Over the past two weeks, a jury has heard the differing accounts of how the window of time in the early hours of 23 March 2019 unfolded.

Mr Lehrmann is accused of raping Ms Higgins in Linda Reynolds’ ministerial office after a night out drinking with work colleagues.

He has pleaded not guilty to sexual intercourse without her consent and being reckless to her consent.

At the time, the two were colleagues inside of then defence industry Minister Linda Reynolds’ office.

An election nobody believed the Coalition would win was looming and Ms Higgins told the court the group who met at The Dock in Canberra were “lamenting” they would be all about to be unemployed in six weeks time.

In the witness stand, Ms Higgins recalled that she extended an invite to Mr Lehrmann because she wanted to improve their “adversarial” relationship.

The court heard he didn’t join the group at the crowded bar when they kicked off around 7:30pm.

Instead, the court was told Mr Lehrmann went to the Kingston Hotel with then Peter Dutton press secretary Austin Wenke for “steak and beer”.

Later, the pair walked to The Dock to join their colleagues for what Mr Lehrmann told police was a “defence event”

“I treated it as a parliamentary event … I wasn’t carrying on,” he said.

On their arrival, shown to the court on CCTV footage, Ms Higgins and friend Lauren Gain, joined the men at a separate table away from the group.

Over the course of the four and half hours at The Dock, Ms Higgins said she drank around 10 or 11 drinks. Mr Lehrmann told police he purchased at least two rounds.

“I was not intoxicated at all,” he said.

As the night wound down the four kicked the evening on to 88mph, a nightclub in Canberra’s centre. Mr Lehrmann told police he recommended the venue for a “boogie” because he “really enjoyed 80s music”.

In her own police interview, Ms Higgins said she remembered drinking shots at the club, and was probably “as drunk as I’ve ever been in my life” as she couldn’t recall much else.

It was here, where Mr Lehrmann said in his police interview it was “possible” the pair could have engaged in what the police described as “intimate behaviour”.

Around 1:30am, Ms Higgins and Mr Lehrmann shared an Uber. From here, their accounts of the evening differ.

In his police interview, Mr Lehrmann said he had purposely left his keys on his desk at Parliament House before going out. He had also remembered he had to “attend the office to do some work” while at The Dock earlier that evening.

He said that Ms Higgins also indicated she needed to pop back into work and he was being a “gentleman” by offering to split the ride there.

But Ms Higgins told the court “there was no reason” for her to be there.

Neither had their security passes. Mr Lehrmann said Ms Higgins signed herself in. When shown the sign in sheet of the evening, she told police that wasn’t her handwriting.

CCTV footage played to the court showed Ms Higgins struggling to put her shoes back on.

Security guard Nikola Anderson gave evidence that she told Ms Higgins not to bother, so the former Liberal staffer walked beside Mr Lehrmann with her black heels in her hands.

Ms Higgins told the court she has “no recollection” of clearing security and walking through the ministerial wing to their office.

In interviews with police played in court, Ms Higgins said she remembered sitting on a window ledge looking over the Prime Minister’s courtyard.

From there she blacked out. Ms Higgins recalled waking up some time later to a pain in her thigh from Mr Lehrmann’s knee digging into her.

“I told him no. I told him to stop,” she said in the interview.

“I don’t know why, but it felt like it was going on for a while (and I) was an afterthought. I was suddenly there and it didn’t matter.”

She told the court could not remember whether Mr Lehrmann took her to the couch in the minister’s suite or if she went there herself.

Ms Higgins said he gave her a weird look after he “finished”. She also told the court that, after he left, she passed out and did not wake until a security guard performed a welfare check on Saturday morning.

Mr Lehrmann denies ever having sex with Ms Higgins.

“It simply didn’t happen,” he told police in an interview played to the jury.

In his account, after the pair entered the office, Mr Lehrmann turned left to his desk and didn’t see Ms Higgins again.

He said she had walked into Senator Reynolds office and he assumed from there she had gone to her desk.

“I got what I needed for the weekend. I also attended to some question time folders,” Mr Lehrmann said.

After that, he told police, he had exited out the back door, which was closest to his desk, and called an Uber, and did not check on the whereabouts of Ms Higgins.

Around 2:33am, Mr Lehrmann could be seen on CCTV footage flinging his temporary security pass at guard Mark Fairweather on his way out.

A minute later, his Uber arrived and drove him home.

Next week, the Crown will close its case in court, with the defence expected to close fairly soon after.

The jury will be slimmed down from 16 to 12. From there, deliberations on whether there is enough evidence to find Mr Lehrmann guilty will begin.