Two men on a jet ski have been blasted for their actions after video footage showed them “chasing” a pod of dolphins.

On Thursday, marine photographer Jessica Beckham took to Instagram to share footage of the two driving their jet ski on top of a pod of dolphins in Victoria’s Mornington Peninsula.

“I’ve spent over twenty years out on Port Phillip Bay and this problem is not getting better, it is a hundred times worse and nothing is being done.

“These guys on their jetski were relentless this afternoon driving back and forth over dolphins.”

Ms Beckham urged viewers of the video to report the behaviour to the Department of Energy, Environment and Climate Action (DEECA).

Regulations require jet skiers to remain 300m away, and boats 100m away, from dolphins when in the water. 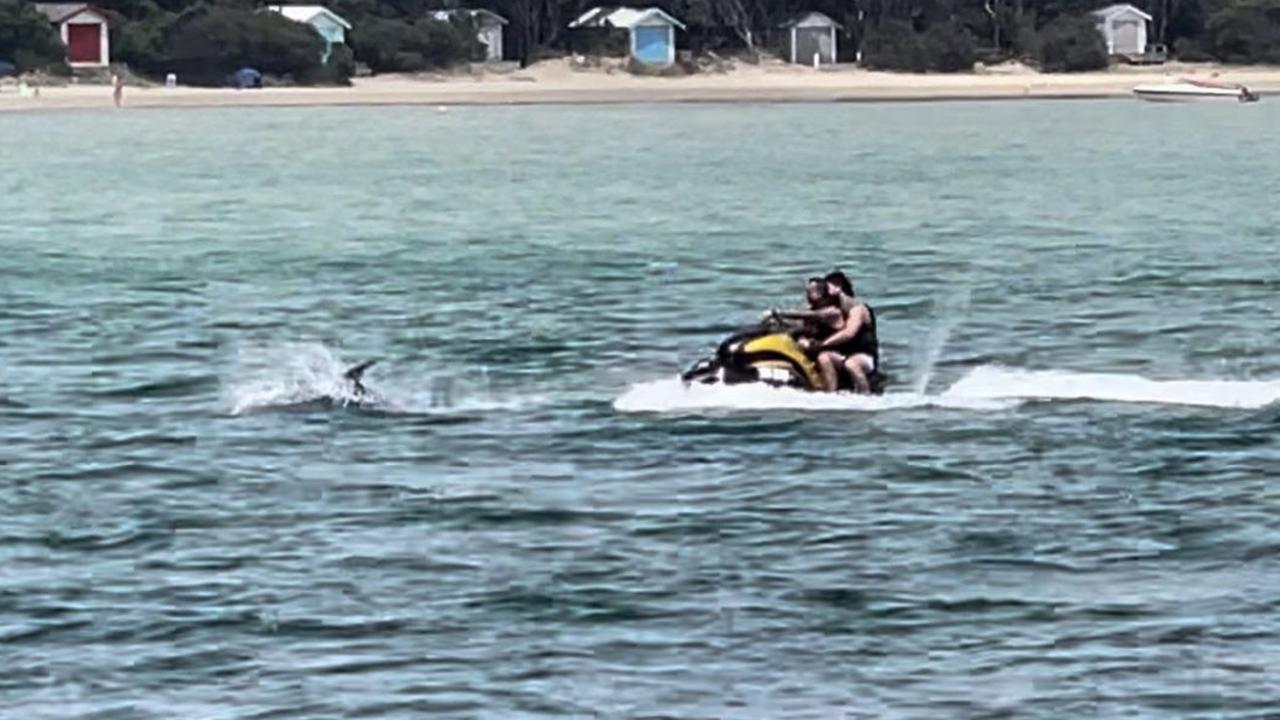 Two men on a jet ski have been blasted online after a video showed them ‘chasing’ dolphins. Picture: Jessica Beckham/Instagram

“The speed and erratic behaviour of jet skis on this stretch of beach, which is so important to these critically endangered dolphins, is outrageous,” she said.

“We have regulations in place to protect our marine wildlife, but who is enforcing it?

“When will DEECA do something to protect our marine wildlife?”

Commenters condemned the actions of the jet skiers, saying the problem was getting “out of control”.

“These riders are breaking the law and a danger to beachgoers. This has been the worst I’ve witnessed in 30 years,” one person said.

“This is outrageous and it will also be outrageous if nothing is done about it,” said another.

“They look like they don’t even know what they are doing is wrong … it’s too easy to get a boat/jet ski licence.” 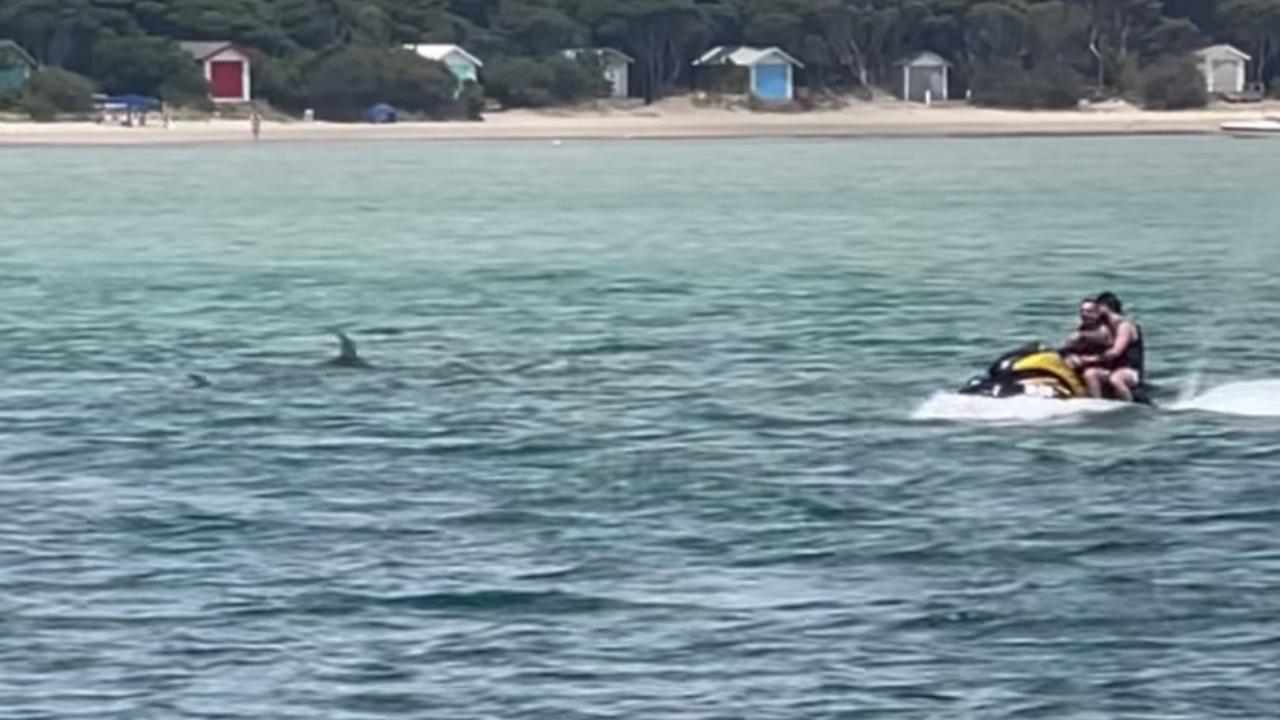 The men were filmed very close to the dolphin pod. Picture: Jessica Beckham/Instagram

In a statement, DEECA told NCA NewsWire that members of the public were urged to report wildlife crime to Crime Stoppers on 1800 333 000.

They said anyone caught within 100m of a dolphin risked receiving a fine of up to $3698 under the Wildlife Act 1975.

“If a dolphin approaches a boat or jet ski, slow down or stop the vessel and let the dolphins move on,” DEECA said in the statement.

“Harassing dolphins and other wildlife is cruel and unacceptable, and we urge the public to report this behaviour to Crime Stoppers on 1800 333 000,” Ms Donaldson said. 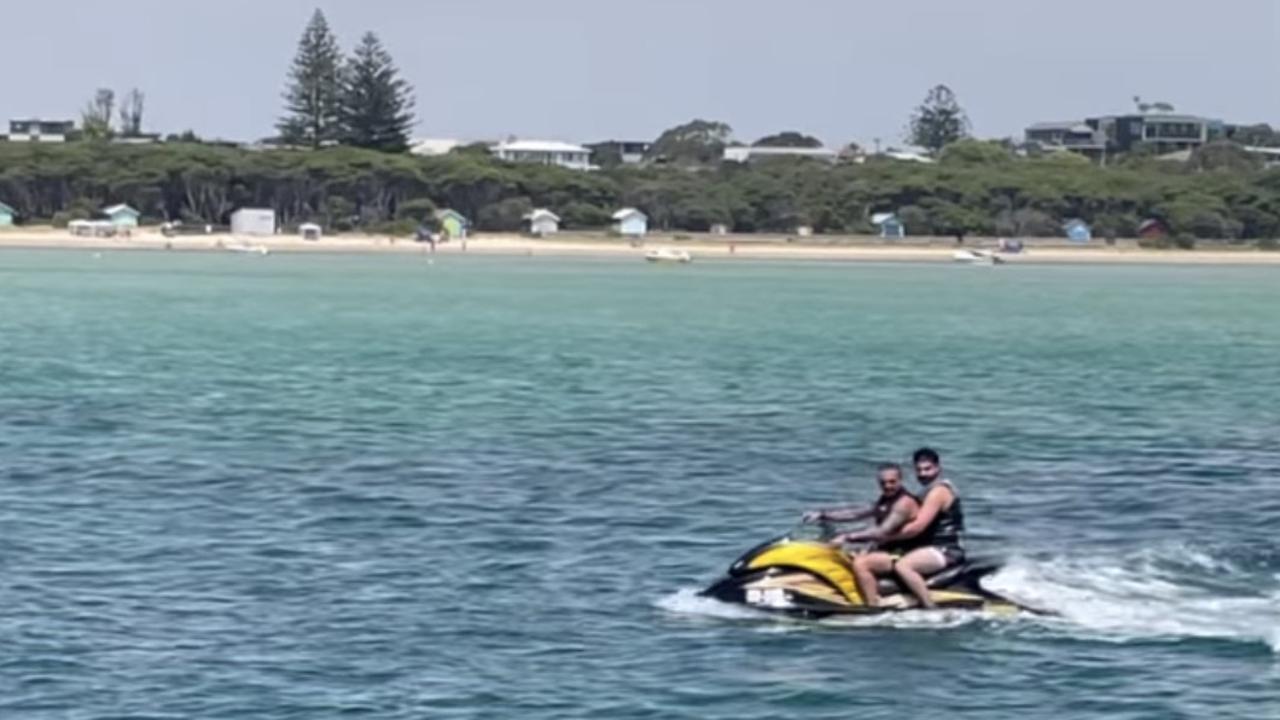 People who see others doing the wrong thing are urged to report them through Crime Stoppers. Picture: Jessica Beckham/Instagram

“Small changes to your behaviour can make a big difference to wildlife welfare. Our patrols are focusing on engaging with the public to make sure they know the rules, and anyone caught doing the wrong thing is held accountable.”

“We’re lucky to have iconic wildlife species living along the coast and we want beachgoers to safely share the beach with them.”