A five-year-old boy has had a terrifying run-in with a python, with the snake attacking him and dragging him into his family’s pool.

Little Beau was playing around the pool with his brother at his family’s Byron Bay home when he was set upon by a three-metre python that was lurking in the garden.

The boy’s father, Ben Blake, told Melbourne radio station 3AW of his horror at seeing the incident unfold on Thursday.

“Beau was swimming with his brother yesterday and just out of the blue probably a three metre python decided to wrap his mouth around his Achilles, his ankle,” Mr Blake said.

“They both rolled into the pool and the python wrapped himself around him.”

The dad said there was a garden at the edge of the pool and Beau was walking past the foliage when the snake struck.

Mr Blake said he believed the python was laying in wait for a “victim” to come along, such as a bird, but instead attacked his son.

The python dragged the young boy into the pool. Picture: 3AW/Supplied

The snake bit the young boy on his ankle before wrapping its body around his leg and causing them both to fall into the water.

“It was instant. I saw a big black shadow come out of the bush and before they hit the bottom it was completely wrapped around his leg,” he said.

Beau’s grandfather, Allan, 76, was the first person to react to the situation, jumping in the pool after the boy.

Mr Blake said his father was in the water “before I even had the chance to even contemplate getting in the pool”.

“He passed him up to me and then I had to separate the two, release him from his legs,” he explained.

It took Beau’s father about 20 seconds to separate the boy from the snake, with Mr Blake branding it “somewhat of an ordeal”.

He told 3AW it wasn’t uncommon to see snakes where they live, but having one so close to the house was unusual.

“It is Australia, they are about. But a big python like that lurking in the bushes right next to the pool, not so much,” he said.

Thankfully, Beau is doing well, with Mr Blake saying the boy calmed down once they were able to clean up the blood and tell him “he wasn’t going to die because it wasn’t a poisonous snake”.

“He is actually pretty good,” he said. 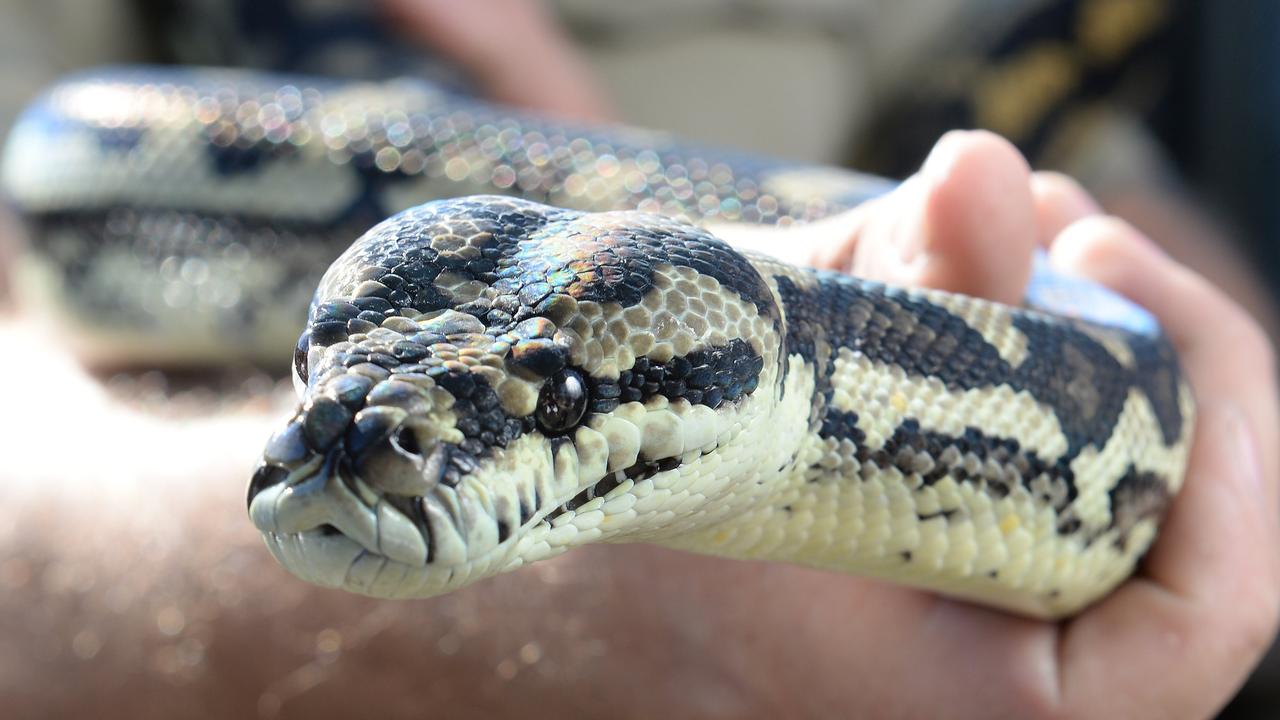 The boy’s father was able to remove the snake and release it back into the wild.

Mr Blake said Beau would be having a few days off school so the family could monitor the bite and make sure it didn’t get infected.

As for the snake, the dad released the reptile, only for it to come straight back.

“I held on to him for probably 10 minutes while I was trying to calm my dad down, his partner down and my two boys,” Mr Blake said.

“Then I released him and he went back to the scene of the crime the naughty thing.”

Last month, experts issued an “urgent warning” to watch out for venomous snakes in NSW with the recent weather creating the “perfect environment” for the dangerous creatures.

The Australian Reptile Park said snake sightings in the state had increased due to heavy rains and temperatures warming up.

“The unusual amount of rain we’ve had means we could be in for a massive snake season,” head reptile keeper Jake Meney said.

“When it rains the activity of small mammals, other reptiles and birds can increase and this means snakes will likely be more active and on the hunt for food.

“The increase in temperature will also see snakes out and about looking for a mate as breeding season ramps up.”