Four words echoed through the trial of Justin John Meale – coming right from the mouth of his own barrister – as he fought to clear his name for the murder of Clinton Pollock on Father’s Day in 2018.

Ironically, all four played a role the fateful night the 35-year-old was gunned down in what was called a “ridiculous Mexican standoff” on his Deception Bay front yard.

Meale, 31, was jailed for life after a jury found him guilty of murdering Pollock in the resort town, about 30km north of Brisbane.

It took them less than an hour to reach a verdict after the week-long trial. 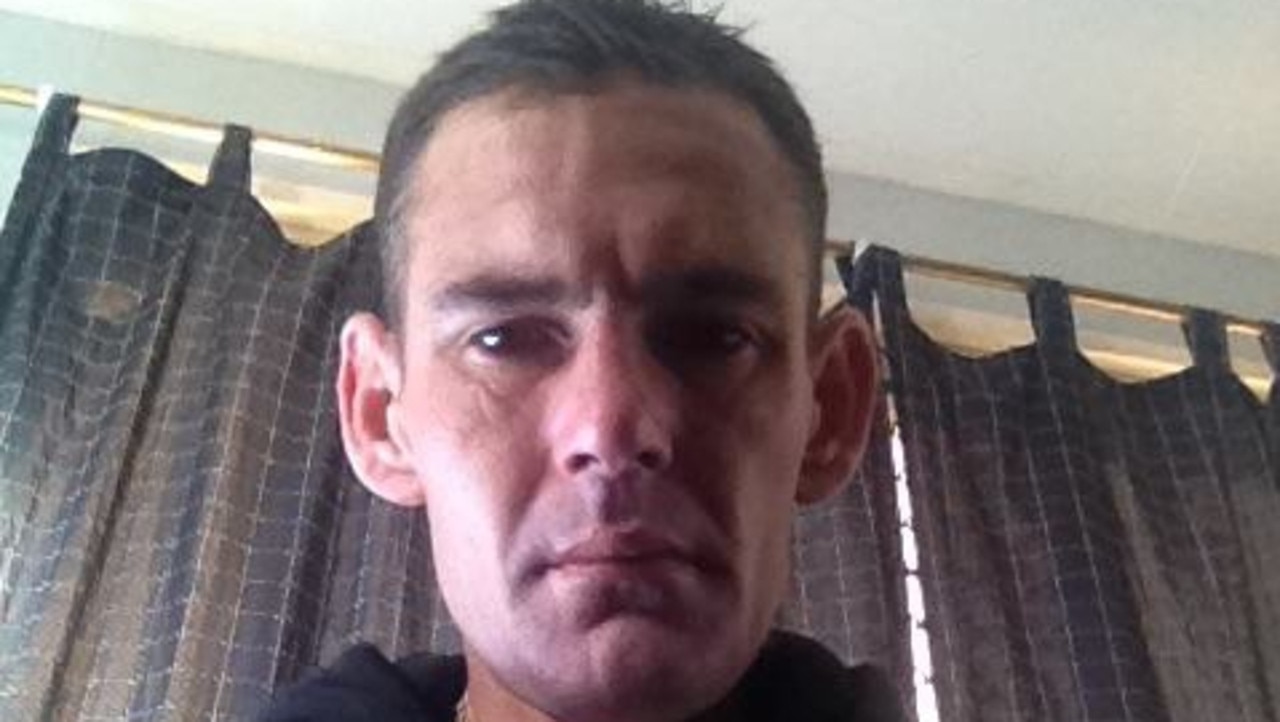 Clinton ‘Rocky’ Pollock was murdered outside his Deception Bay home on Father’s Day 2018.

Text messages between the pair were read out to the jury at Brisbane Supreme Court, revealing the escalating tensions between them as Mr Pollock demanded his share of a deal they had struck before threatening to spray Meale’s house with bullets.

Mr Pollock was known to many as “Rocky” – not in the likeness of the anthropomorphic cartoon squirrel of Rocky and Bullwinkle fame but the gritty, ruthless fighter a la Rocky Balboa.

He had a propensity for violence, access to weapons and didn’t shy away from confrontations. He was someone you never wanted to cross, the jury was told.

Meale and Mr Pollock had a deal: a small quantity of the drug ice in exchange for a handful of .22 calibre bullets. They used a middleman to facilitate the transaction, knowing he would be able to source the drugs.

But when Mr Pollock did not get his methylamphetamine, he got mad. 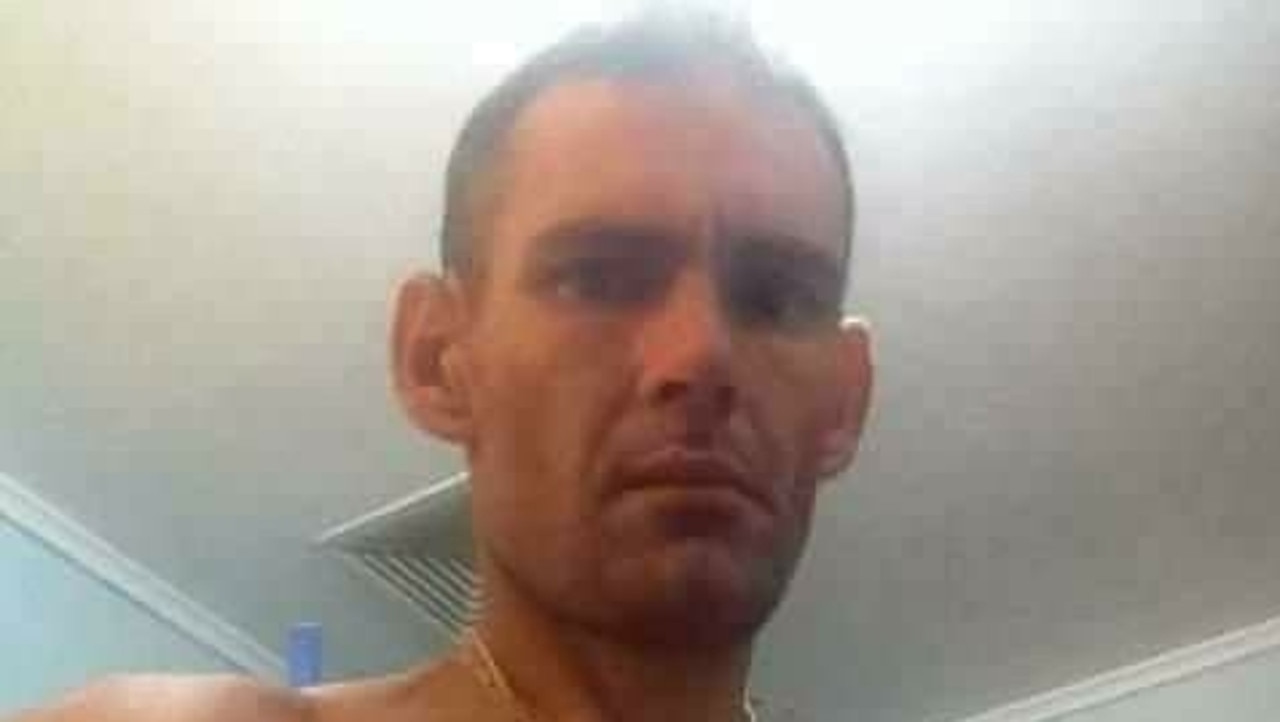 Pollock had a tendency for violence.

Texts on his phone, revealed to the Supreme Court jury, captured the violent threats that sparked the deadly confrontation.

“You think that little toy (is going) to scare me, I’ll spray your house up …

Meale responded with: “F–k off, leave me alone c–t or I’ll f—ing find you.” 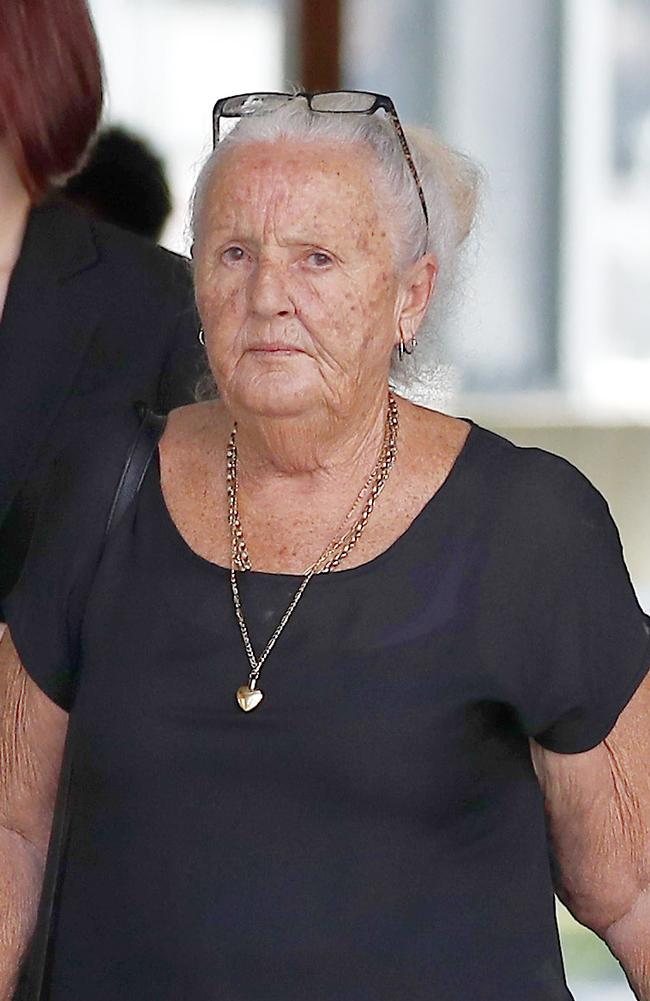 Mr Pollock didn’t let up in his abuse, firing back multiple messages through the afternoon and continuing into the night.

“I’ll show you how I’ll treat a goose if you keep trying to f–k ‘bra,” he messaged Meale.

“You said you could ring someone, now to get on if (it’s) one minute later than 4 o’clock you’ll be seeing me and my brother … so don’t f–k with me.”

Neither man tried to de-escalate the scenario: Meale responded by saying he would kill anyone who “f–ks” with his family.

Mr Pollock in turn hit back: “I ain’t none b—h either so I mean it, if you don’t want me to come there and play up that little toy you got not (going to) stop me, let me tell you, you got one bullet … in the chamber, I got 15 so don’t go mouthing off to me you goose.

“I need just what’s owed to me and it better be big shards and right on 4 o’clock,” he continued

The jury was told Meale eventually went over to Mr Pollock’s house with three other men, carrying his sawn-off rifle and standing at the gate.

Mr Pollock, who appeared twitchy and had a hand in his pocket, met Meale outside. The jury was told Meale believed Pollock (pictured) was armed with a weapon and had ‘twitchy’ movements when the confrontation unfolded at his home.

The confrontation was described as something like a “Mexican standoff” before Meale – fearing Mr Pollock was carrying a semiautomatic weapon and was ready to strike – shot Mr Pollock in the chest.

He would later die from the fatal wound.

Meale’s defence barrister Greg McGuire had urged the jury to consider the possibility of manslaughter if they were not satisfied his client intended to kill Mr Pollock or cause him grievous bodily harm.

He argued his client believed Mr Pollock was going to shoot him, as he indicated in the texts. Meale, therefore, acted out of fear to “get him first”.

“He (Meale) had a gun, he had every reason to believe this other lunatic had a bigger gun,” Mr McGuire said.

“They got to this ridiculous Mexican standoff; he thought he was going to be shot, so he shot him (Mr Pollock). Insane as that is, that’s what’s happened.

“He didn’t bring a gun to a robbery or to burgle someone’s home, he brought a gun to stand up to someone, plain and simple.

“Something happened that to a normal, sane, sober person was every chance of happening … the bullet didn’t go where it was intended. 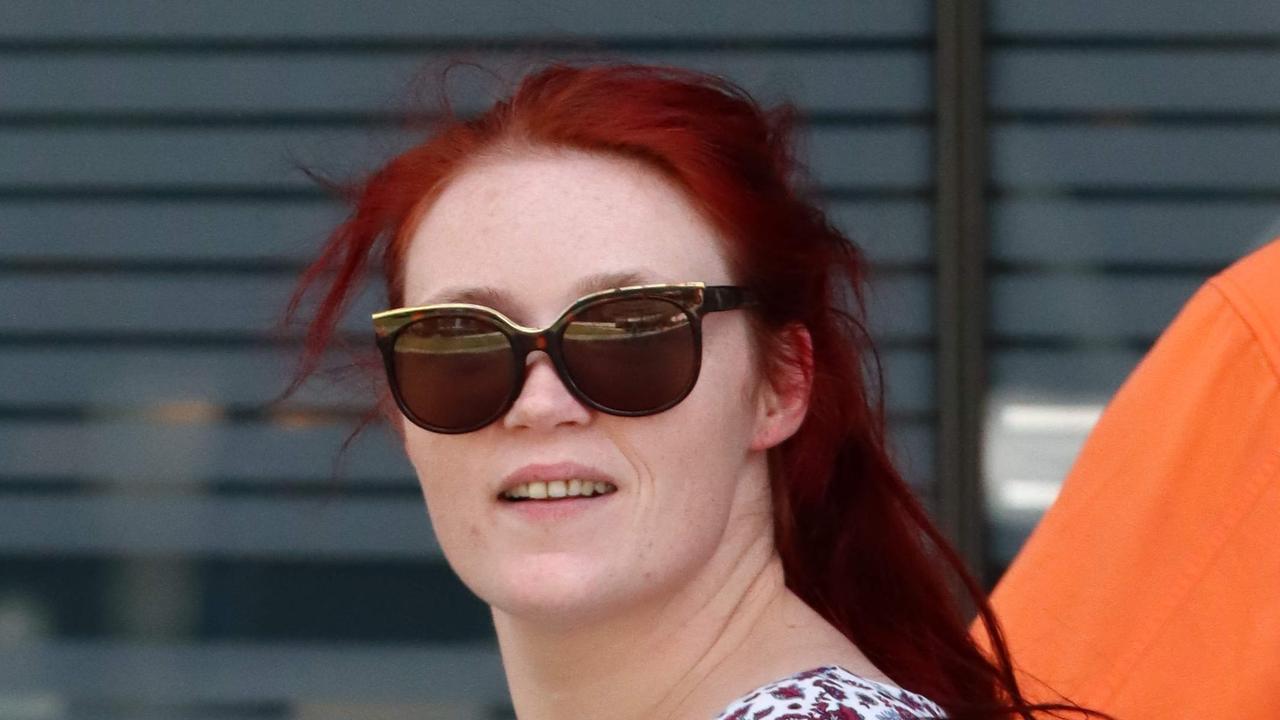 Justin Meale’s ex-girlfriend Tayla Mitchel gave evidence she heard her then partner get into a heated argument with ‘someone called Rocky’ before the shooting took place. Picture: NCA NewsWire / David Clark

She said she overheard her then boyfriend in a heated argument with someone called “Rocky” when she came around on September 2, 2018.

Ms Mitchell – who is not accused of any wrongdoing – said she saw Meale with a gun “a couple of days before” and on the day of the shooting.

Christian Sands, one of the four men who arrived at the Deception Bay home with Meale, said he ran from the street after the gun went off.

“There was a flash, bang, he started screaming and I ran,” Mr Sands said.

“I didn’t see the gun go off, but I saw the flash and I saw Justin with the gun after.”

Sands admitted to being an accessory after the fact to a malicious act with intent in 2019 and was sentenced to three years behind bars, suspended after six months. 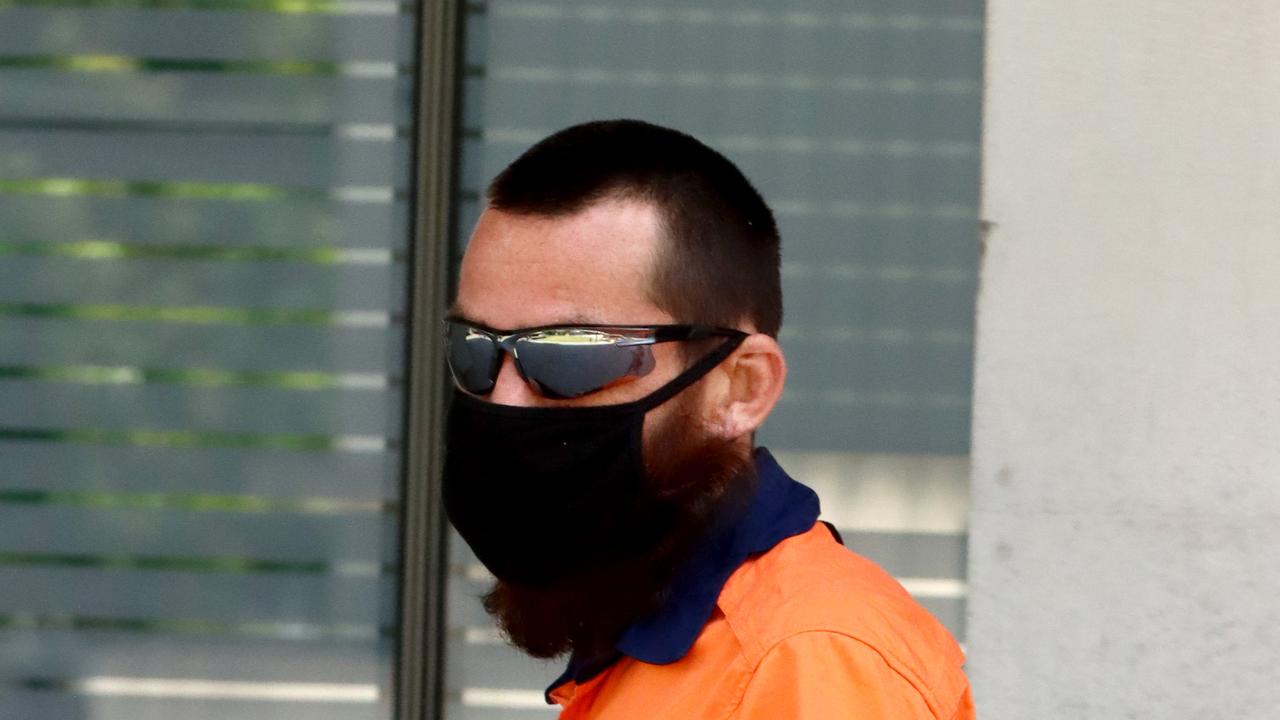 Christian Sands, one of the men who attended Mr Pollock’s home with Meale, said he heard a bang and saw a flash during the confrontation. Picture: NCA NewsWire / David Clark

In lengthy interviews with detectives, Meale initially denied having anything to do with Mr Pollock’s murder and insisted he went home after an initial visit to the 35-year-old’s house.

He then changed his tune.

Meale insisted he “reacted” to Mr Pollock’s movements when he broke the standoff.

CP: “Where’s my f—ing bullets? You think that little toy (is going) to scare me, I’ll spray your house up … (You’re) going to owe me more than you do now.”

CP: “Well you better just sort it ASAP ‘cause it wasn’t schmiddy. If you want to play, let’s play. But I don’t want it to come to that I want it to be fixed but a gram.

CP: “I’ll show you how I’ll treat a goose if you keep trying to f–k ‘bra. You said you could ring someone, now to get on if (it’s) one minute later than 4 o’clock you’ll be seeing me and my brother and I would be playing up more than you could imagine so don’t f–k with me.

JM: “Well I’m doing my best I hope it don’t come to that, but last time I deal with you. Just remember this my mum and dad’s home, my word will kill anyone who f–ks with them. And I will have it or you have the bullets back and I’ll play up bruv, so trust me I ain’t a b—h.

CP: “I ain’t none b—h either so I mean it, if you don’t want me to come there and play up that little toy you got not (going to) stop me, let me tell you, you got one bullet … in the chamber, I got 15 so don’t go mouthing off to me you goose. I need just what’s owed to me and it better be big shards and right on 4 o’clock.

CP: “Sweet as, long as you have my 8 points and hurry the f–k up, and you just bring it in, text me when you coming up my road and I’ll grab the dog so you don’t get bit.

*Texts based on audio recordings from Brisbane Supreme Court and subjected to edits for clarity.