Indigenous landholders are angry and disappointed with the federal government, saying they have not been consulted over a plan to reform protections for heritage sites.

She said new protections will be implemented for thousands of sites across the country.

There will also be an overhaul of how native title operates after the mining company blasted the 46,000 year-old site in May 2020 to expand an iron ore mine despite warnings from traditional owners.

The government on Thursday tabled a response to the Juukan Gorge report, accepting seven out of eight recommendations brought about by the parliamentary inquiry into the incident.

But the PKKP Aboriginal Corporation, which administers the traditional lands and waters on which the sacred rock shelters were destroyed, says it was not consulted. 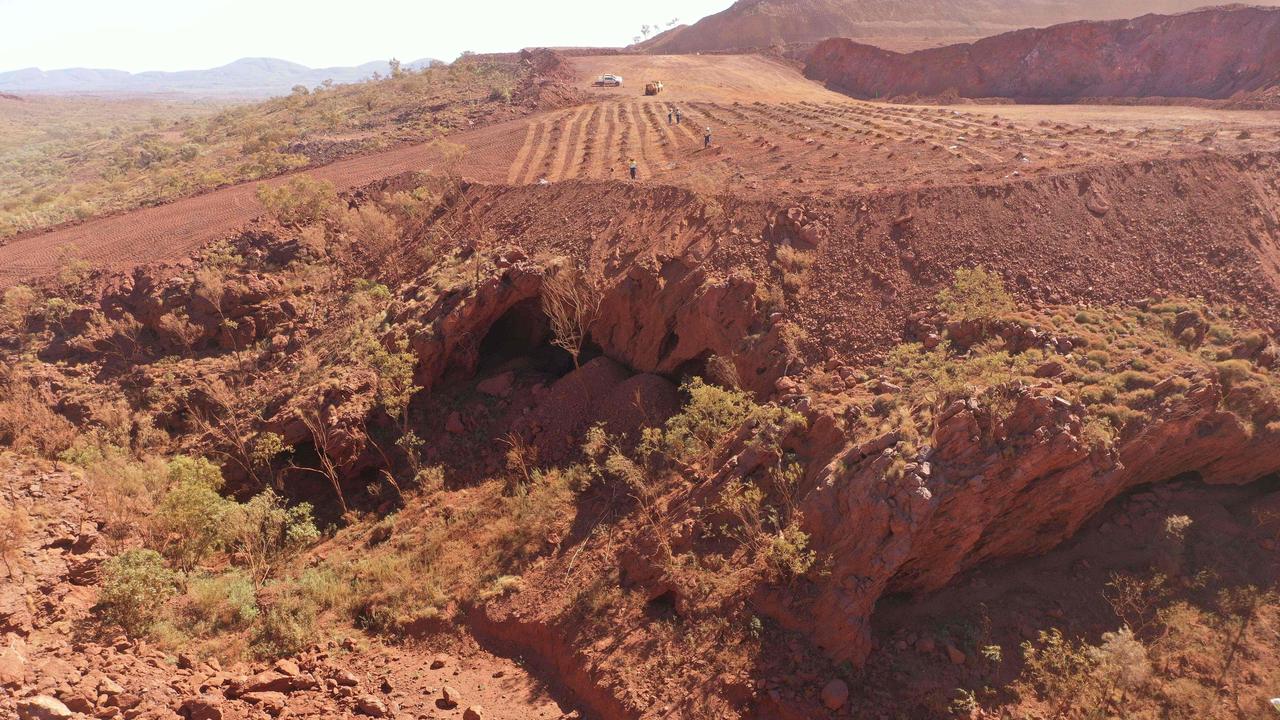 Juukan Gorge in Western Australia – one of the earliest known sites occupied by Aboriginals in Australia – was destroyed by Rio Tinto in 2020. Picture: PKKP Aboriginal Corporation / AFP

Chairman Burchell Hayes said when it came to the destruction of the Puutu Kunti Kurrama and Pinikura people’s cultural heritage, ultimately actions spoke louder than words.

“Everyone keeps telling us they are sorry about it, but actions speak louder than words,” he said.

“It seems like a media event in Canberra is more important than giving PKKP people the respect of asking us what can be done to try and stop something like the destruction of the Juukan rock shelters happening again or even letting us know what the government is planning.”

A spokesperson for Ms Plibersek said the minister had attempted to engage with the PKKP four times this week, and her office had spoken to the organisation’s cultural heritage manager.

“A meeting between the CEO and the minister was also offered,” the spokesperson said.

Ms Plibersek said under the laws of the time, the destruction of the sacred rock shelters in the Pilbara was legal – and that needed to be changed.

She said one of the clear findings of the two inquiries into the gorge’s destruction was that it wasn’t a one-off incident, and there were significant flaws in the laws protecting Aboriginal culture.

“It was completely wrong, but it shows how weak our laws are,” she told ABC Radio.

“There’s absolutely a sense of urgency to ensure that this sort of cultural heritage destruction doesn’t happen again.

“But a very strong message from the First Nations Heritage Protection Alliance is also that they genuinely want to sit at the table and work through these issues in partnership and co-operation.

“So we’ve got to balance the urgency with really thorough and thoughtful consultation with First Nations people around Australia so that it is a genuine co-design process.”

Ms Plibersek said she was unable to “put a timeline” on when the enhanced protections might come into law, noting the complexities of the issue.

“The Attorney-General has also said that there are areas of the Native Title Act that he would like to examine in more detail in the future,” she said.

The government has agreed to pass all recommendations bar one – whether ultimate responsibility for cultural heritage protection should sit with the Indigenous Affairs Minister or the Environment Minister – that is still being determined.