Australia is facing the “challenge” of an ageing population, as the proportion of Australians over the age of 65 grows so does the burden on younger workers.

The proportion of people aged over 65 has doubled in the past 70 years, a trend that‘s set to accelerate according to the Treasury’s latest Annual Population Statement. 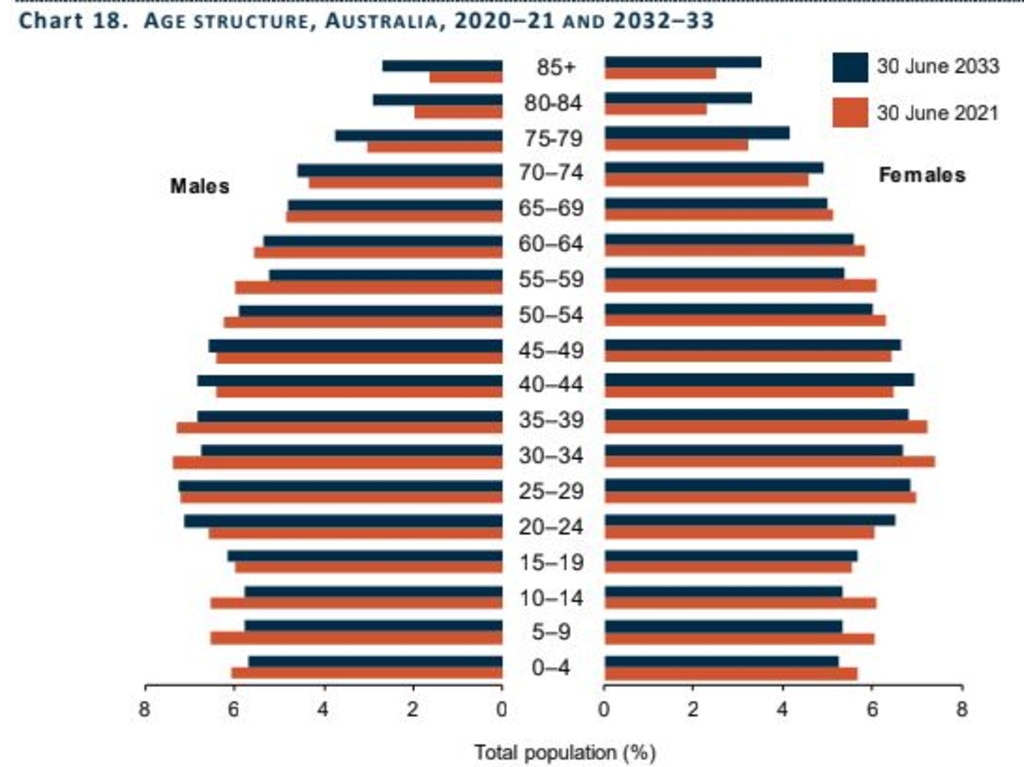 As time goes on, the population will skew older.

The ageing population is driven by increasing life expectancies and falling fertility rates, with the wave of older Australians created by a large baby boomer generation.

As the proportion of older Australians increases, so does the cost to the budget and the tax burden on the working population according to Melbourne University demographics professor Peter McDonald.

“We need to be concerned about it, because the wave is coming, the baby boomer generation is not that far away,” he said.

“The issue there is that older people, particularly people aged 80 and over, is where the growth of population will be very big.

“The baby boomer generation is coming into those ages, and the population over 80 tend to be relatively expensive in terms of health care, residential aged care and so on.

More needs to be done to ensure that there are the staff to care for an ageing population. Picture: NCA NewsWire / Andrew Henshaw

Professor McDonald says that future governments need to make sure they are prepared for the explosion in costs.

“We have to be prepared for that, we see at the moment in aged care, for example, big labour supply problems,” he said.

“There is a supply problem now but it’s going to get a whole lot bigger when the baby boomer generation gets to those very older ages, so we need to be planning for that.”

Governments need to make sure that they’re ensuring that migration levels remain high enough to bring down the ageing population.

“What migration does and the good thing about it is to concentrate the population as far as possible in the working ages, that is in the ages that pay tax,” Professor McDonald says.

The current as well as future governments need to ensure they are prepared for the baby boomer wave, which includes ensuring migration remains high enough. Picture: NCA NewsWire / Flavio Brancaleone/POOL via NCA NewsWire

The higher the level of migration, the lower the median age will become.

Most migrants arrive in Australia between the ages of 15 and 34, according to the annual report.

Professor McDonald doesn’t recommend increasing the number of migrants from around 235,000 per year.

“I think around 200,000 per year is good, if a huge number is coming in, for example, if you double it at 400,000, then you’ve got enormous infrastructure and absorption problems, you can’t deal with that number,” he said.