Record-breaking floods have inundated the Kimberley Region in Western Australia as flood warnings remain in place in almost every state.

Here is what the weather is looking like in each state.

Floodwaters have inundated the homes of around 1,200 Fitzroy Crossing residents with residents being flown to Broome.

The Fitzroy River is expected to peak at 15.7m – exceeding flood records by almost 2 metres.

The Albanese government has approved a request for Australian Defence Force aircraft and personnel to help evacuate residents from Fitzroy Crossing and nearby areas.

Ex-Tropical Cyclone Ellie continues to wreck havoc east of Broome with heavy rain totals forecast for the region into Thursday.

“People in the north of WA experience these types of weather conditions at this time of year but the extended nature of this event and associated flooding is unusual and dangerous,” a spokesman for the Bureau of Meteorology said. In the Dampier Peninsula, up to 250mm could fall in the next 24 hours.

Damaging winds are averaging speeds of up to 70km/h with peak gust of around 100km/h occurring at Cape Leveque including Broome until late Thursday morning.

Ex-Tropical Cyclone Ellie is expected to finally move steadily to the east on Friday.

Upstream floodwaters are prolonging flooding along the Murray River which are expected to stick around until mid-to-late January.

A moderate flood warning is in place at Mildura and Wentworth.

Edward River at Moulamein fell below the minor flood level of 4.6m on Tuesday morning and is currently falling.

A moist unstable air mass has triggered severe thunderstorms on Wednesday afternoon across parts of NSW.

As of 2.30pm, the Bureau of Meteorology warns that severe thunderstorms were detected on the weather radar near Bilpin, Colo Heights and Badgerys Creek.

These thunderstorms are moving towards the south and are forecast to affect Camden, Campbelltown and Picton by 3:00pm and Richmond Penrith and Appin by 3:30pm. 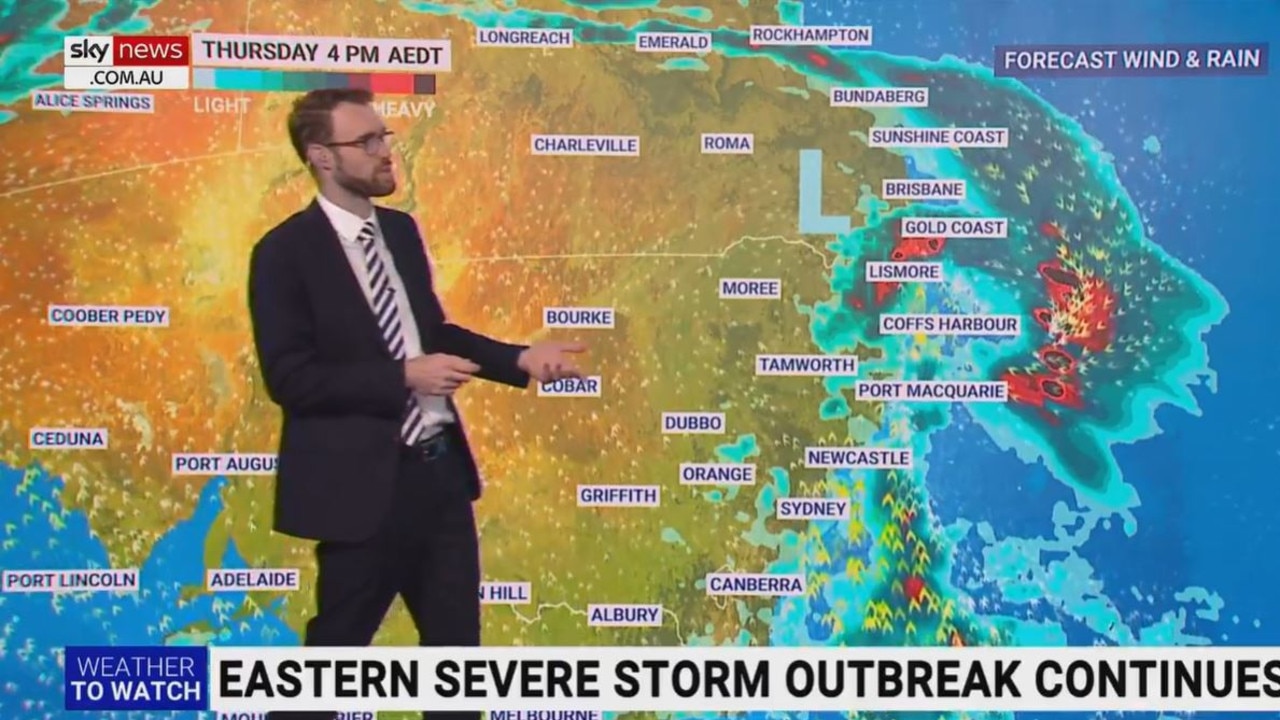 Severe thunderstorms are forecast for parts of NSW on Wednesday and into the rest of the week. Picture: Sky News 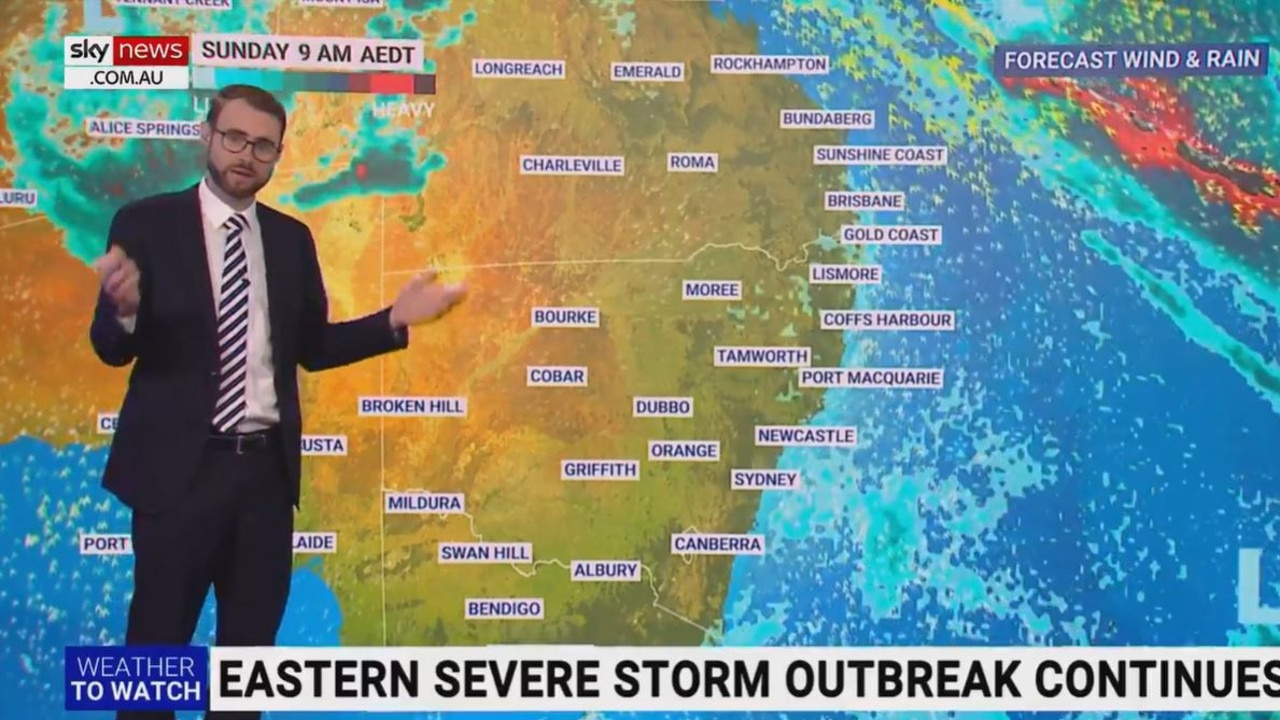 The wet weather is expected to ease by Sunday morning. Picture: Sky News

Major flooding is occurring at Menindee, where river levels are currently steady near 10.20 metres.

A moderate flood warning remains in place along the Lachlan River at Hillston and the lower Murrumbidgee River at Balranald.

Ten flood warnings remain in place in South Australia after they were issued last Friday.

Despite this the weather has cleared over Adelaide where cloudy but warm conditions will stick around to the end of the week.

The sun is expected to come out by Friday, when temperatures in the high thirties stay for the weekend.

Cloudy conditions are constant in the southern state for the rest of the week.

Severe thunderstorms were detected on the weather radar near Bilpin, Colo Heights and Badgerys Creek.

Damaging winds, large hailstones and heavy rainfall are expected and may lead to flash flooding are likely.

Queensland is experiencing a drenching this week as the remnants of Ex-Tropical Cyclone Ellie cover most of the state. A severe thunderstorms has benne issued for the Southern Coast district on Wednesday afternoon.

It is likely to produce damaging winds, large hailstones and heavy rainfall that may lead to flash flooding over the next several hours.

Locations which may be affected include Beaudesert, Boonah and Springbrook. 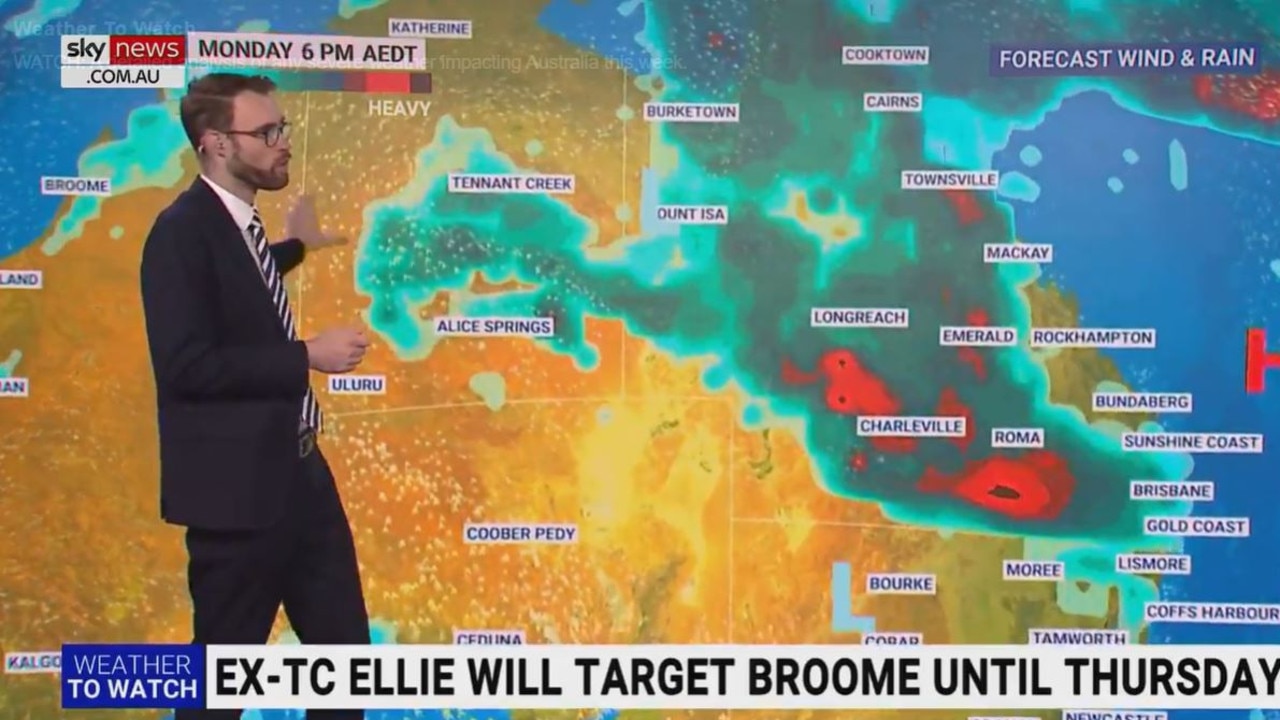 Wet weather will linger over QLD until next Monday. Picture: Sky News

The Northern Territory is still covered in a massive band of rain left behind by Ex-Tropical Cyclone.

It’s a wet and steamy day in Darwin on Wednesday, with up to 35mm of rain expected to fall on the northern capital.