What was meant to be the best day of their lives has been permanently tarnished for Queensland newlyweds Natasha and Ryan, who may never see the only photos taken on their wedding day.

They paid Flawless Photography, operated by Rikky-Leigh Johnson, $500 to capture special moments for three hours of their big day on August 13, but three months on still have nothing to show for it.

The pair became locked in an ugly feud with Ms Johnson in the weeks that followed their wedding, during which they said their previously close relationship with her “completely changed”.

“It was like she didn’t care anymore,” Natasha, who only wished to share her first name, told news.com.au. 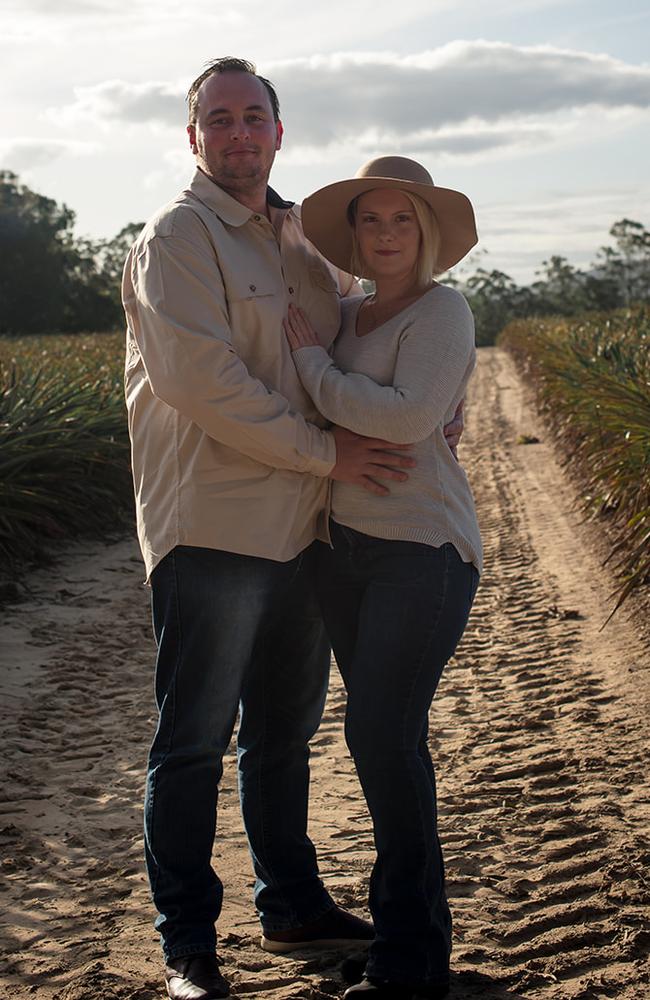 Natasha and Ryan (pictured in engagement shoot) say they were ripped off by their wedding photographer. Picture: Nadine B Collective

Natasha and Ryan wanted guests to experience their ceremony fully so asked that phones not be used – a request they now wished they could go back on.

“We asked the celebrant to tell everybody to turn their phones off,” Ryan said.

“But now we don’t even have backup photos from the guests,” Natasha added.

“She’s upset me to a point where I don’t even like talking about my wedding anymore.”

Natasha and Ms Johnson in the lead-up to the wedding struck up what the bride thought was a close friendship. 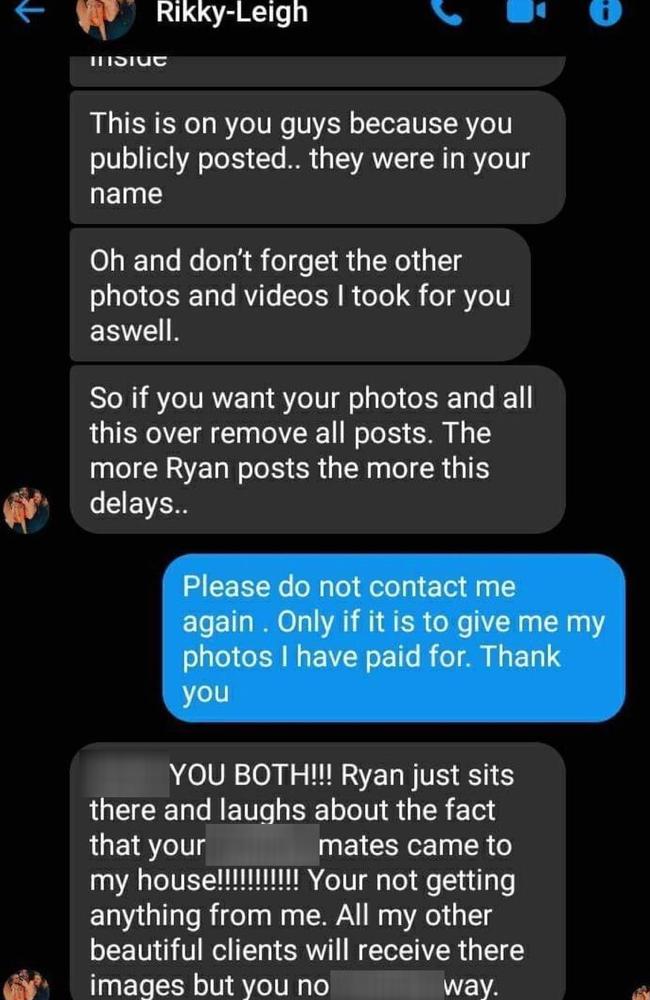 Ms Johnson agreed to MC the couple’s reception as a favour to them, and also did a morning shoot of the bride getting ready for free.

Since the relationship soured however, Ms Johnson demanded she be paid $500 for the work she originally agreed to do “as a friend”.

Red flags initially slowly appeared as the wedding drew closer, when the couple claim Ms Johnson didn’t show up to meetings arranged to discuss the style of photos she would be taking.

They eventually had a 30 minute phone call a few days before the wedding, during which Ms Johnson ensured Natasha she would have no trouble capturing photos in her preferred style.

When the day arrived however, the couple grew concerned.

“She was a bit all over the place, she didn’t allocate her time correctly,” Natasha said.

The couple say Ms Johnson didn’t begin taking photos of the couple until there was only 20 minutes left of the three hours they hired her for.

Afterwards, she sent the couple a few “rough” photos and pledged she would have the rest ready to hand over in the coming eight to 10 weeks, and 14 weeks at the most.

When the 14 weeks passed and still the couple had nothing, they pressed her to find out why – a move that seemed to enrage Ms Johnson beyond what they could have ever expected.

“It was excuse after excuse, then she turned nasty and said she gave me a really low rate and I shouldn’t be so bossy and rude asking for my photos all the time,” Natasha said.

After posting an unflattering review of the business to a local Facebook page, the couple began receiving messages from Ms Johnson.

“Well thankyou for posting everything else publicly …. Shows what kind of people you are!!!! Expect some people to turn up to your house and return the favour!!!” a message sent by Ms Johnson’s phone, shared with news.com.au, read.

When couple Natasha and Ryan hired their ‘friend’ to be part of their wedding day, they could never have imagined how much they would come to regret it.

Facebook messages sent to Natasha had a similar theme.

“This is on you guys because you publicly posted … they were in your name,” one read.

“Oh and don’t forget the other photos and videos I took for you as well.

“So if you want your photos and all this over remove all posts. The more Ryan posts the more this delays.”

Ms Johnson was further upset when asked by Natasha to stop contacting her unless it was to hand over the wedding photos.

“You’re not getting anything from me. All my other beautiful clients will receive their images but you no f***ing way.”

While the couple had since received multiple kind offers from the community to recreate the experience and take fresh photos, they said it wouldn’t be the same given family had flown in from England for the day. 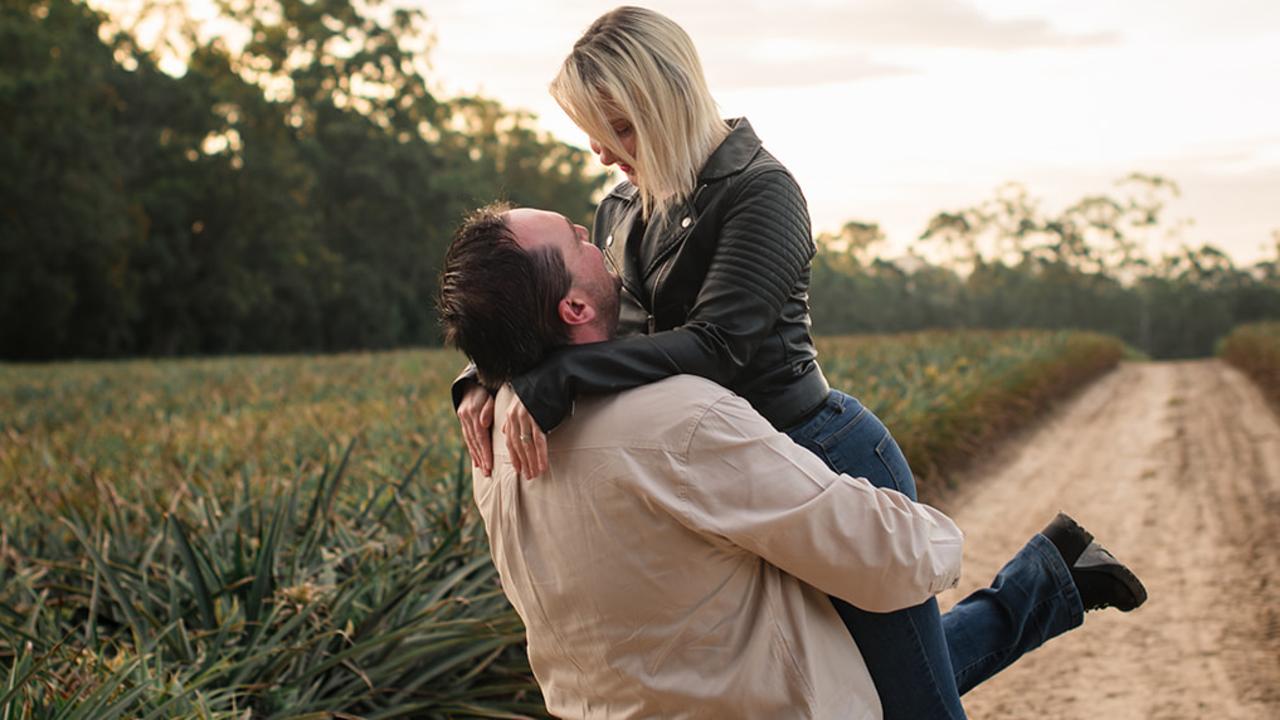 The couple were desperate to have the wedding photos delivered to them. Picture: Nadine B Collective

“I trusted her and let her be part of my day, and trusted her to take the most important photos, and she’s basically taken our money, which we work very hard for.

When called by news.com.au, Ms Johnson’s partner answered the phone but swiftly hung up.

A Queensland Police Services spokesperson told news.com.au it was investigating.

“Police have received a complaint relating to allegations referenced, investigations are ongoing and as such it would be inappropriate to comment further,” they said.