A screaming match between two players at a Melbourne golf club has emerged online, with the wild altercation attracting thousands of views.

The chaotic scene is understood to have unfolded at Cranbourne Golf Club during their annual club tournament over the weekend, with a disagreement between two players quickly descending into a expletive laden yelling match.

Footage shared to Twitter starts off with one enraged player marching up to two other men standing on the course.

“I don’t like spectators so why are there people watching? Why are they on the golf course?” the man says as he approaches.

Wow! Some…err…interesting scenes during the Club Champs at a Melb club last weekend…maybe they were playing for (the nearby) sheep stations after all? ðŸ˜‰ Fore! â›³ï¸ðŸŒï¸â€â™‚ï¸ pic.twitter.com/C4GA374tNg

This immediately sets off one of the golfers, a player in a red shirt, who storms up to the man and tells him to walk away before “I knock you the f**k out c**t”.

At this point the situation boils over and both men begin screaming in each other’s face.

“Go away you d**khead,” the older man screams back.

“Threaten me with violence? Take the first shot and I will have you sued for assault,” the first man screams.

This is when the third man intervenes, asking the older player to explain what is going on, prompting him to reply that the situation was “bulls**t” and point out that the club championships are underway.

The older man begins walking away before the man in the red shirt screams out asking why he was “hitting up on us”.

“I am not hitting up on you,” the man yells back.

“Well you f**king are when we are there you stupid c**t. You are a f**king idiot,” he responds.

Do you know more? [email protected] 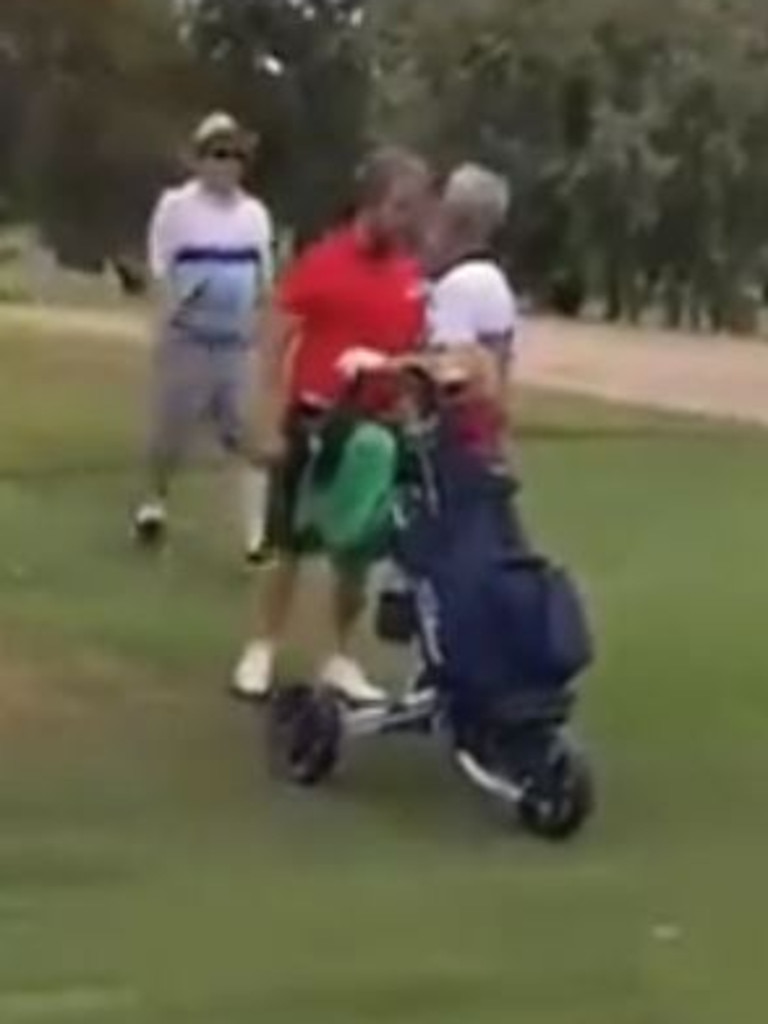 The man in the red shirt storms up to the older man and threatens to knock him out. Picture: John Milionis/Twitter 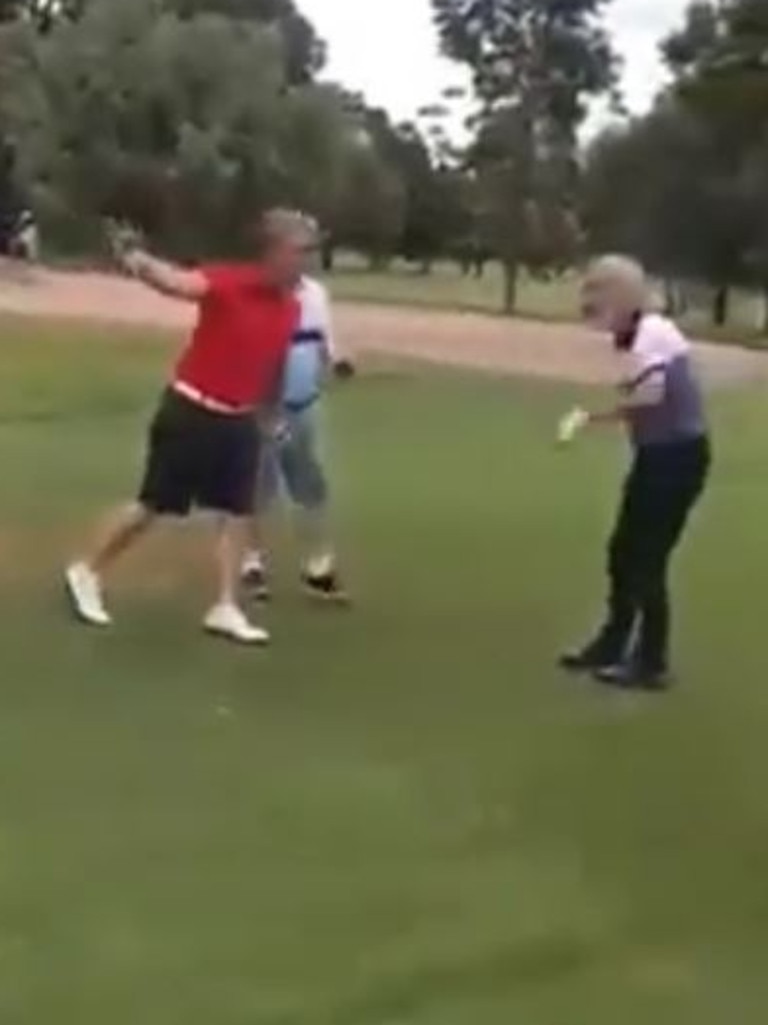 The pair continue screaming insults at each other. Picture: John Milionis/Twitter

The older player then claims that the man in the red shirt was walking down the course and stopping him from having his hits.

At this point, the third man pipes up again, saying if he felt there was a need to address something then he would do just that.

The older man then tells him he respects him “as a captain” but added that he made a “bad decision”, before walking away again.

The groups continue to yell at each other as they are walking away, with the older man screaming at the man in the red shirt that he is a “d**khead”.

After the groups finally separate, the older man tells the group he is with that he is “shaking like a leaf” and was going to make an official complaint to the club.

“You saw him get into my face. You saw him physically threaten me,” he says.

“I am still shaking like a leaf mate. I don’t like to be physically threatened. He is a f**king beast. Who the f**k is he threatening me?

“And how come the captain doesn’t pull him up for that behaviour? That is totally wrong behaviour. F**king threatening me with violence. Going to knock me block off. F**k that idiot.” 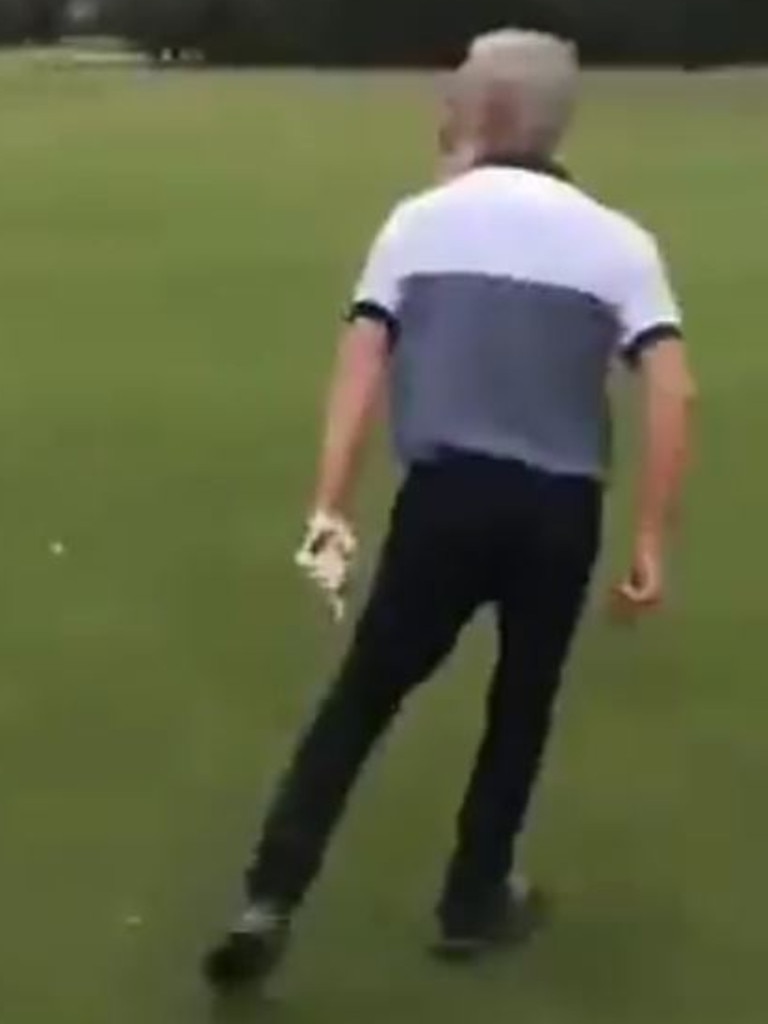 After the altercation the older man claimed he was ‘shaking like a leaf’. Picture: John Milionis/Twitter 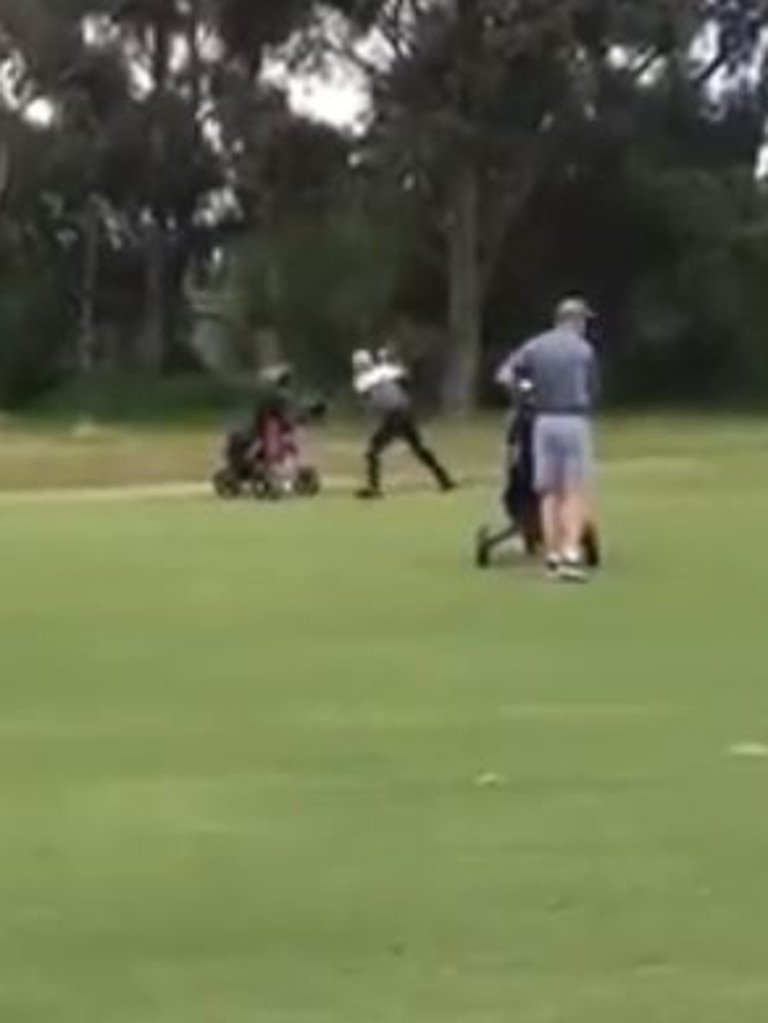 He then takes a poor shot which causes him to fly into another rage. Picture: John Milionis/Twitter

At this point, the player lines up his shot and takes a swing, which apparently didn’t go the way he wanted as he immediately throws his club to the ground.

He then starts smashing his club against his gold bag while screaming profanities.

The footage attracted thousands of views and comments, with people left in shock at the behaviour of those involved.

“Everything I hate about golfers right there in this video,” one person said.

“Such poor behaviour on all sides. Supposed to be a gentleman’s sport. Then again — perhaps not!” another person wrote.

One commenter suggested kicking both of the men involved out of the club, describing their behaviour as “woeful”.