Frustrated revellers trying to leave a popular festival were left sweltering in their cars for as many as nine hours after a major traffic bungle caused gridlock chaos.

Festival-goers have slammed organisers of the highly-anticipated Beyond the Valley music event, after spending hours in 30C heat trying to get home.

Footage from above showed the festival grounds swamped by thousands of cars stuck in gridlock for up to nine hours as they all tried to leave through a single exit.

Out of desperation, some even cut holes through wire fences to escape the chaos, while others allegedly collapsed after suffering dehydration and heatstroke, according to Twitter posts. Thomas McPhee, Carla Galvin, Monique Moor, Julia Olson had been queueing in their car since 9am. Picture: Supplied

The event attracts over 10,000 people over a four-day celebration of “music, camping and revelry” in Victoria’s Barunah Plains.

“There doesn’t seem to be any traffic control, and no one has managed to move in hours,” she told the Herald Sun.

“This is every man for himself, people have been cutting wire fences and driving through them, standing on top of cars trying to figure out what’s going on.

“It’s so hot, and we don’t want to use the aircon because we’re scared our battery might go flat.

“We’ve seen about ten cars break down, and most people don’t have reception which makes it even more stressful.

“We left our campsite at 9am and have moved about 20m since then.”

One concerned father told of the chaos his child had witnessed while leaving the festival.

“My daughter is finally leaving Beyond the Valley after waiting in her car in line since 8.30am,” one Twitter user posted.

With only one exit road out of the festival, people were left queuing in their cars for 9 hours. Picture: 7News

“She said people were collapsing from dehydration and organisers had to hand out free water. Apparently no traffic management so security has that job now.”

Another parent said it was his 18-year-old daughter’s “first time at a festival like this and it’s pretty troubling”.

“You wouldn’t want there to be a fire or something,” he wrote.

“It sounds like it’s easier to get out of prison than it is to escape Beyond the Valley.”

Organisers said the influx of cars exiting the festival, as well as general holiday traffic on the roads caused the traffic jam.

Beyond the Valley apologised for the delays in a statement on Instagram.

“We are experiencing traffic delays getting out of the festival today due to the influx of cars exiting the festival, as well as general holiday traffic on the roads,” they wrote. 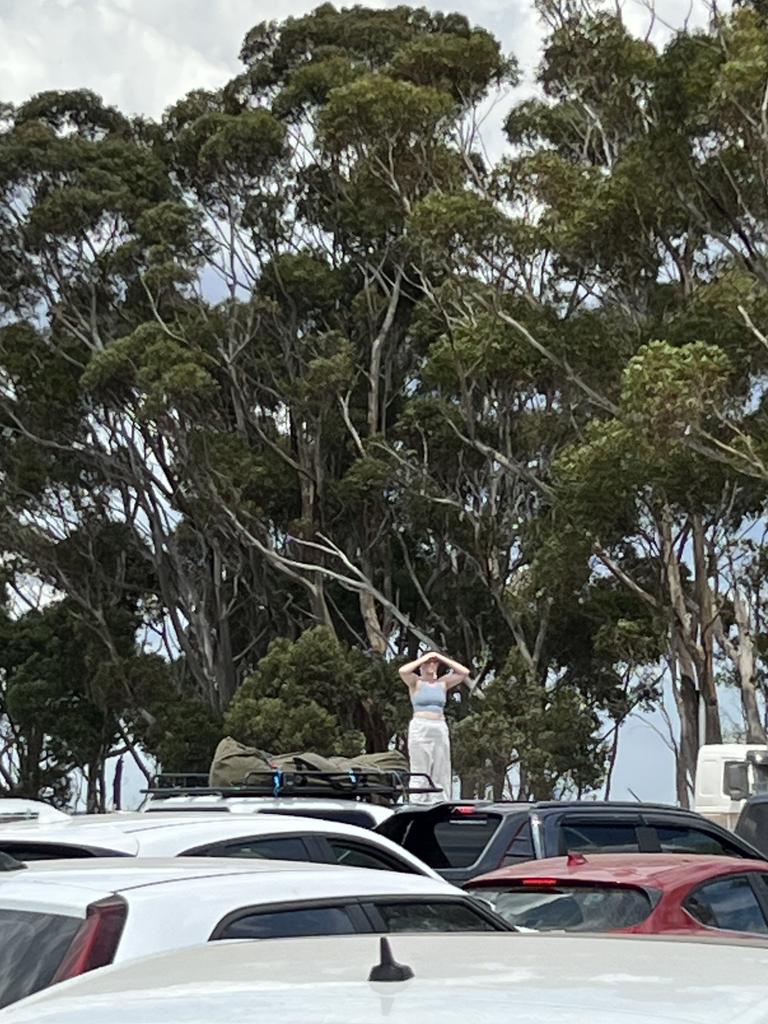 Some revellers suffered dehydration and heatstroke, according to Twitter posts. Picture: Supplied

“Our team have buggies doing water drops at cars, we have ample water tanks around the site to fill up bottles as well.

“We understand this process is not pleasant in the heat. Our priority is to get everyone home safely.”

In a later update, organisers said that all cars had finally exited the festival by 6pm and said they would look for solutions to avoid this problem in the future.

“We’d like to thank those who waited for extended periods of time in the head for your patience and wish to apologise once again to those impacted,” the statement read.

‘Let us out’: Traffic nightmare for those leaving Beyond the ValleyHow major music festival’s move could inject millions into economy

“Our first year at our new home was overall an incredibly successful and smoothly run event.

“Regarding the exist traffic, whilst there were some elements out of our control and waiting periods cannot entirely be avoided when large numbers of cars are wanting to leave at the same time, we do acknowledge there is a need to look for solutions to improve this process for next year.”