A “dangerous storm outbreak” is set to rock Australia’s east coast over the coming days with the addition of “wildly swinging temperatures” bringing intense heat and then uncommonly cool days for high summer.

However, it looks like Australia Day could start of dry for many places, and will likely remain humid in the east, but unsettled conditions are brewing and the public holiday could bring some rain.

“There is a risk of another storm outbreak with some heavy falls and other dangerous storm phenomenon,” said Sky News Weather meteorologist Alison Osborne.

“By Friday, a cool south-westerly change we’ll be moving through the lower west of Western Australia.

“By Saturday morning, a rain band will be steamrollering through South Australia with Adelaide seeing that cool showery change by the morning and into the afternoon.

“It then moves through the southeast of Tasmania and Victoria and will continue pushing through New South Wales and the rain will re intensify during late Sunday in to Monday over the eastern seaboard,” Ms Osborne said.

“Showers and storms are plenty with this and some wildly swinging temperatures.” 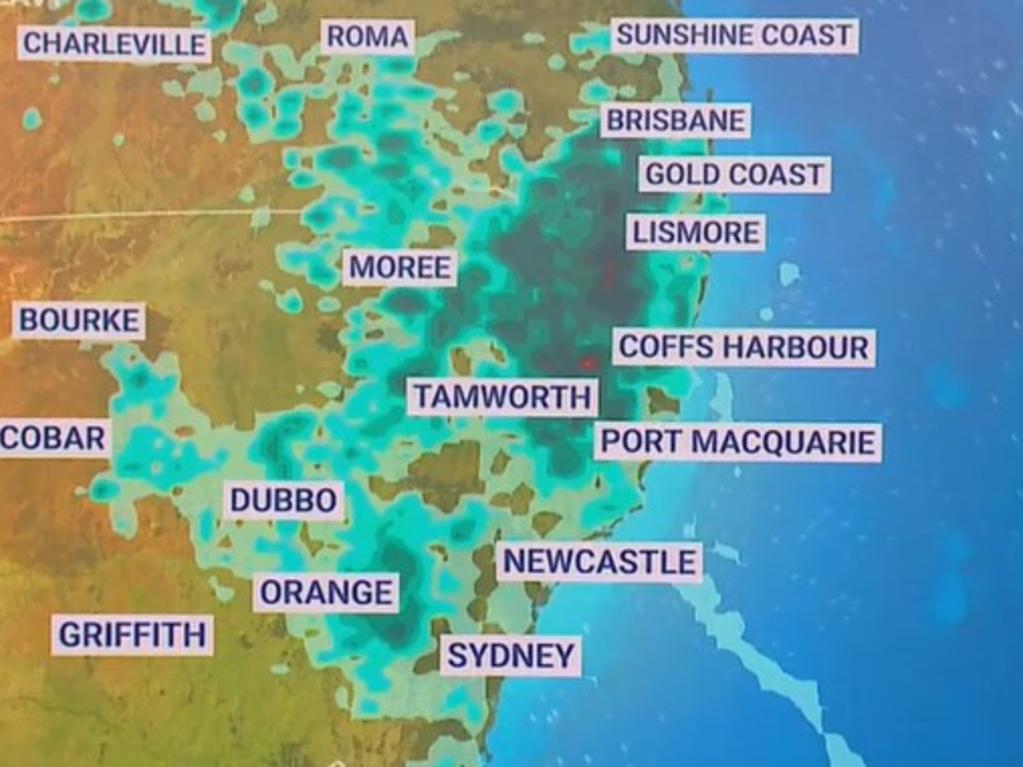 Across NSW and parts of Queensland storms and rain could build on Friday. Picture: Sky News Weather.

Dry, sunny and warm in Queensland

Not so much in parts of Queensland, however, with Brisbane seeing some pretty consistent weather and temperatures for the next few days.

Australia Day will be a warm and sunny 33C in the city with a low of 22C. Rinse and repeat Thursday across the weekend with little to no rain but perhaps dipping slightly to a high of 30C on Saturday.

Yet head west just as far as Toowoomba and rains and storms are possible on Thursday and Friday.

Townsville will be mostly sunny on Thursday with a maximum of 32C. However, showers are likely on Friday with up to 15mm in the gauge and more of the same across the weekend. 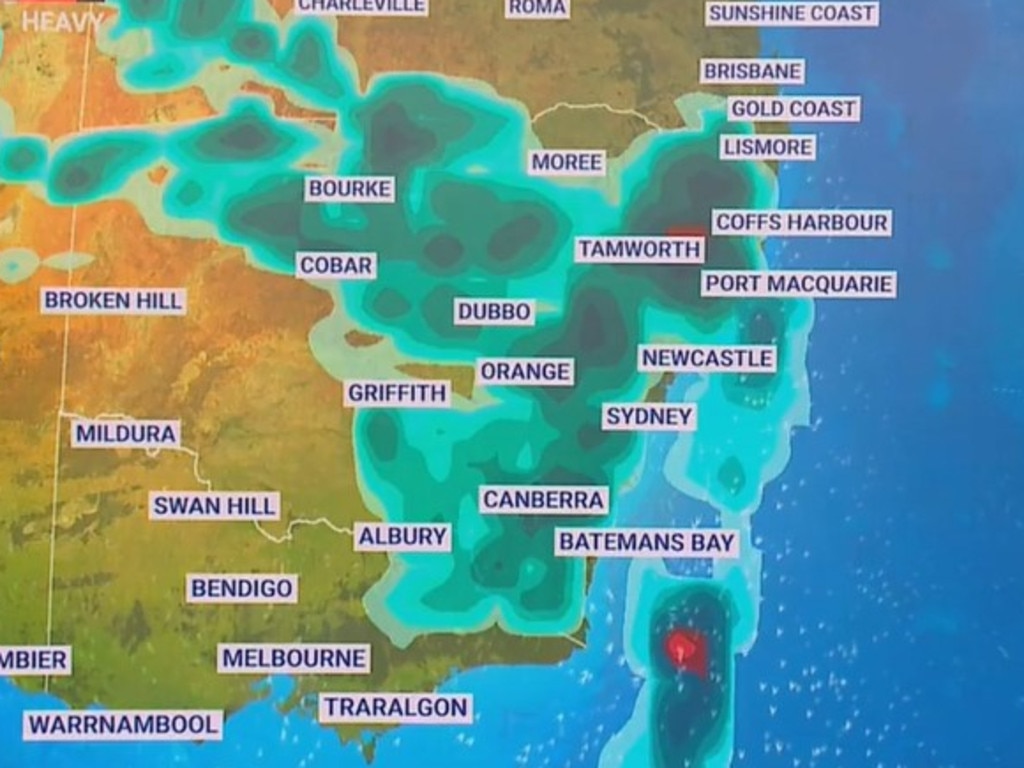 Becoming unsettled in Sydney with storms possible every day for the next week. It’ll be a warm 31C on Australia Day with early morning fog and that humidity remains as the sun comes out.

Watch out for a thunderstorm, potentially severe, in the afternoon and evening. The minimum will be 20C.

On Friday, the high drops down to 27C in Sydney, with more storms forecast. Then it’s back up to 30C highs for the weekend and with up to around 10mm of rain on Sunday.

Northern NSW is looking dry for the holiday but there is the chance of a severe thunderstorm on Friday followed by further rumbles across the weekend.

Canberra is at risk of a storm on Australia Day. If one turns up it will likely be in the afternoon or evening. Dry before that with a high of 32C and a low of 12C.

On Friday, the maximum is expected to be 28C then it jumps up to 34C for Saturday and then down to 28C on a showery Sunday. 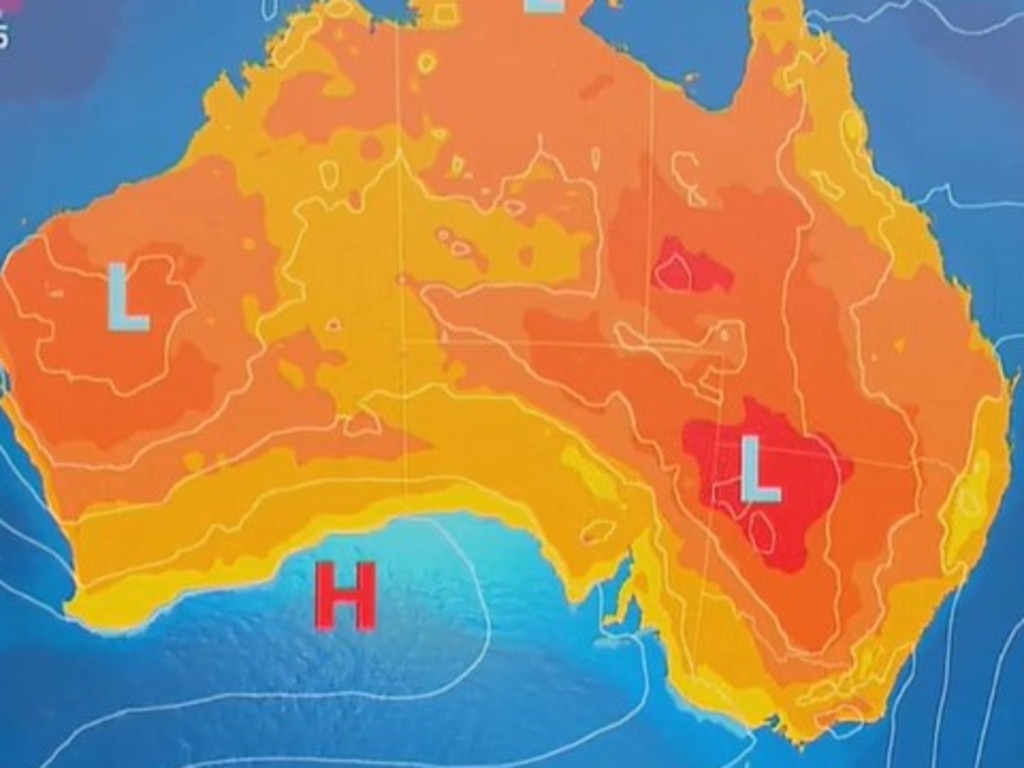 Temperatures across the south could be mild one day, and scorching the next. Picture: Sky News Weather.

Across the Murray and it’s going to be a much cooler story on Australia Day. Melbourne is only forecast to reach 22C as a cold front passes through.

Friday will be sunnier and warmer reaching 27C in the city. Then the “wild swinging” of temperatures, as forecast, takes effect with a scorching 35C on a windy Saturday followed by a 23C maximum on Sunday.

Hobart too will see a yo-yoing of the mercury. A cloudy Australia Day reaching 20C and bottoming out at 14C is expected.

Friday will see a 26C high and some sun followed by 31C on Saturday and then down to a 23C maximum for Sunday.

It should remain mostly dry in Tasmania.

Also mostly dry in Adelaide on Thursday peaking at 28C, with a low of 15C, and some cloud. Then the temperatures will likely shoot up to a stifling 37C on a baking Friday.

Saturday will see the maximums drop to 30C and then 27C on Sunday. It could be uncomfortable during the night in SA between Friday and Saturday with temperatures not expected to head below 24C even at dawn. There remains a slim chance of a tropical Cyclone off the Top End. Picture: Sky News Weather.

Hot in Perth, wet in Darwin

Australia Day in Perth will be sunny and 32C with an 18C minimum – perfect for barbecues. Cooler on a partly cloudy Friday reaching 27C before heading up to 30C on Saturday and 34C for Sunday as the heat intensifies.

“A tropical low has been making for wet and quite grey conditions over the northwest of the country,” said Ms Osborne who added there remained a “slim risk” for a tropical cyclone around the Top End.

But even if a cyclone doesn’t form, the system will bring the rain.

Darwin could see up to 15mm of rain on a stormy Thursday with highs of 32C. Those showers will continue over the weekend with up to 20mm on Sunday and Monday.