The dad of two men who shot dead two police officers and an innocent bystander in a brutal ambush on Monday afternoon has spoken out following the horrific ordeal.

Ronald Train, the father of Gareth and Nathaniel Train, was stern with waiting journalists as he returned to his South Toowoomba home in Southern Queensland’s Darling Downs region, on Tuesday, Courier Mail reported.

“I am not going to share anything with you, you can speculate and make up as much as you want. I have lost two children,” he said.

“I have already had conversations with police.” 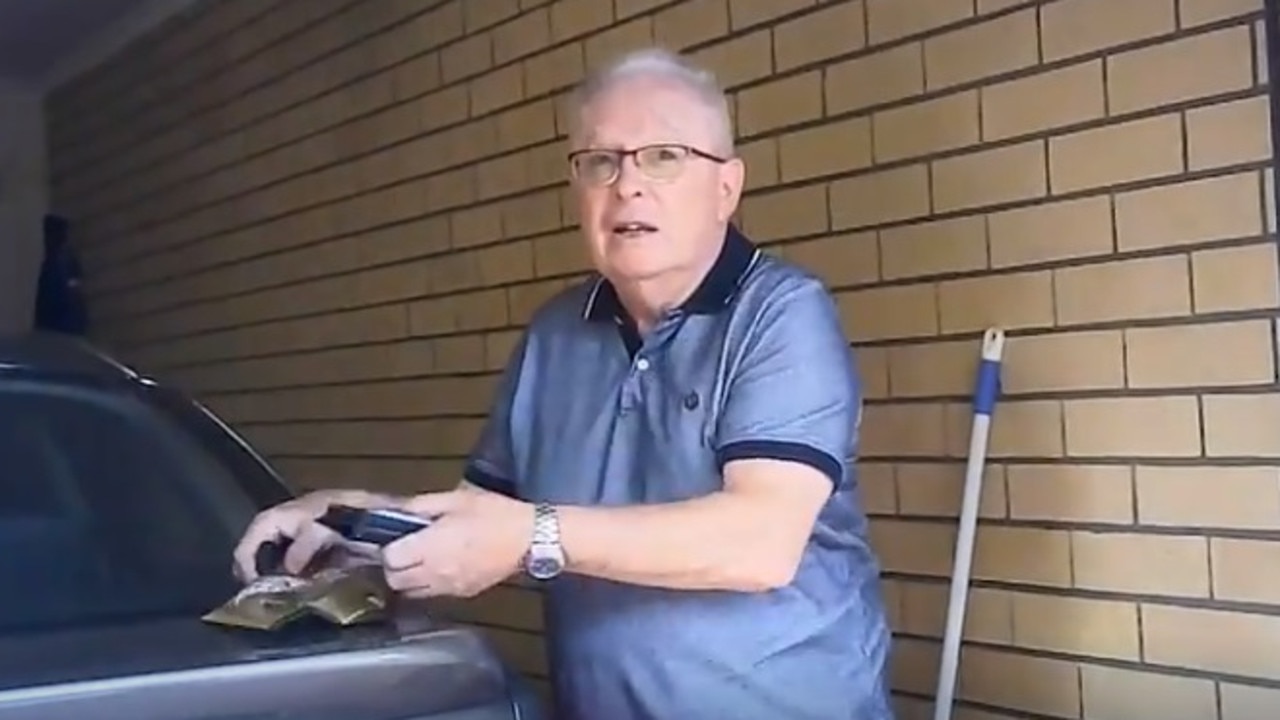 Ronald Train told journalists he had lost two children as he arrived home on Tuesday. Picture: The Chronicle

Ronald, according to the publication, is a retired pastor with 27 years’ of experience in Christian ministry. He also wrote four books on Christian theology.

Gareth, his wife Stacey and brother Nathaniel were killed in a gunfight with Special Operations officers after the brutal slayings of two police officers and a neighbour. 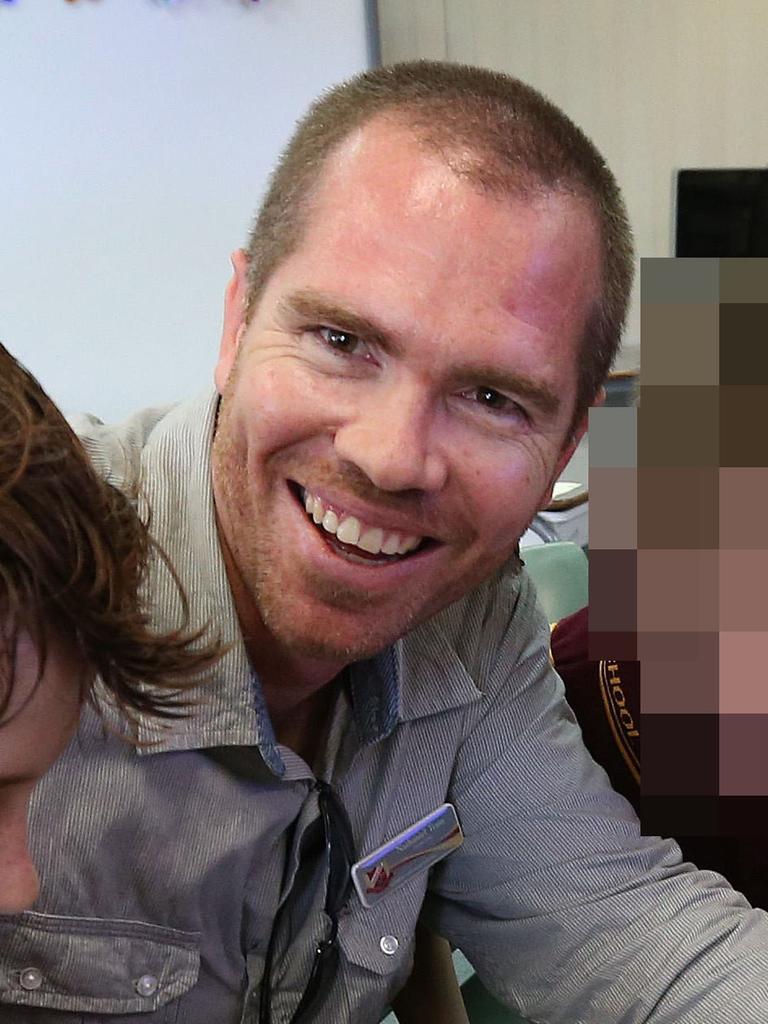 Former school principal Nathaniel Train was killed alongside his brother. 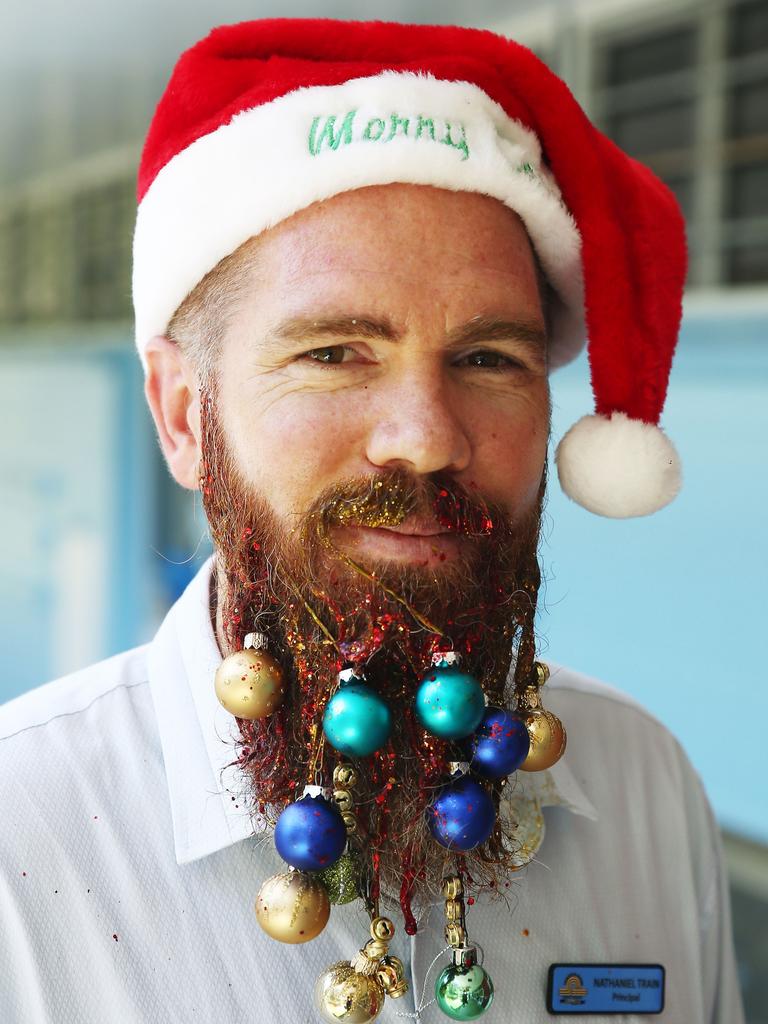 Police were initially called out amid concerns for Nathaniel’s welfare. Picture: Brendan Radke

On Monday afternoon, Constable Rachel McCrow and Constable Matthew Arnold were gunned down while carrying out a routine missing person inquiry at 251 Wains Rd, Wieambilla in Queensland’s Darling Downs region.

An innocent neighbour, Alan Dare, was also executed in the attack, with Queensland police commissioner Katarina Carroll confirming “a lot of ammunition and weaponry” had been found at the address.

According to property records, Stacey Jane Train and Gareth Daniel Train purchased the isolated, sprawling 43.51Ha property in February 2015 for $95,000.

Police had arrived at the Queensland property on Monday afternoon amid concerns for Nathaniel Train’s welfare. 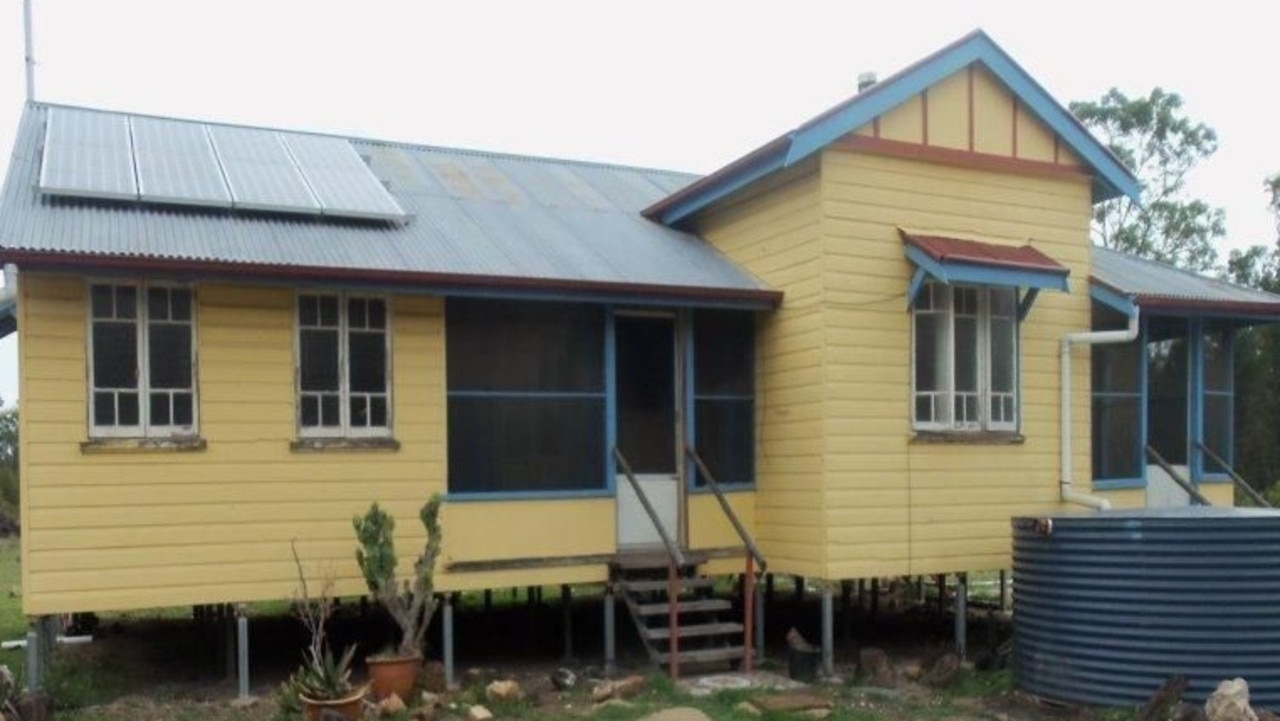 Two officers and a neighbour were gunned down at this property on Monday.

Nathaniel Train was a former school principal who officially left the NSW department of education’s employment in March this year, although he hadn’t worked at a school in the state since August 2021.

Before that time, he worked as a principal at a string of schools, including Yorkeys Knob State School, Walgett Community College Primary School and Innisfail East State School.

Meanwhile, Stacey Jane Train was listed as the Head of Curriculum at nearby Tara Shire State College as recently as 2019, and was also the representative of the Western Downs branch of the Queensland teachers union.

Gareth – who was killed alongside his brother and partner after the brutal slayings of two police officers and a neighbour – has been exposed as an online conspiracy theorist who hated cops and believed the Port Arthur massacre was a “false flag operation”.

One of the Queensland shooters, Gareth Train, appears to have a pretty prolific comments presence around Australian conspiracist and sov cit sites.

Train was a noted conspiracy theorist who regularly posted about his extreme views online.

An associate told The Guardian his descent into the world of conspiracy theories had been relatively recent, with Mr Train claiming the 1996 Port Arthur massacre was a false flag operation to “disarm the Australian population”, and repeatedly claimed the government was running “re-education camps”.

“Re-education camps are located at the end of the line. Monitoring the rail system will ensure no escape. Dissenters will find themselves catching the long black train,” he bizarrely posted under a 2021 article about QLD Rail’s surveillance capabilities, adding “beware of the boogie monster”.

He also voiced about his dislike for authorities, including the Queensland Special Emergency Response Team, and appeared to support the doomsday prepper movement. 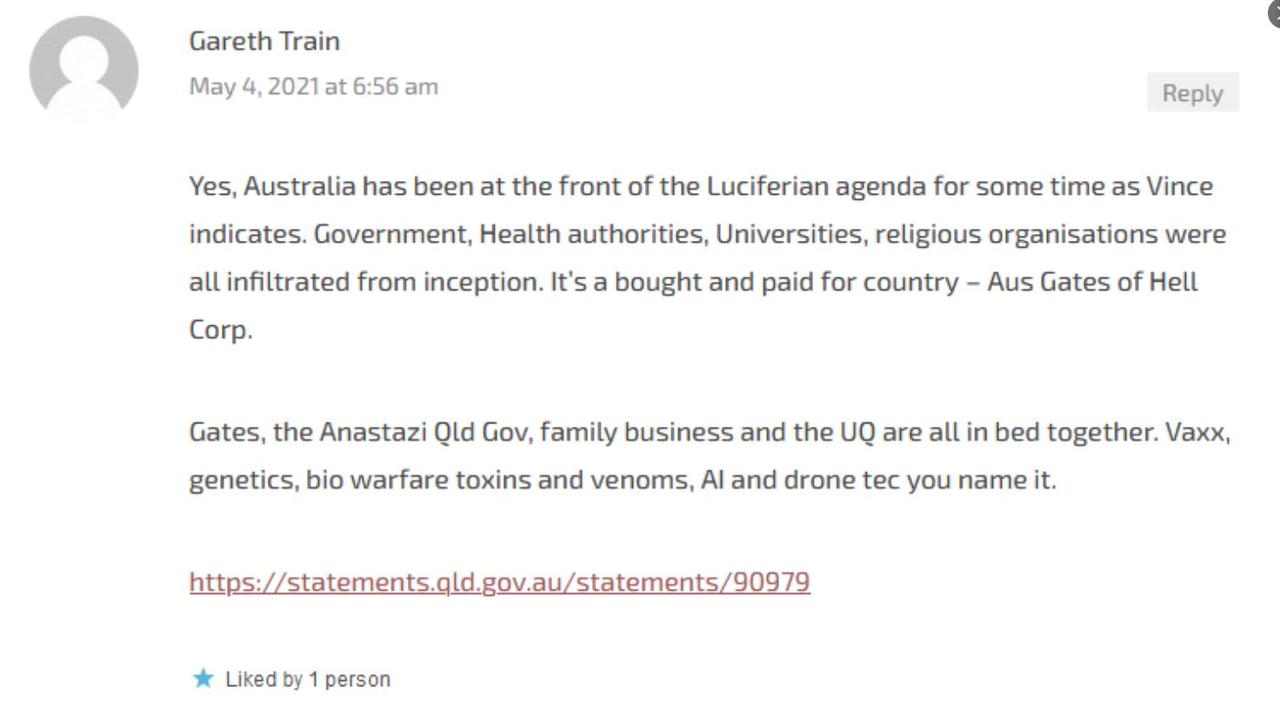 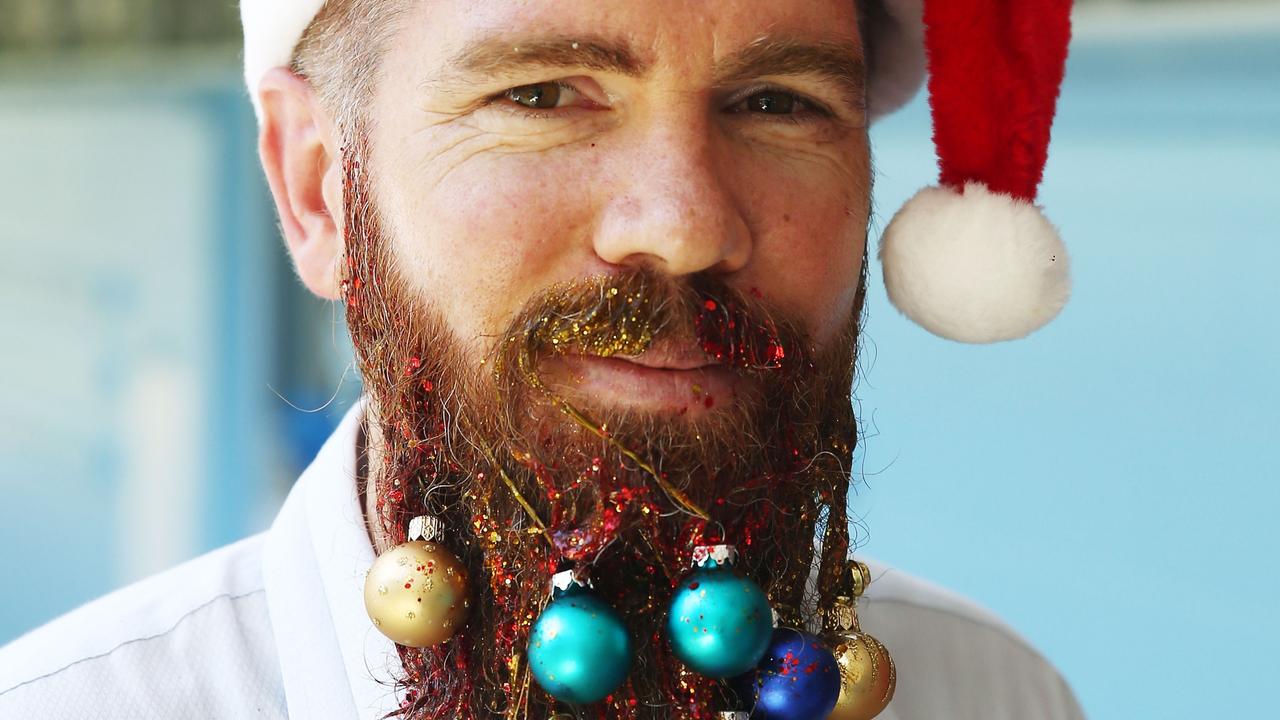 In a disturbing post on Citizens Initiated Referendums, Train provided a chilling clue about the horror to come, writing about citizen’s rights and his hatred of authorities.

“I have directed law enforcement to leave my premises over the last 20yrs, having no reason or grounds and at times have also asked them to remove their hands from their weapons or pull their pistols and whistle Dixie,” he wrote.

“Fortunately for me they have all been cowards.

“Our country is at a point where even cowards are now dangerous because they are unpredictable in groups, turn your back and you may find yourself out cold on the floor with law enforcement dancing on your head. We are seeing this in Victoria.”

In a comment posted on alternative news site Michael Smith News in 2020, Train also shared his outlandish beliefs about the Port Arthur shooting.

“Did everyone forget we are all pawns (military or civilian) all expendable in the governments (sic) games. Has anyone been paying attention or care. Remember 1996 people. Anyone who wasn’t brain dead and watched the live media coverage at the time (1996 Port Arthur MSM) and was aware of the political deceit lead up, knows that this was a Government Psychological Operation to disarm the Australian population,” he wrote.

“Martin was the perfect patsy. The Australian government is guilty of mass murder, it’s not the first time and won’t be the last. Joint operation CIA, MI6, Mossad, ASIO and the Australian SASR.”