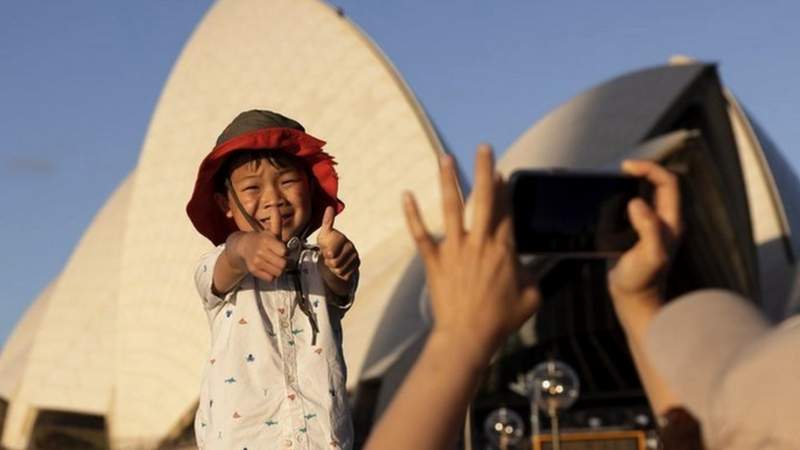 Australia has announced the reopening of its borders to vaccinated tourists and other visa holders for the first time in almost two years.

“If you’re double vaccinated, we look forward to welcoming you back,” Prime Minister Scott Morrison said.

The reopening, on 21 February, will be welcome news for many sectors including international education.

Australia has had some of the world’s strictest border controls throughout the coronavirus pandemic.

In March 2020, the government closed the borders. It barred most foreigners from entering the country and put caps on total arrivals to help combat Covid.

Some international students and skilled migrants have been permitted to enter the country since last December.

On Monday, Mr Morrison said those entering Australia when the borders fully reopened would need to provide proof of vaccination: “That’s the rule. Everyone is expected to abide by it,” he said.

Unvaccinated travellers who have a medical reason for not being jabbed will still need to apply for a travel exemption and, if successful, will be required to quarantine at a hotel.

Melinda de Boer, 44, from Switzerland, told the BBC that she was finally planning to travel to Melbourne to see her mum, who had breast cancer last year.

“Her grandchildren haven’t seen her for nearly three years. We are looking to go in the October or December holidays,” she said.

Ms De Boer said she was reluctant to book at the moment and was “worried about the airlines and masses of people going”.

Since the start of the pandemic, Australia has implemented strict measures to help fight the spread of Covid infections – even banning its own people from leaving the country last year.

Despite most of the country opening up, the state of Western Australia (WA) still has tight measures. It is currently closed to non-residents, including those from other Australian states, unless they have permission to enter.

There had been plans to open WA’s borders to interstate and international tourists this month, but that move was postponed indefinitely due to the Omicron variant.

Australia has so far reported more than 2.7 million cases of coronavirus and more than 4,240 Covid-related deaths, according to Johns Hopkins University data. Nearly 80% of the population is fully vaccinated.