The business owner that docked the pay of an employee over “excessive” phone use has hit back at accusations that denying the worker almost $300 was unfair.

Stephanie Doyle deducted $298.65 from the worker’s pay following his January 2 shift at Birdies Mini Golf and Sports Bar in Melbourne because he spent five straight hours watching movies and playing on his phone.

The business faced a barrage of backlash when the worker posted to Reddit complaining about not being paid fully, but now Ms Doyle has hit back.

She said in an interview with Sunrise on Wednesday the employee had been well aware of the business’ policies before the shift, having been trained on them and also issued two previous warnings. 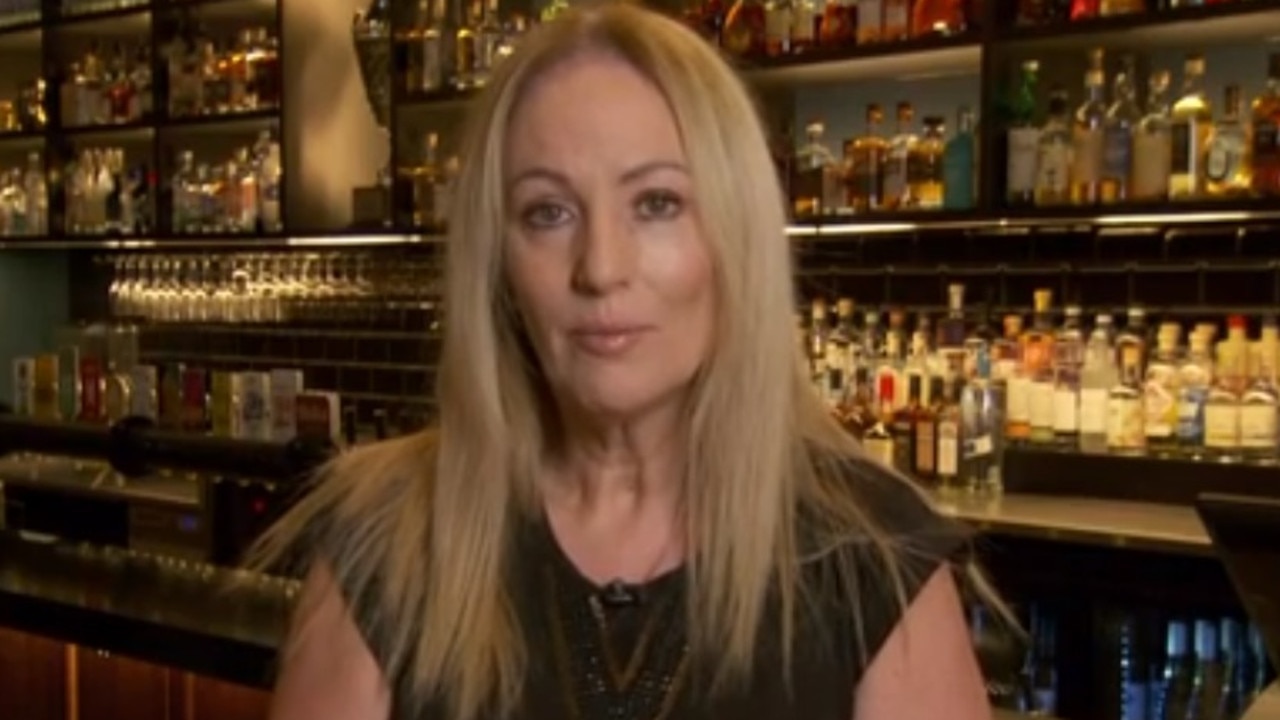 Stephanie Doyle has doubled down on her decision to dock her worker’s pay. Picture: 7News/Sunrise

“As a business owner we obviously have policies for my business that my staff are well aware of. They’re shown those policies and they read and review them on their very first trial shift. They’re also readily available at the front desk for them to look at any time,” she told hosts Natalie Barr and David Koch.

“This person in question actually received multiple warnings on prior shifts, which were paid in full, there were no adjustments or anything like that, just to make sure he understood the policy and the expectations here.”

Within 20 minutes of starting his shift, she said “he was head down, on his phone and that continued for a considerable amount of time throughout the day”.

“I started to call him and also send him some texts to say you need to be working and actually give him examples and a list of things he needed to work on because he was ignoring the work sheet in the bar which had those tasks listed,” she said. 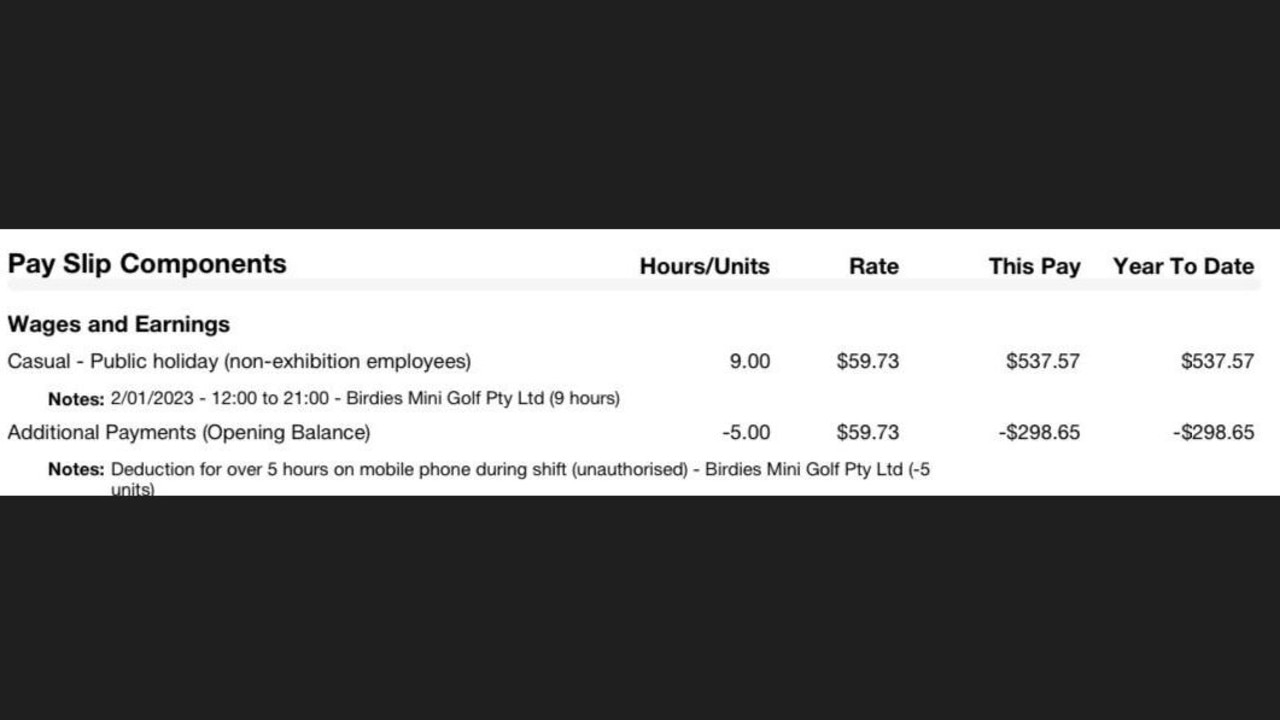 Close to $300 was deducted from the worker’s pay. Picture: Reddit

In a poll conducted by news.com.au, the majority of the public sided with the business owner.

Of the 1374 people to cast a vote, 51 per cent said they didn’t think the worker deserved to be paid, while 49 per cent believed he did.

Respondents agued he should have found ways to keep busy while he was on the clock.

“I can’t believe he said he was working this day single handed when it looked like the place was empty. There’s always something to do. It seems now that you g people feel so entitled to do whatever they want without any consequences. I think the boss did the right thing,” one comment submitted to news.com.au read.

“Some young kids think a job is a right, and not a privilege. You are there to work, not check you TikTok status. No sympathy bludger,” someone else said.

“Almost $60 an hour to stand around on your phone? The boss has a point. Looks like there is plenty to clean while waiting for customers,” a third wrote.

Many encouraged the worker to chalk up the experience as a hard-earned lesson.

“He needs to mark it down as a lesson learned and move on. He’d be a better worker for it. He wasn’t sacked at least,” one wrote. 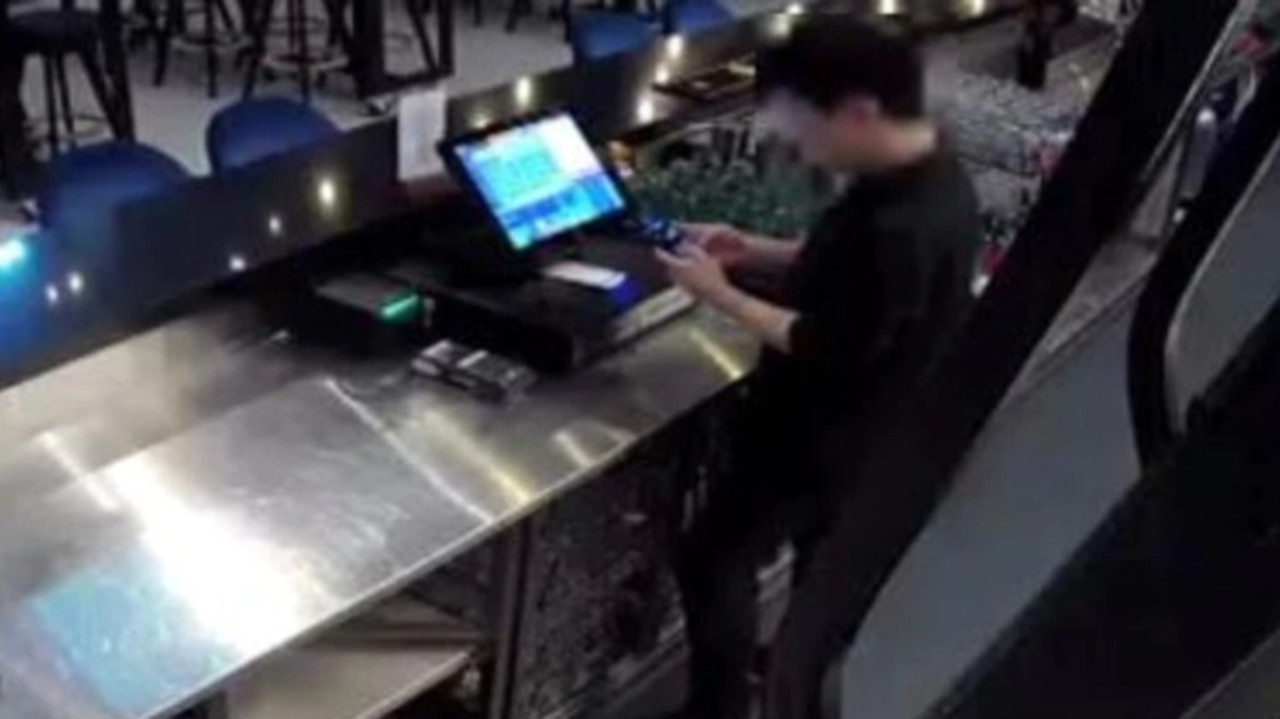 The worker has persisted in demanding he be paid by his former employer. Picture: Supplied

Another person suggested he was “stealing time” from his boss.

Some felt however the worker did nothing wrong and should therefore be paid in full.

“It’s pretty simple. If he was on his phone while there was work to do and customers waiting, this is wrong and he should not be paid. Or at least, I can understand her frustration. If there was nobody to serve and he is on his phone, then I am all OK with it,” a response read.

“He is entitled to be paid for being present at the business. He may have used his phone when no customers were around, but provided he stopped using it to serve customers, he was still a benefit to the business,” another argued.

‘Not what I signed up for’

In a previous interview with the network, the employee – who did not disclose his identity – said he didn’t believe the cleaning duties were his responsibility.

“They would like me to clean the windows, clean the golf courses and clean the whole venue and honestly that’s not what I signed up for,” he told 7 NEWS on Tuesday.

Ms Doyle on Wednesday said she found it difficult to believe that was his opinion of his expectations given a message conversation they had.

“I have a text message from him when I say to him that ‘your job is not just about standing behind the bar. A hospitality job includes all of these other things’. And he writes back with ‘understood’ and puts a thumbs up emoji,” she said.

“He understood exactly what goes on. It’s a typical hospitality job. When there’s no customers, there’s always other things to do.”

Following the controversy, Ms Doyle said her business had been harshly affected.

“It’s affected it dramatically. Just before our interview the phone rang and it was another person issuing me a death threat,” she told Sunrise.

“I get emails, my staff are getting these abusive phone calls. My team don’t deserve this.

‘Not what I signed up for’: Worker hits backInternet bombards boss with ‘vile’ messages

We are getting some messages of support which are really appreciated. But it’s been incredibly hard.”