One of the architects of the proposed Indigenous Voice to parliament has been named the 2023 Senior Australian of the Year.

Professor Tom Calma AO has been recognised for his work as a respected human rights and social justice campaigner.

The Canberra-based, Kungarakan Elder has worked for more than 45 years at local, community, state and international levels championing the rights, responsibilities, and welfare of Aboriginal and Torres Strait Islander peoples.

Professor Calma’s call for Australia to address the gap in life expectancy between Indigenous and non- Indigenous peoples was the catalyst for the Close the Gap Campaign.

He was instrumental in establishing the National Congress of Australia’s First Peoples; has led the Tackling Indigenous Smoking program; co-chaired Reconciliation Australia for over a decade; and co-led the co-design of the Voice to Parliament proposal.

Currently Chancellor of the University of Canberra, the 69-year-old was the first Indigenous Australian inducted as a fellow of the Australian Academy of Science.

Professor Calma believes education is the key to advancing Indigenous peoples and says his father remains his inspiration behind his life’s work. 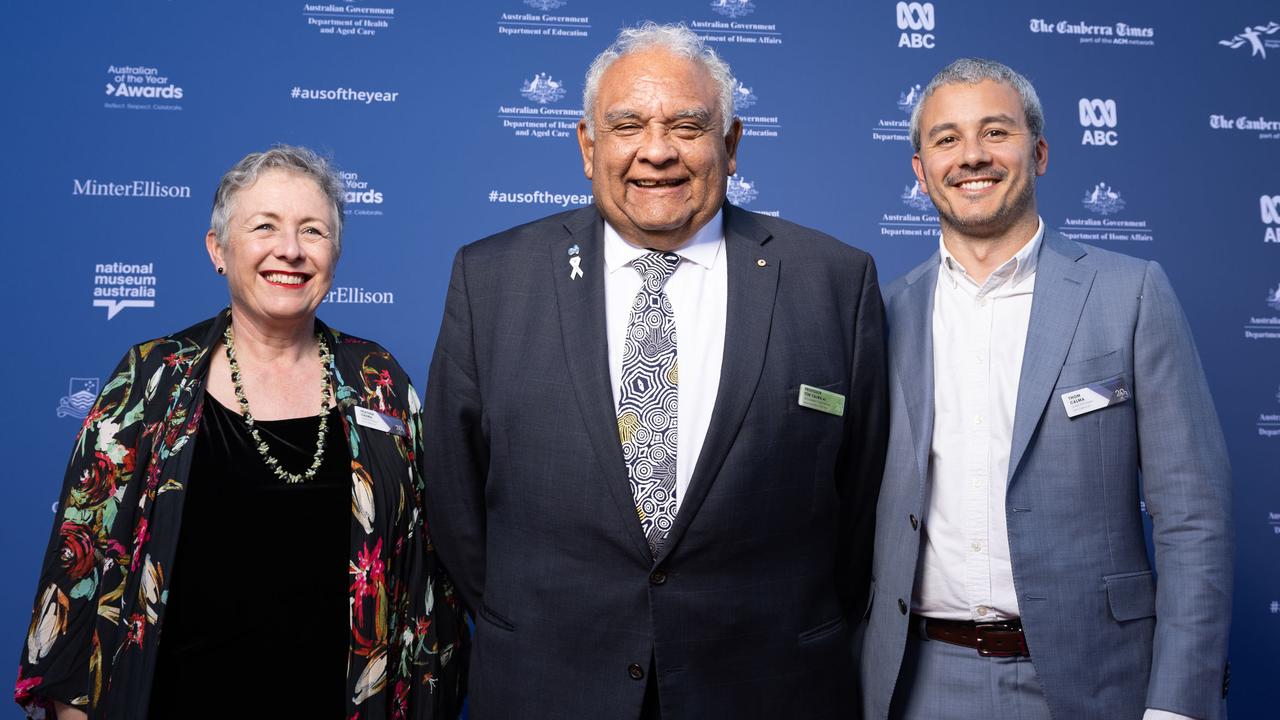 Socceroo Awer Mabil has been named the 2023 Young Australian of the Year.

Mr Mabil, 27, grew up in a Kenyan refugee camp after his family fled civil war in Sudan, before coming to Australia when he was 10 years old.

In 2019, just a year after he achieved his dream of playing for the Socceroos, his sister died in a car accident.

He says he now feels “unbreakable” and that it is his experience of hard times, the memory of his sister and the knowledge that young people see him as a role model that drives him to perform.

It’s what he does that he wants to be known for, not his background, he said. 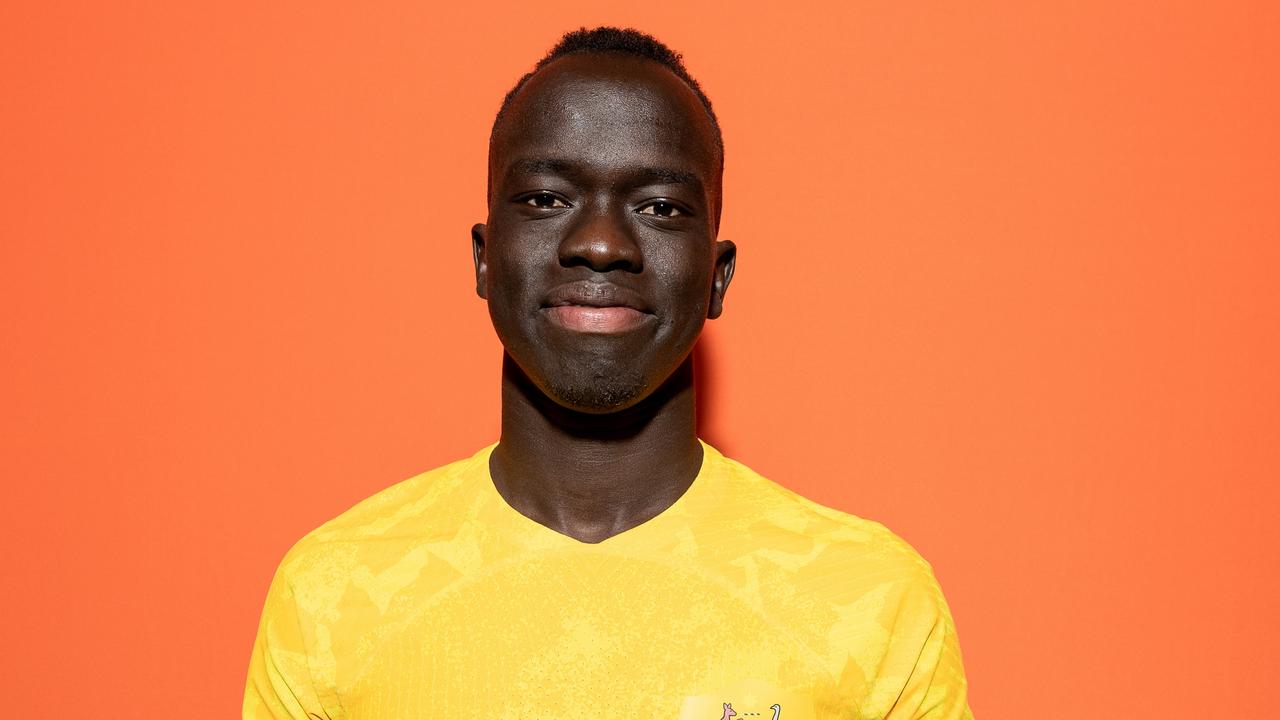 Awer Mabil has been named 2023 Young Australian of the Year. Photo by Ryan Pierse – FIFA/FIFA via Getty Images)

Mr Mabil was unable to attend the awards presentation in Canberra due to team commitments in Europe. His mother Agot Dau Atem and uncle Michael Matiop Dau Atem accepted the award on his behalf.

In a taped acceptance message, Mabil said he was motivated to help others after himself being given a helping hand in Australia.

“You know, Australia gave me and my family that opportunity to follow our dreams,” he said.

“I reached out to my football family and collected all the football boots. I took them to the refugee camp where I was born and Barefoot to Boots has grown since.

“It has become something more than football.”

A few of the nominees for the Young Australian of the Year Award were unable to make it to the ceremony in Canberra, including musician Genesis Owusu and Mr Mabil, whose families attended on their behalf.

But the most notable absence was Olympian Peter Bol, named Western Australia’s Young Australian of the Year before he allegedly tested positive to a banned performance enhancing substance.

The 28-year-old 800m runner, who placed fourth at the Tokyo Olympics, maintains his innocence and his legal team have said they will fight to clear his name. 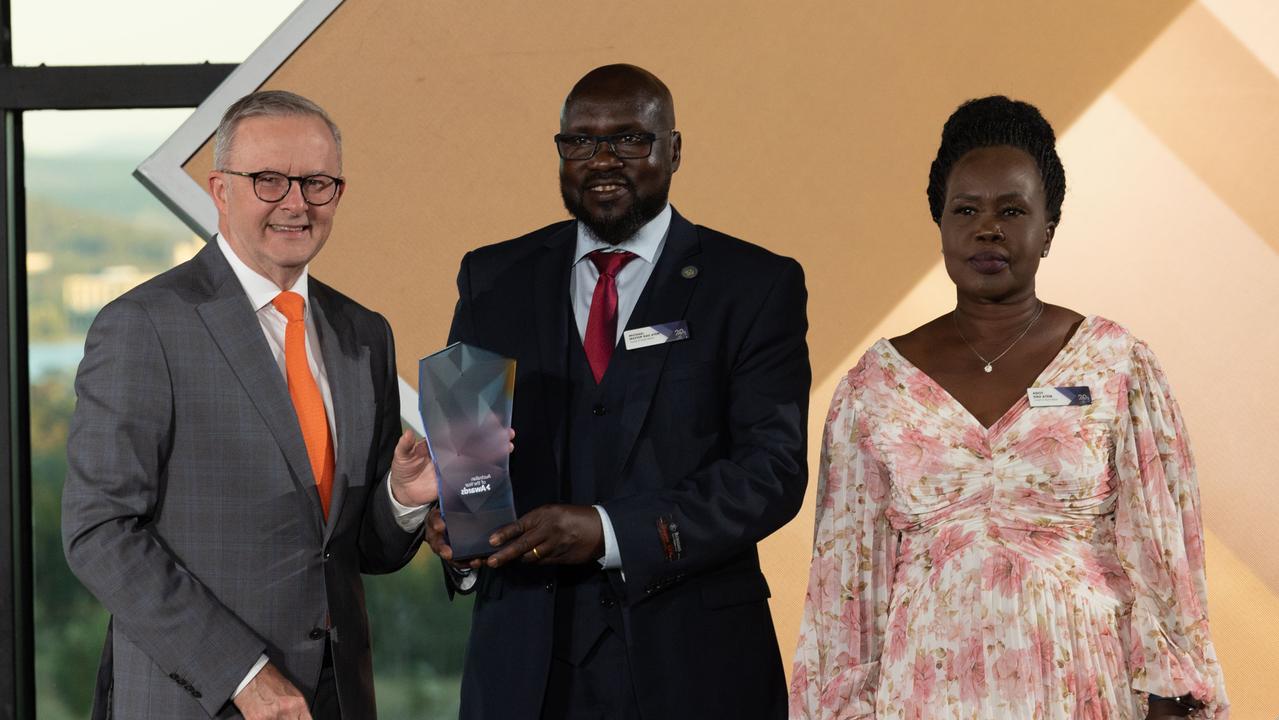 Sydney-based Amar Singh was named Australia’s Local Hero for 2023 after an idea sparked by racial hatred directed against him turned into a national movement of kindness.

Mr Singh, was recognised for his work with the charity Turbans 4 Australia, which he founded in 2015 after experiencing racial slurs and insults because of his Sikh turban and beard.

The 41-year-old wanted to show people they didn’t need to be afraid of people who looked different to them and began helping struggling Australians.

His charity has gone on to deliver hay to farmers experiencing drought; supplies to flood victims in Lismore and bushfire-impacted people on the South Coast; food hampers to the isolated and vulnerable during Covid-19 lockdowns; and supplies to the Salvation Army in central Queensland in the devastating wake of Cyclone Marcia in 2015.

Every week, the volunteers at Turbans 4 Australia package and distribute up to 450 food and grocery hampers to people experiencing food insecurity in Western Sydney.

They also raise awareness and funds for important causes while promoting multiculturalism and religious tolerance. 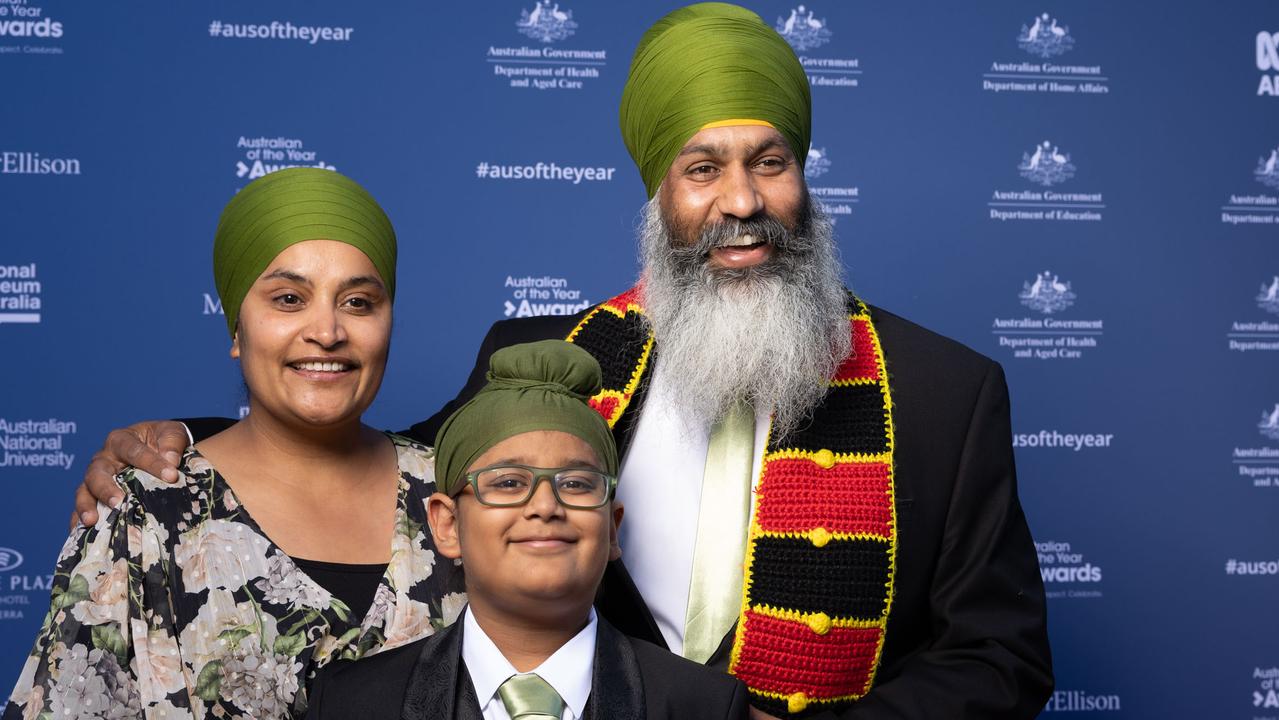 Accepting the award, Mr Singh said his goal since arriving in Australia at 15 was to “build bridges” between cultures and religions.

“The benchmark of Australianness? There is none, ‘cause we’re all equal,” he said.

“We all come from different lands, from our wonderful First Nation people to our newest migrants. We’re all equal, all one.

“I’m planting a tree today. I might not be around to sit in the shade, but it’s for the next generation.

“What we want to do is create not just an understanding of our culture but the cultures around us, of every beautiful food, lunch box.

“Every kid, I want them to be proud of their food, their language, their culture and their parents.”

Speaking to the crowd ahead of the awards announcements at the National Arboretum in Canberra, the Prime Minister said the nominees for 2023 were a diverse group of “global stars and local heroes”.

He welcomed the 32 finalists, whom he described as being both young and “rich in years”, from “all backgrounds and from every part of our continent”.

”They inspire us by living and serving and upholding our nation’s values,” Mr Albanese said.

”Our compassion and generosity, our courage and initiative, our ingrained sense of fairness and our deep belief in service to community.”

”You have brought tremendous passion, great decency and endless good humour to your roles,” he said.

”And in doing so, you have set an incredibly high bar for those who will follow you and offered a powerful example to us all.” Mr Albanese began his speech with a nod to reconciliation, acknowledging Canberra’s traditional owners and reminding Australians of the upcoming referendum on enshrining an Indigenous Voice to parliament in the Constitution.

The awards ceremony is held each year on the eve of Australia Day, a date which is becoming increasingly divisive because many people now see it as reflecting Indigenous dispossession and suffering rather than a day to celebrate.

Mr Albanese used his speech on the eve of January 26, broadcast live to hundreds of thousands of people across the nation, to issue a rallying call to Australians.

He said Australia Day was a time to “celebrate how fortunate we are to live in the greatest country on earth”.

”And each of us knows it can be greater still: more fair, more prosperous, more equal,” he said.

”A nation where the doors of opportunity are truly open to all. Together, this year, let us dedicate ourselves to the pursuit of that ambition.”

Mr Albanese also paid tribute to the Australians battling the aftermath of the devastating flooding that affected large parts of the country last year.

”Time and time again, the worst of nature reveals the best of our people and their character,” he said.

”As the saying goes, ‘kindness in another’s trouble – and courage in our own’.

”And whatever challenges the future brings, we know Australians will rise to meet them.”

Outgoing Australian of the Year Dylan Alcott was the first to arrive on Wednesday evening, dressed in all black with matching sunglasses.

The wheelchair tennis champion and disability advocate joked as he arrived: “Am I on the list?”

Speaking to reporters on the red carpet, Mr Alcott shared some advice for his successor in 2023.

“Number one, be yourself. I still don’t know why I’m Australian of the Year, but there’s a reason for it.

“And three, it’s not just about you. It’s about amplifying the voices of what you’re passionate about and the people that you care about in your community.” 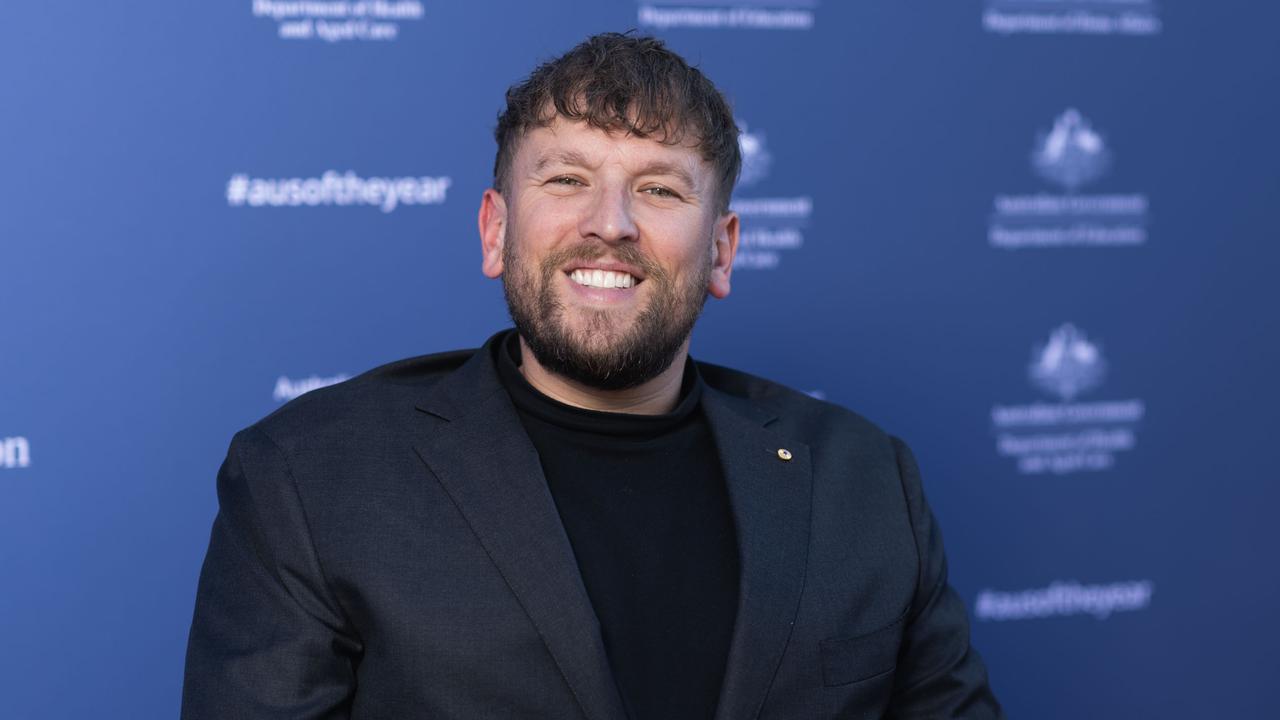 Outgoing Australian of the year Dylan Alcott has given three tips for the new titleholder. Picture: NCA NewsWire / Gary Ramage

Mr Alcott was followed by the nominees for each of this year’s award categories, many of whom walked down the red carpet with a combination of nerves and excitement.

Former Socceroo and human rights advocate Craig Foster, who could be the next Australian of the Year after being named the NSW winner, said it had been “amazing” to meet the other state and territory recipients.

“It’s been wonderful to get to know them and, and there’s already some collaborations happening,” Mr Foster said outside the Arboretum.

“And as I said this afternoon, I think whoever wins any of the categories tonight, Australia can feel very comfortable that they’re well served by the Australians of the Year.” 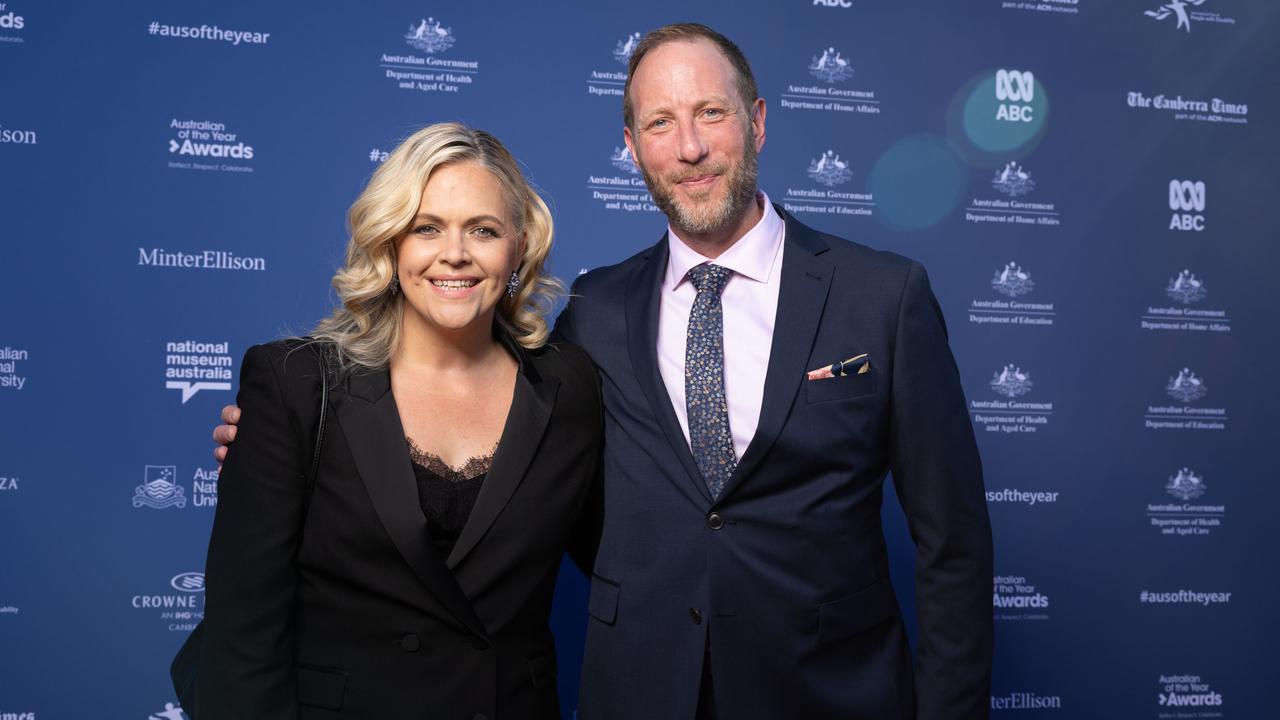 South Australian Taryn Brumfitt, a body positive activist, is a nominee for Australian of the Year. She arrived with her partner Tim Pearson. Picture: NCA NewsWire / Gary Ramage

Professor Tom Calma AO, who is up for the Senior Australian of the Year Award, said he wanted to help Australians understand the Indigenous Voice to parliament was nothing to feel threatened by.

The long-time Aboriginal rights campaigner, who is one of the architects of the Voice, said the proposed advisory body would benefit both Indigenous and non-Indigenous Australians.

“It’s not going to have any veto rights or anything like that. But it’s good common sense.”