Some very un-Australian weather could be on the cards for Australia Day with parts of the country forecast to be warm, but potentially wet and stormy, while in other areas it might be clear but cold.

So either the barbecue could fall victim to a thunderstorm; or you’ll have to wrap up for alfresco entertaining.

However rainfall levels should be fairly light in these areas so the day won’t be a washout.

The more major weather event brewing, however, is searing heat from north west Western Australia making its way towards the south and east over the coming days.

“The heat will build into South Australia on Friday, in some places above 40C.

“And then it will target Victoria on Saturday. So for the Australian Open it’s looking like we could be soaring into the mid-30s, maybe even close to 40C, in parts of Victoria on that day,” said Mr Sharpe. A low is currently heading into the Tasman Sea which should see rain levels lessen until Thursday. Picture: Sky News Weather.

A low is currently moving into the Tasman Sea. That could still bring some showers over the coming days, particularly for coastal NSW, but it should dissipate until Australia Day itself.

At the same time unstable, stormy weather is headed toward the east. For the next day or so that will be focused on inland areas but come Wednesday and into Thursday the inclement conditions could hit the east coast and cities.

It will also bring some warmth with it. But in contrast, Victoria and Tasmania will be kept much cooler by southerly winds.

Sydney will be partly cloudy on Tuesday with a high of 28C rising to 29C on Wednesday with Australia Day itself pushing just over the 30C barrier. Lows will be around 20C.

There is the chance of a thunderstorm on Wednesday and Thursday. On Australia Day those storms – accompanied by rain – are likely to occur in the afternoon or evening. They could be severe in the city’s west.

There could also be fog on Australia Day morning. 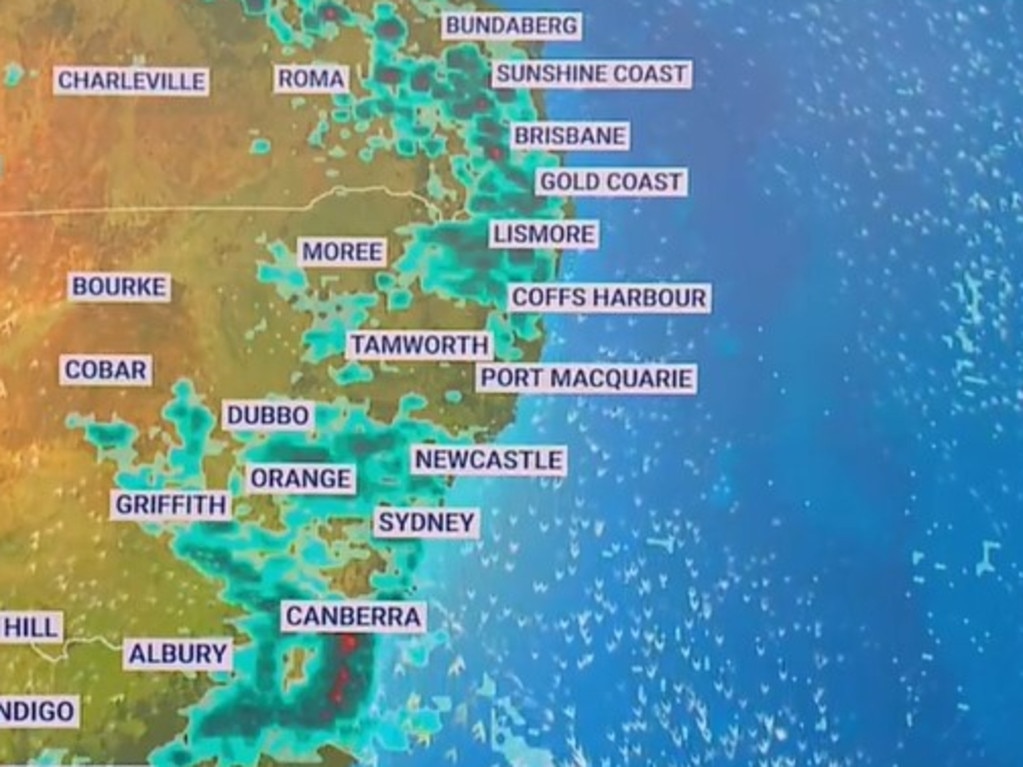 Northern NSW, places like Coffs Harbour, will see showers and storms all this week but they’re likely to be more full throttled on Tuesday and Wednesday than Australia Day itself.

And it’s not dissimilar on the south coast either with storms in Ulladulla most days including Australia Day.

Canberra’s temperature is on a similar trajectory up into the thirties but Thursday could reach as high as 33C in the capital.

Minimums will be around 13C, and there is the chance of a possibly severe storm in the afternoon and evening of Australia Day.

A steady, warm week is predicted in Brisbane with mostly 33C maximums and 22C minimums including on Thursday.

But just like NSW, storms are possible every day this week.

Some rain is expected in Cairns, particularly on Friday and Saturday, with up to 20mm each day. Australia Day could see a shower with a high of 32C. 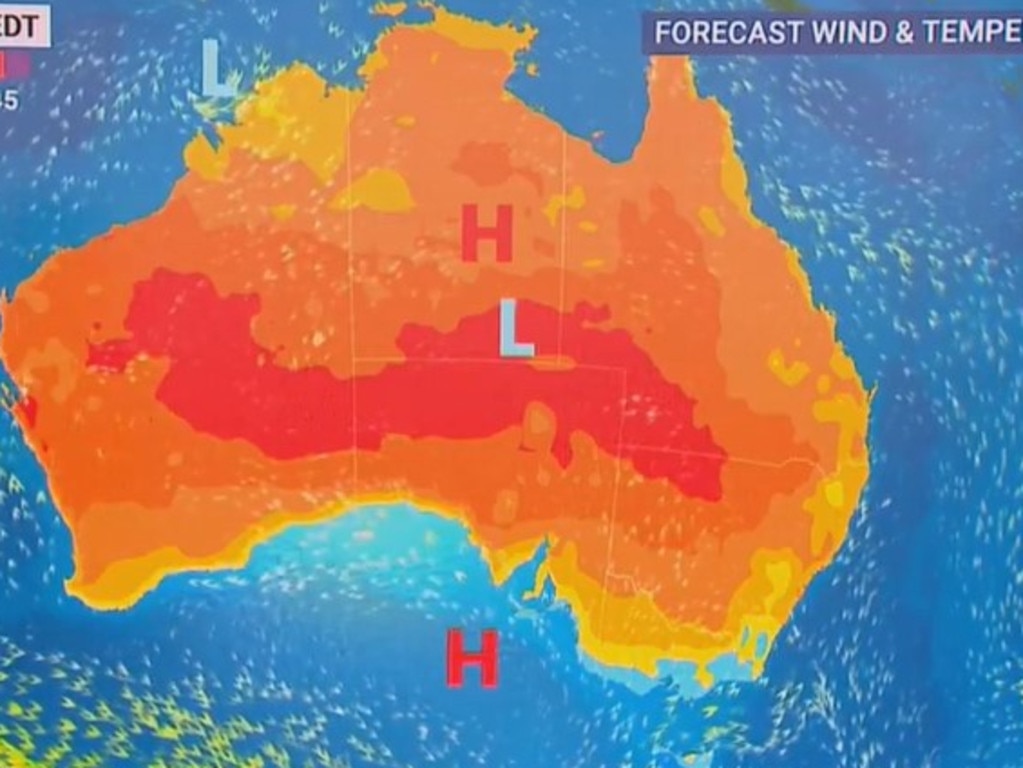 Heat is bubbling up in the interior and heading Victoria’s way for the weekend. Picture: Sky News Weather.

Cool in south then temperatures skyrocket

In Melbourne, the mercury will briefly rise – from 27C on Tuesday to 29C on Wednesday. And then, just in time for Australia Day, down it goes to a high of just 22C before then warming up again for Friday.

Storms are possible on Tuesday and Wednesday.

The temperatures will then heat up even more. On Saturday expect a maximum of 36C in the city.

A party cloudy week in Hobart but, like Victoria, the temperatures well see saw with Australia Day being chilly in comparison to other days. A high of 26C on Wednesday will drop to 21C on Thursday and then peak at 31C on Friday.

Adelaide is warming up during a mostly sunny week. Temperatures will reach into the high twenties on Tuesday and Wednesday and then 30C for Australia Day before shooting up to 37C on Friday and 35C on Saturday. Minimums will be around the mid-teens.

Unlike the east coast, Perth should be sunny and summery for Australia Day with a week mostly north of 30C.

Thursday is looking like it’ll hit 31C with a low of 17C. The weekend should then head down to the mid-twenties.

Stormy all week in Darwin with some heavy falls. Around 25mm could come down on Tuesday and then between 10-15mm on both Wednesday and Thursday.

Highs of around 31-33C will be regular this week with dawn lows of 25C.