A video has emerged of a previously unreported violent clash between Chinese and Indian troops at their disputed Himalayan border.

The soldiers fought with rocks, sticks and metal pipes before breaking through a barrier on the disputed border between the two countries.

The incident — which has been described by experts as a victory for the Indian side — is the most recent escalation in five decades of conflict.

In the video, which began circling on Indian social media in December, soldiers from both countries can be seen on mountainous terrain and separated by barbed wire. Indian troops appear to be beating Chinese soldiers with makeshift weapons, including wooden sticks and metal pipes. Several of the soldiers throw bricks and stones. 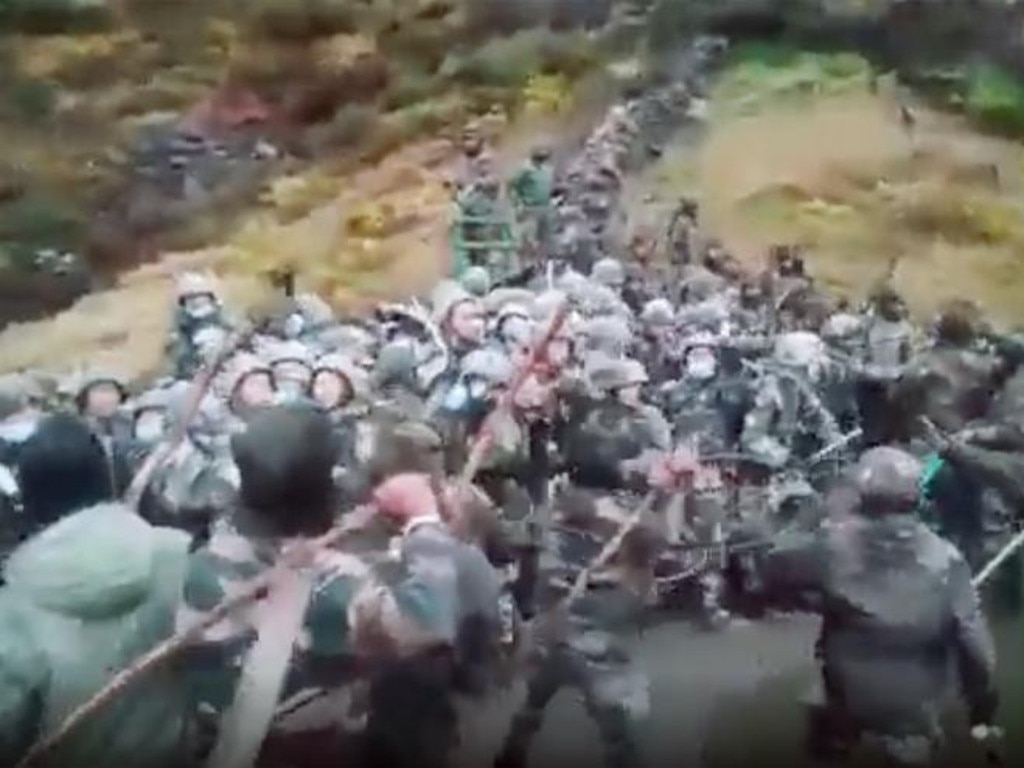 The troops are shown attacking one another with makeshift weapons, before Indian soldiers cross over a barbed wire barrier. Picture: Supplied.

Many of the Chinese troops, gathered on the other side of the wire, also appear to be holding wooden planks or batons.

The barbed wire collapses mid-video, and the Indian soldiers cross through – prompting the Chinese troops to flee over a stone wall, amid cheers from the Indian side.

The video is believed to have been filmed in the mountainous Indian state of Arunachal Pradesh at the Line of Actual Control – the de facto border between the two countries – on September 28, 2021.

It is not clear who filmed or released it, though the Indian defence minister confirmed a brawl had taken place and minor injuries incurred.

A 1996 agreement between New Delhi and Beijing forbids the use of firearms during border skirmishes.

Fighting with primitive weapons can avoid an even more deadly — and dangerous escalation between the world’s two most populous nations both of which possess nuclear weapons. 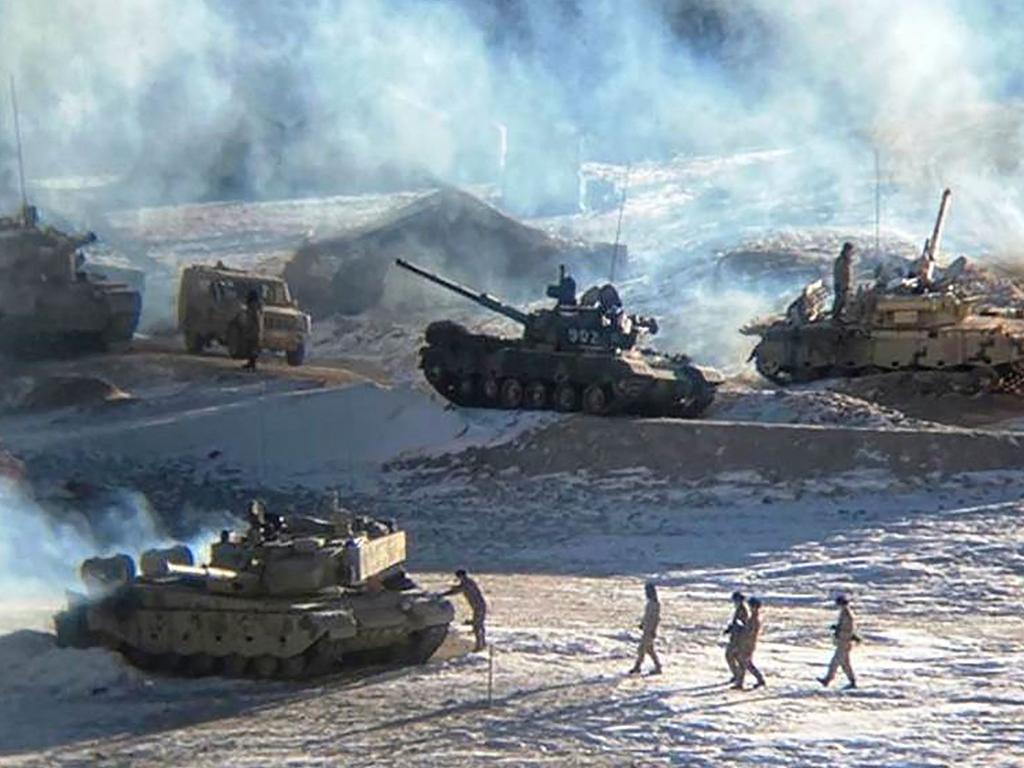 It is the latest in a series of escalations of the 50-year conflict. Picture: Indian Ministry of Defence / AFP.

Several experts believed the clash had occurred some time ago, given the lack of snow on the mountaintops.

“It’s an illustration of how quickly things can go south if tensions are not reduced between the two sides,” Sushant Singh, senior fellow at the Indian Center for Policy Research, told CNN.

China and India fought a border war in 1962. Since then, there have been various agreements to keep peace along the Line of Actual Control but the area is still volatile. The two countries blame each other for the increased tensions and each has poured tens of thousands of extra troops into border zones.

Tensions escalated in 2021 after a border clash in January of that year, when Indian media outlets reported soldiers on both sides had been wounded in hand-to-hand combat along the border of Bhutan, Tibet and Nepal. 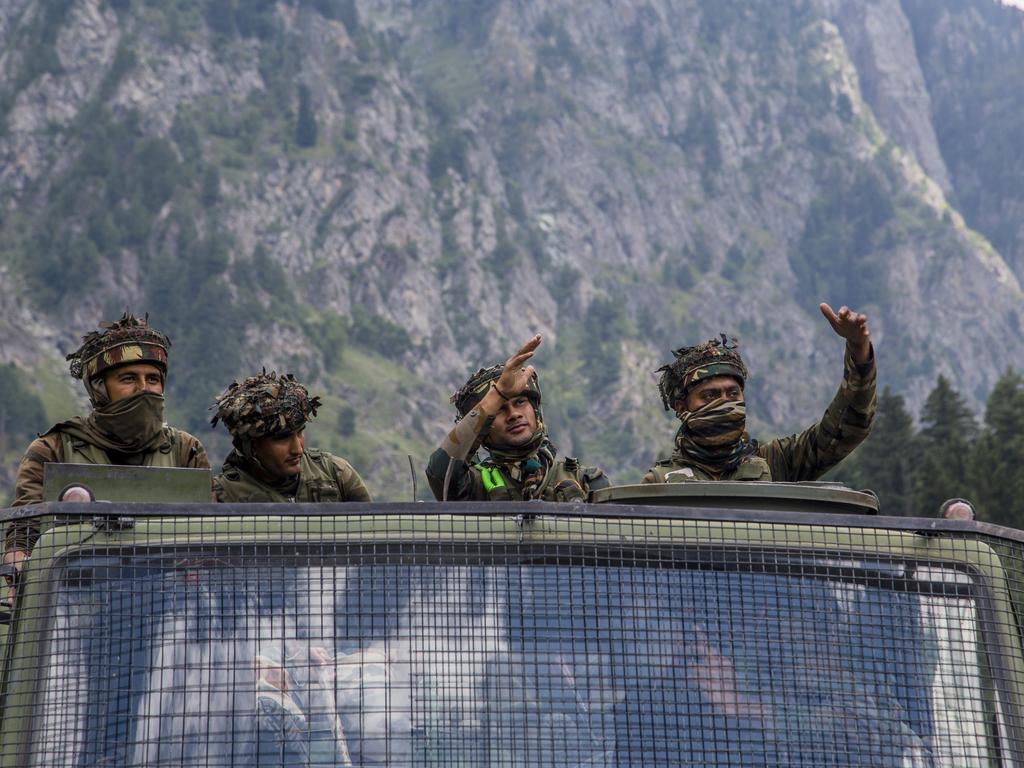 Five Indian and 20 Chinese soldiers were reportedly injured at the time.

India’s Foreign Minister Subrahmanyam Jaishankar said that relations between the neighbours had been “significantly damaged” by the repeated skirmishes leading to the 2021 clash.

Typically, authorities downplay conflict that breaks out along the border. The most recent incident, however, was reported by Indian media.

Experts said it was likely covered as it could be perceived as a win for the Indian side.

Speaking to politicians, India’s defence minister accused Chinese troops of attempting to cross the border, saying they were trying “unilaterally” to change the status quo.

The Chinese military’s Western Theatre Command, on the other hand, accused Indian troops of “illegally” crossing the border. 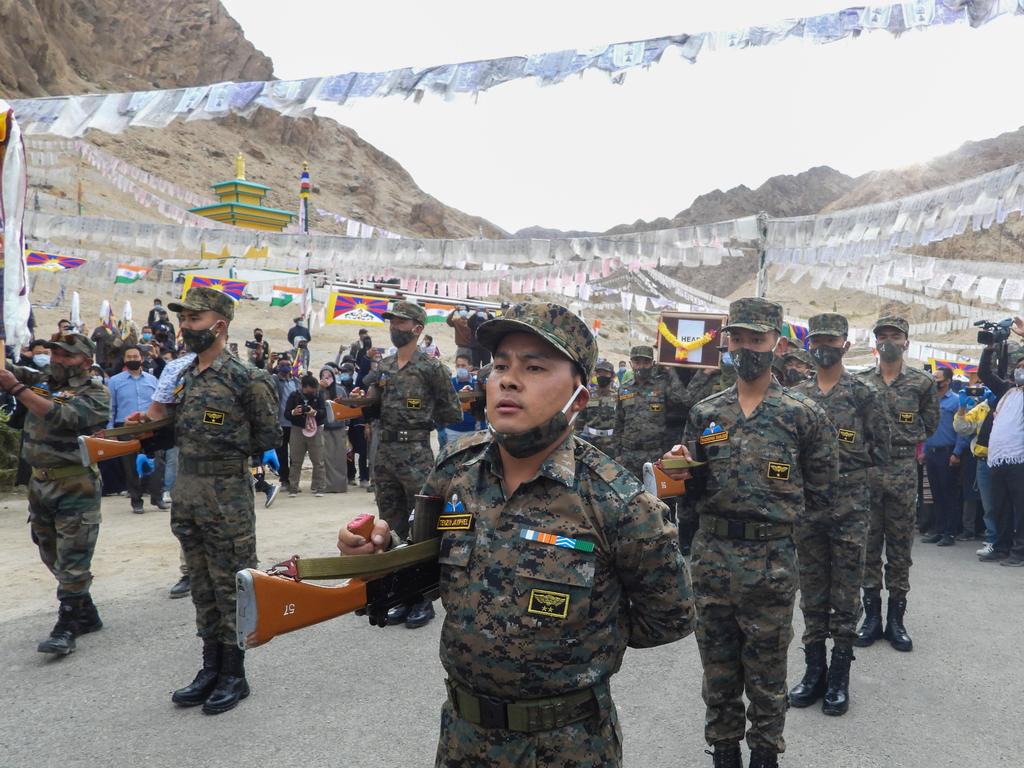 The proximity of the clash to the disputed region of Tibet has raised eyebrows. Picture: Mohd Arhaan Archer / AFP.

The location of the dispute, occurring close to a monastery that is instrumental in Tibetan politics, indicated hostilities over the troubled territory.

China’s relationship with Tibet – which is internationally considered an autonomous region within the People’s Republic of China – has been under scrutiny in recent months, after Russia’s invasion of Ukraine prompted fears that China would begin its own invasion elsewhere.

The Indian government continues to face domestic criticism for not taking a strong enough stance against its superpower neighbour, and the release of the video could be an attempt to allay such concerns, Mr Singh said.