A public swimming pool has received a mixed response after announcing a set of guidelines outlining what it would be accepting as “appropriate swimwear”.

The Marion Outdoor Pool in Adelaide, South Australia, alerted patrons last week to a set of new rules it said would begin being enforced by management.

The centre informed the public via a post to its Facebook page that there were nine types of swimwear it considered acceptable for its facility.

Patrons could wear a “rashie or a sun smart top that is non-transparent”, “board shorts or Speedos”, a “one piece, tankini, swimskirt or modest swimwear” or a “standard bikini”.

The flyer stated that “management reserves the right to remove people from the pool if the above appropriate swimwear rules are not adhered to”.

Response to the announcement was mixed, with a number of people expressing concern that enforcing such stringent rules would turn patrons away.

“You will lose business telling people what to wear! Seriously what is this world coming to?” one response to the pool’s announcement read.

“Who wore what to prompt this post? Feels like we are still living in the 1930s. People should have a freedom of choice,” another said. 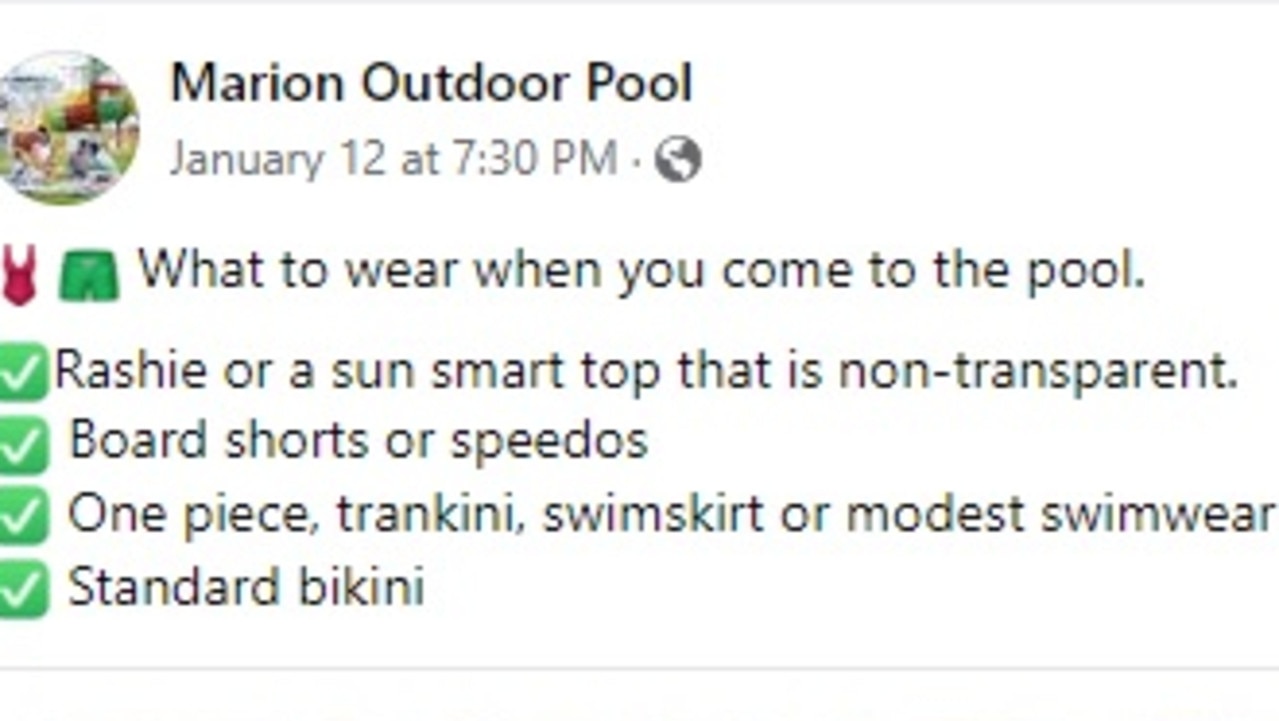 Patrons of a public pool have been warned they will be kicked out if they ignore the facility’s new swimwear requirements.

“Me wearing swimmers at a beach or pool is not harming anyone. Other people telling me what I can wear on my body is harmful,” someone else remarked.

However, many threw their full support behind the guidelines, arguing some swimwear often left nothing to the imagination.

“Guessing those few didn’t see this before they visited today! Brazilian bikini definitely not on the list as appropriate,” one response read. Patrons of a public pool have been warned they will be kicked out if they ignore the facility’s new swimwear requirements.

“I’m guessing too many bottoms on show? Seems to be the trend at the beach at least‍️,” another said.

“I find when I’m swimming laps that women in G string bikinis swimming and climbing in and out of the pool quite disgusting. Just too much info for my eyes,” someone else said.

The rules around the popular Budgy Smuggler didn’t escape criticism.

“I love how they refer to a ‘modesty swimsuit’ for women, as if the Speedo wasn’t the most disturbing thing you’ll see at your local pool,” one comment said.

“Nope, if blokes can get around in Speedos, I can wear my cheeky bikini,” another added.

Marion Outdoor Pool has been contacted by news.com.au for comment.