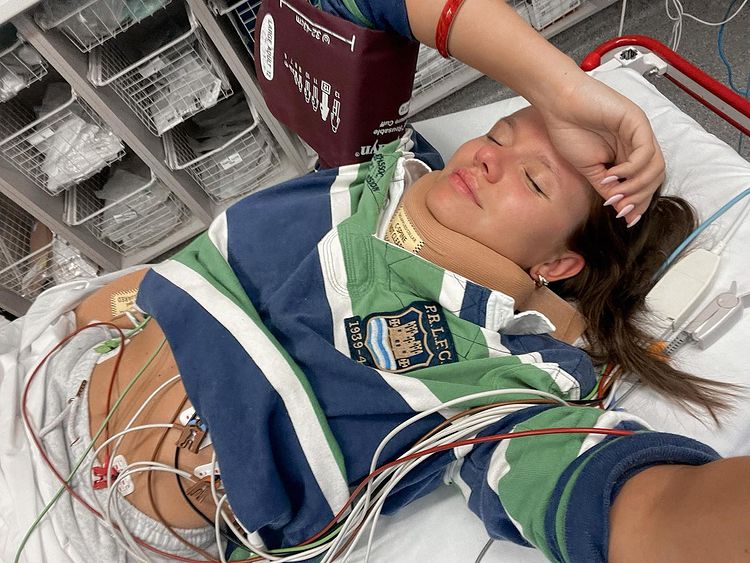 Australian actress Alli Simpson has said she is “extremely lucky to be alive” after breaking her neck while diving into a shallow pool.

She told her Instagram followers she will need to wear a neck brace for the next four months while she recovers.

The model and singer, who is the sister of musician Cody Simpson, also posted a photo from hospital in Queensland.

She said her 2022 was “not off to a great start”, adding that she had also tested positive for Covid-19.

Simpson explained that she had dived “into a shallow pool head first and hit my head on the bottom”.

She underwent various scans and X-rays, and when serious fractures were discovered she was “sent straight to hospital in an ambulance to be assessed by a neurosurgeon”.

Simpson was treated at the Gold Coast University Hospital following the accident, which happened at the end of December.

“No immediate surgery was required and I have been sent home in a hard neck brace that I’ll be living in 24/7 for the next four months as my neck hopefully heals itself,” she wrote.

“I am extremely lucky to be alive and/or not quadriplegic as it JUST missed my spinal cord.”⁣⁣⁣

The actress told her 1.2 million Instagram followers: “The way I see it, four months is a drop in the ocean when it comes to the rest of my happy and healthy life.

“As you can imagine, I have been in endless tears and thanking every guardian angel watching over me in the pool that night plus every moment since.”⁣

She signed off the post with a warning: “Don’t dive into anything when you don’t know its depth!!!!”

Her brother Cody shared her post on his Instagram story, writing: “You’re a miracle. I love you and I am so grateful you are safe.”

Alli Simpson has appeared in the TV series Hacking High School and last year she starred in the teen horror film Death Link.

She has also been a contestant on the Australian version of I’m A Celebrity…Get Me Out Of Here! and was one of the mystery singers in the last series of The Masked Singer Australia.

Simpson has enjoyed success as a singer on streaming platforms since her debut release Why I’m Single in 2013.

Her biggest single, Notice Me, has racked up more than 35 million streams across YouTube and Spotify alone.

After sharing the news of her injury on Tuesday, Simpson said she was “so overwhelmed” by the number of fans offering their support.

“Feeling very loved and lucky,” she wrote on her Instagram story. “I cannot thank every single one of you enough for your kind and thoughtful words.”

She signed off: “Constantly in tears, endless love, Alli.”